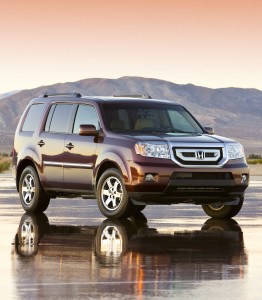 She ? Thanks to high fuel prices and the environmental conscience, the popularity of sport utility vehicles has deflated like a three-day old balloon.? SUV sales, while still significant, don?t have the sparkle they did a few years ago.? However, SUVs are still important people movers and one of the best forms of transportation for areas that have adverse road conditions.

With the resent heavy emphasis on compact cars and crossovers, there had been few SUVs in the press fleets for us to drive.? When the 2010 Honda Pilot arrived at our house recently, it was assigned to make a 400-mile road trip we had to make from our home near Portland, Ore. area to Central Oregon.

He ? In winter months, our drive through the Cascades past Mount Hood to the high desert area of Central Oregon, is usually a ?carry chains? event, but in early autumn it was an exercise of enjoying winding mountain roads and patiently waiting to make quick passes around slow moving traffic.

The new Honda Pilot was well suited for this activity and proved to be much more comfortable and fun to drive than I had remembered from a drive a year earlier.

She ? I can?t give the Pilot high marks for exterior styling, because there?s little to set it apart from competitors and it?s certainly not a head turner.? The interior is more distinctive with a bold dash and controls.? While most of the Honda sedans and coupes have a low unobtrusive dash, the Pilot is more in your face.? It is, however, well designed and organized.? Controls are large, easy to read and the shifter is distinctive being mounted on the center stack, rather than the center console.? Our test vehicle was the top model — the Touring edition with the tech package, which includes what I think, is one of best navigation system in the business.? The large screen is mounted about the same level as the top of the steering wheel, making it easy for the driver to glance right to see the maps.

Honda is one of the cars that allows inputs to be done while the vehicle is moving.? While that can be a little dangerous for the driver to do, it is very convenient for the front seat passenger to be able to enter destinations or look for points of interest (i.e. rest rooms, gas stations, etc.) without having to pull to the side of the road.? Honda also has an excellent voice activation system, which includes 832 commands to control most audio, climate and navigation features by saying the right words.? We have had better luck talking to this system than many of the others, but learning the commands is akin to learning a new language.? The navigation system, with a backup camera, is only available, and is standard equipment on the Touring model.

He ? The Pilot is well equipped for highway driving riding on a stiff unibody platform and sophisticated independent suspension at both ends.? In standard trim, the Pilot is a front-wheel drive, but to make it a real SUV it needs the Variable Torque Management four-wheel drive (VTM-4).? This full time system gives excellent traction and control in all weather conditions, plus works well off-road under medium level conditions.? That mean no climbing over rocks and fallen trees, but it provides anything the average driver may need including the ability to ford water up to 19-inches deep. ?Pilot even has hill start assist and a lock function on the four-wheel drive to deliver maximum traction at low speeds.

A 250-hp, 3.5-liter V-6 engine with five-speed automatic transmission powers the Pilot.? The engine has Variable Cylinder Management, which switches between six-, four- and three cylinder modes to maximize fuel economy with top-level performance.? The EPA rates the 4WD version, which we drove, at 16 mpg city and 22 mpg highway and one mpg better for the 2WD models.? I averaged 18.3 mpg driving on our road trip; however, I did speed a little? 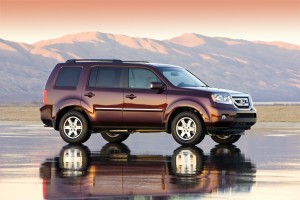 She ? I like the way Honda prices vehicles.? Rather than starting with a low price and then offering dozens of options, Honda offers four trim levels, LX, EX, EX-L and Touring in a choice of FWD or 4WD, which adds $1,600.? The EX and Touring models have an available rear entertainment package, which also adds $1,600.? The LX FWD starts at $28,605 including the destination charge.? The Touring model, which includes navigation, with the 4WD and entertainment system lists for $40,955.? Other than interior and exterior colors, that?s all the choices a buyer has to make.

He ? The Honda Pilot drives very well, with good throttle response, accurate steering and strong brakes.? It tends to have a little body lean during harder cornering, but still feels controlled.? The passing power was good for a 4,600-pound vehicle with a V-6 engine, and I was surprised by how fast the speed climbs on long multicar passes.

Passengers are very well treated with soft, yet supportive seats, a roomy interior and an abundance of storage areas in the doors.? Access to the third row for eight-passenger seating was easy with the second row folding system.? Cargo space is 18.0 cubic feet with all three rows of seats in place.? It expands to 47.7 cu. ft. when the third row is stowed and 87.0 cu. ft. with both rear rows folded.

She ? I am a stickler for comfort, and the Pilot exceeded my expectations with excellent heated seats in the front and abundant space.? The level of noise was also much lower than I expected thanks to the Active Noise Control and Active Control Engine Mount systems.

Overall, the Honda Pilot is a good choice for any SUV shopping list.

He ? The Honda Pilot gets high marks from me too.? It?s hard to beat the good build quality and advanced technology.? It is very enjoyable to drive and is an excellent value. 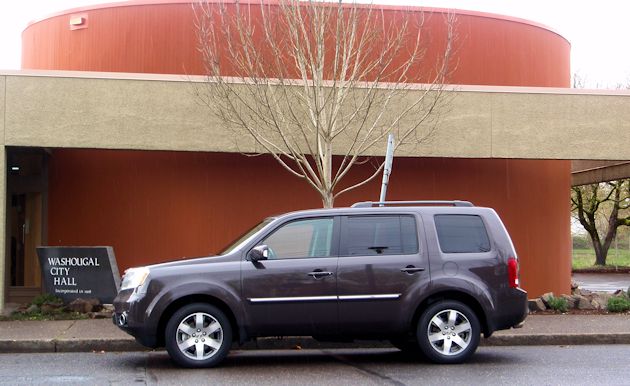