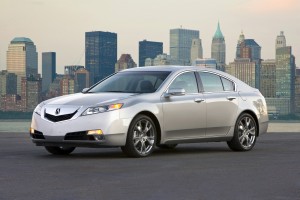 She ? I had never thought about the Acura TL as having an overly distinctive design until we took the new version on a trip to the Oregon Coast a few weeks ago.? Several times in a two-day period, while we were at our time-share, people came by when were near the TL and commented on how nice it looked.? ?Is that the latest model?? one woman asked, ?It looks terrific!?

All new in 2009, the TL was designed at Acura?s Southern California design studio and features the company?s somewhat controversial new grille treatment, which looks something like a broad happy face mouth carved in a pumpkin using a series of straight lines.? I have to say, that the look is starting to grow on me, and no other car has anything like it.

The rest of the body has strong character lines and the sweeping roofline that is in vogue with many of the sedan designers.? Equally distinctive, but a little more mainstream, the rear has several broad ?V? shapes with elegant LED taillights and quad tailpipe outlets.

He ? With its comfortable ride, abundance of features, respectable performance and technology the Acura TL has always ranked high on my list of cars to recommend.? However, it always fell a little short when it came to performance and handling.? This is partially due to the front-wheel drive system.? As good as it is, it does not quite compare with a good rear-drive configuration or an all-wheel drive.

That is no longer the case.? Acura has climbed up a big notch in my rankings with the addition of an available all-wheel drive (AWD) system, and it?s even a step up from some other AWD systems with its state of the art Super Handling All-Wheel Drive (SH-AWD?), which not only transfers torque from front to rear axles, but from side to side in the rear.? As the name implies, the system allocates more power to the outside wheels in corners, helping the TL turn more quickly and accurately.

This feature alone takes the TL to an exciting new level of handling capabilities. 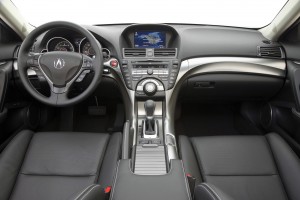 She ? The TL?s all new larger interior has a sculpted look with crisp lines in the brushed aluminum-look accents.? Individual seating compartments in front emphasize the space Acura refers to as a ?dual personal? layout.? The instrument cluster is housed under a broad shell-like canopy and another smaller visor shades the large center mounted display screen.? A cluster of large and well-organized audio, climate and navigation controls are mounted high on the center stack.

I especially like the large, plush seats.? They were very comfortable on our three-hour drive to the coast.?? Checking out the rear seats, I was pleasantly surprised by the roomy space and equally comfortable seat, which is designed for three, but sit two comfortably.

Our car had the Technology option, which adds a fantastic ELS Surround sound system with DVD-audio, XM Satellite Radio and a 12.7 GB hard drive system.? It also includes one of our favorite navigation systems, which is upgraded this year to include real-time traffic and weather reports.? This was especially helpful when we came through Portland on our way home and were able to skirt congested traffic areas.? The system can be controlled by voice-activation, but it never quite seems to understand what we say. ?People who buy this car and learn the proper voice activation phrasing, while letting the system adjust to your voice, will really appreciate the convenience.

He ? Acura?s beautiful VTEC V-6 engine is now up to 3.7-liters and 305-hp for the SH-AWD version.? The well-equipped base mode has a 280-hp 3.5-liter V-6.? I am surprised Acura still uses a five-speed automatic transmission for this car, but it works well especially with the F1-style wheel-mounted shifters.?? We averaged 23.1 mpg on the trip, and I imagine a six- or seven-speed automatic transmission might bump the fuel economy and performance but a notch or two.? The EPA rates the AWD TL at 17 mpg city and 25 mpg highway. ?Zero to 60 mph takes only 5.9 seconds, and the top track speed is limited to 130 mph.

I wish I had the opportunity to drive the SH-AWD on something other than dry pavement to get a better feel for the handling characteristics.? The one thing I did notice was the car tends to drift, even when holding the wheel straight on freshly paved highway.? She pointed it out first when she thought I wasn?t holding the wheel steady. ?I wondered if the alignment might need checking?? Other than that anomaly, the TL seemed to handle nicely.

She ? I have always liked the Acura TL.? I especially appreciate the great value and high content level, which make it one of the best-equipped cars in the industry.? With standard features like leather seating, HID lighting, all power, and dozens of other comfort and safety features, the TL is easily a top value.? Consumer Reports also lists it as ?recommended? buy.? Pricing starts at $35,765 for the ?base? version and $39,315 for the SH-AWD with the larger engine.? The technology package with the navigation system and several other enhancements adds $3,730 to either version. 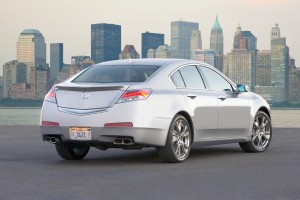 He ? The TL is larger and heavier than competitors like the Audi A4, BMW 328i and Infiniti G37, but that translates into a good comfortable ride and the most spacious interior.

Structurally the TL is much more rigid with substantial upgrades to the floor pan and frame rails.? These changes not only make the TL stronger, but also safer in a crash.

She ? Our road trip to the coast in the TL was quiet, comfortable.? I am impressed with the new head turning styling, too.

He ? The TL has made some serious improvements with the new 3.7-liter engine and the SH-AWD, but it still falls just a little short of the capabilities of some of the tough competitors.? If you are one of the five percent that pushes your car to the limits, the TL may not be the best choice.? On the other hand, if you want a car that is stylish, comfortable and fun to drive sport sedan, the TL is a very good choice. 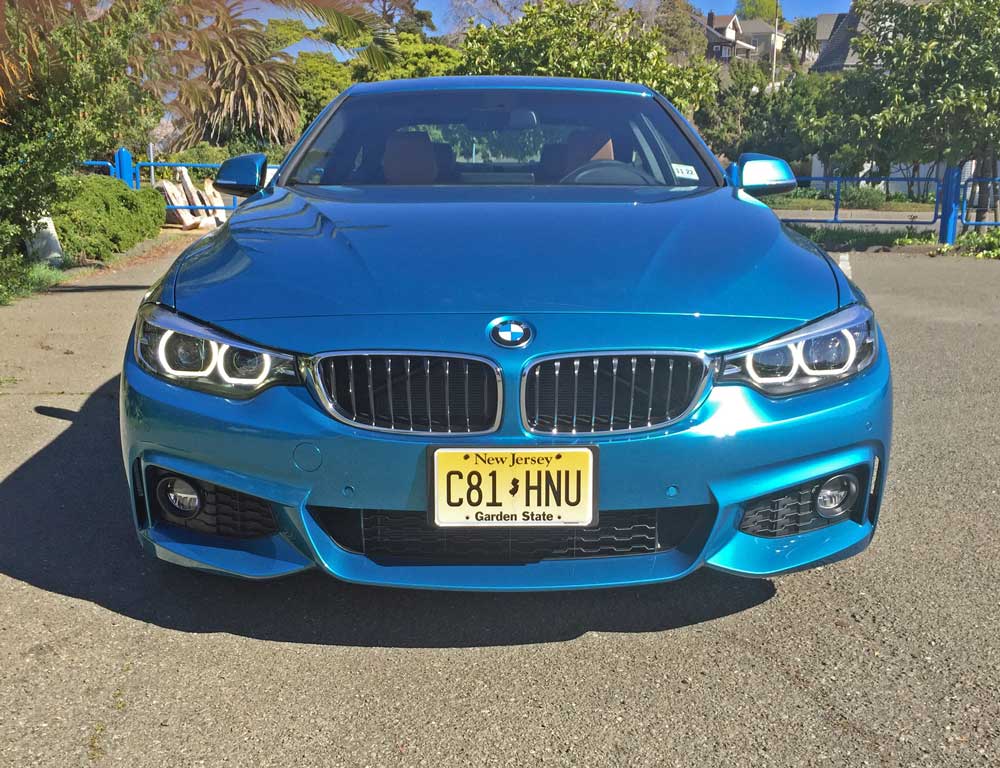