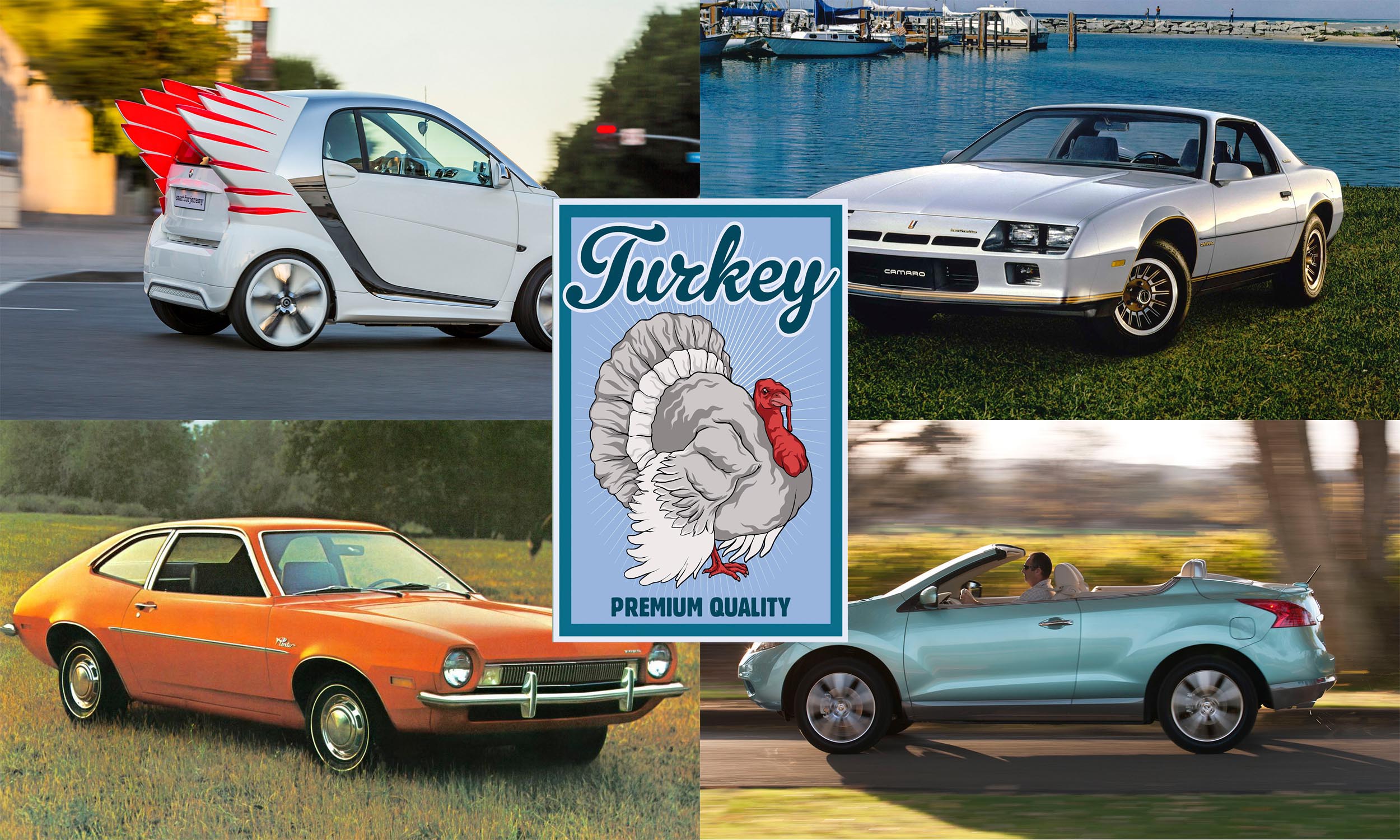 Thankless Birds
For many Americans, Thanksgiving is the greatest holiday of the year: a day dedicated to family, food and football. It’s also a day to take time out and appreciate the good things in our lives. But we’re not the only ones who put out a turkey. Over the years, most carmakers suffer the occasional miss — a model that came along at the wrong time, is somehow flawed, or is unattractive in a way that it’s outright rejected by the market. As we approach Thanksgiving, let’s observe some of these “turkeys” in automotive history, and see why automakers might have been less than thankful for them. 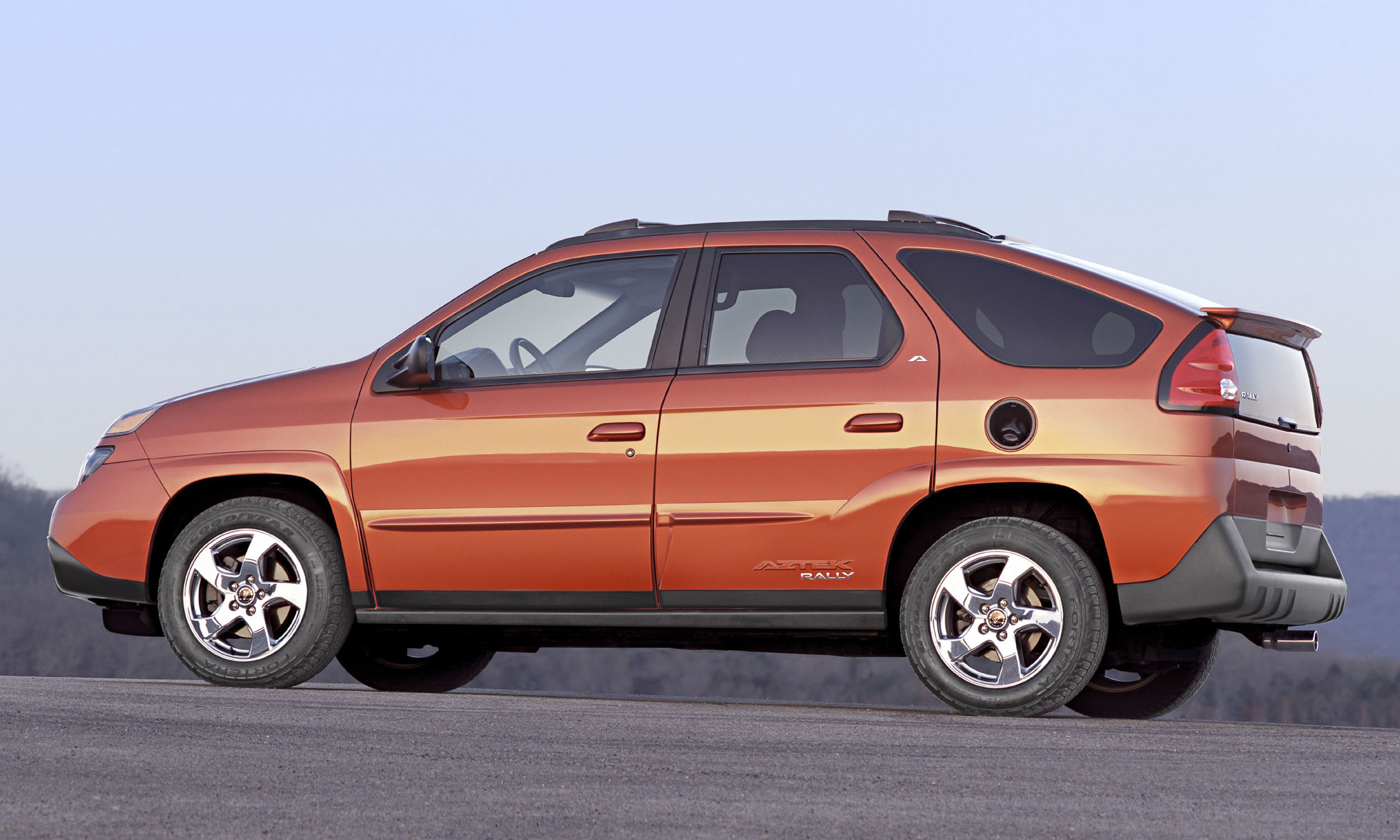 Pontiac Aztek
A target in the bunch so easy that we feel bad hitting it, the Aztek cannot be left out of a list such as this. An interesting 1999 Aztek concept was revised, picked over, added to and tweaked. Debuting in 2001, it was plainly a camel (that is, a horse drawn by committee), and survived through the 2005 model year. The “Breaking Bad” TV series led to a bit of a renaissance for Aztek, as people discover the surprisingly useful crossover under a body that has landed it on innumerable “Ugliest Cars Ever” lists. 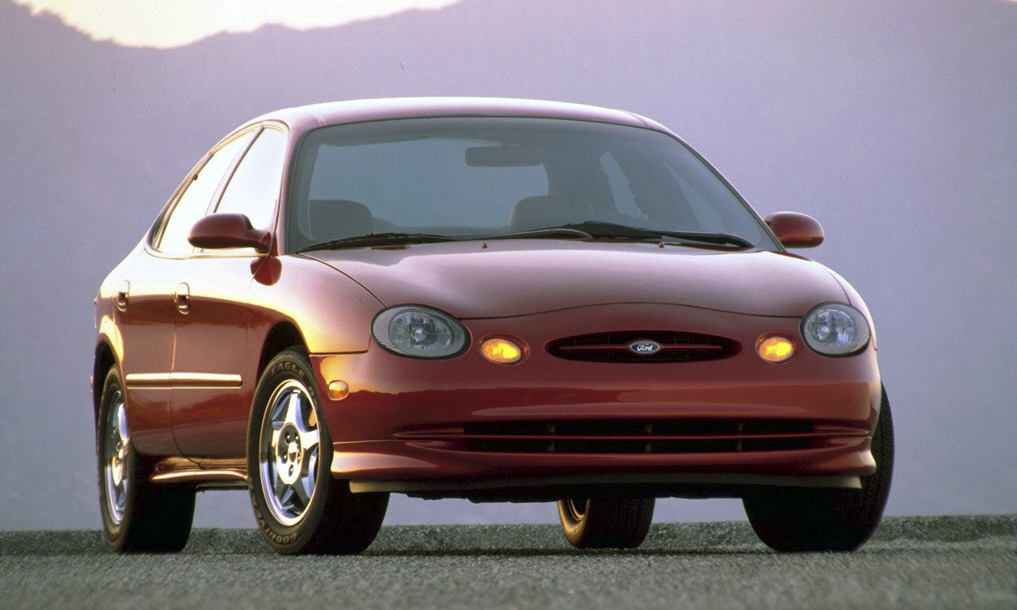 Ford Taurus (3rd generation)
The Ford Taurus could do no wrong through its first two iterations: It was the leading American family sedan, and could perennially be found near the top of sales charts. That changed with the introduction of the third-generation Taurus in 1996. It looked like someone had left a 1:1 scale ice sculpture of the car out in the Arizona sun for a few hours. Despite being a solid package and offering the only V8 to see duty in the Taurus SHO, the third-generation Taurus could not overcome its looks. 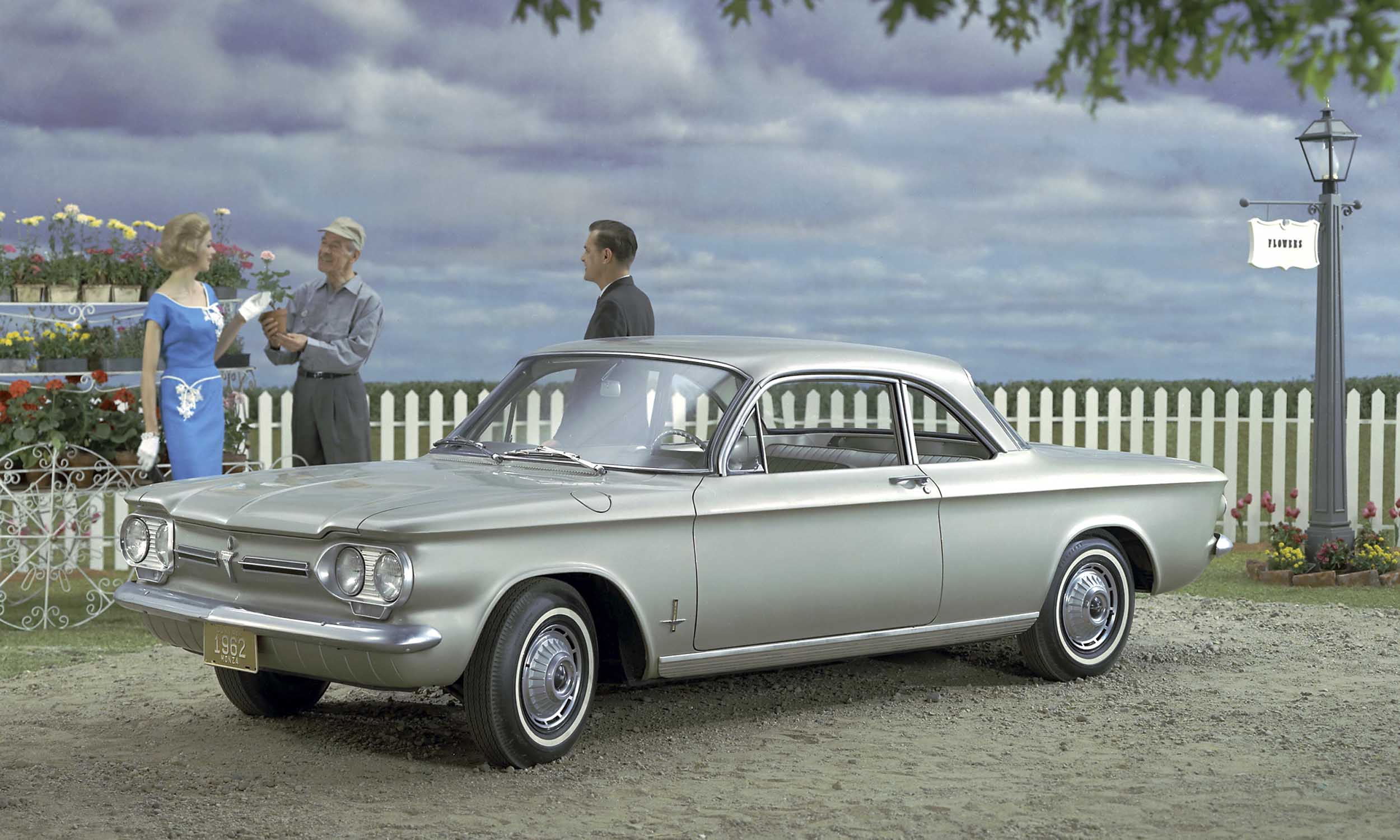 Chevrolet Corvair
The Corvair was intended as an American response to the influx of affordable, stylish European imports — the Volkswagen Beetle in particular. Like the Beetle, the Corvair has a rear engine. Unlike the Beetle, the Corvair’s rear suspension wasn’t sufficient and a number of crashes led to Ralph Nader’s book “Unsafe at Any Speed,” and it pushed most auto builders away from rear-engine setups for good. 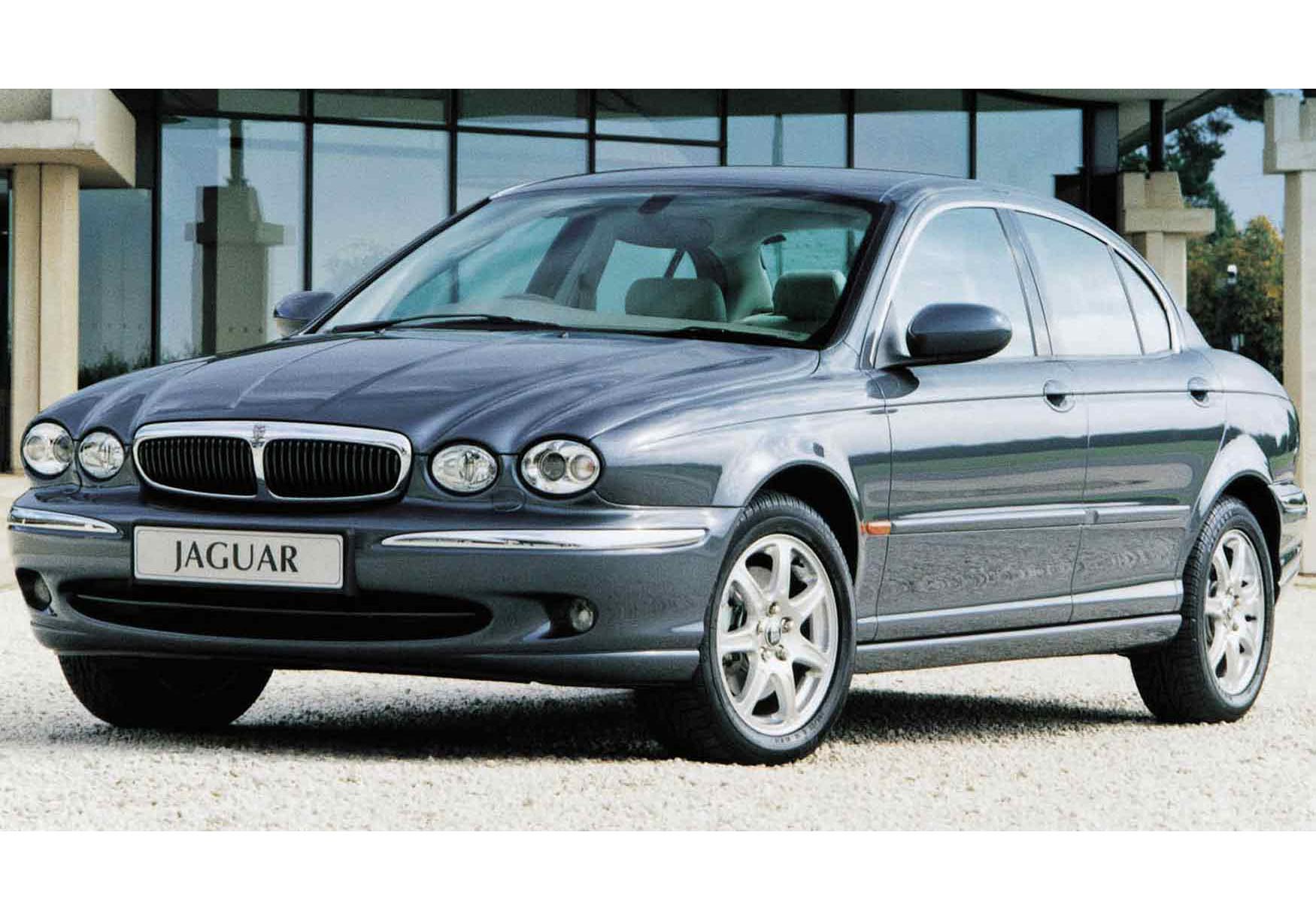 2001-2009 Jaguar X-Type
The Jaguar X-Type looked the part: a classy entry-level luxury sedan to compete with the best of Germany and Japan. Unfortunately, the X-Type’s Ford Contour underpinnings betrayed it. Was it an objectively bad vehicle? That’s debatable. But even those who bought the X-Type felt it didn’t live up to the standards of the segment, nor the expectations riding on the Jaguar badge. 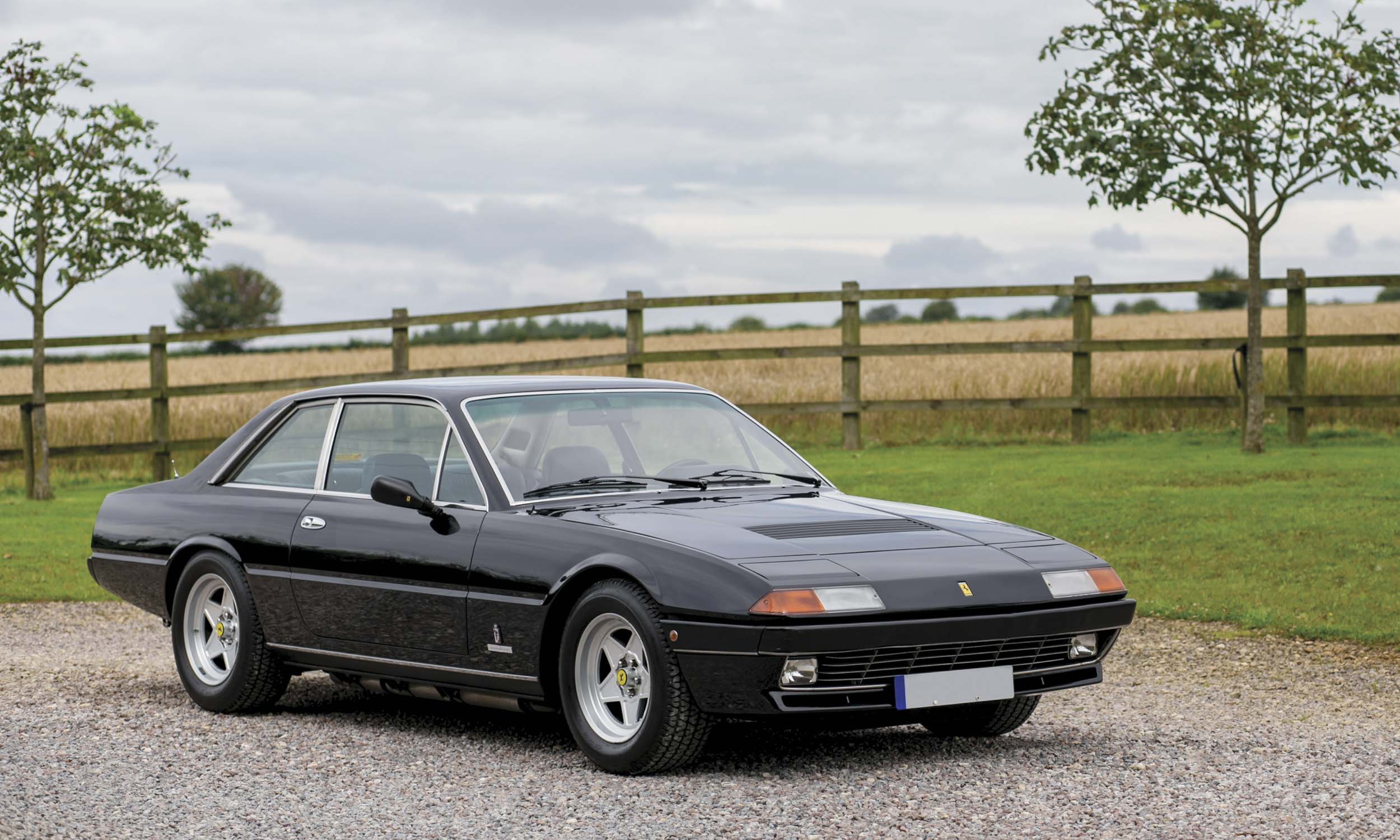 Ferrari 400i
The Ferrari 400i would probably be held in more regard had any other manufacturer built it; it may even be somewhat beloved. As it is, the 400i is better known today for carrying the first automatic transmission in a production Ferrari. It’s also one of the least “Ferrari-looking“ Ferraris ever — at least if you tilt your head at a Mondial and squint, you might trick yourself into thinking you’re at something cool. There’s a recent effort to cast the 400i as collectible; if you must, find a model with the 5-speed manual. 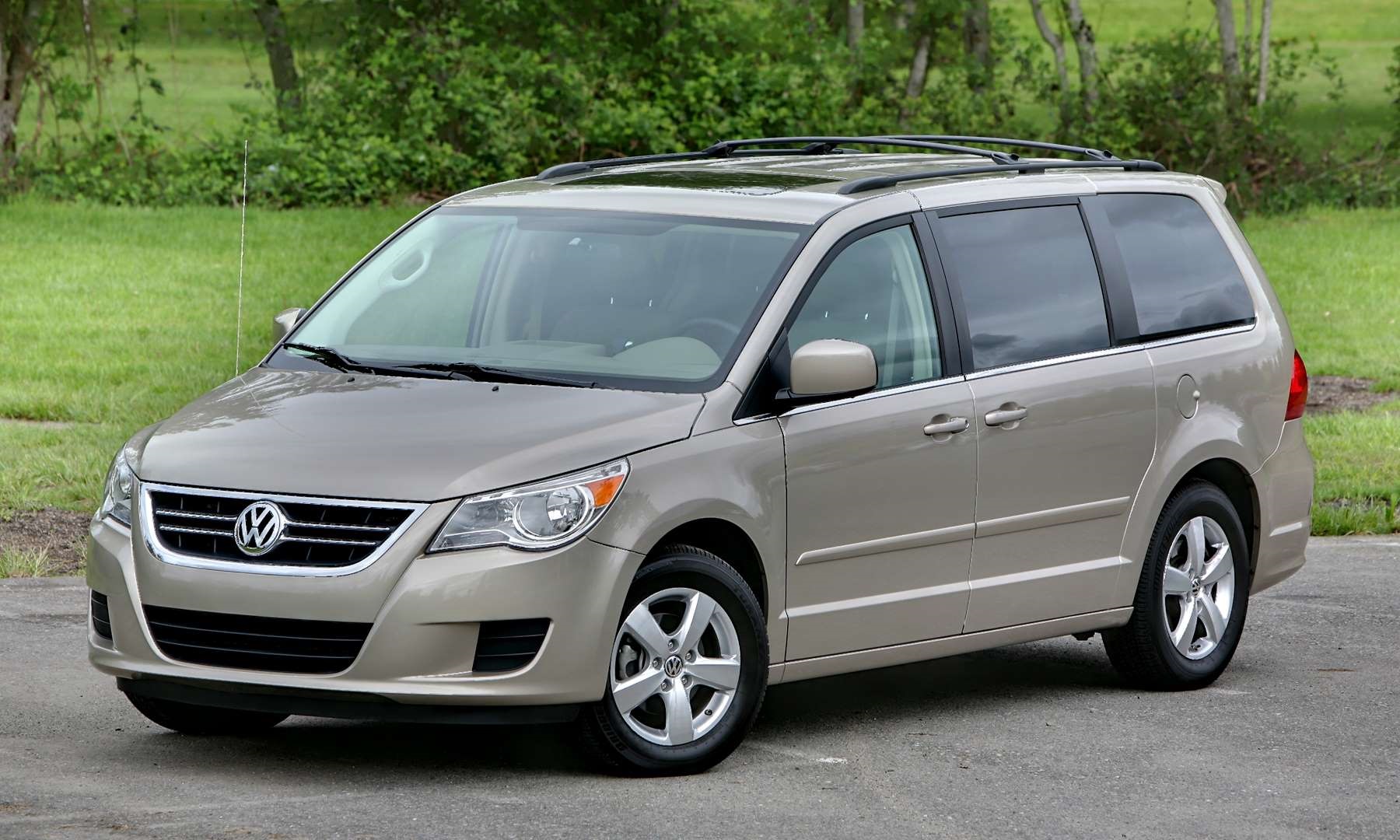 Volkswagen Routan
The Routan was essentially a rebadged Chrysler Town & Country minivan. Although Volkswagen makes and sells well-built, super-efficient vans in Europe, American buyers were left to buy a Chrysler product with a German badge on the grille. It’s not entirely Volkswagen’s fault though. America has some strange tax rules when it comes to importing trucks and vans, and it was just easier for the company to make a deal with the Pentastar than to jump through U.S. legislative hoops. Then again it’s not the worst mistake VW has made, after all . . . 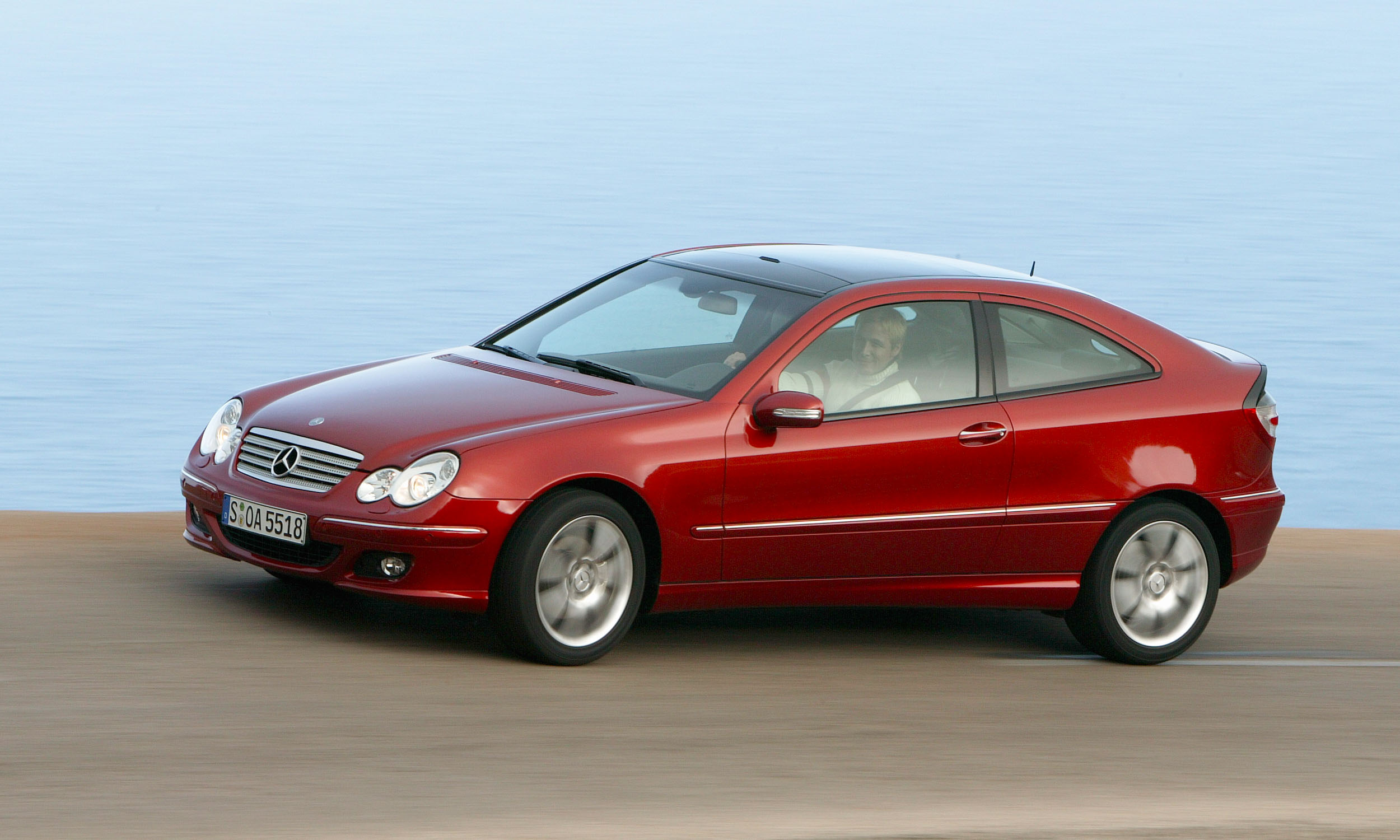 Mercedes-Benz C230 hatchback
In its heyday — if one may call it that — the 2000–2007 Mercedes-Benz C230 hatchback was a curious thing. In theory it was a smart way to present a more practical and affordable avenue into Mercedes ownership — sort of a proto A-Class. However, placing a Mercedes in the same segment as Volkswagen’s Golf and Ford’s Focus made it seem out of place, not to mention overpriced. We’ll give it this: A C230 hatchback still turns heads today, even if not always for the right reasons. 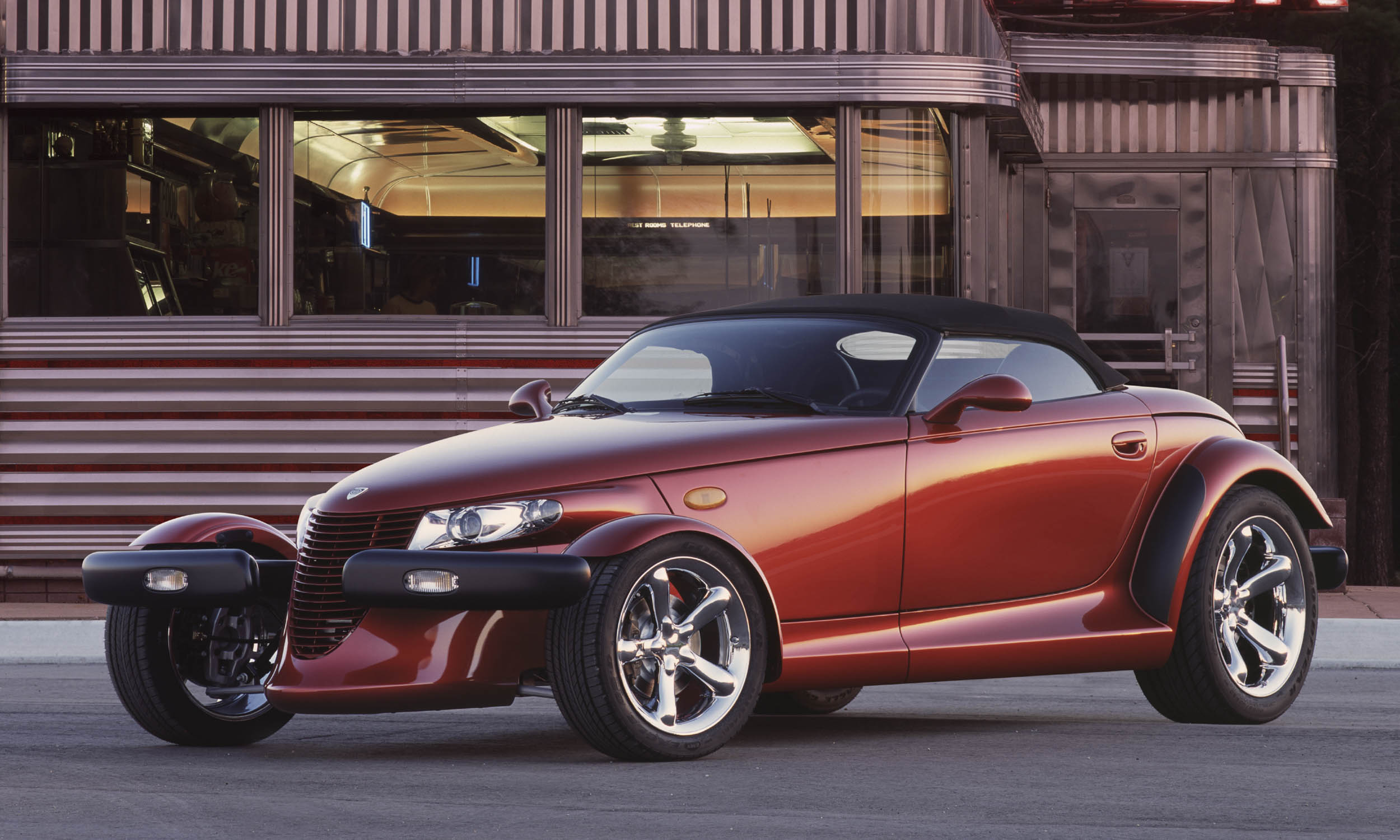 Plymouth Prowler
Plymouth’s Prowler should have been great; it had all the potential in the world. Sure, there was some controversy over its design being heavily borrowed from a car by hot-rod customizer Chip Foose; but if it could have delivered performance commensurate to its image, the world likely would have forgiven any sins. Instead, the Prowler came with no manual transmission and an anemic 250-horsepower V6. The world looked, yawned and moved on. 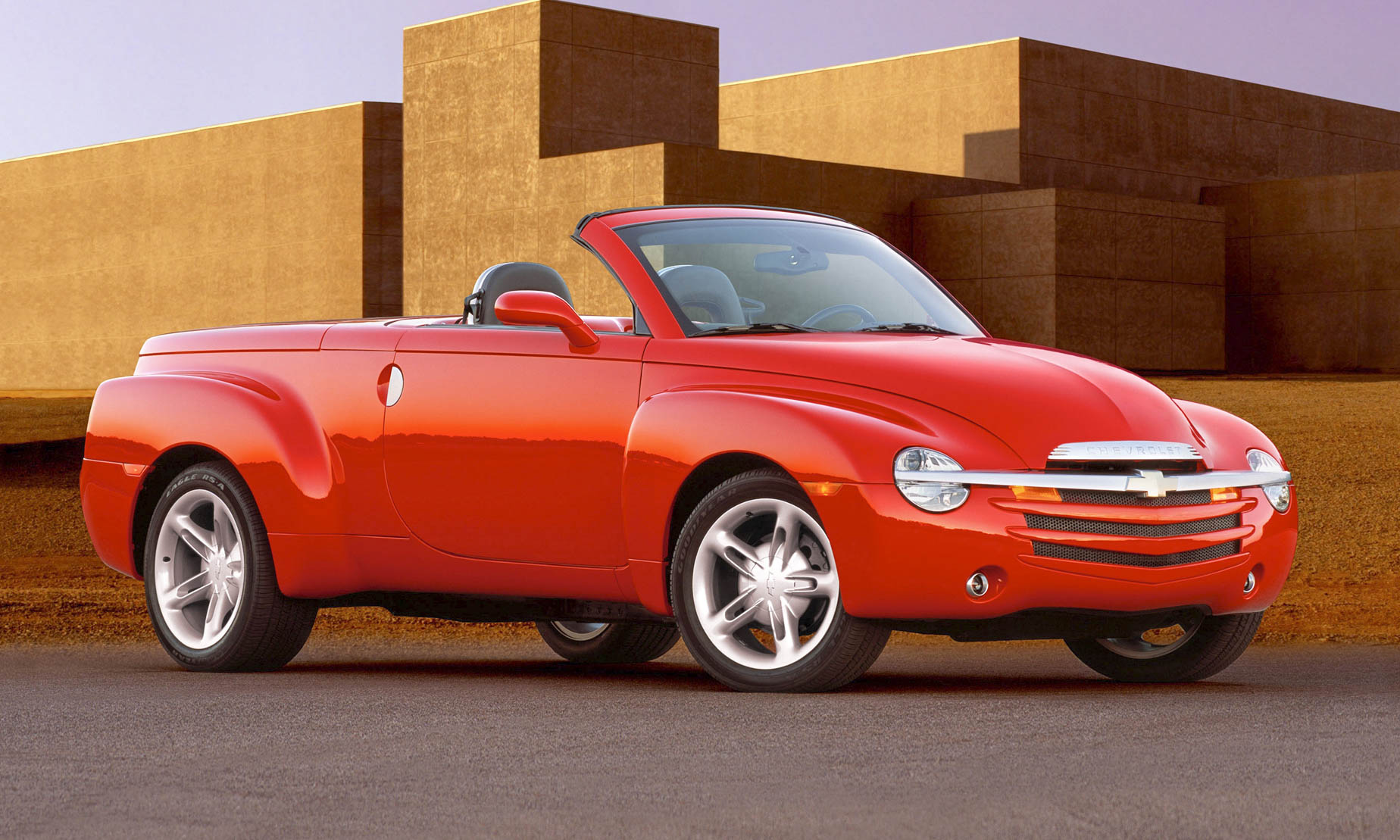 Chevrolet SSR
Set loose upon the world for the 2003 model year, the SSR nailed the “cool retro-rod” and “What the #*@! is that?” looks with its unique pickup. Unfortunately, like the Plymouth Prowler, the SSR’s performance underwhelmed, hurting its chances beyond simply being the answer to a question no one was going to ask. To their credit, for the last two years of the SSR’s run Chevrolet added its LR2 V8 engine and a manual transmission as options, but it was too little too late. 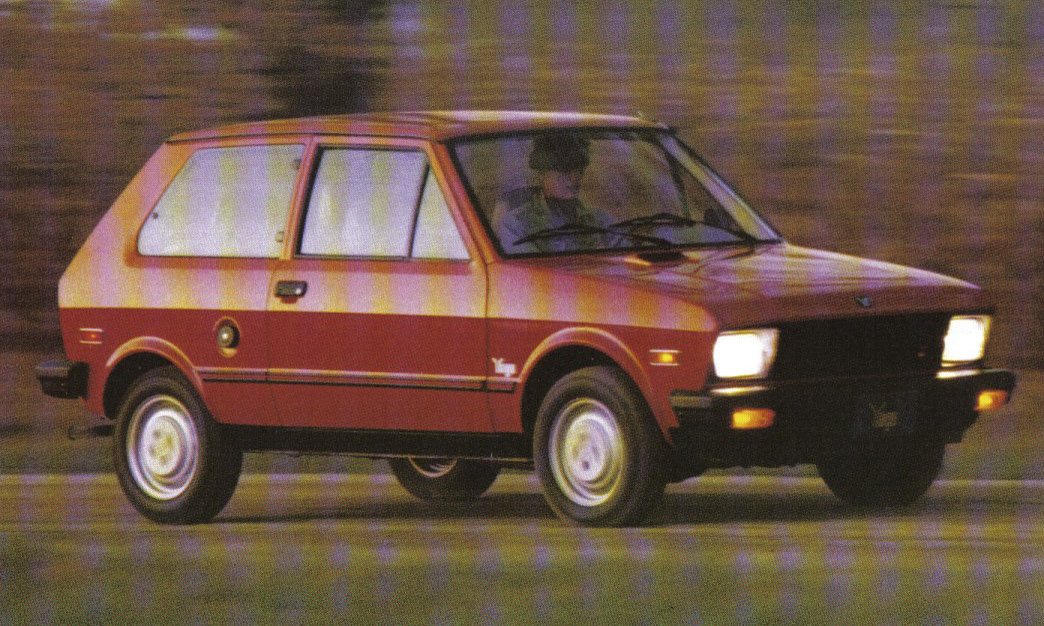 Yugo
The promise of the Yugo was a Volkswagen Beetle for the 1980s — cheap, basic transportation. The Americans who bought it got a shoddily-built ugly little box that was as miserable to own as it was to drive. Yugo almost instantly entered the American lexicon as a synonym for lemon, and remained there for decades. 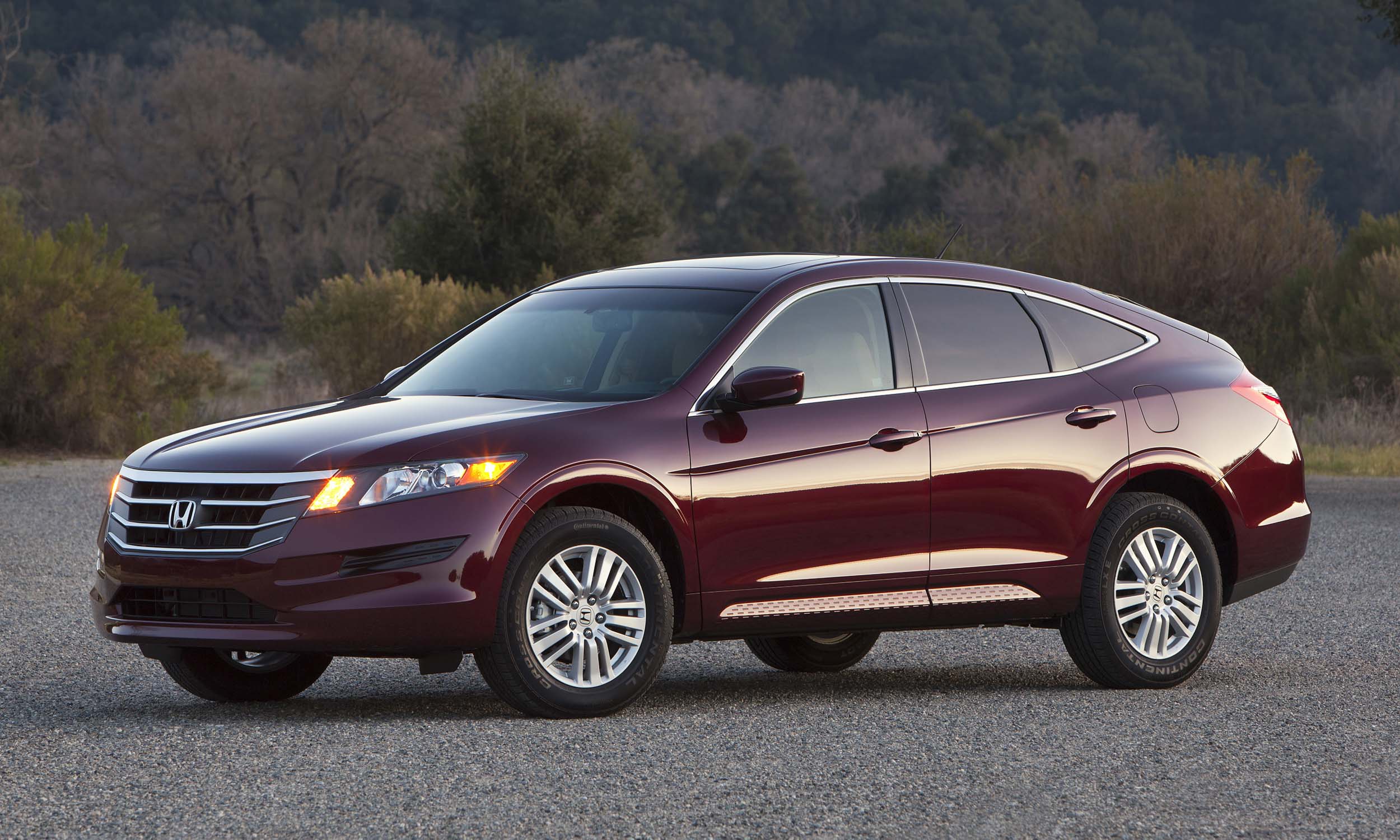 Honda Crosstour
At a time when Honda sold a great-driving, gorgeous-looking Accord Wagon all over the world, America was left to choke down the funky-looking Accord Crosstour. Along with its unsettled design language, the Crosstour delivers lackluster cargo capability, thanks to a pair of massive shock towers that jut into the interior. The crossover makes the company’s Odyssey minivan look even better than it did before; maybe that was the plan all along. 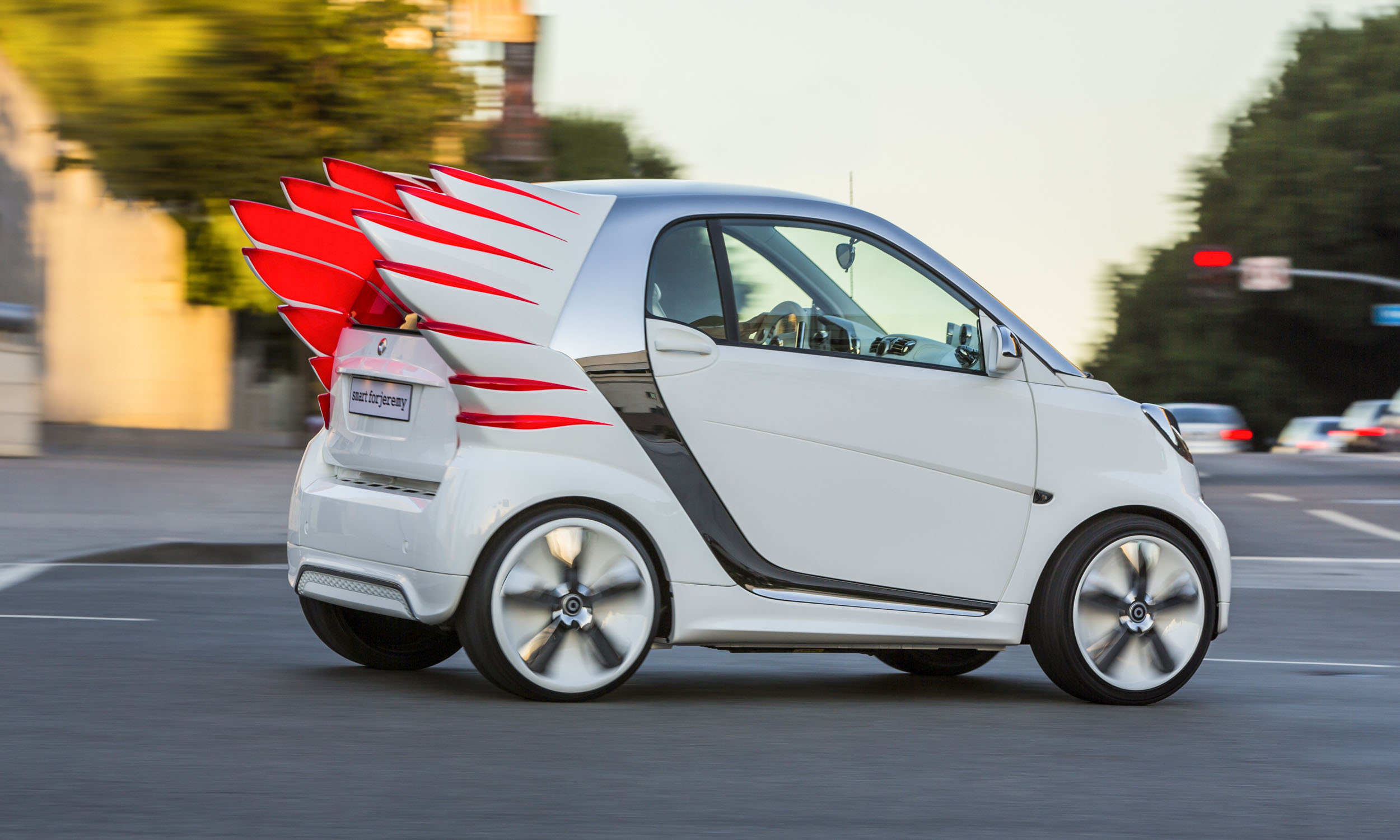 smart forjeremy
Let’s try to associate a couple words with Daimler’s smart car: “Cool.” “Interesting.” “Desirable.” Okay then — you see the problem, right? So, what’s smart to do? Well, what smart did was enlist designer-to-the-stars Jeremy Ross to create a concept version of the smart fortwo for the 2012 Los Angeles Auto Show. The result was the swanlike and literally winged forjeremy. The ugly duckling as a concept would have been enough for most automakers, but smart actually put the forjeremy into production. 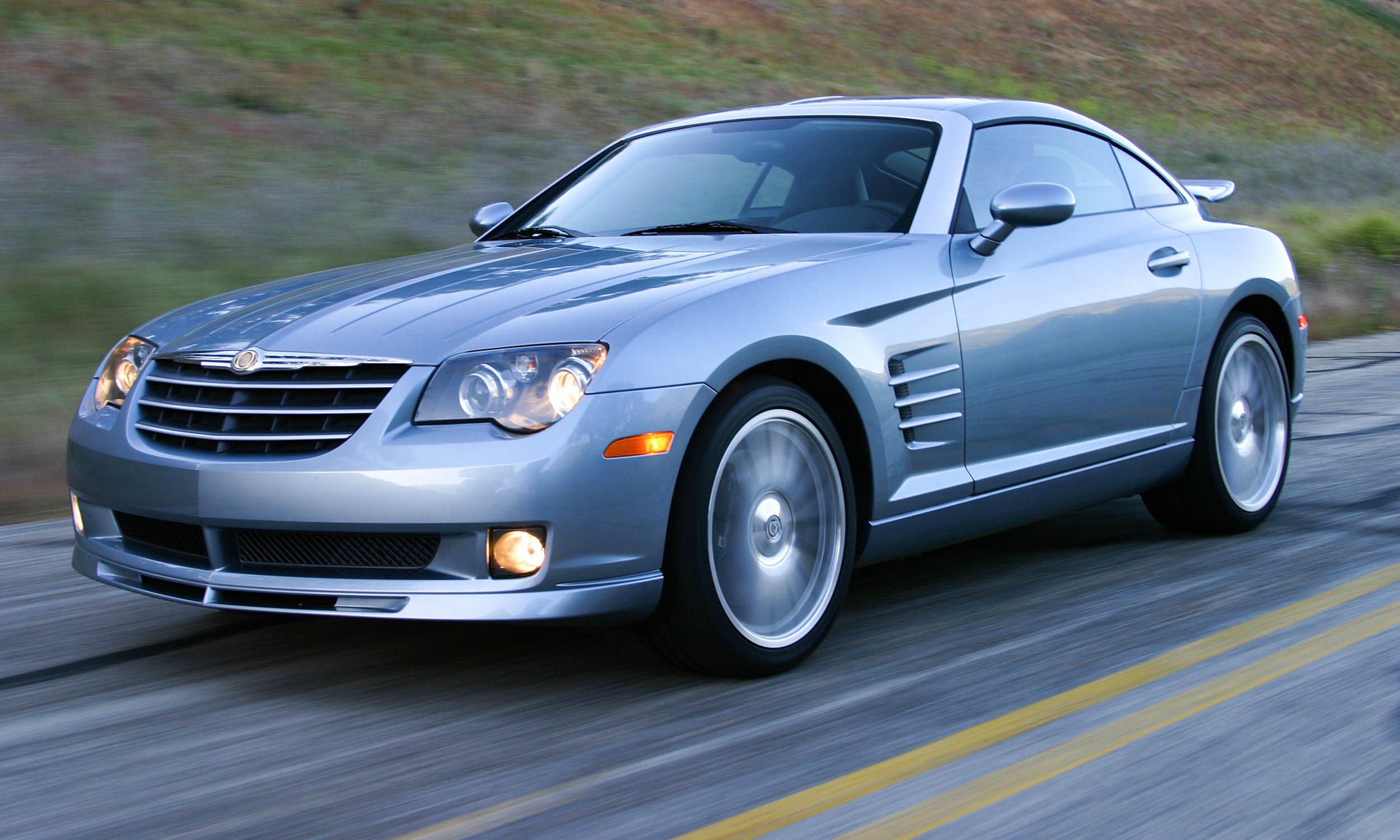 Chrysler Crossfire
On paper, the Chrysler Crossfire sure seemed like a good idea. A product of the DaimlerChrysler merger, the Crossfire was a coupe based on the Mercedes SLK chassis promising performance and a touch of luxury at an affordable price. What ended up hitting the road was a parts-bin special with so-so performance that looked like someone had cut a Plymouth Prowler and a Mercedes in half, glued the Mercedes front end to the Prowler rear and said “Okay, done.” 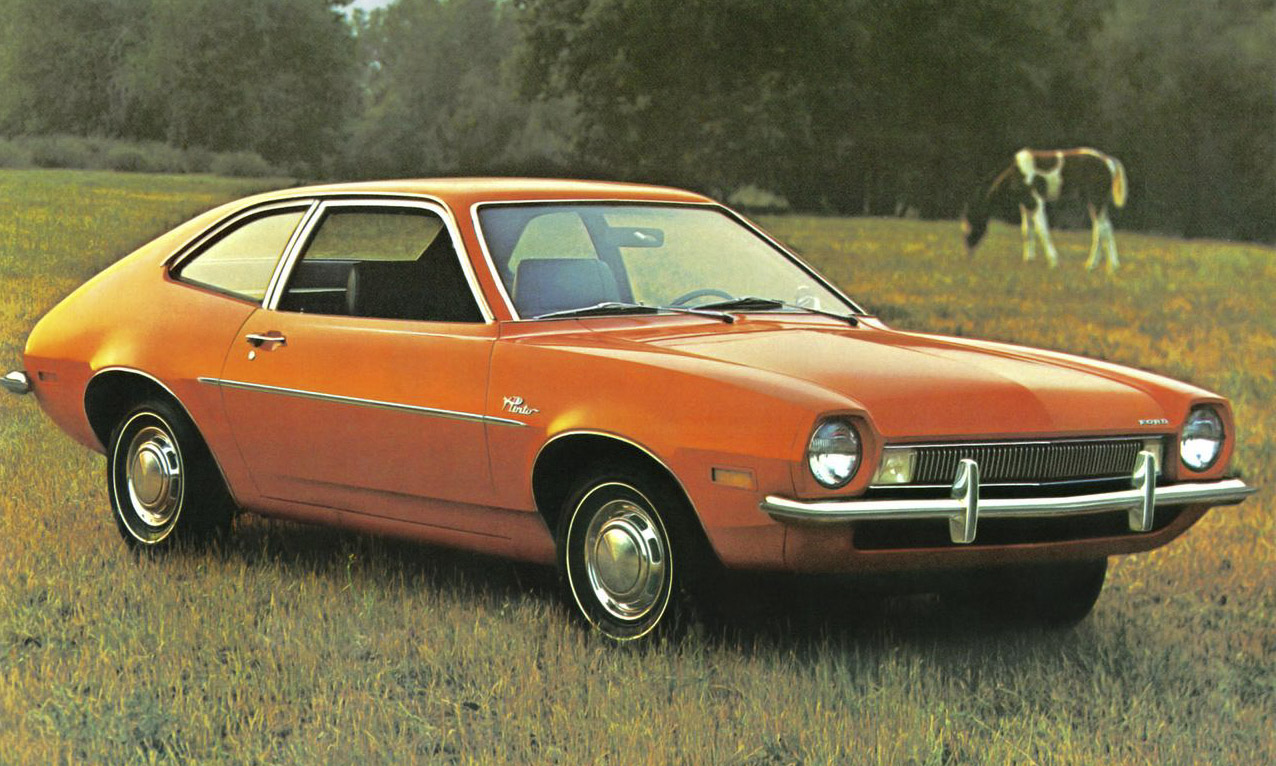 Ford Pinto
One of the all-time automotive turkeys, the poor little Ford Pinto could have simply gone down in history as a depressing, unreliable Malaise Era rolling metaphor. Then we discovered what could happen if one was rear-ended. Hint: Type the words fry, turkey and disaster into a search engine, check out the results and the Pinto becomes the avatar for automotive failure. 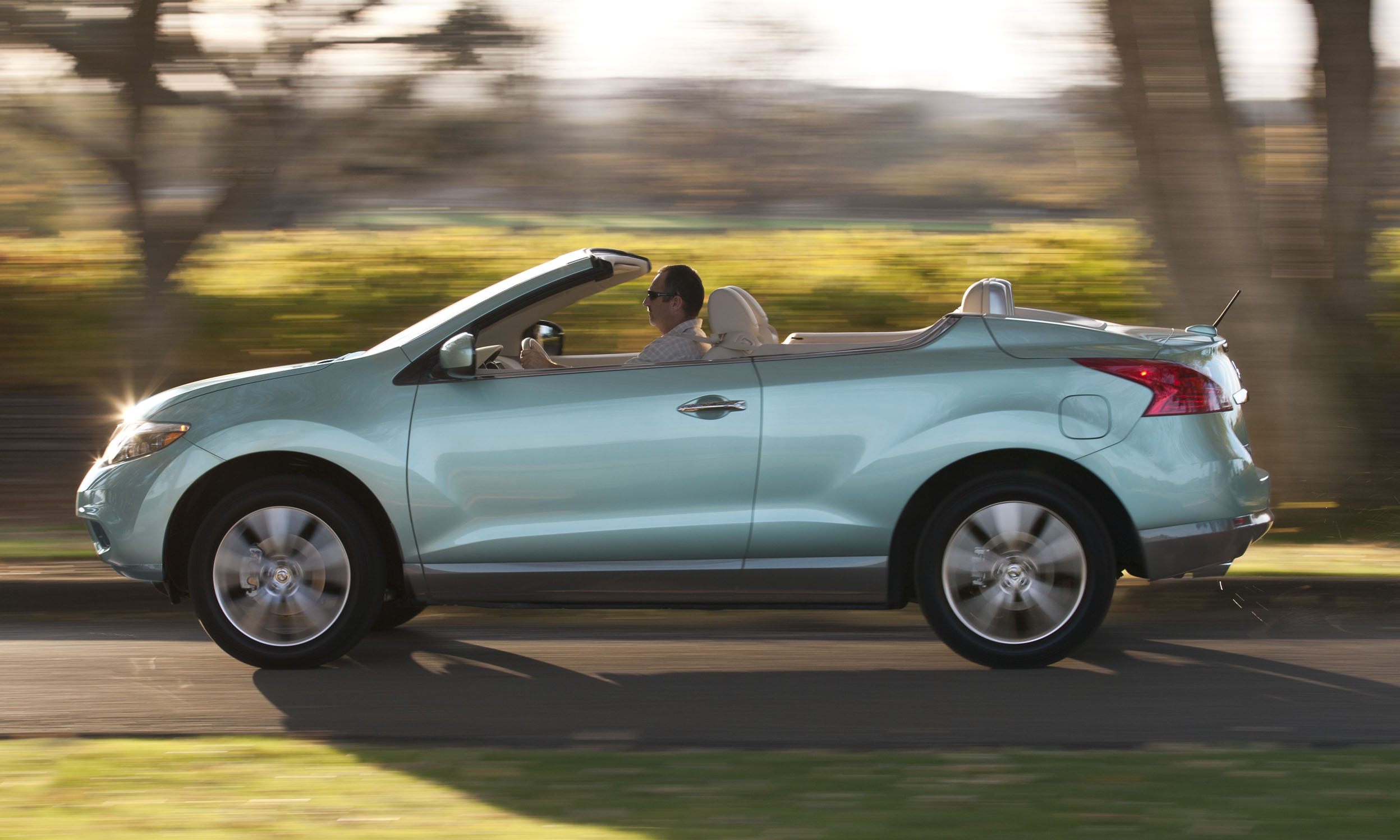 Nissan Murano CrossCabriolet
There are relatively few true turkeys in recent automotive history, and we’re trying to be sensitive here — obviously, over the past few years, some actual humans have bought some Murano CrossCabriolets. Perhaps you’ve seen one out “in the wild” (more likely you haven’t). Maybe we simply haven’t found the right context in which to place the Murano CrossCabriolet, revealing its actual cool factor. Maybe it’s just a weird, ugly, variant of an SUV that no one was clamoring for. 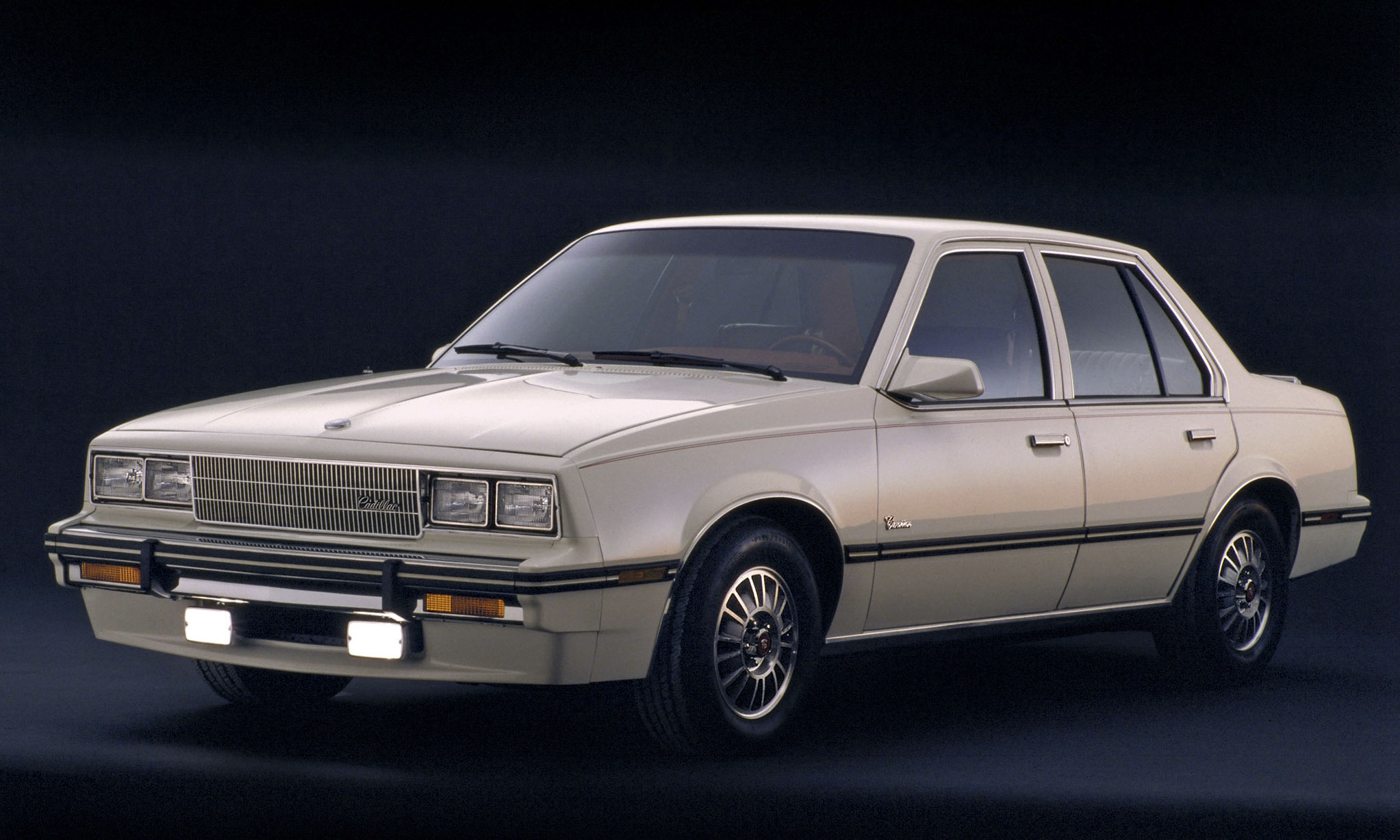 Cadillac Cimarron
The early ‘80s Chevrolet Cavalier wasn’t exactly a car out to set the world on fire, but it was a predictable, affordable General Motors product — and that’s all it really needed to be. The 1982 Cadillac Cimarron was a Chevrolet Cavalier with leather interior and the bare minimum of added accessories needed to excuse a re-badging that cost nearly twice that of a Cavalier. Guess how much people liked it? Go on — guess. 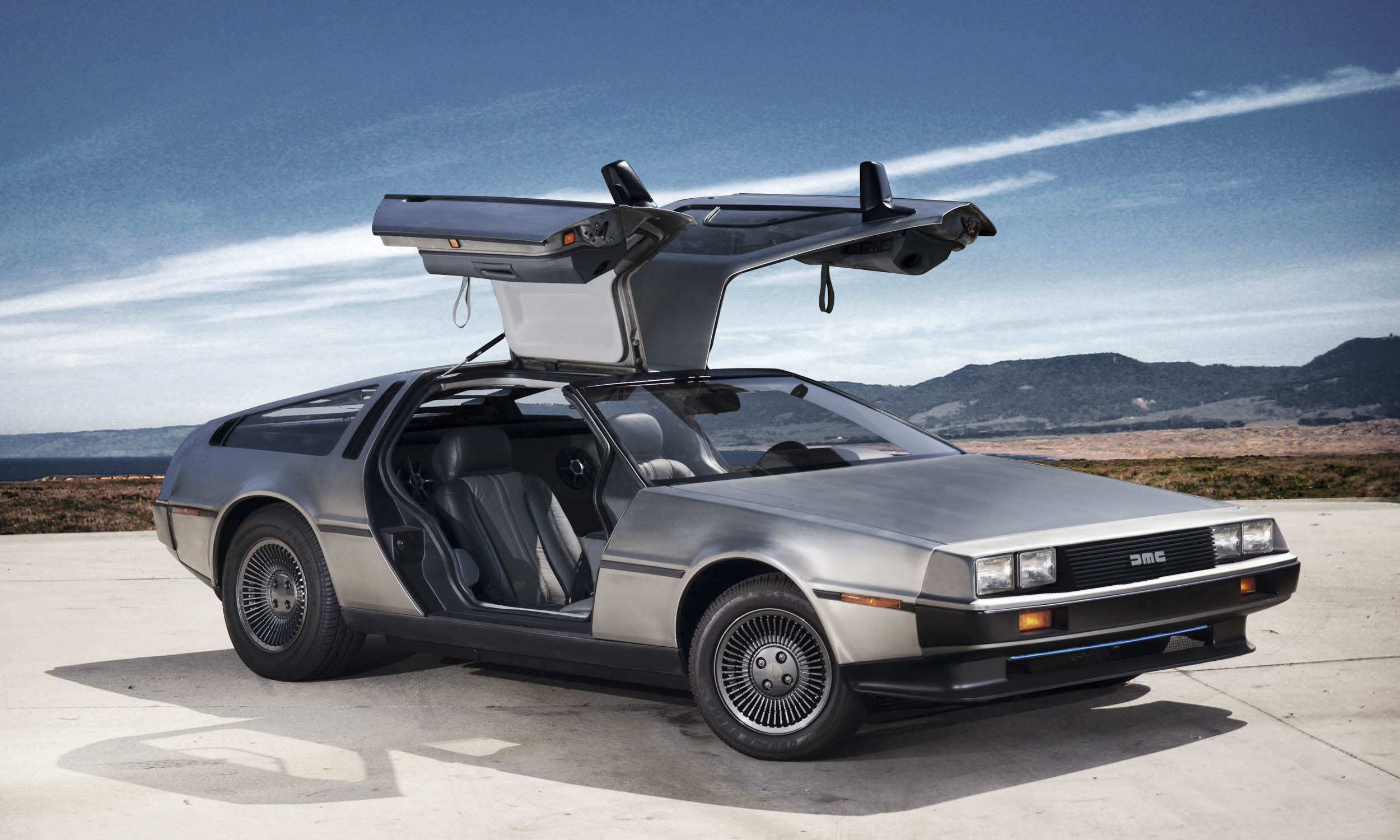 The DeLorean DMC-12
The DMC-12 will forever be a hero car — the “Back to the Future” movies have made sure of that. Even if they hadn’t, it just looks so cool; perhaps the apex of 1980s angular/wedge design chic. But here’s the rub: The DMC-12 was a shoddily built, underpowered and underwhelming. Only now are enthusiasts swapping engines and chassis to make the DeLorean live up to its looks, and that doesn’t come cheap. 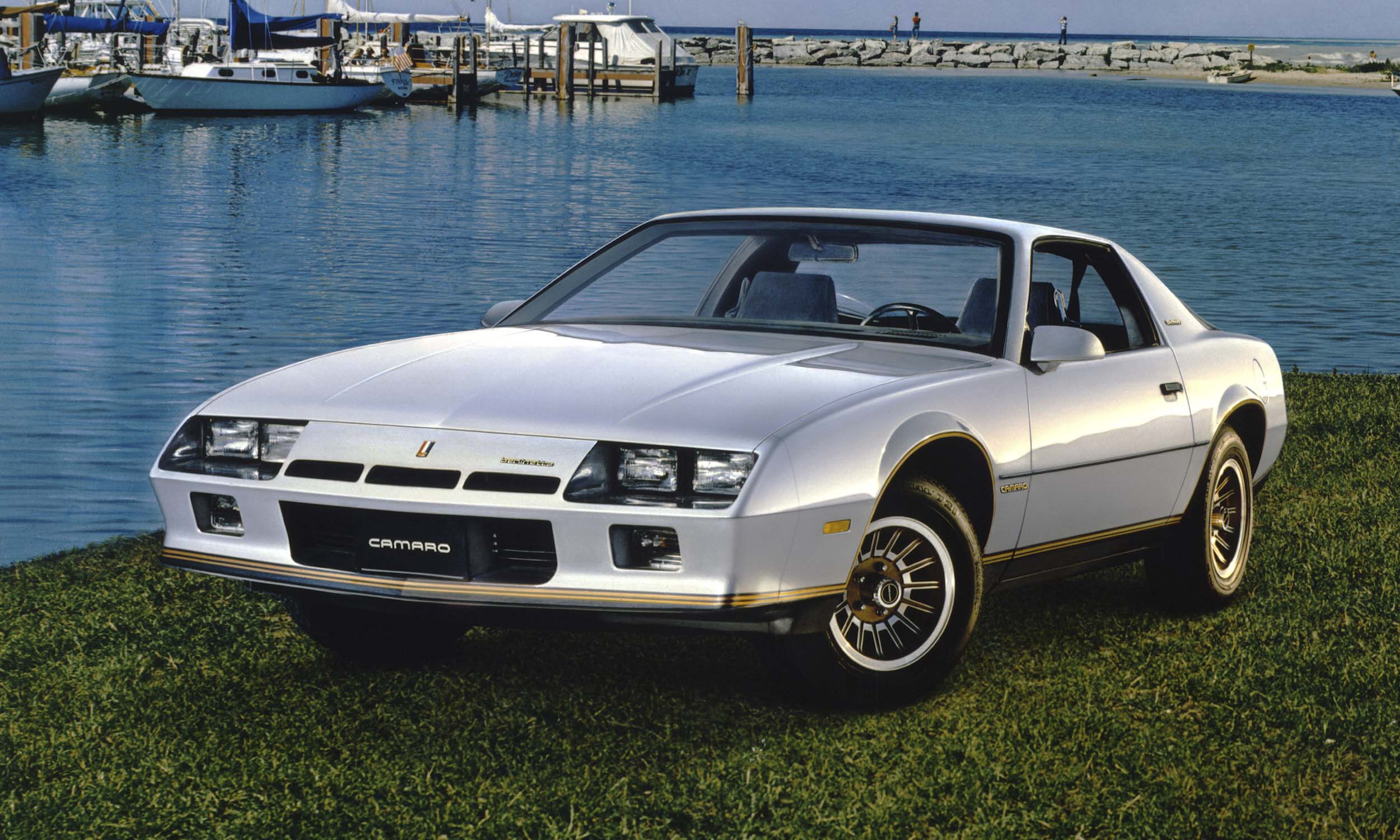 1982 Chevrolet Camaro
The dark days of the early 1980s reveal a low point in Camaro history. The third-generation Camaro has become an iconic design almost in spite of itself; it screams 1980s so loudly it eclipses irony, somehow remaining cool. However, the 1982 base model was “powered” by Chevy’s Iron Duke 4-cylinder engine, resulting in a 90-horsepower pony car. Better days and models were ahead, thankfully. 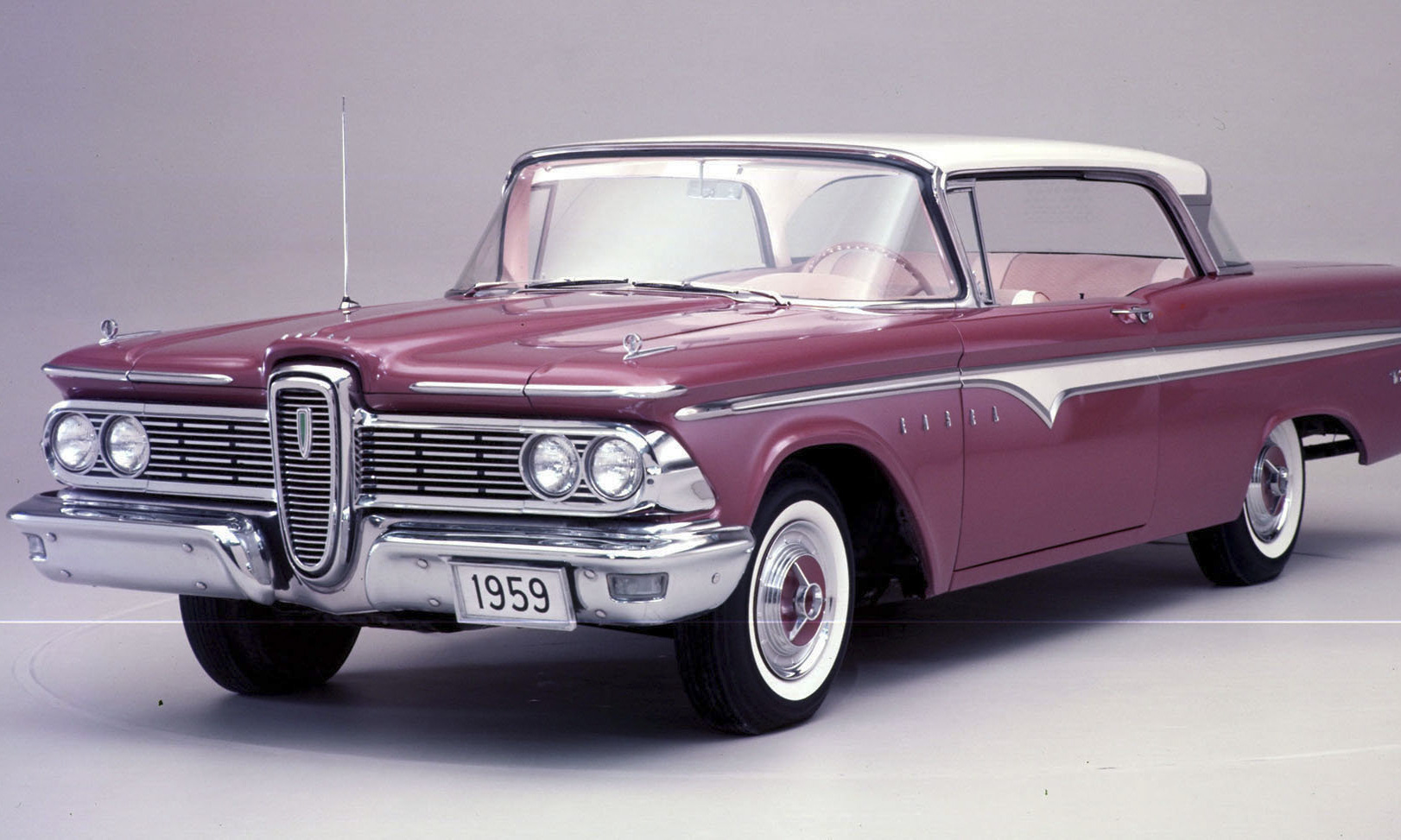 Ford Edsel
The turkey of turkeys; the name that is still, some sixty-odd years later, synonymous with an automotive dud: the Edsel. Ford hyped the Edsel line as offering all things to all people. Unfortunately, nearly everything that could go wrong with the Edsel — concept, design, marketing, mechanical quality — did, and what was supposed to be Ford’s midrange brand (slotted between Ford and Lincoln) selling hundreds of thousands of cars per year instead crashed and burned after three short model years. 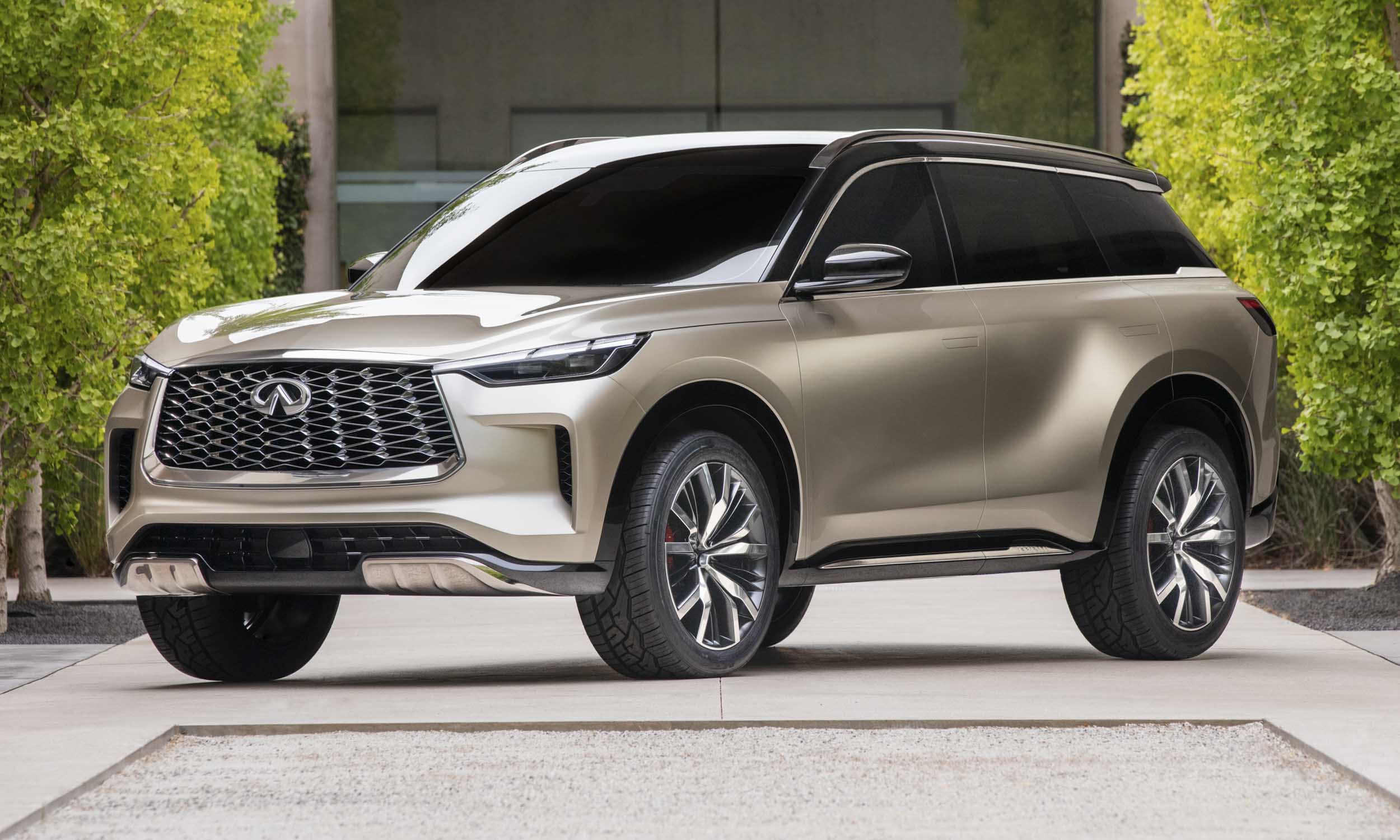 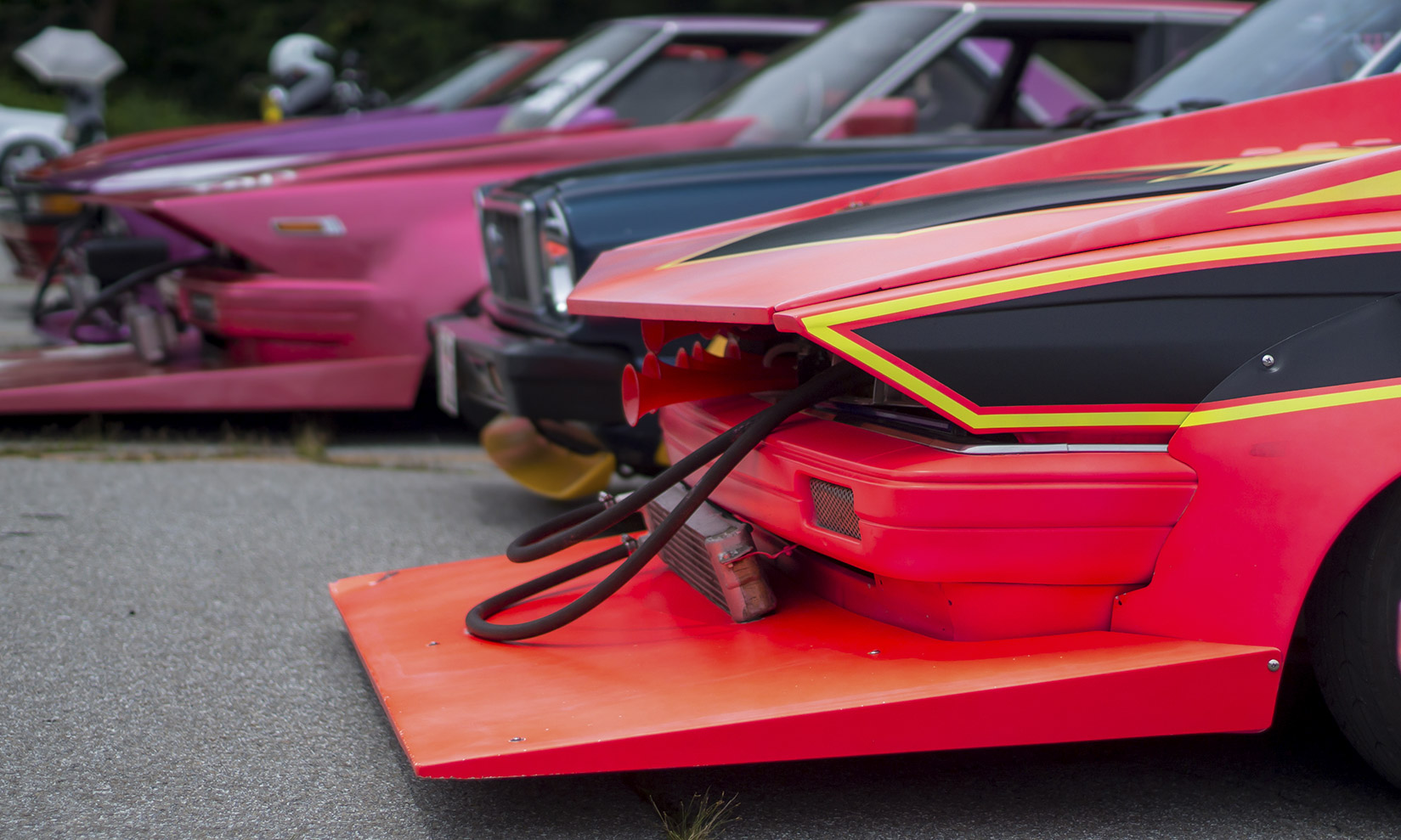