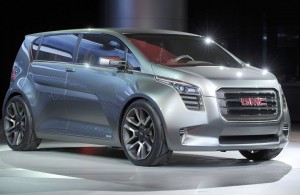 Initially unveiled at the 2010 North American Auto Show in Detroit, the Granite is a new twist on the normal direction of GMC vehicles and now GM has given the project the “go ahead.”

The subcompact crossover, which looks like it could be a highly modified Scion xB, will compete with vehicles like the Scion xB and Kia Soul in that trendy urban crossover category. If Granite is successful, it will bring a new kind of clientele in to GMC dealerships.

The concept had a 1.4-liter turbocharged engine with a six-speed manual transmission, but there are several other engines now in the GM arsenal. 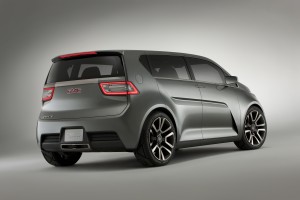 ranite will be the smallest GMC ever ? but has been optimized to feel much larger. Its length is a full 2 feet shorter than the Terrain compact crossover, but its open interior was designed to be spacious and flexible to fit the needs of active people. Generous cargo space and unique flipping/folding seats, for example, enable a mountain bike to be loaded completely inside with the tailgate closed.

Granite has four doors, hinged on each side to open like a set of French doors. There is no pillar between the front and rear doors, making the Granite easier to enter, exit and load, even with bulky items.

The interior was inspired by the design of aircraft-type mechanical instruments and precision tools. That is most apparent on the dashboard and instrument cluster, where gauges were modeled after finely crafted timepieces. A compass incorporated into the ?barrel? surrounding the speedometer moves with every turn of the vehicle, providing an at-a-glance directional confirmation.? Red backlighting illuminates the gauges, while a panel of organic light-emitting diode screens is the foundation for the vehicle?s navigation, infotainment, phone and climate control readouts. The screens represent the next generation in vehicle information displays, with bright, multidimensional readouts and intuitive controls that give the Granite a modern feel. 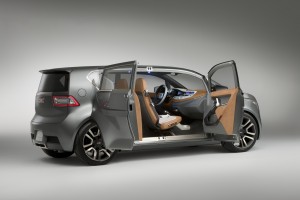 Integrated within Granite are unmistakable GMC cues, including a center stack wing motif similar to that of the GMC Terrain. A prominent center console runs between the front and rear seats, with ports to plug in popular portable electronic devices, as well as storage compartments large enough for a laptop computer.

The center console also houses a unique transmission shifter. Rather than a handle that actuates within a conventional gate, it is a simple, space-saving knob that rotates with the precise clicks of a torque wrench. The gear selections are confirmed via LED indicators.

Among the most functional elements of the Granite concept are reconfigurable seats. The front passenger and right rear seats flip up and fold in toward the center console, creating a long, unobstructed storage space. The Granite functionally addresses the needs of young professionals and their activities without compromises. 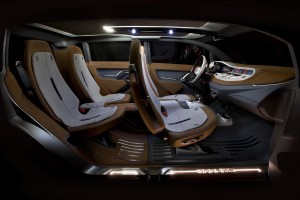 The cargo area includes a number of compartments to store items out of sight. Cargo hold-down provisions are built into the cargo area and the seatbacks have clasps that can be used when the seats are upright or folded to help secure cargo.