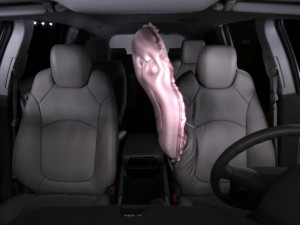 General Motor is adding a new center airbag designed to help protect the driver and front seat passenger in far-side impact crashes. ?Engineered to deploy between the front seats of the vehicle, the front center air bag is mounted in the right side of the driver?s seat and positions itself between the front row seats near the center of the vehicle. ?The tethered, tubular air bag is designed to provide restraint during passenger-side crashes when the driver is the only front occupant, and also acts as an energy-absorbing cushion between driver and front passenger in both driver- and passenger-side crashes. ?The air bag also is expected to provide extra protection in a rollover situation, too.?

GM analysis of the National Highway Traffic Safety Administration?s Fatality Analysis Reporting System database, found that far-side impact crashes, which the front center airbag primarily addresses, accounted for 11 percent of the belted front occupant fatalities in non-rollover impacts between 2004 and 2009 involving 1999 model year or newer vehicles. ?These far-side fatalities, where the occupant is on the non-struck side of the vehicle, also represent 29 percent of all the belted front occupant fatalities in side impacts.

?The front center air bag is not required by federal regulation, and no other air bag in passenger vehicles today offers the type of restraint and cushioning this air bag is designed to provide for front occupants,? said Scott Thomas, senior staff engineer in GM?s advanced restraint systems.

The front center air bag is expected improve the vehicles? record of third-party crash test performance. The 2012 model year editions of these midsize crossovers have received five-star Overall and Side Crash safety ratings from NHTSA?s New Car Assessment Program, and 2011 Top Safety Picks from the Insurance Institute for Highway Safety.

GM and technology supplier?Takata?developed the front center air bag over the course of three years, testing many design iterations to achieve packaging, cushioning, and restraint for a variety of crashes and occupant positions. ?Numerous elements of the air bag?s jointly patented cushion design address the restraint?s unique performance characteristics while considering a range of occupant sizes.

?While no restraint technology can address all body regions or all potential injuries, the front center air bag is designed to work with the other air bags and safety belts in the vehicles to collectively deliver an even more comprehensive occupant restraint system,? said Gay Kent, GM executive director of Vehicle Safety and Crashworthiness. ?This technology is a further demonstration of GM?s above-and-beyond commitment to provide continuous occupant protection before, during and after a crash.?