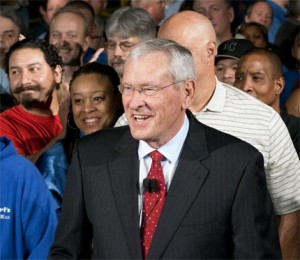 As citizen-stockholders in the company, all Americans will be happy hear that General Motors today announced that the company has made its final payment of $5.8 billion to the U.S. Treasury and Export Development Canada, paying back its government loans in full, ahead of schedule. That’s a precursor to allowing the government to sell its interest in GM and get the company off the public’s hands. Whether you’re a liberal or conservative, this is good news from a major American company and all its employees.

?GM is able to repay the taxpayers in full, with interest, ahead of schedule, because more customers are buying vehicles like the Chevrolet Malibu and Buick LaCrosse we build here in Fairfax,? said Chairman and CEO Ed Whitacre. ?We are now building some of the best cars, trucks, and crossovers we have ever built, and customers are taking note. Our dealers are increasing their sales, we are investing in our plants, and we are restoring and creating jobs.?

The U.S., Canadian, and Ontario governments, as part of the launch of the new GM, provided loans of $8.4 billion and took equity stakes in the new company. Today?s payment of $5.8 billion ($4.7 billion to the U.S. Treasury and $C1.1 billion to Export Development Canada) completes the payback of these loans.

?GM?s ability to pay back the loans ahead of schedule is a sign that our plan is working, and that we are on the right track. It is also an important first step toward allowing our stockholders to reduce their equity investments in GM,? said Whitacre. ?We still have much hard work ahead of us, but we are making progress toward our vision of designing, building, and selling the world?s best vehicles.

?We appreciate the support the taxpayers have given GM, and our great new products are tangible results of that support,” Whitacre said.

Since the launch of the new GM last July, the company has announced investments of more than $1.5 billion at 20 facilities in the U.S. and Canada. These investments restored or created more than 7,500 jobs, and they demonstrate a strong commitment to GM?s future and to the United States and Canada.