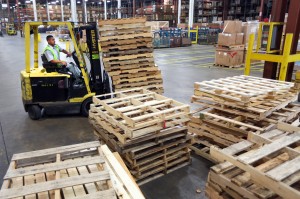 With the recent addition of a parts distribution center in Lancing, Mich., to the list of landfill-free facilities, General Motors now has 100 such trashless locations.

To make the program work in each location, GM first reduces waste and then focuses on recycling and reuse. In 2011, it recycled or reused 2.6 million metric tons at its facilities worldwide. That is equivalent to more than 38 million trash bags.

?Our landfill-free program continues to strengthen our business by creating efficiencies, generating revenue and inspiring innovation with products made from recycled content,? said Mike Robinson, GM vice president of Sustainability and Global regulatory affairs.? ?It?s a mission that?s integrated within our business processes. Everyone here plays a role in its success.? 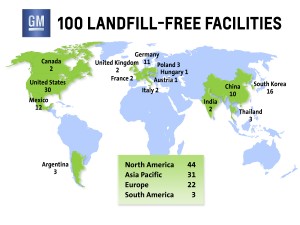 M began tracking its waste 15 years ago and has strived to improve the program each year and are currently recycling or reusing more than 90 percent of the waste they generate.

?One of GM?s secrets to success is its cultivation of a strong network of suppliers committed to recycling materials and keeping them in use,? said Steve Hellem, executive director of Suppliers Partnership for the Environment, a forum for automakers, suppliers and the U.S. Environmental Protection Agency. ?Their team regularly facilitates conversations, connects companies and even showcases creative recycling examples for others.? 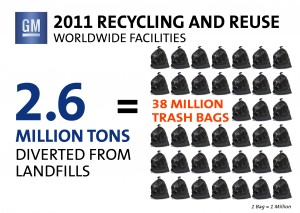 In conjunction with its suppliers, GM recycles scrap cardboard from various plants into a sound absorber on the Buick Lacrosse and Verano interior roof. Air deflectors on the Chevrolet Silverado and GMC Sierra pickup trucks are made with used tires from the automaker?s proving ground.