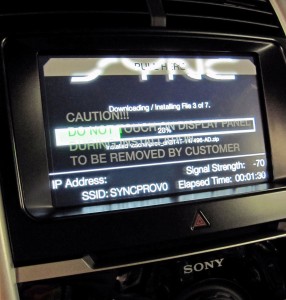 As the new Ford Edge moves down the Oakville, Ontario assembly plant, robots and workers add appropriate components and parts, but now there is a new third force contributing to the assembly process — wireless.

Ford is the first automaker to use Wi-Fi provisioning on the assembly line to wirelessly deliver SYNC software to vehicles equipped with the new MyFord Touch driver connect technology as they are being built.

?Using wireless software installation via Wi-Fi, we can stock just one type of SYNC module powering MyFord Touch and loaded with a basic software package,? explained Sukhwinder Wadhwa, SYNC global platform manager. ?We eliminate around 90 unique part numbers, each of which would have to be updated every time a change is made ? this system really boosts quality control.? 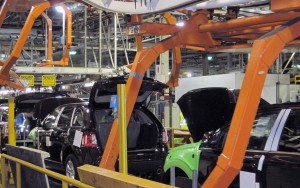 Earlier in the year, Ford announced that the next-generation SYNC system that powers MyFord Touch would feature a built-in Wi-Fi receiver. Now, Ford is further capitalizing on the limitless possibilities of this in-car wireless connection, making communication between the vehicle and the assembly line a reality.

The Oakville, Ontario, assembly line that produces the all-new 2011 Ford Edge and Lincoln MKX will be the first to feature wireless access points for software installation. In turn, the Edge and MKX will become the first vehicles to get their infotainment software installed via Wi-Fi while moving down the line.

Through July, hundreds of pilot vehicles were successfully moving through the Wi-Fi access point at Oakville. ?Employees at the Oakville assembly plant helped us tremendously in getting the Wi-Fi process to work, and work perfectly,? said Wadhwa. ?Turning an assembly plant ? with steel beams everywhere and high-voltage cabling throughout; everything you could imagine that would interfere with a radio signal ? into an access point that would achieve 100 percent success was a huge challenge.

?Oakville is our model for what we?re doing next in Chicago, then into Europe for the new Ford Focus.?

Through the Wi-Fi connection, SYNC software options totaling as much as 300 megabytes of data can be installed and configured wirelessly, including:

The addition of the SYNC app Traffic, Directions & Information in U.S. markets