Ford?s first dedicated line of hybrids will be rolling in to dealerships this fall promising to deliver best in class fuel economy and innovative new technologies. ?The efficient new C-MAX Hybrid Utility Vehicles will be available in two versions, the Hybrid and the Energi plug-in hybrid.

The C-MAX is just slightly shorter than the Prius but offers more than two cubic feet of interior space for passengers and luggage than the Prius.

The C-MAX Hybrid will be first out in the second half of 2012, followed later in the year by the C-MAX Energi, the plug-in version.? The Energi is expected to deliver a better fuel economy equivalent in the electric mode than the Toyota Prius plug-in hybrid, plus it has an overall driving range of 500-miles.

The C-MAX is a compact hybrid utility vehicle and is first of Ford?s dedicated line of hybrids. The 2013 C-MAX Hybrid will be available this fall with a base price of $25,995 ? approximately $500 lower than the Toyota Prius v?s base price.?The price of the Energi plug-in has not been announced.

Both vehicles feature the next generation of Ford?s acclaimed powersplit technology that will allow operation in electric mode at higher speeds than any other hybrid.

?C-MAX is the right car for the time as it combines the dynamics and quality of a traditional car with the versatility of a MAV and leading fuel efficiency that you cannot even get from Toyota,? said Sherif Marakby, director of Ford?s Electrification Programs and Engineering.

The Ford hybrids will have class-exclusive features like hands-free liftgate (offering hands-free cargo access with a simple kicking motion), SmartGauge??with EcoGuide, regenerative braking and an advanced lithium-ion (li-ion) battery pack that is being used for the first time in a Ford hybrid.

In the C-MAX Hybrid, the li-ion battery pack is recharged when the gasoline engine is in operation. Further, the regenerative braking system can recapture more than 95 percent of the braking energy that would otherwise be lost, and is able to use that power to help charge the battery. C-MAX Hybrid requires no plug-in charging.

The C-MAX vehicles will be built on the company?s global C-segment platform and are two of five electrified vehicles Ford plans to launch in North America in 2012.? 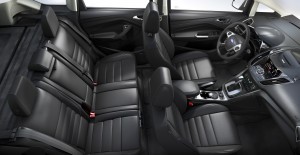