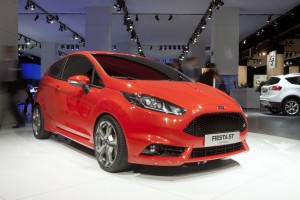 Ford used the annual Frankfurt Motor Show for a surprise unveiling of a new Fiesta ST concept.? Shown alongside the all-new production version of the Focus ST, the Fiesta shows Fords commitment to the worldwide production of new Sport Technologies cars, with more performance models promised. 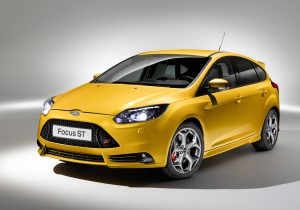 The production-ready Focus ST was revealed at the 2011 Frankfurt Motor Show as Ford?s first performance vehicle to be sold into more than 40 markets around the world, including the USA, Canada, Mexico, South Africa, Australia, New Zealand and 15 European countries.

?Our strategy is powered by the One Ford global product plan and extends the reach of exciting Ford performance vehicles to a broader range of customers around the world than ever before,? Kuzak said. ?It is also instrumental in shaping Ford?s strategic approach to and support for international motorsport activity involving our global small cars, the Focus and the Fiesta.? 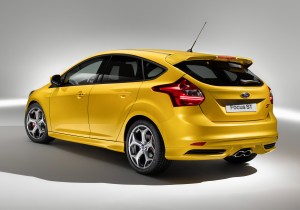 Every Ford to carry the ST badge will be a performance car that emphasizes fun-to-drive qualities. Yet every aspect of performance in a Ford ST is highly refined and balanced to bridge the gap between an everyday driver and a car used for running down a twisty road.

Ford ST models will also share key physical similarities in areas such as colors and exterior styling, as well as interior styling and driver-orientated interior features.

The ST DNA defines performance levels, not only in the handling characteristics but in the engine outputs too. For ST models, this DNA profile means a noticeable power increase over the existing model?s engine along with improvements braking and lateral acceleration.

Vehicle attributes like the feel of the steering, the sound of the engine and comfort of the suspension are also dictated by the DNA, meaning customers will recognize an ST the moment they sit in one, no matter where in the world they are. This will give all future ST models a shared genetic origin, which will influence customer expectations. 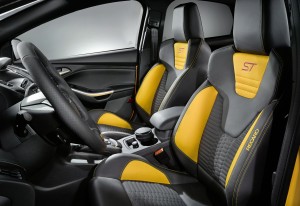 For North America, the new Focus ST five-door will be the market?s first compact performance Ford since the first-generation SVT Focus.

?You will be able to buy the same Focus ST in New York, Sydney or London,? said Matthias Tonn, chief program engineer, Focus ST. ?We are delivering this car to markets around the world where fast cars are desired. ?And no matter where you get into the driver?s seat, you will have the same performance, same style and same fantastic ST experience.?

Built at the Ford?s Michigan Assembly Plant for the North American markets and Germany?s Saarlouis Assembly Plant for Europe, Australia, New Zealand and South Africa and other world markets, the new Focus ST sets the strategy in place for the design, development, manufacture and distribution of future performance Ford models.

Muscular and sporty, the Fiesta ST Concept is inspired by the Ford Fiesta WRC. It features a dynamic sports chassis and a high performance powertrain featuring a 1.6-litre Ford EcoBoost engine, yet is capable of delivering impressive fuel economy.

Target performance levels for the Fiesta ST Concept are 178 hp of power output and 177-ft.lb. of torque, enough to propel it from 0-62 mph in less than 7 seconds. ?A top speed exceeding 137 mph is targeted. 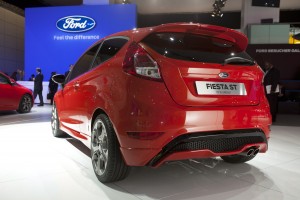 The advanced design of the turbocharged, 4-cylinder Ford EcoBoost engine ? connected to a 6-speed manual transmission ? means the Fiesta ST Concept is forecast to deliver a low CO2 emissions level of less than 140g/km.

As with all engines in the EcoBoost family, the Fiesta ST Concept?s advanced engine combines turbocharging and direct injection to deliver the powerful performance of a larger capacity traditional gas engine.