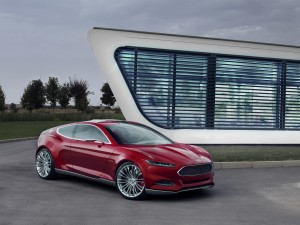 Using the 2011 Frankfurt Motor Show as a backdrop, Ford is unleashing a new brand DNA on the automotive world.

??We wanted the Ford Evos Concept to give a clear message about where Ford design is heading ? shaping vehicles that are fun to drive, have a strong premium visual appeal, and above all, are stunningly beautiful,? said J Mays, group vice president, Design and chief creative officer. 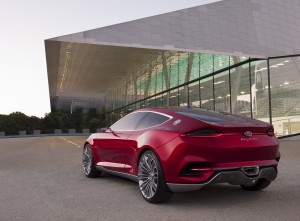 ??Our exciting new design DNA has been developed and refined by an intensive effort by all of our talented global design team,” said Mays.?”As a team, we wanted to create a more technical design vocabulary to help communicate the smart technology that is now core to the Ford brand.?In addition, we worked particularly hard on meeting the high-expectations of a new generation of buyers ? a group of consumers who have grown up surrounded by beautiful, premium design work on even the most affordable products.”

The Ford Evos Concept will be the first to carry the new genetic display with a dramatic fastback concept with striking profile and innovative proportions. ?At first glance Evos looks like a classic GT car, but the dramatic lines hide a more practical four-door, four-seat layout.? Evos is as long as a Ford Focus and nearly as wide as an Explorer giving it a powerful, sporting stance. ??A set of four gullwing-style doors provide wide-open access to the interior before closing back to the striking exterior shape. 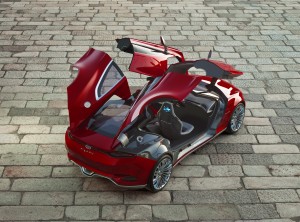 ?Evos represents the key elements of Fords to come, debuting the shape of the company?s ?distinctive new global design language.

?The new design DNA marks a bold evolution of the kinetic design language featured on existing global Ford products and is characterized by a number of important elements that will contribute to an unmistakable future Ford look,? said Mays.

From the front, the Ford Evos Concept immediately signals the arrival of something new ? a new face for Ford featuring the signature trapezoidal grille mounted higher on the car and creating a confident, more premium look.

Bold, technical shapes, such as the extremely slim ?laser cut? front lamps or the dramatic graphic created by the front and rear screens connected by the thin glazed section of the roof, add a distinctive character to the design.?Sculptured flanks highlight attention to detail on the surfacing, which lends a refined quality and a tauter, more muscular character. 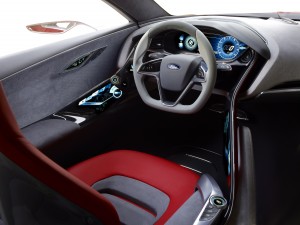 Ford Evos Concept is not just a design-led exercise. It also embodies the global Ford product development team’s move to design and develop vehicles as more than just an interior and exterior, or a collection of attributes.

?Completing the vision for the Ford Evos Concept is a state-of-the-art lithium-ion plug-in hybrid powertrain providing the same next-generation performance and fuel economy as the Ford C-MAX Energi scheduled for introduction in North America in 2012 and Europe in 2013.

Ford ?powersplit? hybrid architecture allows the electric motor and gasoline engine to work together or separately to maximize efficiency. The advanced powertrain typically runs in all-electric mode before switching to a charge-sustaining hybrid mode for continued optimal fuel efficiency.

To learn more about the Ford Evos go to http://evosconcept.fordmedia.eu/ 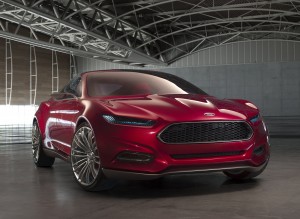