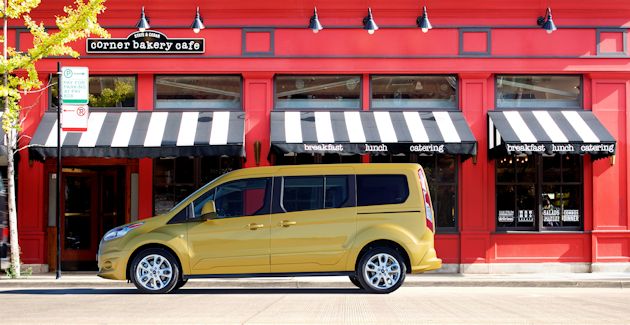 Los Angeles ? Over the last few years the Ford Transit Connect compact van has expanded its successful base from Europe and found a home on American streets delivering flowers, auto parts and serving as an efficient mobile base for a multitude of small businesses. In fact, there are more than 150,000 Transit Connects on U.S. roads already.

Now, a dozen years after the first Transit Connect debuted in Europe, Ford has redesigned, updated and enhanced the original. This second generation also brings to the table the people moving capabilities of the Ford Transit Connect Wagon, or as Ford calls it, the ?Unminivan.?
I equate this new Wagon version to the venerable old VW Microbus which in the 1960s was a favorite for hauling families, friends and large quantities of anything that needed to be moved. It also saw duty as a recreational vehicle before we even knew about RVs. Video

?Ford?s all-new Transit Connect Wagon is unlike anything else,? said Minyang Jiang, Transit Connect brand manager, Ford Motor Company. ?It drives like a car, has the flexibility of a utility and can haul the payload of a full-size pickup. This new wagon is a great combination of affordability and functionality ? a unique global vehicle we?re proud to offer our customers.?

Actually Ford has been making a passenger version of the Transit Connect since the beginning, but the 2014 is much more passenger friendly and is available in more variations than the original. 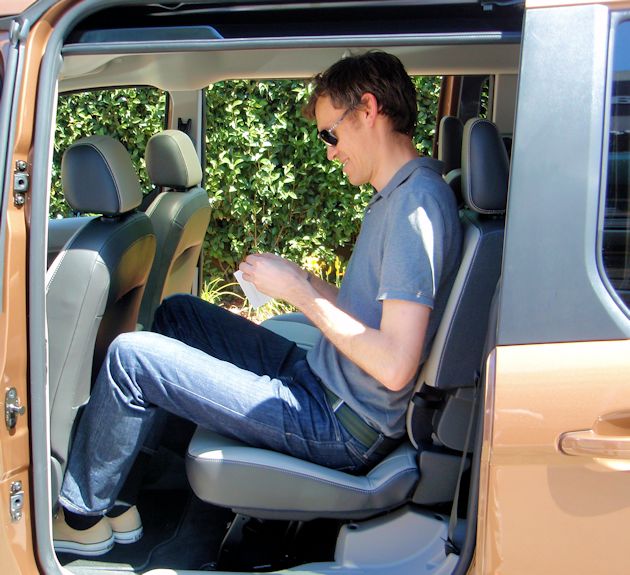 The 2014 Ford Transit Connect and Transit Connect Wagon are available in two lengths. The short wheel base version is 173.9 inches long, which makes it the same length as the Ford Focus and about six-inches shorter than the Honda Civic sedan or Mazda5 wagon. The long wheel base version is about 16-inches longer and about 350 pounds heavier. For the Wagon, that translates to a third row of seating for seven passengers instead of five.
Interior room was unexpectedly generous with very comfortable conditions in the first two rows. The third row was tighter, but better than many of the third row in vehicles I?ve tried. I was especially impressed when a 6 foot 8-inch journalist friend sat in the second row seat and had plenty of leg and head room. When more cargo space is needed in the Wagon, the two rear rows fold flat creating 104 cubic feet of space. To put that in prospective, that?s only about six cubic feet less than the maximum cargo space in the Ford Expedition EL. 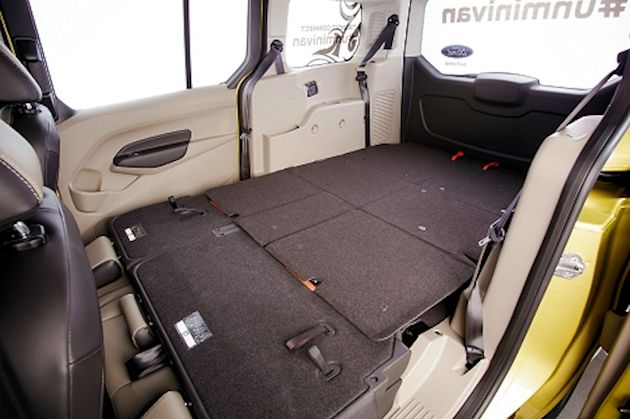 All versions have sliding doors or both sides for easier access and the rear cargo space is accessed by either two side-opening doors or an overhead liftgate. I vote for the liftgate because it creates an umbrella when loading and it gives the driver a better rear view. 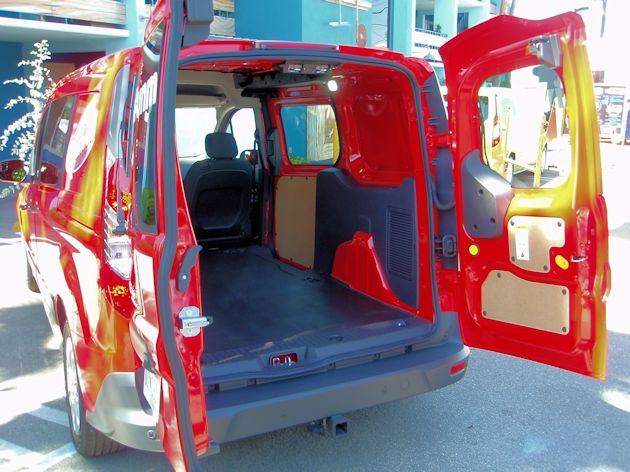 The commercial version is available with various rear window/panel configurations to provide the owner the ability to customize the space to suit the job. The rear of the Wagon is windows all around for the best visibility.

Two engine choices are offered. The base engine is a 169-hp 2.5-liter four-cylinder which has an EPA fuel economy rating of 20 mpg city and 28 mpg highway. The optional 178-hp 1.6-liter EcoBoost? (turbocharged) four-cylinder is rated at 22/29 mpg. All versions are front-wheel drive and have Ford?s six-speed SelectShift? automatic transmission. The maximum towing capacity is rated at 2,000 pounds, which works for pulling motorized toys or even a small camper. 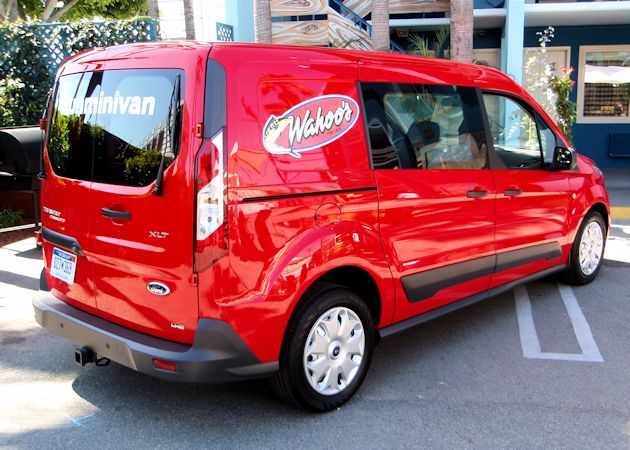 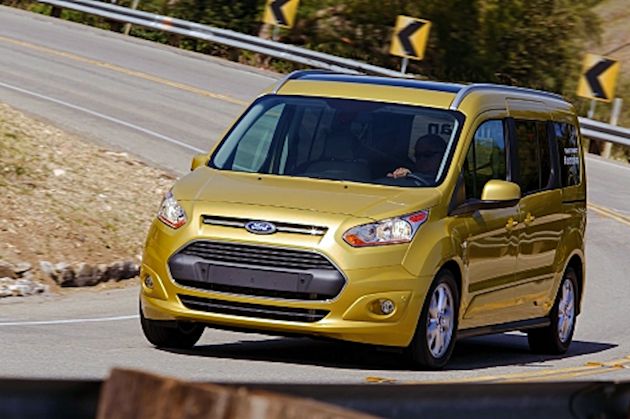 A Los Angeles area drive wouldn?t be complete without a stop-and-go down Sunset Boulevard, then a romp up the Pacific Coast Highway through Malibu and finally up into the Santa Monica Mountains on those famous windy roads. The Transit Connect Wagon I drove performed beautifully. Earlier I said the Wagon is the same size as the Ford Focus; that?s because it?s built on the same platform as the sporty Focus. That also means the Wagon has many of the same handling traits. Adding to the suspension stability is a new torque vectoring control technology which uses the brakes to provide extra stability and control while cornering.

Overall, the Wagon is agile and handles more like a sport wagon than a van. I actually found it quite fun-to-drive. Obviously, the small Ford van is not going to accelerate like a typical sport wagon, but it can really haul ? cargo and people. 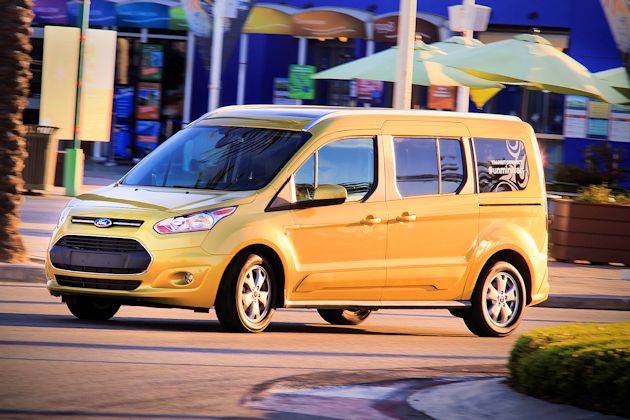 Ford doesn?t quote acceleration times, but I did find testers who claimed a 9.5 second 0 to 60 mph time for the 2.5-liter engine and 8.7 seconds for the EcoBoost engine. Those numbers feel about right, based on my drive.

Driving through the mountains at posted speeds the Wagon stayed relatively flat, well-balanced and the steering was comfortable and precise. The short wheel base model even has a tight 36.1-foot turning radius that makes especially maneuverable in tight quarters. (The LWB model takes about four feet more). The four-wheel disc ABS brakes do a good job of stopping with a light load and should handle heavier loads proportionately. 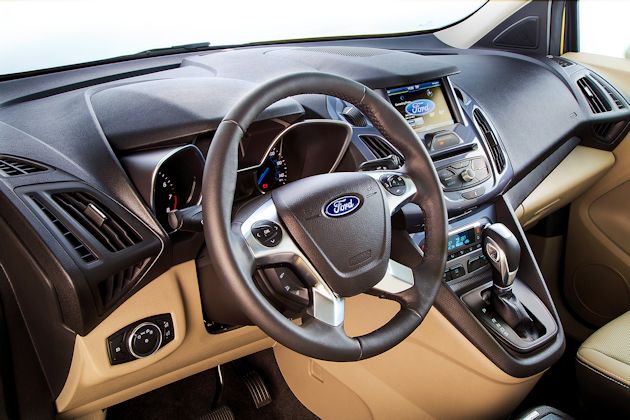 The rear visibility was better than I expected considering all the pillars in the back. For easier parking and backing up the Transit Connect models have an available rear view camera and forward and rear-sensing systems that work at low speeds to warn the driver when he/she nears an obstacle.
I?ve was impressed by the versatility and compact size of the Ford Transit Connect. It?s perfect for so many small business owners that don?t need all the capacity of a full size van. And the new Wagon will give families and people that want the extra capacity and versatility without going the route of a traditional minivan or full size van. 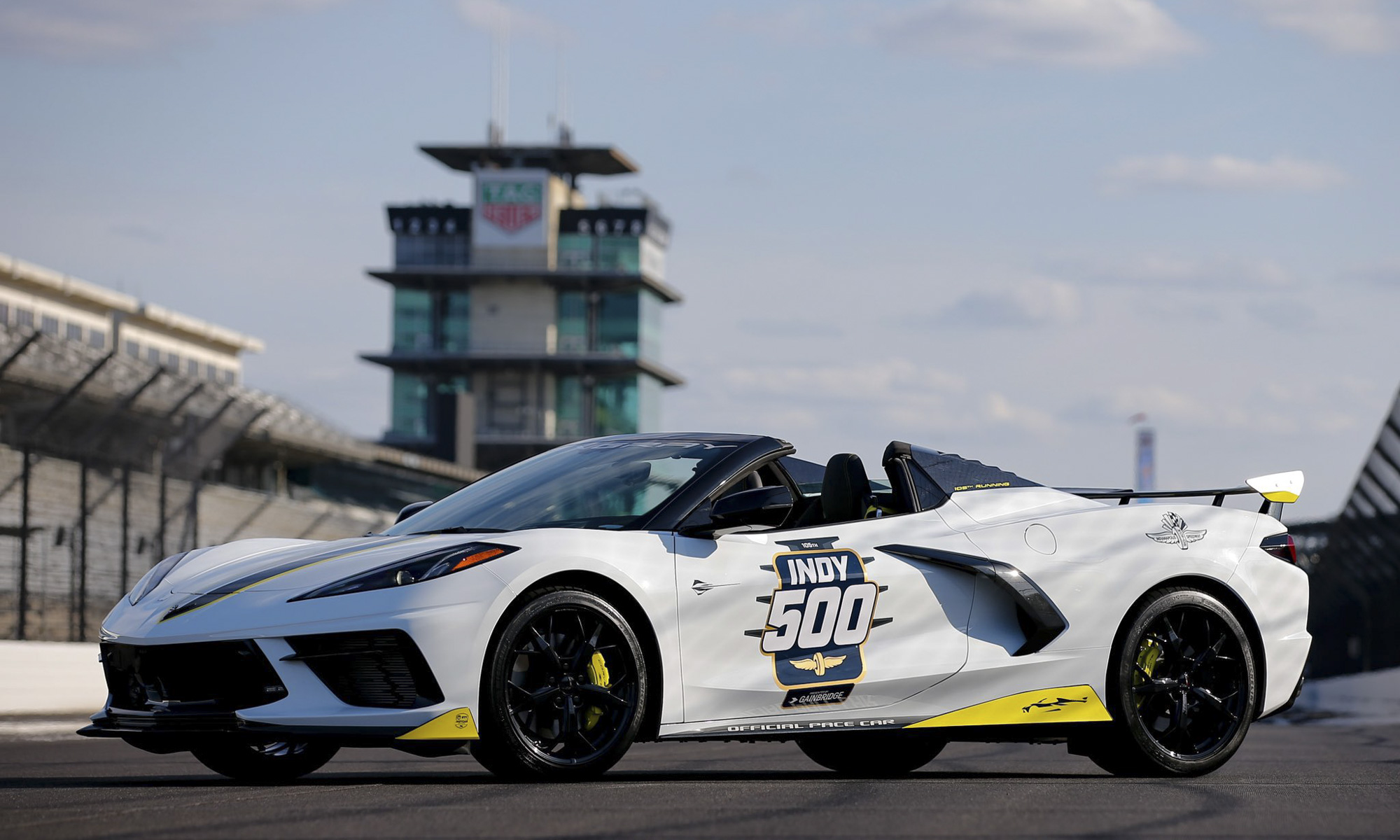 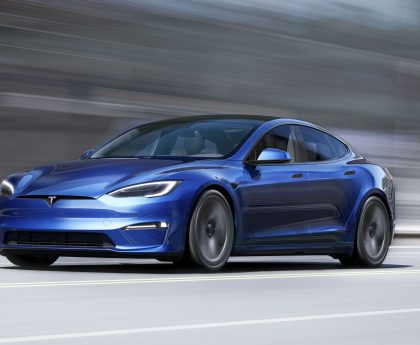