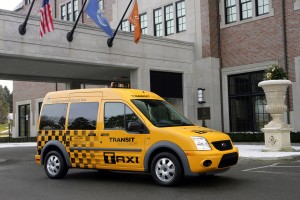 Chicago ? The Chicago Auto Show is always one of the best of the year with its excellent organization, amazing facilities and friendly people.? The 2011 event had all of that but was a bit short on real news.? A highlight of the participation for us, however, was the shuttles from the hotel to the McCormick Place, where the show is held.

In addition to the normal buses that run back and forth, Ford provided three Transit Connect Taxi models ? the real thing — to ferry auto journalists.? The Cabs seem small on the outside, but have plenty of space and the ingress and egress is much easier than with a normal cab. ?Plus, the Ford Taxis is comfortable and quiet, too. 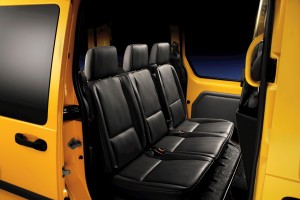 Ford Transit Connect Taxis will begin winding through the streets of the Windy City in March when a fleet of the alternative-fuel vehicles joins Yellow Cab Chicago.

Taxi Medallion Management purchased the 12 clean-burning compressed natural gas (CNG) Transit Connect Taxis for its fleet. The cabs will be affiliated with Yellow Cab Chicago and bear the company?s logo and color.

The purchase is part of the company?s goal of reducing emissions by 25 percent, said Michael Levine, CEO of Taxi Medallion Management. According to the U.S. Environmental Protection Agency, CNG is less expensive and burns cleaner than gasoline, resulting in 30 to 40 percent less greenhouse gas emissions. 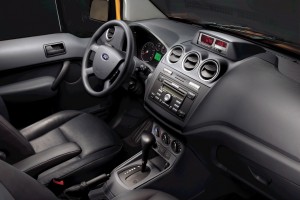 ?We are adding vehicles with more fuel-efficient gasoline engines, as well as vehicles with alternative-fuel sources, to find a vehicle mix that best suits our customers, our drivers, the city at large and the environment,? said Levine. ?We are excited about testing this new vehicle.?

The Ford dealership, Packey Webb Ford, of Downers Grove, Ill., will deliver the taxi units to Taxi Medallion Management with an engine preparation package for conversion to CNG.

Since introduced as a production vehicle last year, Transit Connect Taxi is gaining interest from taxi operators around the country. The first taxi was delivered to Boston Cab Dispatch in December 2010.

?During product development of this vehicle, we visited cities across the U.S. speaking with taxi owners, operators, drivers and city officials on the key product attributes they wanted in a taxi,? said Gerald Koss, Ford Fleet marketing manager. ?Of course reliability and durability were key, but fuel-efficient powertrains and sustainable solutions also were high on their lists.? 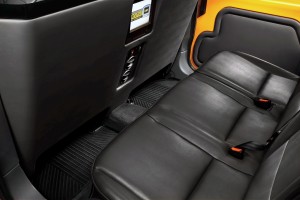 The Transit Connect Taxi package adds comfort for the passenger with a repositioned second-row seat for more legroom, grab handles and a rear ventilation system with passenger controls. For the driver, in addition to the comfortable driving environment, new features include rear view camera and back-up sensor, heavy-duty battery and wiring block connector to power upfitted accessories. The taxis have a 39-foot turning radius that provides excellent driving dynamics and takes the hassle out of tight spots.

The standard Ford Transit Connect ? 2010 North American Truck of the Year ? features a 2.0-liter I-4 engine that gets EPA-estimated 21 mpg city and 26 mpg highway, an estimated 30 percent improvement in fuel economy compared with traditional taxis.

In addition to CNG, Transit Connect Taxi is available with an engine preparation package for conversion to liquefied propane gas (LPG). Both CNG and LPG lower taxi fleets? operating costs and are better for the environment. 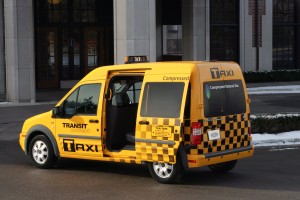 During its first full year of production, 27,405 Transit Connect vehicles were sold in the United States. Demand for Transit Connect continues to grow as evidenced by the 41 percent year-over-year increase in sales for December 2010.