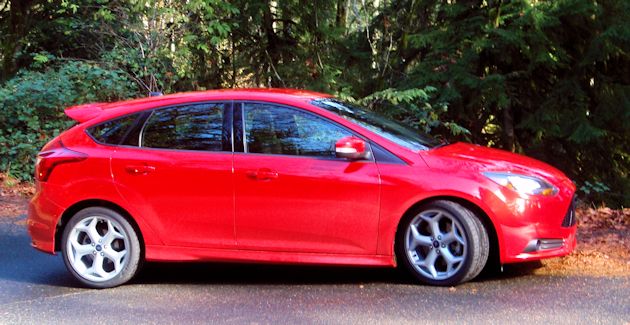 We?ve driven the latest generation 2014 Ford Focus and the Focus Electric and liked them both, but to us, they simply don?t compare to the latest Focus offering, the Ford Focus ST. It?s amazing how some performance upgrades and turbocharged engine can take a good car and make it great!

Ford engineers have ?EcoBoosted? the 2.0-liter direct injection four-cylinder engine used in the standard Focus with a turbocharger creating 252-hp. That?s 92 horsepower and nearly doubled the torque (270-lb.ft.) over the base Focus engine. Pedal to the metal 60 mph times drop from 8.0 seconds down to 5.9 seconds and the top speed goes to 154-mph. 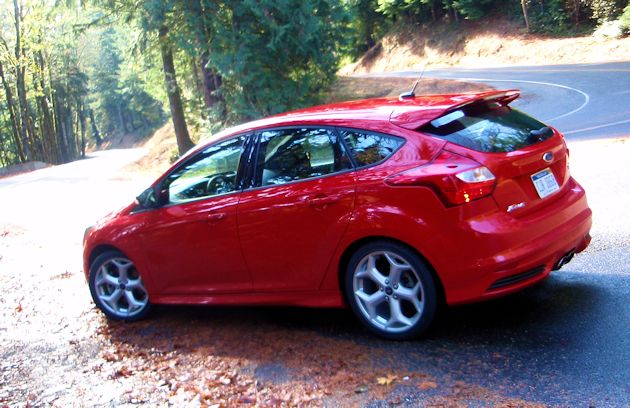 The 2014 Ford Focus ST is not the kind of car we wanted to drive to see how great the fuel economy can be, rather, it?s the kind of car we wanted to have for racing away from stoplights and running fast up a wide open mountain road. Still when driven normally it boasts an EPA rating of 23 mpg city, 32 mpg highway and 26 mpg combined. We averaged 24.8 mpg with most of the time spent doing the more ?fun? type of driving. On the down side, Ford suggests a premium fuel. 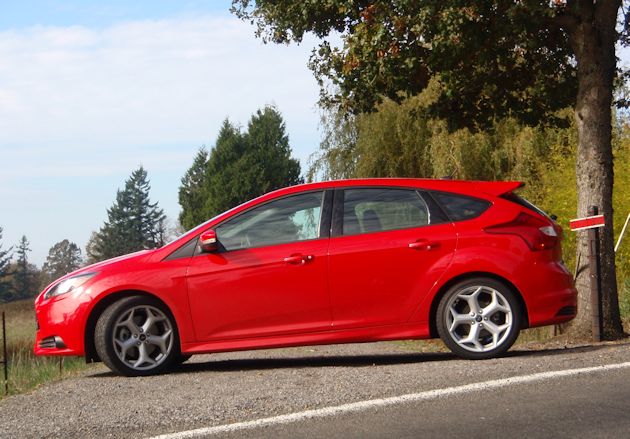 Power like this in a front-wheel drive could create a torque steer nightmare, but Ford engineers also reworked the chassis, suspension, steering, brakes and added wide 18-inch performance tires. The result is a car that feels well-balanced and agile, and doesn?t scream ?front-wheel drive.?

Surprisingly torque steer is minimal and only a factor when turning and accelerating. The variable ratio Electric-Power Assist Steering is quick, 1.8 turns lock-to-lock, but has a wide 39.4-foot turning radius which dampens the car?s agility factor a bit. The suspension upgrades improve the handling without compromising the ride; this makes the ST a good everyday driver in addition to having sports car driving characteristics. 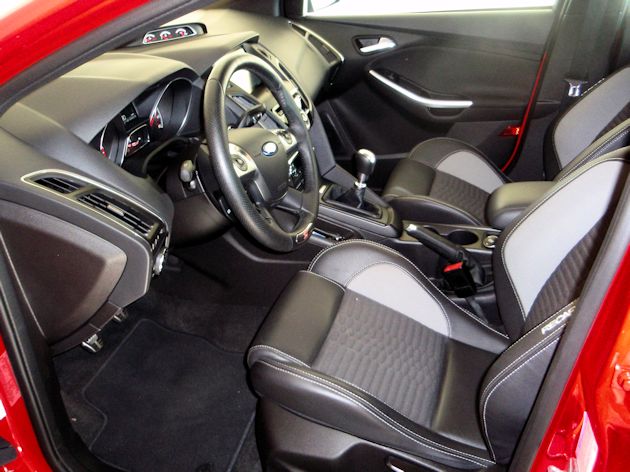 Ford engineers deserve high praise, too, for the great sounds created during exuberant driving. Not only does the deep-throated exhaust sound good outside on the street but they also used a sound symposer to pipe the engine acceleration sounds into the cabin to enhance the driver?s performance experience.

The combined result is outstanding performance and handling making the Ford Focus ST one of the most fun-to-drive compacts we?ve driven, lately. 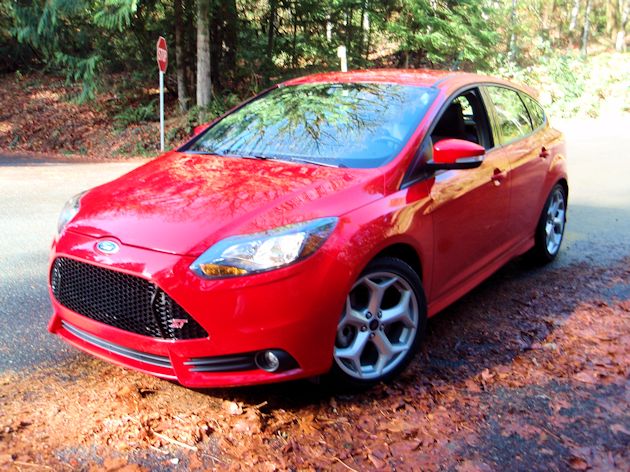 The Ford Focus ST is only available with a six-speed manual transmission optimized for performance with the sixth gear ratio set to maximize fuel economy. The transmission linkage is positive and shifts intuitively, without having an overly notchy feeling.
The driving experience in our test car was enhanced with the optional ST2 package which added great-fitting Recaro sport seats in front along with automatic climate control and an eight-inch display screen for the MyFord Touch?. 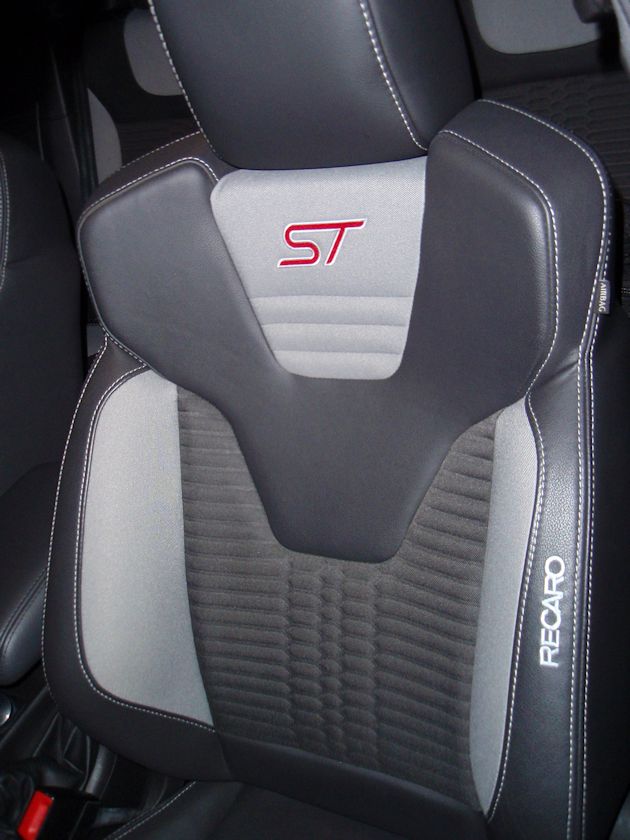 Our test car also included the My Ford Touch navigation and communication system. Each time we use the innovative MyFord Touch system our confidence improves, but it?s still complicated; and forget the voice commands ? we simply don?t do audio communications very well, it seems. Using the voice commands is almost as hard as learning a foreign language and we haven?t found a Rosetta Stone? language software for MyFord Touch. There will be a high learning curve for some people who are not tech savvy. We give Ford a lot of credit, however, for recognizing that this is a potential problem. They have been working hard to set up training for new buyers in the form of one-on-one tutoring at dealerships and by creating an extensive help system on the Internet. Perhaps we need to take that training.

A couple of the neat new additions to MyTouch are the 911 Assist that automatically sends help if you are in an accident and the airbag deploys. There is also a Vehicle Health Report that allows you to create a personalized online report of the vehicles diagnostics.

We give the five-door hatchback Focus high marks for exterior design. We especially like the five-door hatchback configuration for its utility, which allows the rear space to be easily reconfigured for passengers and cargo. The Focus will seat five adults, but is better suited for four. The high rear spoiler over the rear window looks good and we expect adds some aerodynamic values. 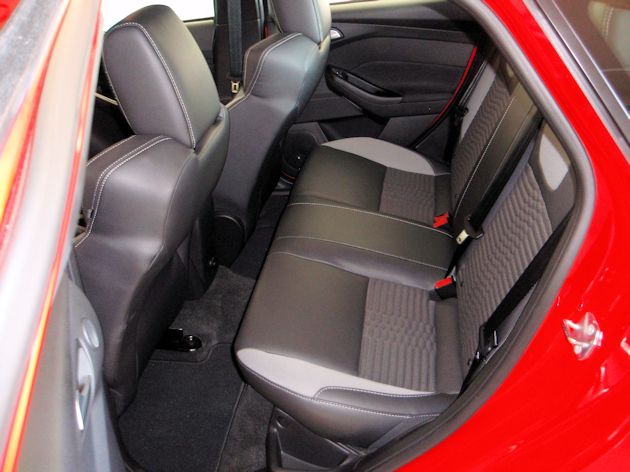 The interior, while quite functional and user friendly looks a little busy for our tastes. However, the quality looks more upscale and expensive than the price indicates.

Ford Focus pricing starts at $17,640, including the destination charge, for the Focus S sedan and goes up to $24,450 for the Focus ST hatchback performance model and approaches $30,000 when fully optioned.

The Focus ST competes with cars like the MazdaSpeed3 and Volkswagen GTI and is a Ford World Car, which means, the same model is basically the same where it is available worldwide. 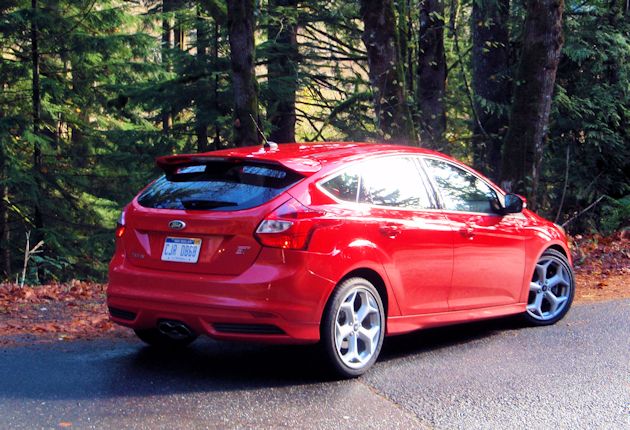 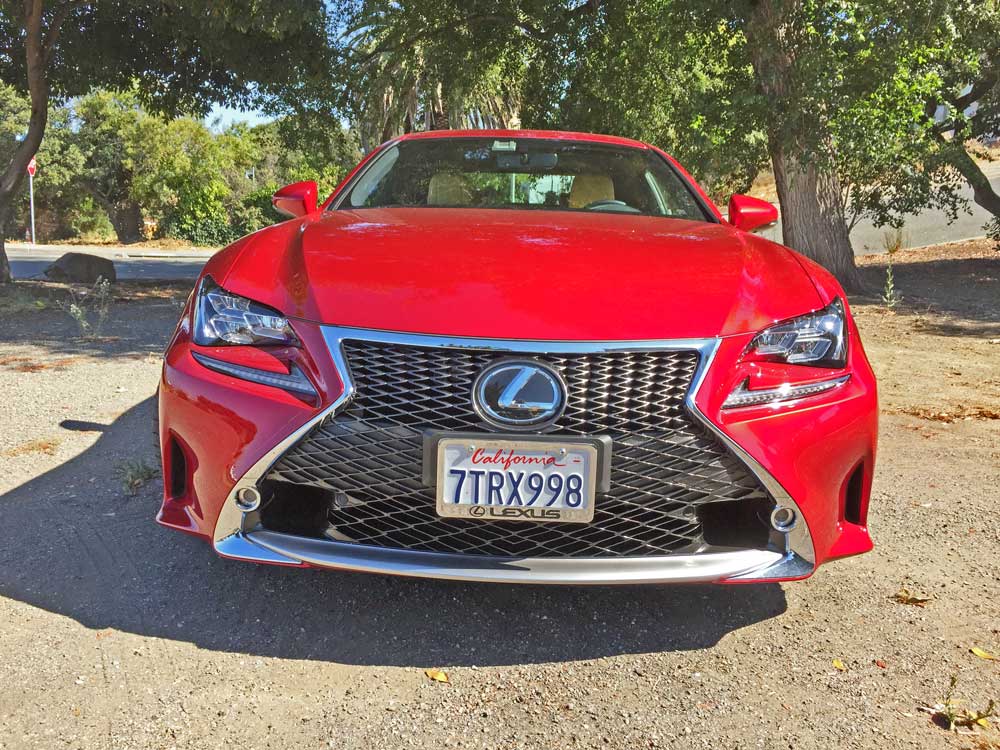