The Focus ST will be the first Ford to be fitted with the new 2.0-liter EcoBoost four-cylinder engine.? With 247 turbocharged horsepower, the Focus ST is bound to become a big hit with enthusiast drivers.

?EcoBoost technology has fully lived up to its billing, offering owners power and performance with uncompromised fuel economy,? said Barb Samardzich, vice president of Powertrain Engineering. ?Combining EcoBoost with Ti-VCT on a high-performance small car like Focus ST demonstrates our product commitment to yet another audience that perhaps hasn?t shopped Ford in a while.?

Compared to the 2.0-liter Ford EcoBoost engine planned for other Ford vehicles, the Focus ST unit features redesigned intake and exhaust systems and a unique engine calibration to deliver the desired level of power and responsiveness. 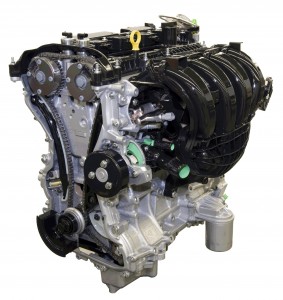 The turbocharger increases airflow in the engine to boost power while direct injection helps enable more efficient fuel burn for better fuel economy. Just like the first-generation EcoBoost engines, the EcoBoost four-cylinder engine will spool up quickly to its maximum torque; in this case, 250 lb.-ft. across a broad rev range ? estimated from 2,000 rpm to 4,500 rpm, according to preliminary Ford data.

?You get peak torque throughout the majority of the engine?s operating range,? explained Scott Makowski, Ford manager of North American four-cylinder powertrains. ?It?s available when you accelerate from a stop or merge onto the Interstate, and drivers don?t have to wait for the rpm to build before they get exhilarating performance. There?s torque ? and a lot of it ? whenever you need it.?

Working with the direct gasoline injection system, a state-of-the-art turbocharger ensures virtually lag-free operation at all engine speeds. In service, the turbo spins at up to 195,000 rpm and is designed for a life cycle of 150,000 miles or 10 years.

Traditional turbocharger ?whoosh? is mitigated by electronically controlled anti-surge valves that proactively relieve the boost in the intake, which can range up to 16 psi. Careful software calibrations manage the pressures in the intake manifold, and an air-to-air intercooler lowers air temperature before it reaches the engine, resulting in a denser, cooler intake charge.

The combustion system has been completely redesigned and re-engineered to take advantage of the EcoBoost system?s increased performance. The cam-driven high-pressure mechanical fuel pump operates at up to 2,200 psi ? more than 50 times the norm seen in a conventional four- cylinder engine.

The 2.0-liter EcoBoost is the first engine in the EcoBoost lineup to go truly global. Ford S-MAX and Galaxy, two people-moving products on sale in Europe, also were announced with a 2.0-liter EcoBoost option. In addition, the same engine will join the powertrain lineup for the Ford Falcon on sale in Australia.