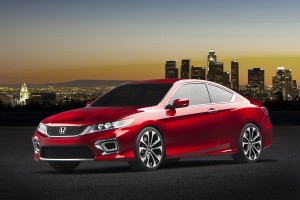 If history repeats itself, the striking new Honda Accord Coupe concept shown recently at the Detroit and Chicago auto shows should be a close rendition of the final product when it arrives at dealerships in the fall.

Described as athletic and muscular, the exterior has a distinctive wedge shape and complex sculptured sides.? The front has a revised four-sided honeycomb grille and deeply set multi-reflector headlights. The rear taillights sweep around to the side panel for better visibility and a trunk -lid spoiler follows a natural extension of the sculpted sides.? The rear end is finished with large exhaust finishers on either side of a rear grille.

This ninth generation Accord coupe is available with two all-new powertrains including Honda?s new Earth Dream a 181-hp, 2.4-liter i-VTEC? four-cylinder direct injection engine.? The engine is mated with either a six-speed manual transmission or new Continuously Variable Transmission (CVT). 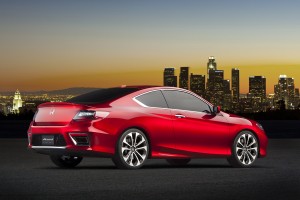 Top performance will come from the re-engineered 3.5-liter V-6 engine attached to a six-speed manual, or for the first time an available six-speed automatic transmission. ?The V-6 has the Honda Variable Cylinder Management? system that deactivates two or three of the cylinders, depending on the engine load, to improve fuel economy.

All 2013 Accord models will incorporate the Honda ECO Assist? system, which enhances fuel economy at the touch of a button, while also coaching system the driver to promote and confirm a more efficient driving style.
New safety technology available on the Accord Coupe includes a new Lane Departure Warning system and Forward Collison Warning. ?Both systems use a camera mounted behind the windshield to alert drivers if the car is moving out of its lane or to warn drivers of a potential collision in front of them.

The Accord is the first Honda to be outfitted with LaneWatch? blind-spot display, which uses a camera system mounted on the passenger mirror for an enhanced view of the passenger-side roadway. The Accord will also receive a rearview back-up camera and an Expanded View Driver’s Mirror as standard equipment. 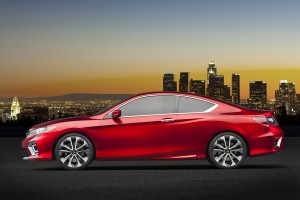 Another standard feature and first for the 2013 Accord is Pandora? Internet Radio interface, compatible with the Apple? iPhone?, which works with the vehicle’s audio controls and i-MID.