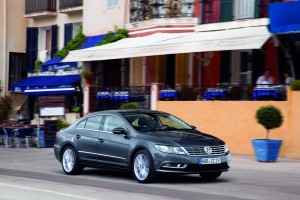 Half Moon Bay, Calif. ? As automotive writers, my husband, Bill and I continually reassess what car we would buy if we quit the business and had to drive our own car.? Of course, when you drive two new cars or more each week, the answer is a moving target, because it?s easy to fall in like with the new car that arrived on Tuesday, and then again when the other one pulls into our garage on Thursday.

In 2004, Mercedes-Benz introduced the CLS Class and coined the name ?four-door coupe?.? From that day on, I?ve been in major like with the four-door coupe look ? four doors for practicality and a sweeping coupe like roof line that makes the car look low, sleek and sexy.

While we could play the game, ?If I could have any car and price was no object? and my choice might be one of the growing list of four-door coupes that now includes such beauties as the Porsche Panamera, Jaguar XK and XF, Audi A7 and Fisker Karma.? However, I am a practical person and I know we wouldn?t be buying any of those $50,000 to $100,000 beauties. 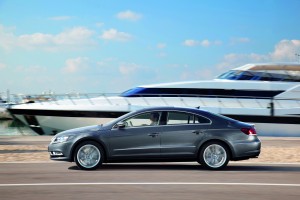 About four years ago, Volkswagen slipped into the four-door coupe segment with a very nice looking car called the CC, and that has been the car I keep coming back to, as the car I would buy if I quit the auto writing business.

The second generation of the CC recently debuted at Half Moon Bay, Calif., and I was lucky enough to be there to get one of the first chances to drive it.? It is still ?the? car.

Volkswagen designers didn?t mess with the flowing coupe-like roofline, but they did make some changes to the front and rear, that make it look even better.? The new look is more horizontal with more emphasis on the bumper and the grille, rather than having the grille dip in a ?V? shape to the bottom of the fascia.? This combined with a new slimmer bi-Xenon headlight pod make the car look wider and lower.? They also added a line of LED daytime running lights that run from the upper outside corners under the headlight.? I like it.

In the rear, the bumper is larger and the taillights are slimmer and more horizontal contributing to the wider, lower look. The new taillights have efficient LED elements that are arranged to further emphasize the horizontal look.? The clean functional interior gets only minor changes, one being the availability of three-passenger seating in the rear instead of the two seats with a bin between them.? 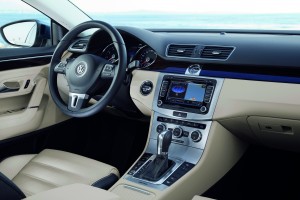 The engines are unchanged with just two options, a 2.0-liter turbocharged and direct-injected TSI? four-cylinder engine that generates 200 horsepower and the 3.6-liter narrow-angle VR6 engine that produces 280 horsepower.? The four-cylinder gets an EPA rating of 22 mpg city and 31 mpg highway, and the VR6 is rated at 17/25 mpg.? The turbo four-cylinder always feels more powerful than the horsepower would indicate.? My first choice, however, would be the Volkswagen TDI diesel engine, which gets more than 40 mpg in the VW Passat, which is about the same size.? Unfortunately, a diesel engine is only offered in Europe, at least for now.

The VR6 models have a regular six-speed automatic transmission.? The Lux is front-wheel drive, but the Executive uses VW?s 4Motion all-wheel drive.

The two VW engines produce a much different feel on the road.? The 2.0T feels light and agile, while the VR6 feels more heavy and solid because of the additional weight of the engine and 4Motion (for the Executive). ??The 2.0-liter turbo is one of my favorite engines in any car because it?s so efficient and has such good performance.? It accelerates from 0 to 60 in 7.3 seconds, but feels faster.? The VR6 is quicker at 6.3 seconds.

Pricing starts at $31,110 for the 2.0T Sport with manual transmission and goes up to $42,240 for the VR6 4Motion Executive.? Even the base model is well equipped with features like 17-inch alloy wheels, Bi-Xenon headlights with adaptive lighting (they turn with the steering wheel), automatic climate control, power seats, HD radio, and Bluetooth?.? All the models, except the Sport have a navigation system. 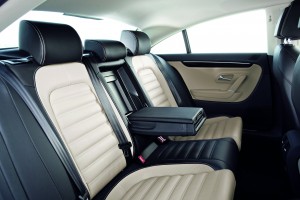 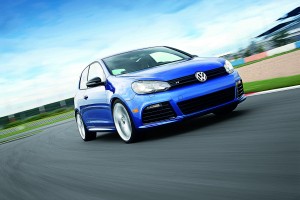 I also had a chance to drive the Golf R while I was in Half Moon Bay.? The Golf R is not a car I would want, but it?s a thrill to drive.? Starting with the compact two- or four-door Golf, the engineers install the most powerful engine they have ever offered in the U.S.? It just happens to be a 256-hp version of that same 2.0T engine I like in the CC (above). ?Then they equip the R with all-wheel drive and a six-speed manual transmission, and all the suspension, brakes, exhaust and other equipment necessary to handle the extra power.? Then the designers made it look like an R with flared side skirts and other body and interior upgrades. 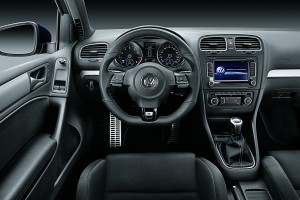 ? The result is a seriously fun-to-drive, road legal racecar. The R is capable of a 5.8-second 0 to 60 mph run and it?s amazing on corners.? This is the kind of car people are thinking about when they say, ?it handled like it was on rails.?

The world class performance of the Golf R has a starting price of $33,990 for a very well equipped car that includes features like Bi-Xenon headlights, leather seating, Bluetooth?, eight-speaker sound system and an in-dash six-CD changer, AM/FM/SiriusXM? Satellite Radio, and auxiliary input jack along with an iPod? adapter.? For $1,500, more you can add navigation, power sunroof, and the eight-channel 300-watt Dynaudio? premium sound system.? It?s pricy for Golf, but it?s not really a Golf, it?s the R and you know what that stands for? 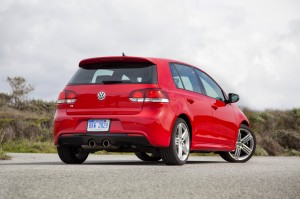