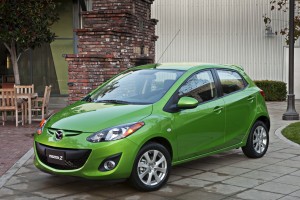 With U.S. subcompact sales expected to double in the next two years, Mazda is finally bringing their littlest car to the U.S. after a very successful three-year run in Europe and Asia.

Originally launched in 2007, the Mazda2 has won 48 automotive awards, including ?Car of the Year in Japan, New Zealand, Chile, Bulgaria and Greece along with being named the ?2008 World Car of the Year? at the New York International Auto Show.

Initially developed by Mazda engineers for the Mazda 2 and the Ford Fiesta, both companies have taken the same vehicle architecture and injected heavy doses of their own DNA with very few component duplications.

Mazda engineers placed a heavy emphasis on cutting weight with the Mazda2 tilting the scales at 2,306 pounds, which is about 150 pounds less than the Fiesta and a chief competitor, the Honda Fit.? The resulting five-door hatchback, even weighs less than Mazda?s signature sports car, the MX-5 or Miata.

Powered by a 100-hp, 1.5-liter four-cylinder engine, the Mazda2 has one of the smallest engines in its class, but thanks to the lighter weight, 0 to 60 mph acceleration times are about the same or faster as the major competitors.? Fuel economy with the five-speed manual transmission is 29 mpg city and 35 mpg highway; we averaged 33.4 mpg during a week of local driving.? The optional four-speed automatic gets 2 mpg less.? Some four-cylinder engines sound tinny or cheap, but the Mazda2 has a solid powerful sound both from the engine itself and the exhaust note.

Even though the automatic transmission was only a four-speed, it is smooth, makes positive shifts and does not leave the car feeling underpowered.? We did, however, prefer the better control offered by the smooth shifting five-speed manual shifter and we like the way the shifters are mounted on a peninsula jutting out of the center stack. 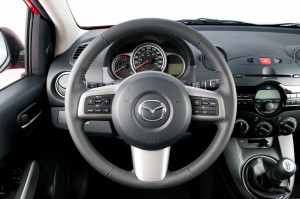 With important controls mounted on and close to the tilt steering wheel and the others tightly grouped in the center stack, the interior is an efficient workspace for the driver.? The stylish fabric seats with patterned insets and contrasting piping set the interior apart from a typical entry-level subcompact.

Available in two trim levels, Sport and Touring, the Mazda2 will likely be a top choice of many first-time new car buyers.? The 2011 Sport is priced at $14,730 including the destination charge. Both models are well equipped with features like air conditioning, keyless entry, power windows and other conveniences. 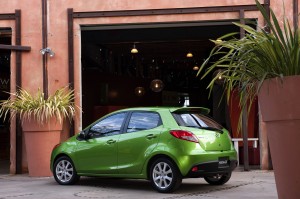 The Mazda2?s Zoom Zoom attitude was a favorite in our garage mainly because it was a joy to drive, agile and comfortable.

After spending a week in this very enjoyable little car, we could not help but wonder (hope) there might be a MazdaSpeed2 variant in the works.? Like with the MazdaSpeed3, it could take this littlest Mazda to another level.