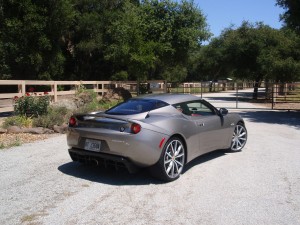 Monterey, Calif. ? I was talking to a couple of different friends a few days before going to drive the new Lotus Evora S.? They are both people I considered to ?know? about cars, but I was surprised by their descriptions the Lotus.? One thought it was an inexpensive small car and the other said it was a ?girl?s car.?

I knew better from what I had read over the years, but my actual time behind the wheel of any Lotus was limited to about 20 minutes of highway driving.? What I didn?t actually know, until later, was how awesome the performance is and how easy it is to drive. 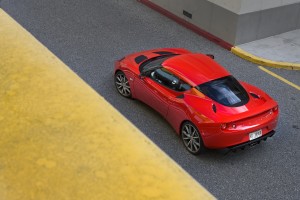 Lotus is a small British manufacturer that has been around since 1952.? They have a top reputation for building racecars and doing innovative engineering for other manufacturers.? Over the years, they have produced a limited number of sport cars under the Lotus brand, but only recently, they have started to make a much stronger push into production under their own brand. ?Last year at the Paris Auto Show, they shocked the industry by introducing five concepts.

Currently they produce a very limited number of niche sports cars annually.? The Elise was introduced in 1996 and the slightly larger Evora was introduced in Europe in August 2009 and in the U.S. in April 2010.? The Evora is more sophisticated than the Elise and more drivable on an everyday basis.? There have been about 1,300 Lotus Evoras sold worldwide, so far.? That makes this car extremely rare and exclusive putting it in the same category as some of the more prestigious exotic sports cars like Ferrari, Maserati and Lamborghini. 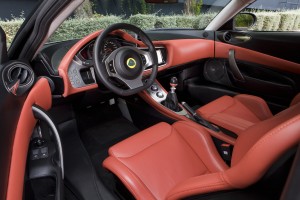 Like those exotics, the Lotus Evora is a head turner, as we found out while getting ready for our drive to Monterey outside a boutique hotel in the trendy San Jose shopping area called Santana Row.? Ferrari?s, Bentleys, AMGs and dozens of other high-priced cars are common in the area, so we were surprised by the intense interest in the Lotus Evora S.?? Many of the shoppers stopped to look inside the cars and others were taking photos with their cell phones.? The cars caused a definite ?buzz? on the Row.

On back roads headed south from San Jose, the Evora demonstrated several things.? First, the car is difficult to get into, especially for my six-foot four-inch driving partner, however, once inside, the car feels quite roomy and very comfortable.? The interior appointments are attractive and elegant with hand-sewn leather panels and aluminum trim.? The seats are nicely padded with well-structured bolsters to give a maximum lateral support while cornering.

There?s even a back seat, if you order the optional 2+2 configuration.? I did successfully get my portly body into the rear space, but didn?t have room for my feet, so the door could not be closed.? But, it?s a great place to toss jackets, purses or small pieces of luggage.? Without the option, there is just a package shelf, which really makes more sense.? Someone did suggest, however, that the Evora might qualify for a lower insurance premium, if it had a four-seat capacity, rather than just two. 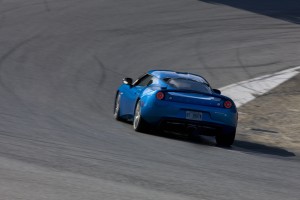 The Evora?s next feature that surprised me was how quiet the car was even at speed.? There is no wind noise, rattles or shakes, just one of the most rigid, solid cars I?ve driven.? That?s because the car is built from remarkably stiff aluminum frames.? I say frames, because separate front and rear sub-frames are mounted to the center frame to create the total unit, which is much more rigid and stronger than if it were only one piece.? There?s a similar frame structure for the drivetrain, which is mounted just behind the rear ?seat? making this a mid-engine car.

With the wheels off, the suspension and the aluminum frame structure looked like something from a racecar ? simple in design, elegant in execution and precise on the road.? It?s also appropriate too, because that?s what Lotus is most famous for, racecars. 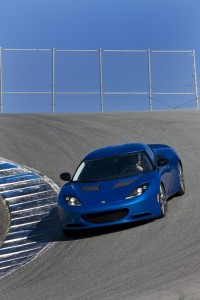 Arriving on the Monterey Peninsula a couple hours later, we turned into the renowned Mazda Laguna Seca Racetrack where we had a chance to see what the Evora could do outside the constraints of other traffic and those silly speed limits.? During my 20 years of car reviews, I?ve had a chance to drive some impressive cars, from Porsches to Vipers, and the Lotus Evora is one of the easiest and most forgiving cars I have experienced.? Even when taking the wrong line on a corner at speed is was easy to adjust.? The brakes easily pulled the car from speeds up to 110 mph down to the 30 mph necessary to make the double apex hairpin at turn two.? Evora even handled the famous ?corkscrew? turn as easily as turning into a driveway.

The Evora S is not the fastest car I have driven, but the performance numbers are very respectable:? 0 to 60 in 4.3 seconds and a top speed of 172 mph.

The biggest surprise is that the Evora is powered by a stock 276-hp, 3.5-liter V-6 engine from a Toyota Camry.? Lotus engineers only changed the engine electronics and the exhaust system.? Your mother probably drives this same basic engine in her Camry. 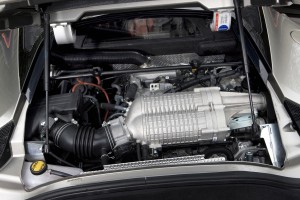 The Evora S, which I was driving on this program, has that same basic engine, but with a supercharger, which upped the horsepower to 345.? Rather than a temperamental, exotic engine, one of the most dependable engines in the business powers the Evora.? It even gets an EPA rating of 17 mpg city and 26 mpg highway ? not many exotics can claim numbers like that.

At engine speeds above 4700 rpms, a solenoid opens an exhaust protection valve, which redirects the exhaust so that it passes through only a small part of the silencing system.? This reduces exhaust backpressure to protect the engine, and of course, it makes the car go faster, and sound better.

The bypass is also open when the ?sport? button on the control panel is pushed.? When activated, it also increases the the traction slip thresholds, removes understeer recognition, allowing the driver more vehicle control before an intervention is required and it increases maximum engine RPMs from 6800 to 7200.? A little button pushing makes a big difference in the car?s character.

The six-speed manual transmission is precise and intuitive, and it too is from Toyota, just tweaked by those Lotus engineers.

Part of the secret to the dramatic performance is light vehicle weight, which is only 3,168 pounds and the rest is Lotus engineering magic.

One of the interesting additions is the Dynamic Performance Management (DPM) system developed by Lotus and Bosch engineers.? Standard equipment on both models, DPM changes the handling with Corner Brake Control, Drag Torque Control, Electronic Stability Control, ABS, Electronic Differential Lock and Traction Control. ?In short, the DPM makes you a better driver.? For drivers wanting to let it all hang out, the DPM can be totally shut off to allow the driver to experience the pure essence of the Evora. 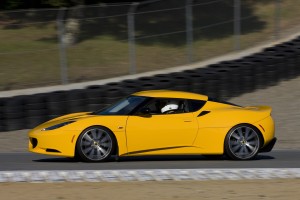 The Lotus Evora has a base price of $64,000, while the new Evora S starts at $76,000 for the 2+0 or $77,500 for the 2+2.? Load the S with the optional Sport Package, Tech Package and Premium Package and you get a beautifully appointed sports car with all the bells and whistles for about $90,000.? This fall, plans call for an IPS (Intelligent Precision Shifting) version with a six-speed sequential shifting automatic transmission and wheel mounted shift paddles.

Anyone shopping for a high performance sports car needs to check out the Lotus Evora, it has most of the appeal of an exotic sports car, plus it has several advantages over the exotics, and few of the negatives.