LaJolla, Calif. ? When I first drove the Hyundai Veloster at the September 2011 press introduction in Portland, Ore., the car?s captivating design, full features and low price made me think the car would have a strong appeal a segment of the new car market.

The only significant criticism I had at the time of the introduction was that it needed more power than the original 138 horses. ?For most shoppers, it had enough power, but for driving enthusiasts, it was weak.? At the time, I asked a Hyundai planner if a turbocharged version was in the works, knowing he wouldn?t comment future products, but I assumed his brief smile as he said, ?we don?t comment on future products,? could be read as a ?yes?.

????? Fast-forward eight months to the introduction of the Veloster Turbo — the next step in the company?s ?reverse halo? concept plan.? In Hyundai-speak, ?reverse halo? means drawing attention to the brand with a unique desirable car that everyone can afford, rather than using an expensive, low production, high-performance model (for example the Audi R8 or Chevrolet Corvette).

The concept appears to be working because Hyundai is getting lots attention, and they are selling all the Velosters they can make.? That amounts to about 3,000 to 4,000 per month.? To put those numbers in perspective, dealers, on average, are selling a Veloster within 12 days of receiving one, whereas competitive models are taking from 30 to 90 days to sell.

As the Hyundai planner?s smile indicated, the Veloster is now available with a turbo engine, but rather than stopping with just an engine and drivetrain enhancement, they made a new turbo model with distinctive styling, more features and 46 percent more horsepower. 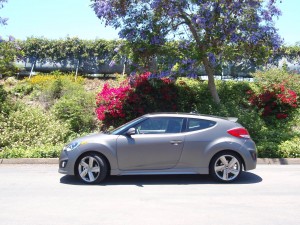 ???????? One other interesting feature offered only on the Turbo is a gray matte finish that costs $1,000 extra.? I?m not a big fan of the matte finish, but it seems to be a very popular feature offered mostly on high end European cars for as much at $4,000 extra.? The finish requires special care and can?t be used in a car wash.? Hyundai is including a special care kit with for cars painted with the unique paint. 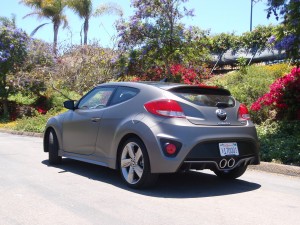 ??? With 18 pounds per square inch of turbo boost from the twin-scroll turbocharger, engineers were able to push the 1.6-liter four-cylinder direct injection engine to 201 horsepower and 195-lb.ft. of torque at 1750 rpms.? The original naturally aspirated engine made the 0 to 60 mph run in a respectable 8.8 seconds, and I would guess the turbo cuts at least two seconds off that time.?? In addition, the new performance engine is rated at 26 mpg city and 38 mpg highway by the EPA, the automatic drops the numbers to 25/34 mpg.

The car is nicely balanced, the steering is precise and the driving enjoyment is the same or better than cars like the VW GTI, Mini Cooper S and Fiat 500 Abarth.? Thanks to the extensive use of high strength steel and other weight saving technologies, the Turbo also has the lowest weight to power ratio of cars in this class. ?I experienced no torque steer during my time behind the wheel. 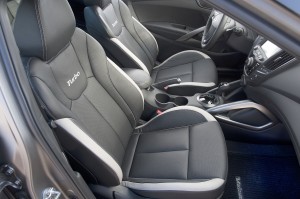 ?????????? The Veloster Turbo has one of the largest interiors in the category, which also includes cars like the Civic Coupe, VW Beetle and Mini Clubman, and the cargo space is a class leading 15.5 cubic feet or 34.7 cubic feet when the 40/60-split rear seat backs are folded.

With its unique four-door hatchback configuration (one door on the driver?s side, and two doors on the passenger side) access to the rear seat is very easy, and there is room for two average size adults in the rear.

Veloster Turbo, which is priced at $22,725, including the destination charge, has two available options, a six-speed automatic transmission with wheel-mounted shift paddles ($1,000) and the Ultimate Package that adds navigation with rearview camera, a panoramic sunroof, backup warning sensors, automatic headlights and 115-volt outlet ($2,500).

I asked the Hyundai Vice President, Product & Corporate Planning how they could put so many features in the Veloster Turbo and still keep the price point so low.? He explained they were able to do it mostly by keeping the build process simple.? By making nearly all features standard, they didn?t have to build each car differently and therefore saved money and time. ?Of course, that also means all the customers get a full-loaded car. 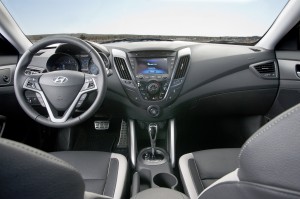 Shoppers looking for a car that has unique styling, high performance, good fuel economy and high value should get to the local Hyundai store, I think this car will sell quickly.