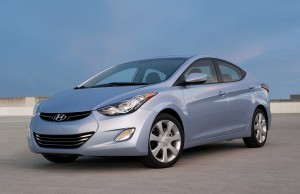 Remember in the 70’s when we used to have cheap economical cars that we called ?econo-boxes?.? Those small cars were basic transportation with good fuel economy at a reasonable price, but they provided little else in terms of comfort, performance or even safety.

The segment has changed thanks to cars like the Honda Civic, Toyota Corolla and a dozen others that have continued to expand their features and reputations in the entry-level market.? Today?s small car shoppers, many who are trading down to the smaller more efficient cars from entry-luxury and even luxury models, are demanding more comfort, styling, features and sophistication. 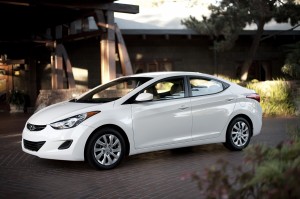 For the last four or five years I have expounded about improvements and advances by Hyundai.? While most companies have been moving up in single steps, Hyundai has been taking two or three steps at a time with each new or redesigned model.? The previous Elantra iteration put it on par with most of the competitors, but the 2011 version, arriving at dealers now, has pushed the Hyundai brand to new levels and in my estimation, to the top of the pack.

After a ground-up makeover, the new Elantra comes out as a car larger in most dimensions so that the interior now measures mid-size by EPA standards surpassing the major competitors.

The Elantra styling earns high marks simply because it has a strong resemblance to the larger Hyundai Sonata that has been setting sales records with its head-turner. ?Hyundai describes this ?Fluidic Sculpture? design execution as interplay of wind with rigid surfaces to create the illusion of constant motion ? I call it sweeping, sexy lines.

The front-drive Elantra gets its power from an all-new 148-hp, 1.8-liter four-cylinder engine. ?In the redesigned format, the engine dropped 74 pounds of ugly fat and gained 18 percent in the fuel economy column, ending up with an EPA rating of 28 mpg city and 40 mpg highway.? With the exception of some higher priced ?ECO? models, the Elantra offers the best fuel economy for this class.

The engine is outfitted with a complex sounding Dual Continuously Variable Valve Timing camshafts and hydraulic engine mounts.? What it accomplishes is really good fuel economy and a smooth engine that doesn?t shake the car while it?s idling at the stoplight. ?It also comes in a super clean PZEV version that gets a few less ponies and foot pounds of torque but meets the strict environmental guidelines of California, Oregon and some Northeast states. 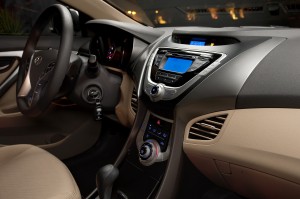 Another element of the high fuel economy story is the transmissions — a standard six-speed manual and new optional six-speed automatic with Shiftronic manual control system.? It?s the first time Hyundai has offered a six-speed automatic in a smaller model.? The automatic, which was developed by Hyundai, shows the level of sophistication by this company.? Most companies are buying the technology from someone else.? Like the new engine, the new transmission is also lighter than the previous five-speed.

Attached to the road by 15- 16- or 17-inch tires, depending on the trim level, the Elantra has a McPherson strut front suspension with coil springs and gas shocks.? The rear is a lightweight torsion beam system designed to enhance steering stability.? All versions have a precise-feeling electric-assist rack and pinion steering system that provides a tight turning radius of just less than 35 feet.? While I have never looked at previous Elantra models as being ?tossable? or as having great handling, but this new one qualifies.? It has agile responsive manners that make it a lot more fun than just basic transportation. 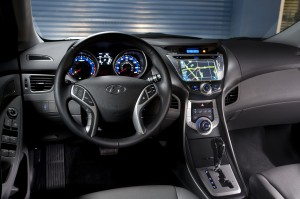 Often less expensive cars tend to skimp on interior appointments, but Elantra doesn?t. The Limited version includes standard features like leather seating with heated front and rear seats, sunroof and a long list of power features at a base price of $20,700.? For $2,000 more the premium package adds an excellent built-in navigation system with touch screen and voice activation, rearview camera, premium audio and proximity key entry with push button start.

The Limited is a no compromise model with luxury characteristics. ?The navigation-equipped car also includes Bluetooth streaming audio, XM radio with traffic, weather, stocks and other information services.? It even has the ability to upload personal pictures from a USB memory stick to the navigation screen 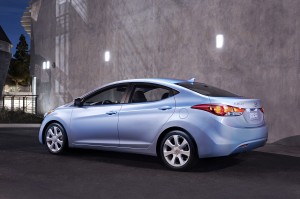 Both models have the full package of advanced safety equipment including stability control and all the brake assists.