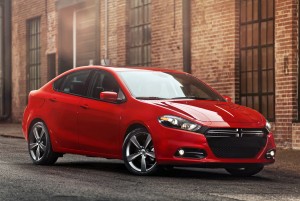 Austin, Texas ? Driving down the main street of the town I live in southern Washington the other day I saw it parked in a vacant lot facing the street ? a 1965 Dodge Dart 2 dr. sedan.? The sign in the window read ?For Sale? with the phone number to call. They sure don?t make them like that any more?thank goodness.

This was further brought to my attention, because I had just returned for the introduction of the all-new Dodge Dart, and wow, what a car!

The new Dart is a compact, about the same size as a new Volkswagen Jetta or Chevy Cruze.? On the inside, Dart is larger than most compacts, with an interior that qualifies as a mid-size.? ?????? 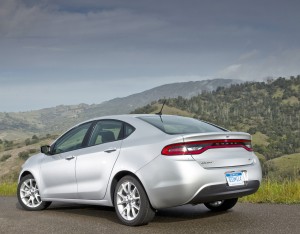 ?????????? Chrysler officials don?t talk much about Dart?s Italian connection, but for the record, the new Dart is derived from the Alfa Romeo Giulietta mechanicals including the unibody platform and front and rear independent suspension.? The platform was stretched longer and wider to fit the design requirements to the new Dart.? Although most of us have never had an opportunity to drive a Giulietta, I understand they are highly regarded in Europe.

Dodge designers, were ?in the zone? when they penned the new Dart, creating a head-turning design distinctive from the rest of the compact sedans.? From the front, there?s no mistaking the Dodge heritage with the latest interpretation of the ?split cross-hair? grille.? The profile is extreme wedge, ?with a sweeping roofline and large wheels and tires .

Dart planners wanted this to be a car that allowed shoppers a broad range of customization, right off the showroom floor.? In fact, there are more than 100,000 ways to customize the Dart from the five trim levels, three powertrains, 14 interior combinations, 12 exterior colors and six wheel choices.? If that?s not enough, there are 150 Mopar? accessories available with a variety of grilles, hoods, exhaust systems, shifters, steering wheels, and more. 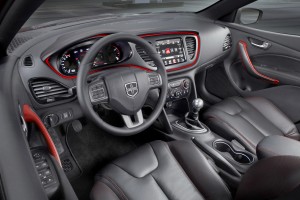 ?I loved the new Dart interior, and so did WardsAuto World, which picked it as one of the ?Wards 10 Best Interiors? for 2012.? The cockpit style interior has a surprising use of color to set off certain areas.? I especially like the instrument cluster with the center mounted seven-inch reconfigurable gauge cluster display.? It is customizable with choices of digital or analog gauges, an eco-meter, navigation or many other displays.

The touch screen system (standard on the R/T and Limited and optional on the SXT and Rallye) is mounted just to the right of the steering wheel at the top of the center stack.? It is one of the best and most user-friendly systems, I?ve used.? The large 8.4-inch screen has large icons, which control navigation, communications, audio and climate functions. ?The system responds instantly with none of the delays common with some touch screens in cars.? It can also be used to control voice activated Bluetooth?, Sirius XM Travel and weather functions. 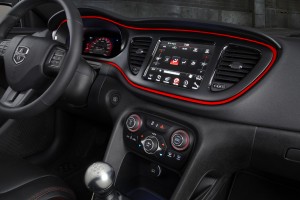 The Dart?s safety menu is impressive, too, and some features are functions on the same display screen.? For example, the Uconnet Voice Command allows the driver to operate a Bluetooth compatible phone hands free. ?It also has ParkView? rear backup camera and the segment-exclusive Rear Cross Path Detection, that warns when another vehicle is about to pull behind you as you are getting ready to back out of a parking place. 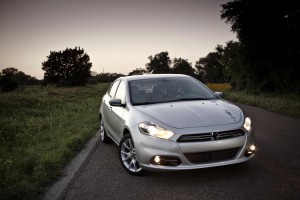 The front-wheel drive Dart engine lineup includes three four-cylinder engines.? Standard equipment on all models, except the R/T is the all-new 160-hp, 2.0-liter Tigershark DOHC engine mated to either a six-speed manual transmission or optional six-speed automatic. ?With the manual transmission, this engine is rated at 25 mpg city and 36 mpg highway by the EPA.

The optional engine on all models except the R/T is a 1.4-liter MultiAir Turbo.? It?s the same engine that powers the hot Fiat Abarth.? Rated at 160 hp, too, this engine produces 36 more lb.ft. of torque, which gives it a little better acceleration and sporty nature.? It also gets better fuel economy earning a 27/39 mpg rating from the EPA. ?It also has the same six-speed manual or an optional automatic configuration as the 2.0-liter Tigershark.

The third transmission, which will be available in the third quarter, is an efficient new six-speed dual dry clutch model.? It will be an option on both the 2.0-l and 2.4-liter Tigershark engines.

The R/T performance model, which comes in the third quarter of 2012, gets a 184-hp, 2.4-liter Tigershark engine.? Fuel economy numbers have not been released for the R/T.

Dodge has already announced they are making an Aero model that will get up to 41 mpg in highway driving.? There are also rumors of a 300 hp SRT performance Dart in the works.

The new Dodge Dart is nothing like your father?s or uncle?s Dart.? This is a well-built sophisticated car that is fun to drive.? It certainly gets high marks, too, for fuel economy and the high level of technology.? The Dart is right on target! 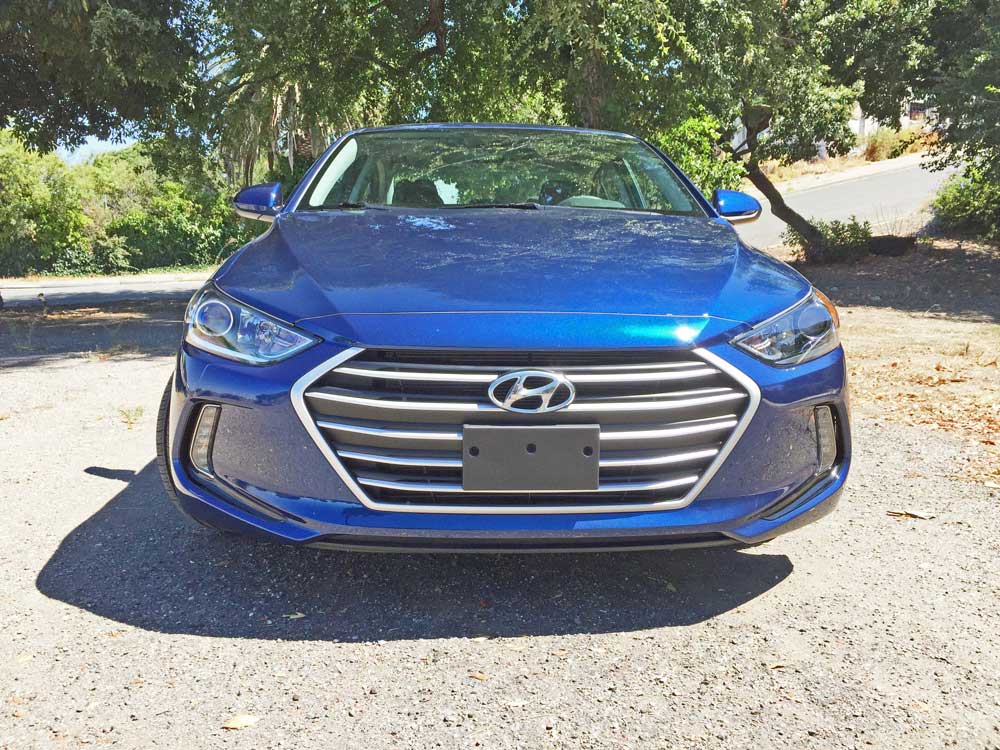