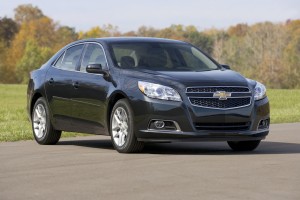 Austin, Texas — There?s an old adage that says, ?Put your best foot forward?, and that?s exactly what Chevrolet is doing with the introduction of the new Malibu.? With gasoline pumps becoming all too familiar with the $4 a gallon gasoline, the Chevy planners are sending out the fuel-sipping Malibu Eco first as an introduction to the all-new Malibu lineup.? After all, who can argue with a gasoline powered midsize sedan getting fuel economy of 25 mpg city and 37 mpg highway.

Chevrolet is also expanding their market with the new Malibu; it will be the first midsize sedan sold globally in nearly 100 countries.

?The Malibu Eco is a smart choice for customers who want a great looking car inside and out with excellent fuel economy, but without the higher price of some hybrid sedans,? said Russ Clark, director of Chevrolet marketing. ?In short, it?s an incredible value.?

The new Malibu looks good, but I wouldn?t say that it?s better than the previous generation, which I liked a lot.? However, from an aerodynamics standpoint it looks great.? After four hundred hours of wind tunnel testing, design engineers were able to make significant improvements and the final product has a 0.29 coefficient of drag ? that?s as good as the streamline Chevy Corvette.? They also did some active aerodynamic improvements like adding shutters in the lower grill that close automatically at speed to cut aerodynamic drag and underbody panels to improve the airflow under the car. 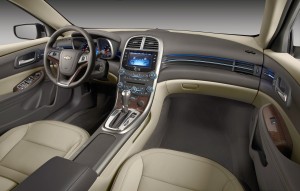 The two-tone interior has a distinctive cockpit-like appearance that wraps around the driver and front seat passenger.? The area uses tasteful accents of faux wood and metallic trims. Controls are large and well marked, especially in the center stack.?? The instrument panel has two large pods for the speedometer and tachometer both of which have a smaller analog instrument in the bottom of the dial.? A small digital screen between the two pods displays a menu of further instrumentation along with a helpful trip computer.

The roomy interior is filled with quality-looking materials, soft touch surfaces and storage features, including a hidden compartment behind the touch screen. At night, the interior gets a cool looking ice blue ambient lighting.

Malibu is one of the first Chevy models to get the optional MyLink communications system.? Like many similar systems used by other manufacturers, it links with a smart phone through a Bluetooth connection.? This connection allows the car to be linked seamlessly with online services like Pandora? and Stitcher SmartRadio? to provide customized in car entertainment.? It also allows the driver or a passenger to stream audio directly from a smartphone into the Malibu?s audio system.? MyLink has hands-free voice controls so the driver can keep his or her hands on the wheel when making adjustments or phone calls.

To achieve the excellent 25/37 mpg fuel economy ratings, the Malibu Eco uses a 182-hp 2.4-liter Ecotec four-cylinder engine and an electric motor. The system is actually a mild hybrid and its standard equipment on the Eco model.? The alternator on the Ecotec engine is replaced by the water-cooled electric motor-generator, which is attached to the engine?s belt system.? Working in conjunction with the next-generation six-speed automatic transmission, the motor provides a ?boost? to the gas engine during acceleration and on hills. The motor is powered by a 32-cell, 0.5 kW lithium-ion battery pack mounted in the floor between the rear seat and trunk.? The battery is small enough that the rear seats can still be folded to improve cargo capacity when needed. ??Chevrolet says the Eco accelerates from 0 to 60 mph in 8.8 seconds. 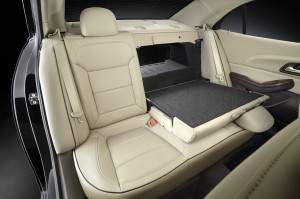 The eAssist system also uses a start-stop system that shuts down the gas engine at traffic stops.? These starts and stops are nearly undetectable, making this one of the smoother systems I?ve driven.

Out on the road, the Malibu is a quiet and comfortable drive.? At normal highway speeds, the car displays good control, a solid ride and no body lean. I didn?t get a chance to push the car for a demonstration of high-speed characteristics but I don?t think this is a car that will appeal to aggressive drivers.

The base Malibu Eco1SA model has an MSRP of $25,995, including the destination charge.? At that price you?re getting a well-equipped car with mild hybrid features, a full spectrum of Chevrolet safety equipment, leather seating surfaces, OnStar and a seven-inch color touch screen audio system with all the features like Bluetooth and SiriusXM radio.? The Malibu has all those normal features I expect like air conditioning, cruise control, power windows and locks and so on. There are also four available option packages.? An upper level model, 2SA ($27,605) adds several convenience features like remote start, universal garage door opener and backup camera. 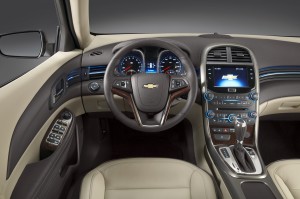 The new Malibu Eco with eAssist is a good way to get many of the hybrid benefits without having to buy a hybrid.? Drivers like me, who don?t always have to make jackrabbit starts or insist on driving at 10 mph over the speed limit (like my husband) could see fuel economy numbers approaching 40 mpg.? In addition, I give the Malibu high marks for style, comfort and a quality appearance.? 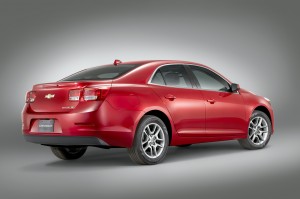