Built by a Bunch of Passionate Car People 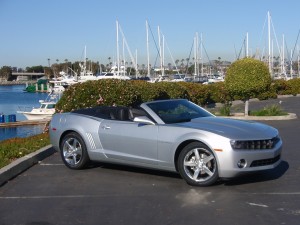 San Diego, Calif. ? Going to a new car introduction provides a different prospective than spending a week driving the car at home.? At most introductions, the auto companies bring in designers, engineers and other people responsible for the company?s latest creation.? It gives the journalists a chance to ask the ?why? questions that don?t get answered by simply driving the car or digging through a press kit.

The Chevrolet Camaro Convertible introduction was no different, but one thing that stood out from the standard lines of discussion?these guys were more passionate about the products than the typical bunch of ?internals? (people who work for the company).

Most of the people responsible for developing and building the new Camaro Convertible were owners of previous generation Camaro Convertibles and some still had an older model in their garage.? As a result, this new Camaro was spawn by dreamers who were thinking, ?If I could build a new one myself, what would I do?? or ?Here?s my chance to build it the way I want it built.? 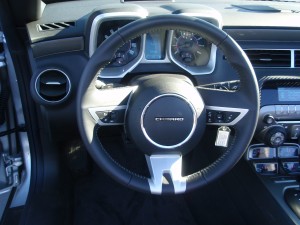 Normally the ?convertiblization? of a coupe involves compromises.? There are structural and handling challenges plus a multitude of problems that arise as the conversion progresses.? Then there?s the problem of weight gain, which for this car was 253 pounds for an already hefty car.? However, the extra weight appears to have been put to good.

One of the challenges in building a convertible is to keep the body structure ridged. Over the years, I?ve driven some convertibles that shook like a bowl of Jell-O on rough roads, but the Camaro is almost rock solid, with no noticeable cowl shake, body twist or rattles.? Starting with that solid structure, engineers were then able to develop the drivetrain components to maximize the performance and handling of the car.? And the results are impressive. 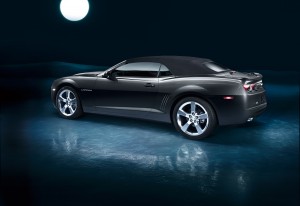 The attractive Camaro top is cloth with an acoustical headliner that produces a near coupe-like quiet when in place, but like most convertibles, it creates a large blind spot at both rear quarters (actually the coupe isn?t a lot better).? Rear visibility is best handled by keeping the top down as often as possible, but when the top is in place Chevrolet has conveniently provided Ultrasonic Rear Park Assist as standard equipment on all models of the Convertible.? This makes backing up blindly a little safer.? I would like to have seen a backup camera and blind spot indicator system too, but they are not offered.

While on this subject, the other thing not offered is a map-based navigation system.? All Camaros come with standard OnStar with the very efficient Turn-by-Turn navigation (for the first six months), however, I am a visual guy, and I prefer to see where I?m going on a map, not just hear the instructions.

Dropping the top is simple ? twist the one center-mounted latch, push and hold the overhead-mounted switch for about 17 seconds, and the top folds in a depression behind the rear seat backs.? Once in place, upper level models are outfitted with a one-piece tonneau cover to add a more finished look.? The tonneau is an option on the two base models, and I?m told by a reliable source that tonneau installation is challenging.

The top is available in tan or black cloth. I could feel very little difference, if any, between the handling and performance of the Convertible as compared to the coupe.? Both have a solid, almost heavy road feel and stay flat in the corners.? At higher speeds, with the top down, ?the cars feel well planted, and when needed the Brembo brakes (standard equipment on the SS) do an excellent job.? I also appreciate the tight 38-foot turning radius. 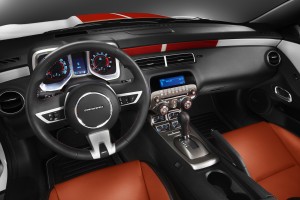 Standard performance features on both SS models, including the Brembo brakes, 20-inch wheels and performance suspension.

Both of the upper level models (the 2LT and 2SS) include goodies like heated leather seats, convenience and connectivity package, a gauge cluster mounted on the console and Bluetooth.?? A fully loaded 2SS tops out at nearly $52,000 when a buyer goes crazy and checks all the option boxes.

The Camaro Convertible was selected to be the 22nd Chevrolet to pace the Indianapolis 500 Race on Memorial Day this year.? Collectors will likely flock to the 50 special editions replicas that will be offered after the race.? Prices have not yet been announced for the white and orange convertibles which are decorated in the same scheme at the famous 1969 Camaro Indy Pace Car.

Chevrolet is serious about this new Camaro Convertible so they made it good, and they made it fast.? All those passionate Chevy people got exactly what they wanted.