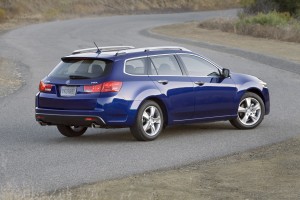 As the smallest of the three Acura sedans, the TSX dimensions are most similar to cars like the Audi A4, BMW 3 Series and Subaru Legacy.? It is also the most sporty and fun to drive of the Acura luxury lineup.

For 2011, the TSX has received significant changes to the front fascia and chin spoiler, plus underbody panels have been added to improve the aerodynamics.? The rear end was changed to make the 2011 model distinctive from the previous version. 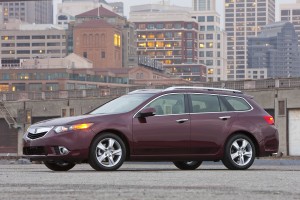 The most significant change, however, was the addition of an entirely new model, the Sport Wagon.? This is good timing for Acura with popularity on an upswing as many manufacturers introduce wagons for the first time.

The Sport Wagon has the same distinctive Acura family front end as the TSX sedan, but from the B-pillar back the roofline makes a gradual sweep down toward the rear, while the beltline converges upward toward the rear pillar.? The result is a strong impression of forward movement. 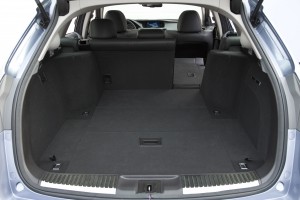 At 25.8 cubic feet, the space created inside the power tailgate is nearly 12 more feet than the sedan.? Lower both sides of the 60/40 split rear seatbacks and the cargo area grows to 60.5 cu. ft. making it one of the largest spaces in the class and even more roomy than some of the compact SUVs.? The result is room enough for four full-size golf bags or dozens of shopping bags.

With typical Acura efficiency, the cargo area also includes a 2.4-cu. ft. storage area located beneath the cargo floor, smaller areas hidden behind removable side panels and a retractable cover over the whole space.? The cargo floor is at a convenient 24-inch height for easier loading plus the space incorporates a variety of tie-down hooks for keeping cargo items secure.

Like the base TSX sedan, the Sport Wagon is powered by a 201 horsepower DOHC four-cylinder engine.? Honda engineers worked their magic with the i-VTEC? ?intelligent? valve control system and the result feels much stronger than the horsepower rating indicates.? The wagon is not offered with the 280-hp V-6 option.? If the Sport Wagon sales are strong, I think Acura might consider a V-6 performance option, because all the development work has already done for the sedan. 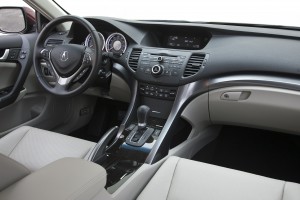 The front-drive wagon is only available with Acura?s five-speed automatic transmission.? The transmission has been reprogrammed for 2011 to allow the driver to downshift to use engine braking without having to shift the transmission into the Sport mode. ?New for 2011 is a transmission fluid warmer that improves shift quality along with transmission durability and fuel economy when used in colder climates.

With the wagon weight only about 130 pounds more than the sedan, acceleration is about the same at an estimated 0 to 60 mph time of 7.5 seconds.? The EPA projects fuel economy of 22 mpg city and 30 mpg highway compared to the sedan?s 22/31 mpg numbers.

The Sport Wagon is at Acura dealers now with at a base price of $30,960 including the destination charge and at $35,470 when equipped with the Tech Package (navigation, rear camera and premium audio system).? The four-cylinder sedan is $30,470 and the V-6 is $36,010 with the Tech Package adding $3,100 to either of the sedans. 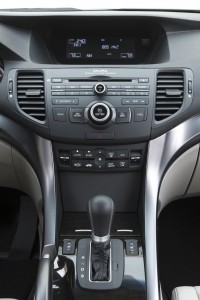 I think all cars should have an overhead passenger assist handle on the passenger side, two good drink holders, heated front seats, rearview backup camera, an easy to use satellite radio system, blind spot warning and a user friendly navigation system. The Acura TSX has six of the seven, with the blind spot warning system missing.

As I have said on many occasions, I think the Acura navigation system is one of the best systems on the market today. It is even better in 2011 with the new LED backlit VGA screen, which improves the resolution by 400 percent. ?The controls are intuitive and easy to understand.? I also like the fact that a destination can be added while the vehicle is moving — not by the driver, but by the front seat passenger. ?The navigation system is part of the Tech Package which also includes a 60GB hard drive that can store more than 3,500 songs.? New this year is a Song By Voice? system that allows you to request a song verbally without searching through lists.

The TSX Sport Wagon has a long list of advantages and few negatives.? In the negative column there is no available all-wheel drive and some shoppers prefer the better visibility offered by higher vehicles.? In the plus column, lower ride height, makes easier ingress, egress and cargo loading.? The lower center of gravity also makes it handle better and more safely.? I recently spent more than a week driving the sedan with the four-cylinder and the six-speed manual.? Normally, my preference is for automatic transmissions, but the Acura manual is so smooth and instinctive, I?d have a hard time choosing between the two.? Both the TSX models are luxurious, comfortable, well-built and excellent values, however, if I were buying, I?d be very tempted by the Sport Wagon. 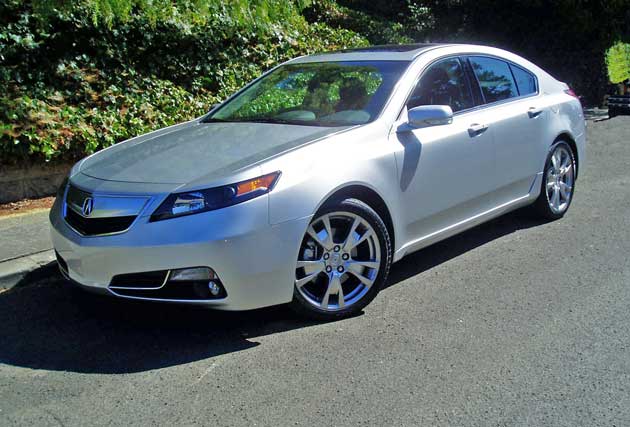