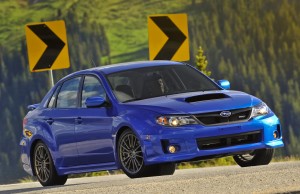 Aspen, Colo. ? The idea of spending time in a playground of the rich and famous was appealing, and the fact that I would be getting to drive the new Subaru WRX? and WRX? STI? was a bonus.? What I didn?t realize though, was how much Aspen?s 8,200-foot elevation would affect me, or even worse, how much trouble I would have breathing when we drove to Independence Pass, elevation 12,095 feet.? At that altitude, I had to suck on canned air just to be able to move around.

Fortunately, the turbocharged engines of the Subaru WRX and the STI do much better at altitude than I do.

Over the last eight years, the Subaru WRX has reached a cult status because it delivers more performance per dollar that other car on the market.? For 2011, Subaru made a few simple changes to the WRX and STI lineup that not only expands their offerings, but it makes the manufacturing process easier. In simple terms, both models are now offered only in wide-body versions (previously only used for the STI) of the four-door sedan and the five-door hatchback (sometimes referred to as a wagon). ?The trim levels are simple, too, with the WRX offered as a base, Premium and Limited version and the STI offered as a base or Limited.

A 2.5-liter, flat-four boxer style engine powers both cars.? The WRX is rated at 265-hp, and modifications jump the STI to 305-hp.? The WRX has a five-speed manual transmission and the STI has a six-speed manual.? Both cars have Symmetrical All-Wheel Drive, but the STI version has a Driver Control Center Differential with three performance modes, and six driver-selectable differential locking settings. ?There is a trend here.

The WRX can be purchased in two body styles and three trim levels and has a starting price of around $26,000 including the destination charge.? It accelerates from 0 to 60 mph in about 5 seconds and has a top speed of more than 140 mph.? Did I mention that it has all-wheel drive and gets 25 mpg, too? 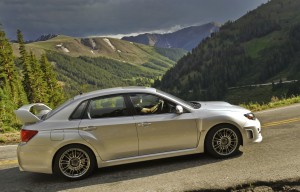 Shoppers wanting the best, can buy the same car, only modified and called the STI.? Except for some safety equipment like a roll bar, etc., the STI is a full-fledged rally car.? It has wider fenders, larger tires, a sophisticated Vehicle Dynamics Control system with three driver-selectable modes, Symmetrical All-Wheel Drive with Driver Controlled Center Differential and several other performance enhancements.? Priced at around $36,000, the STI makes the 0 to 60 mph run in 4.9 seconds, has a 158 mph top speed, and like Subaru says you ?Get more Gs.?

I got to experience what ?getting more G?s? meant at the Aspen Motorsports Park, which at the 7,890-foot level is billed as the highest racetrack in North America. ?The tight 1.1-mile paved road course and autocross course set up on a straight stretch of the track allowed me to experience the performance enhancements of the new STI after driving the 2010 and 2011 models back to back.?? I am certainly no race driver, but I could feel the improvement. 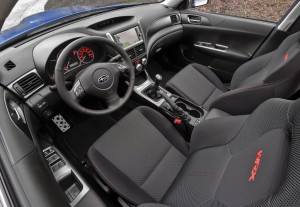 The WRX is my favorite of the two performance Subarus and it is the most popular.? It is a more comfortable and drivable while still being extremely fast.? In early years, WRX models were somewhat austere inside, but the new models are well equipped with features like premium audio, power windows, cruise control etc.? Upper level models add leather, heated seats, moonroof and HID headlights, while options include touch screen navigation, Bluetooth and Sirius satellite radio.