The final Viper is scheduled to roll off the Conner Avenue Assembly Plant in Detroit, Mich. around noon on July1, 2010.? Viper Club of America (VCA) members will be gathering for a special event and group photo.

The final current-gen Viper will enter the world into the waiting arms of D?Ann Rauh (the lucky owner of the final modern-day Viper) when takes ownership of her historic Snake. Rauh and her husband Wayne together own the largest private Viper collection in the world.? The collection will grow to 31 Vipers when this last one reaches their home in Arp, Texas. 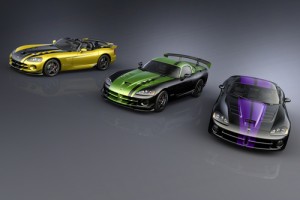 The event will include a special ceremony and some yet-to-be-revealed guest speakers.

Immediately following the historic Viper?s birth, VCA attendees and special guests will head over to the Walter P. Chrysler Museum, in the shadow of Chrysler Group LLC?s world headquarters, for a reception of drinks and appetizers. The museum will also boast an added attraction? Born to Race ? Dodge Viper Racing Heritage, featuring an amazing collection of the most significant Vipers to hit the streets and the track since the Viper debuted in 1989 as a concept car.