An Italian driveline specialty company, Oerlikon Graziano, is working with British control systems specialist Vocis, on a transmission that could make a significant impact on electric vehicle range and performance, as well as allowing for a reduction in battery pack size.

Prototypes of the novel, multi-speed transmission for electric vehicles (EVs) have begun on-road testing with an unnamed European vehicle manufacturer.

Because a typical electric vehicle motor operates of a wide maximum torque range, manufacturers have used only a single transmission gear ratio.?

?Electric motor efficiency drops off at low load levels and towards the extremes of speed,? explains Vocis technical director, Richard Taylor. ?Multiple gear ratios with electronic control allow the motor to be kept in the region of greatest efficiency for a much higher proportion of the time, allowing significant range extension.? 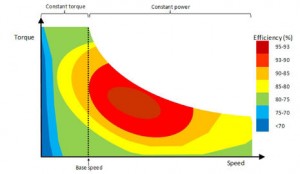 The extra ratios also remove the compromise between top speed and hill-climbing ability. ?An EV will typically have a transmission ratio that is higher than the ideal, simply to give it enough top speed,? says Taylor. ?With multiple ratios, we can provide much better laden pull-away as well as improved top speed without increasing the powertrain size.?

As a leading supplier of double clutch transmission technology, Vocis is using a similar concept for the EV transmission. The Vocis multi-speed transmission works with two small e-machines, each on an independently controlled shaft.

The design allows the distribution of drive and recovered energy to be balanced between the two e-machines, with seamless changing provided by torque infill during each shift. ?The torque infill makes gearshifts so imperceptible that the first customer for the system asked to be shown that shifting was taking place because he couldn?t feel it when driving,? says Taylor.

Electronic control provides full driveline integration which, combined with multiple ratios, will also allow the implementation of alternative calibrations in order to tailor the feel and performance of the vehicle to the driver?s personal preferences or to match brand characteristics. It also provides the facility for strategies such as automatic ratio optimization to maximize range.

Because the technology is readily scalable, including the number of ratios, it is easily applied to a diverse range of vehicles, as Taylor explains. ?The priority for a passenger car application is to increase the performance to that of a conventional car by improving acceleration and top speed,? he says. ?The priority for a delivery van would be to improve fully laden performance during pull away or hill climbing. And both will benefit from the significant improvement in range.?

Though more complex than a single-speed transmission, the cost and weight of the multi-speed system compares favorably to a conventional gearbox because it requires no clutch or synchronizers. This inherent simplicity makes the technology attractive to EV producers. ?It?s possible that the additional cost could be more than recovered through reductions in the amount of batteries needed,? Taylor points out.

?Our two-speed transmission demonstrated the benefits of EVs moving beyond a single speed,? ads Vocis managing director Mike Everitt. ?We are now extending those gains by using multiple ratios to make EVs more competitive in a variety of applications. This gives us single, twin and multispeed EV transmissions, all of which are already in running vehicles.?