Not everyone is fortunate enough to be able to attend the International Motorcycle Exhibition in Milan, Italy, which is officially known as the Esposizione Internazionale Ciclo e Motociclo e Accessori, or more simply referred to as the EICMA Show. This year was the 71st edition of the EICMA Show, which is the biggest motorcycle show in the world, with the most new-bike unveilings and the largest floor plan. More than 1,000 manufacturers of riding machines, gear and accessories from 35 different countries exhibit their wares at the legendary show.

Ty van Hooydonk, director of Discover Today?s Motorcycling and a senior advanced instructor for the Motorcycle Safety Federation attended this year?s EICMA Show and was gracious enough to serve as our correspondent and to supply us with an early look at some of the more significant examples of the amazing crop of new bikes making their debut at the gigantic Fiera Milano convention center.

Here is a glimpse ahead at what will be available to ride in the 2014 model year. Keep in mind however, that not all of these machines, and certainly not the concept models, have been announced for the U.S. market, and prices have yet to be set for many of the machines.
We?ve selected to provide a brief preview of 32 bikes here that were displayed at the EICMA Show in Milan. ?We will break them up into two groups to be presented in two separate columns. The first group of 16 are featured in today?s column, with the second remaining group to be posted on Tuesday, December 6th. 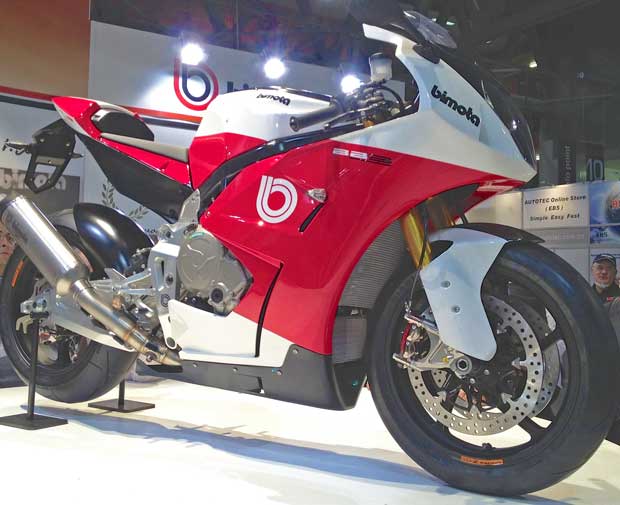 Small, Italian, super-exotic bike builder Bimota has a long history of taking the best powerplants from major manufacturers and wrapping them in lighter chassis with sleek bodywork. The BB3 unveiled at EICMA is the latest and this one utilizes BMW?s near-200-horsepower S 1000 RR inline four, shoehorning it into a Bimota-traditional steel trellis frame. Also more traditional is the bodywork that veers away from the complex, robo-look seen on many of today?s sport bikes, returning to the simpler, cleaner designs of 1990s repli-racers. Classic, too, for Bimota, is the low advertised weight, thanks to both engineering and premium materials: under 400 pounds dry. 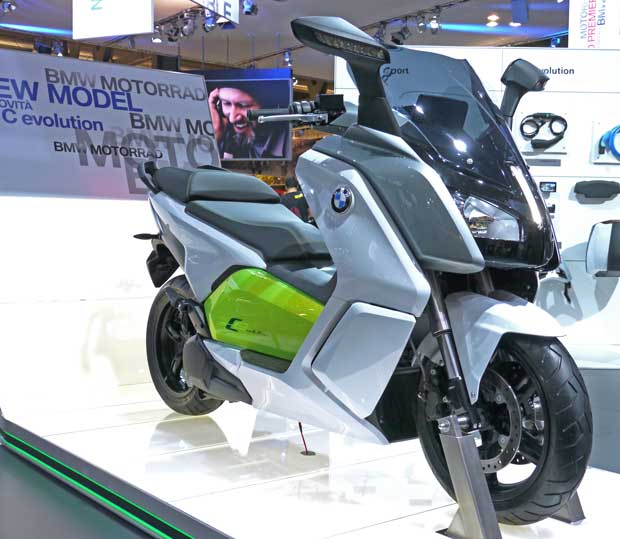 BMW is getting into the ever more crowded electric two-wheel market and presented this ?first near-production prototype? as a new model. The company states that its C evolution scooter delivers a continuous output of 11 kW with a peak of 35 kW, providing a top speed of 74 mph, with strong acceleration, and a range of just over 60 miles. ABS aids in bringing it to a halt, with an automatic energy recovery system that is capable of extending range by 10 to 20 percent. BMW also stated that charging time (with an integrated charging system, either at a regular household socket or a charging station) when the battery is completely spent, is less than three hours.

BMW celebrates its 90th anniversary with the R Nine T, honoring iconic traditions, while serving up retro cool. The 1,170cc powerplant is an air-/oil-cooled boxer twin, like so many past BMWs. There?s a new tube-steel chassis, with traditional, but top-quality telescopic forks, and shaft drive, with torque reactions tamed by a Paralevel swing arm. The R Nine T is designed to be customized and accessorized, with an easily removable subframe and lighting. All the mechanical components are exposed, with clear intent, and may easily be replaced or modified. This model will be sold in the U.S. and BMW dealerships are already taking deposits. 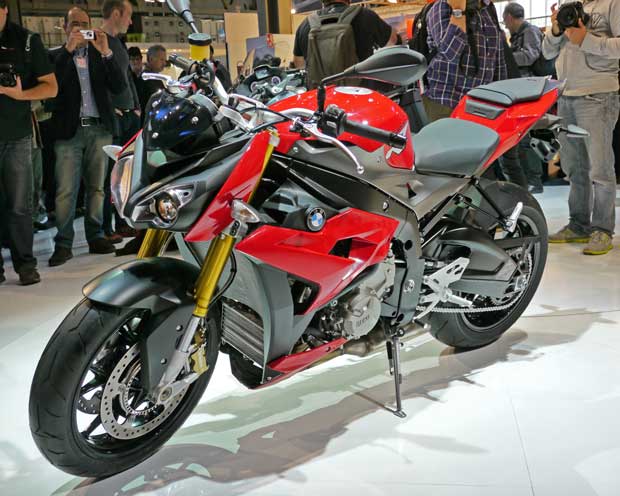 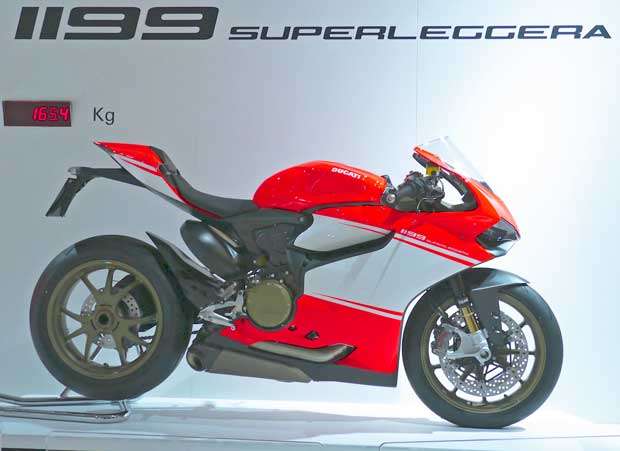 The ultimate version of Ducati?s Panigale superbike displayed a digital read-out on its EICMA show platform, with 165.4 Kg glowing in red. That?s 365 pounds (no fuel), propelled by 200-plus Italian V-twin horsepower, and Ducati boss, Claudio Domenicali said, of pairing weight down everywhere: ?Even the tiny radiator cap went on a diet.? The big weight savings come from items such as the cast magnesium box structure serving as the front section of the frame and air-box, which used to be aluminum. Wheels are now magnesium forgings by Marchesini. Almost five pounds were shaved through the use of a new lithium ion battery. A titanium coil spring wraps around the high quality ?hlins TTX36 rear shock. And, the bike is dripping with carbon fiber. The price? Estimated at around $65,000, for a lucky few, since only 500 are to be produced. 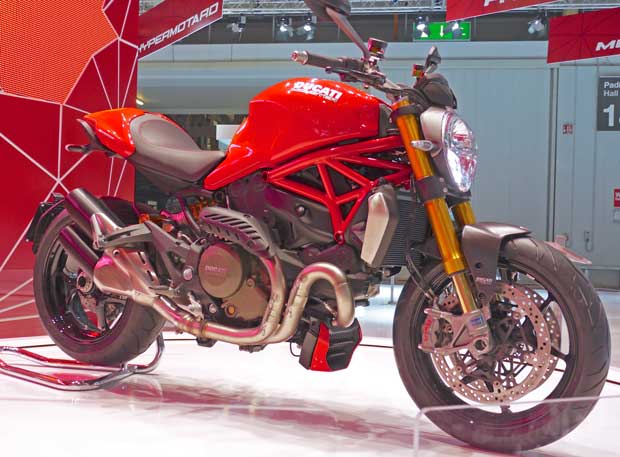 Ducati also showcased an all-new Monster – the largest yet, and the latest in a series of naked sporting bikes that date back to 1993. The 1200 S is powered by the firm?s big liquid-cooled Testastretta V-twin powerplant that delivers a claimed 145 horsepower along with a huge 92 foot-pounds of torque. Multiple power modes and traction-control are standard parts of the new package. The tube-steel trellis frame is also new to go with that new, stressed-member engine. Premium ?hlins suspension is front and rear with Brembo Monobloc front calipers handling the major stopping chores. The S model has an MSRP of $15,995 , while the lower-spec, slightly less powerful standard model comes starts at $13,495. 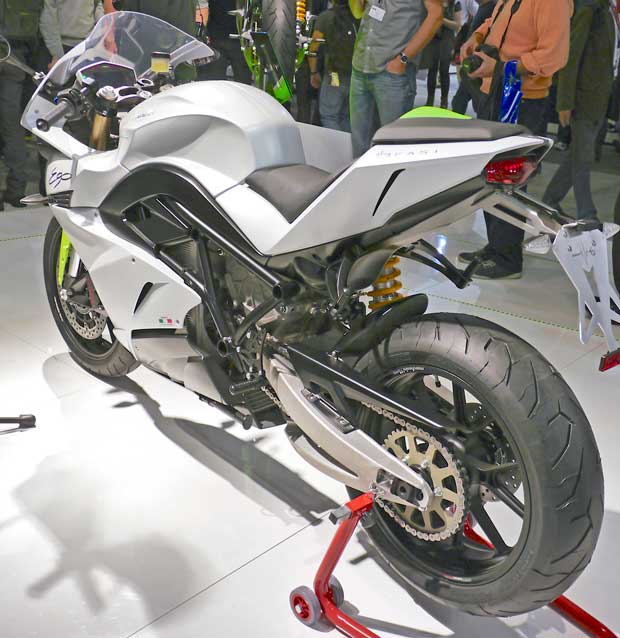 The EGO is a new electric superbike from the CRP group, which states that it has been supplying the world?s highest performance automotive firms with engineering, rapid prototyping and advanced materials for more than 40 years. Appropriately, a label on the show bike presented at EICMA indicated that it was proudly produced in Modena, Italy, birthplace of Ferrari, and not far from the Lamborghini factory. The builders claim that the EGO has a whopping 195 Newton meters of torque that will propel it from zero to 62 mph in a scant 3.7 seconds, with it?s speed-limited to 150 mph. Not a silent-running electric, the makers say that the EGO has a ?roar of power that will astonish,? thanks to straight-cut final drive gears, similar to the drive train of a Formula 1 car. Perhaps as exciting as the performance claims, is the news that the group is working on a solution that will enable buyers to rent or lease the battery. For a monthly fee, a purchaser can periodically swap for a brand-new power cell. Representatives said that the first EGO will become available at the beginning of 2015. 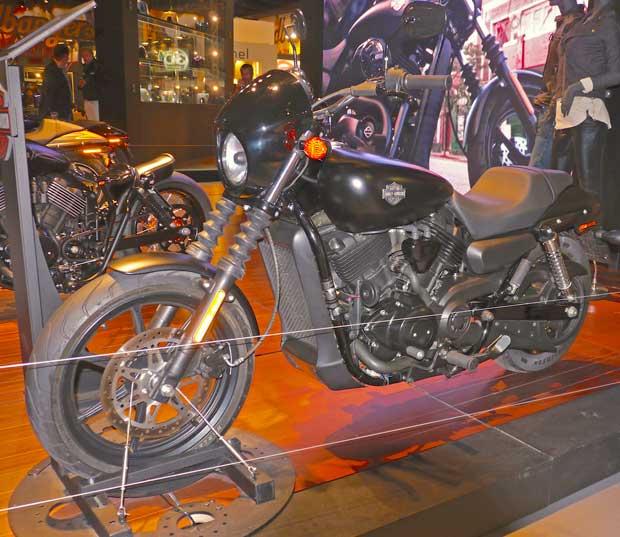 The Motor Company unveiled its first all-new platform in more than a decade featured in the Street 500 and Street 750, which target a younger market and are differentiated only by badging, a different engine bore, with $6,700 and $7,500 starting prices respectively. Unusually for H-D, both are 60-degree V-twins with four-valve heads, and a large radiator behind the front wheel that signals the liquid-cooling. A tiny headlight fairing helps deflect some wind at speed. Both versions have balance shafts to tame vibration and six-speed gearboxes for greater cruising flexibility. More familiar is the belt final drive common to many of the Milwaukee machines, but the Harley 500s and 750s will be assembled in Kansas City. 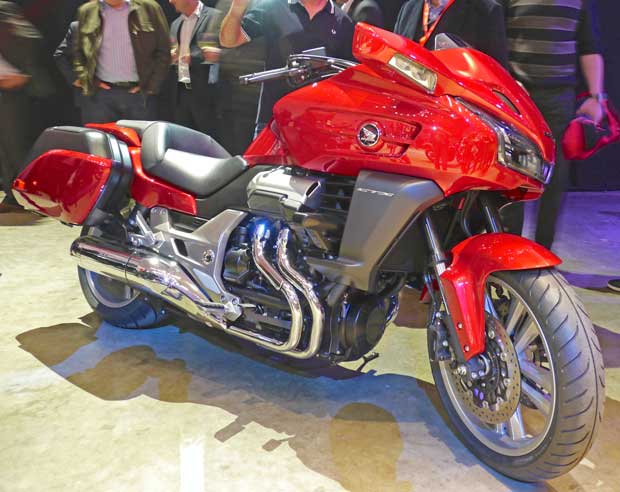 A heavily revised ST1300, V-four engine powers Honda?s newest and biggest CTX sport-touring model. Aiming at a higher-performance bagger-style bike, the CTX features traction control and ABS to go with its iPod/MP3/smartphone-compatible stereo and Bluetooth connection. While the bike weighs a claimed 745 curb pounds, the fuel tank is positioned beneath the seat to keep that weight low, which is a low 29 inches off the ground. Honda will sell this in the U.S. 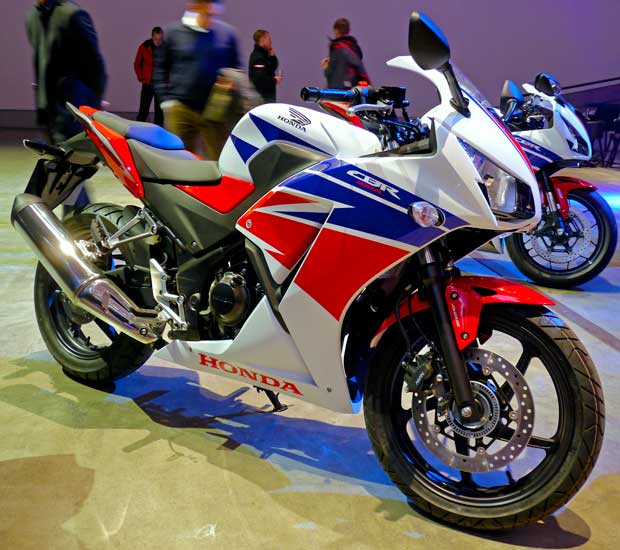 To help it compete with Kawasaki?s Ninja 300, Honda has given its CBR250R a longer stroke resulting in a 286cc single-cylinder engine. New, sportier styling and standard ABS serve as additional plusses. The earlier 250 borrowed its design theme from the flagship VFR1200F, while the new 300 looks more like part of the CBR sport racing family. With the one-cylinder engine, Honda is offers buyers a narrower, lighter alternative in the small-sport category. 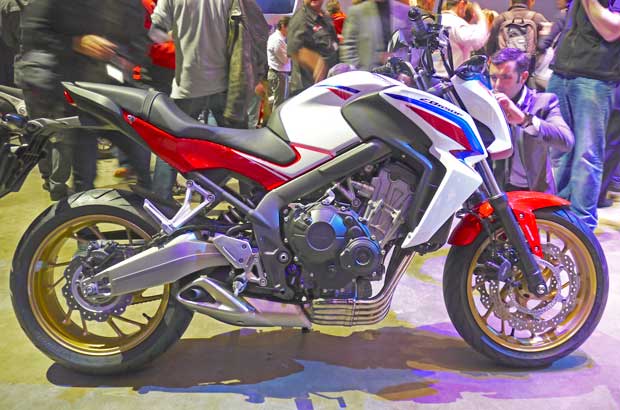 In Europe, Honda is trading in its long-running Hornet middleweight for this all-new naked street-fighter 650, along with a sister model featuring a full fairing called the CBR650F. Both feature a quartet of wavy exhaust pipes that recall CBs of four decades ago, while the up-to-date inline engine is tuned for high torque, rater than horsepower. It comes with the classic double-overhead-cam, liquid-cooled, 16-valve format, with cylinders canted forward 30 degrees for improved weight distribution, and it?s positioned in a steel, twin-spar frame. The muffler tucks under the engine, while the die-cast aluminum swing arm arches upward making room for the exhaust. 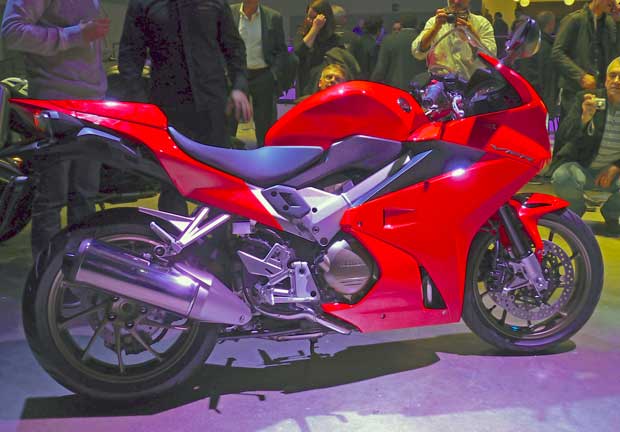 The long-running VRF800 receives its first refresh since 2002, with new bodywork, suspension, wheels and brakes, that help to shave off a roughly 22 pounds. The V-four?s VTEC engine was previously known for a pronounced midrange hiccup as it engaged two additional valves per cylinder, but Honda promises that ?the transition is now seamless.? The revised 782cc powerplant now includes traction control, with quicker shifting available through an accessory, bolt-on, plug-in, shift-assist that permits going up through the gears without touching the clutch. The bike comes standard, with ABS, LED lights, an adjustable-height seat, self-canceling turn-signals, and heated grips. The VFR has long been a favorite of sport-touring enthusiasts and the available top box and saddlebags should help to keep with that tradition. 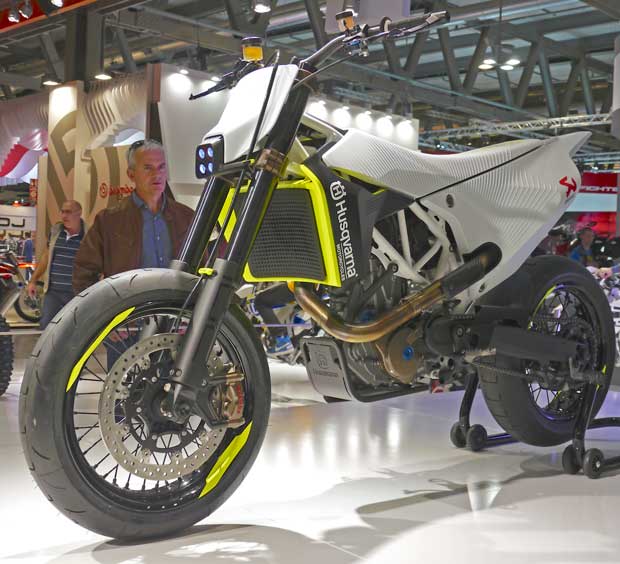 The EIMCA Show in Milan is also a showcase for concept bikes, and Husqvarna?s 701 supermoto machine was on hand to provide a look at the company?s design direction, now part of the KTM corporate family. The 701 has one, huge 690cc cylinder, wrapped in a Chromoly steel trellis frame and top-shelf chassis components. 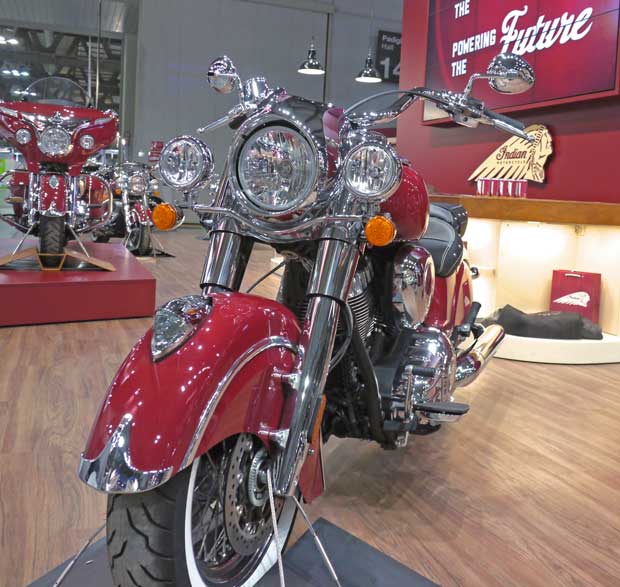 The newly revived Indian motorcycle company, made its first showing in the European market with its EICMA Show display of three models powered by the brand-new Thunder Stroke 111 engine – an air-cooled, 49-degree V-twin, with very traditional pushrod valve actuation and down-firing exhaust. More modern elements include ABS, keyless ignition, and LED lighting. The Chief Classic is the quintessential cruising machine; the Chief Vintage is a bagger with a quick-release windshield; while the Chieftain represents a nearly full-on tourer with a powered windshield. The cruiser market in America continues to be strong, and Indian?s new owners, Minnesota?s Polaris Industries (also builders of Victory motorcycles), are counting on an enthusiasm for U.S.-built, classically styled machines across the Atlantic, as well. Prices start at $18,999 for the Classic and rise to a starting price of $22,999 for the Chieftain. 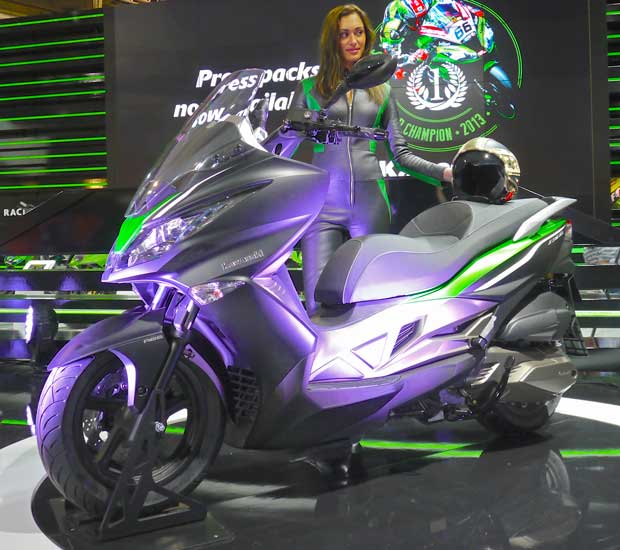 For a company noted for building New York City subway cars, it?s surprising that Kawasaki has never offered a scooter in the European market. The new J300 now changes that. Under its edgy styling, a 299cc, liquid-cooled, fuel-injected, overhead-cam single motor, with a CVT automatic transmission, provides motive force for the machine with a claimed weight of 421-pounds. ABS is an available option for the scooter. 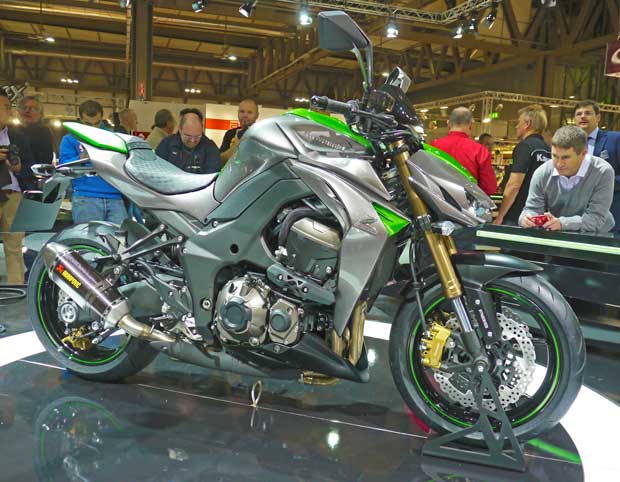 While it may look initially like a concept bike, this latest version of Kawasaki?s naked, one-liter four (hearkening back to the 1973 Z-1) will be sold in the U.S. starting at $11,999. Kawasaki credits its ?sugomi? design with giveing the bike a crouched, aggressive look. New hardware includes new cams, new air filter, airbox and crankcase vents for boosted power, and monobloc radial-mounted front brake calipers for boosted braking, plus a taller sixth gear for more relaxed highway cruising. The bike in the photo has an accessory Akrapovic muffler. It will come with ABS here in the U.S.

Look for another 16 previews from the EIMCA Show here on Friday, December 6th 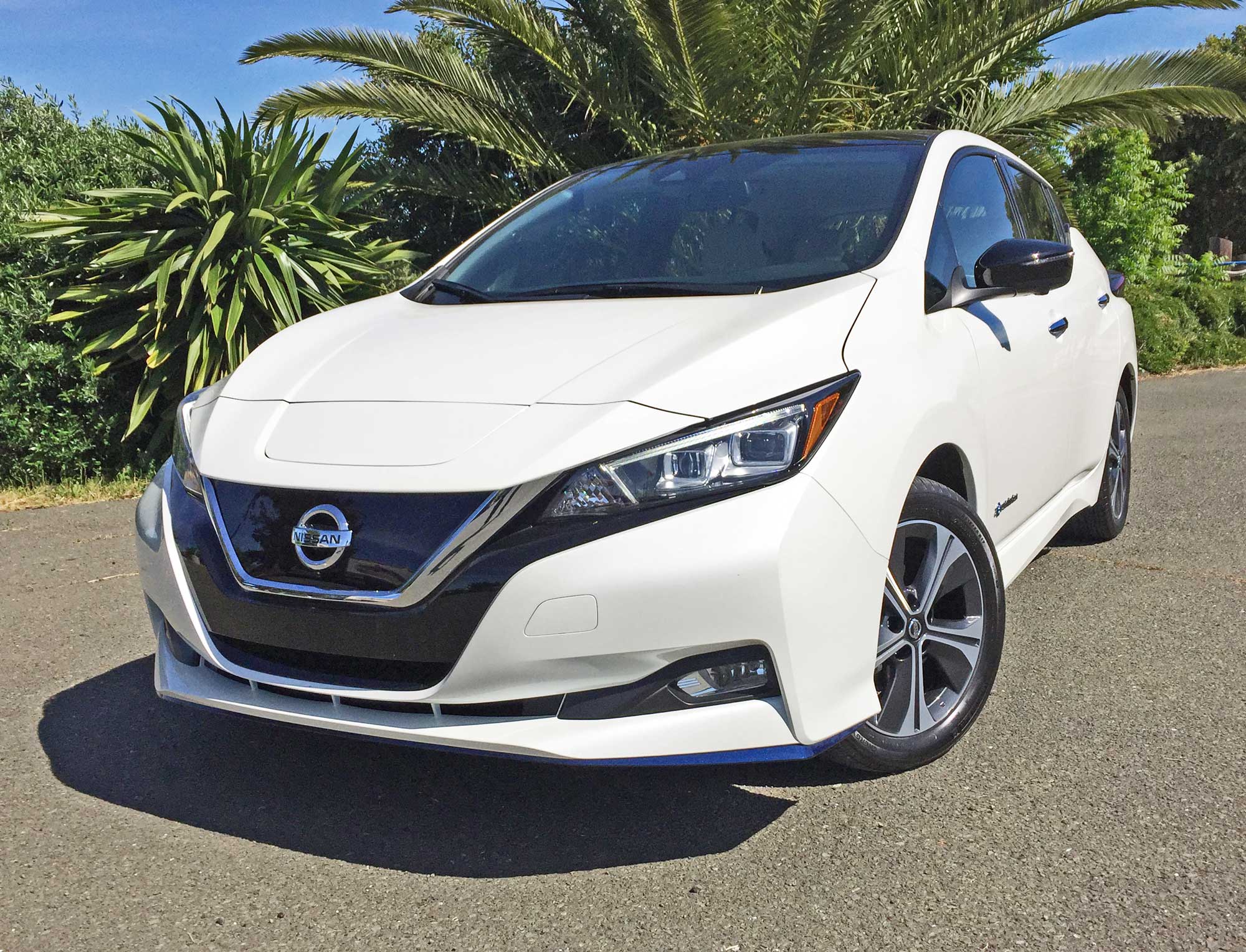