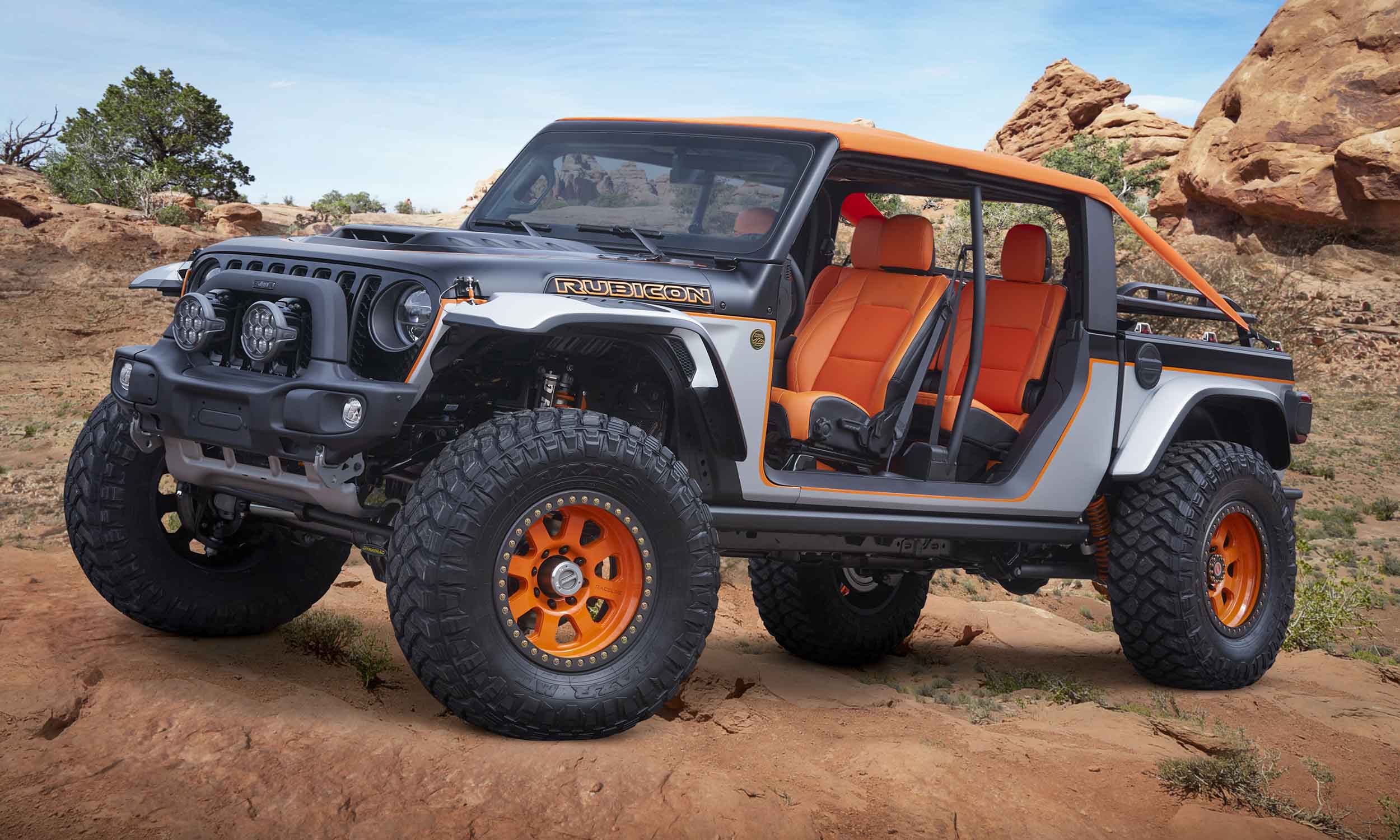 Fifty Years of Easter Jeep Safari
For more than a half century, Jeep enthusiasts have been gathering in Moab, Utah, for the annual Easter Jeep Safari off-roading event. What started as a one-day trail ride has evolved into a nine-day extravaganza hosted by Moab’s Red Rock 4-Wheelers four-wheel-drive club. Part of the tradition at the safari is Jeep’s ongoing commitment to the event; each year the rugged off-road brand brings a range of fully functional concept vehicles to join the fun. At the 2022 Easter Jeep Safari from April 8 through 17, the iconic American off-road brand introduces seven concepts ready to hit the trail. In addition, Jeep will be displaying three special SEMA concepts that premiered in Las Vegas last fall. 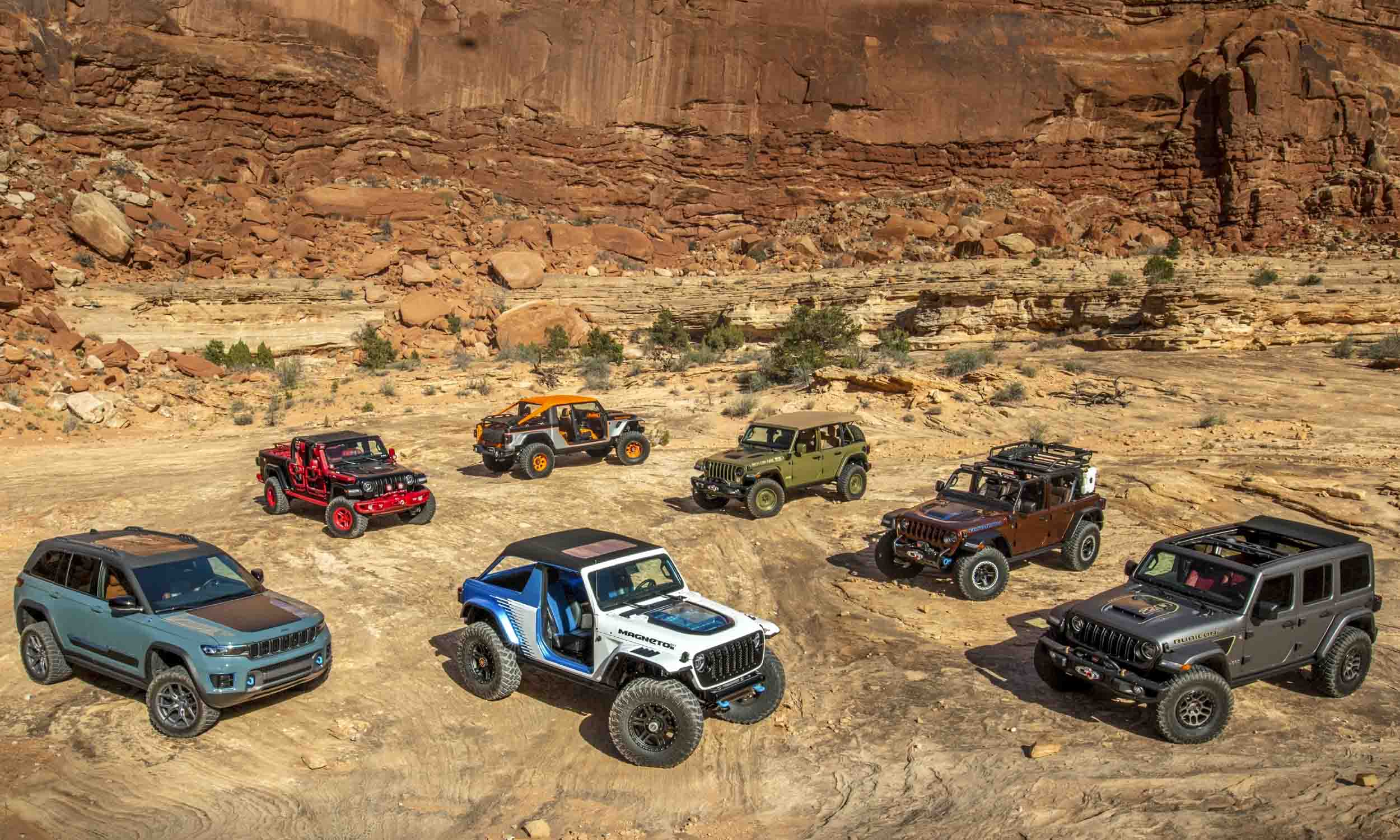 Pushing the Limits
“Easter Jeep Safari is the perfect opportunity for the Jeep brand to push the limits of four-wheel-drive development and, most importantly, to stay connected with our customers,” said Senior Vice President and Head of Jeep Brand North America Jim Morrison. “Moab is a rite of passage for many Jeep owners, and to own a Jeep is to truly understand the lifestyle — it’s what the Jeep brand is all about,” Morrison noted. Let’s dive in and take a look at the cool Jeep concepts attending the 2022 Easter Jeep Safari in Moab. 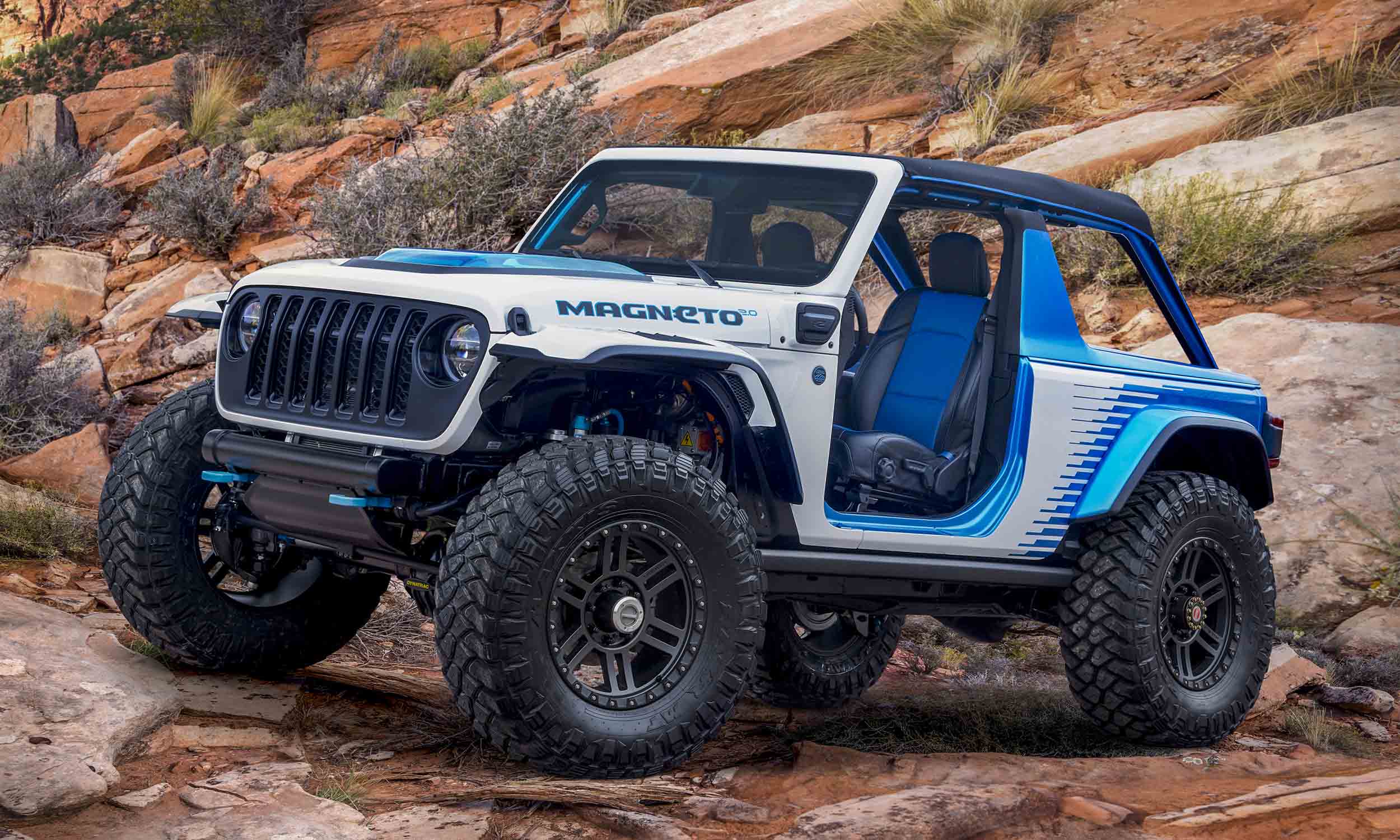 Jeep Wrangler Magneto 2.0 Concept
At last year’s event, Jeep introduced the all-electric Wrangler Magneto with the promise to continue iterating on the concept and bring it back. True to its promise, the Magneto 2.0 Concept will be silently attacking the terrain at this year’s Easter Jeep Safari. The Wrangler Magneto 2.0 gets a custom-built axial flux electric motor delivering 625 horsepower and an astounding 850 lb-ft of torque. Power gets directed to all four wheels via a 6-speed manual transmission from a Hellcat to deal with all that torque. Four lithium-ion battery packs are distributed throughout the chassis for proper weight balance. This new electric powertrain can deliver peak power for up to 10 seconds to showcase another cool trick of the Magneto — this electrifying Jeep it can reach 60 mph in about 2 seconds. 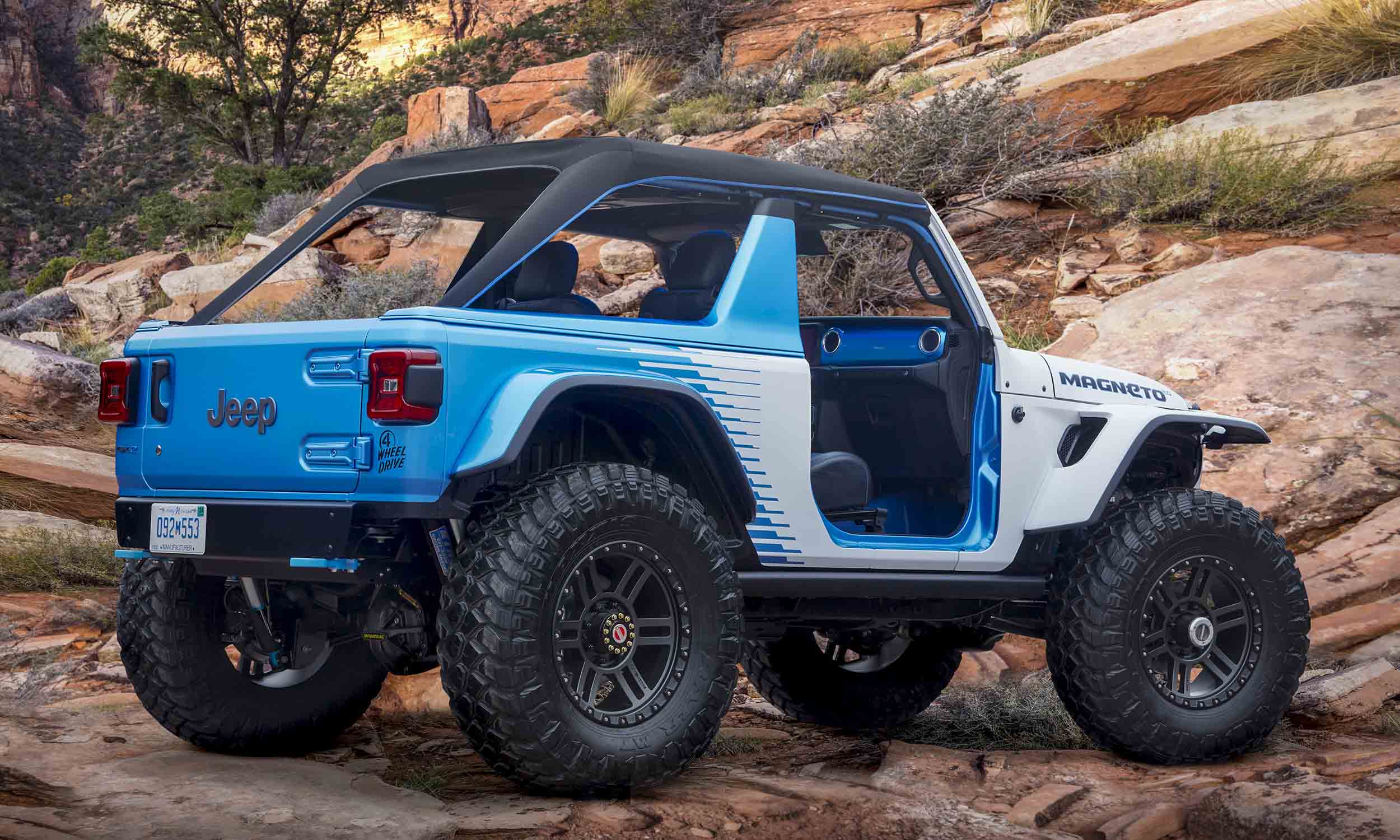 Jeep Wrangler Magneto 2.0 Concept
To make proper use of all that power on the trail, engineers extended the 2-door Magento 2.0’s wheelbase by 12 inches. It features a 3-inch lift kit to accommodate massive 40-inch off-road tires. The chassis setup includes a Dynatrac 60 Pro-Rock front axle and 80 Pro-Rock rear axle. The Magneto 2.0 also has a custom driveshaft and off-road suspension. Custom lightweight bumpers and carbon-fiber wheel flares keep weight to a minimum. The Magneto 2.0 also features one-pedal driving for ultimate control when crawling over rocks or other obstacles. Painted in Surf Blue with a custom bikini top, the Magneto 2.0 will certainly be an attention-getter in Moab. 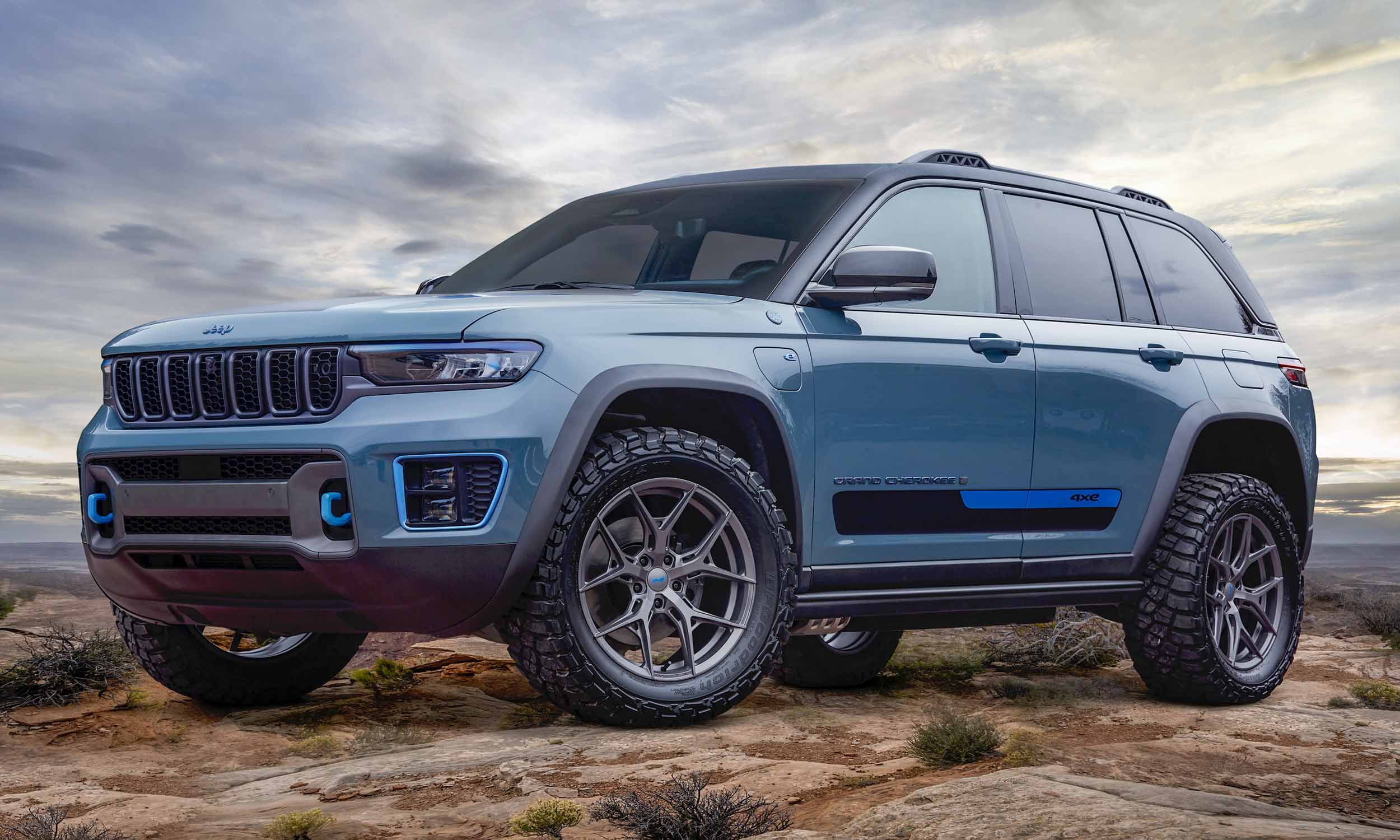 Jeep Grand Cherokee Trailhawk PHEV Concept
Since Jeep is coming to market with the all-new Grand Cherokee 4xe, it seems fitting to use the Easter Jeep Safari to showcase what this plug-in hybrid can do. The production Trailhawk 4xe boasts 56 MPGe and 25 miles of electric-only range and is fully equipped from the factory to handle the toughest terrain. Features include a sway-bar disconnect for improved articulation, as well as Jeep’s Quadra-Lift air suspension system. Enhanced for Moab, the concept also has 33-inch BFG mud-terrain tires fitted to 20-inch Neutral Gray metallic matte wheels as well as widened wheel wells to handle the big rubber. 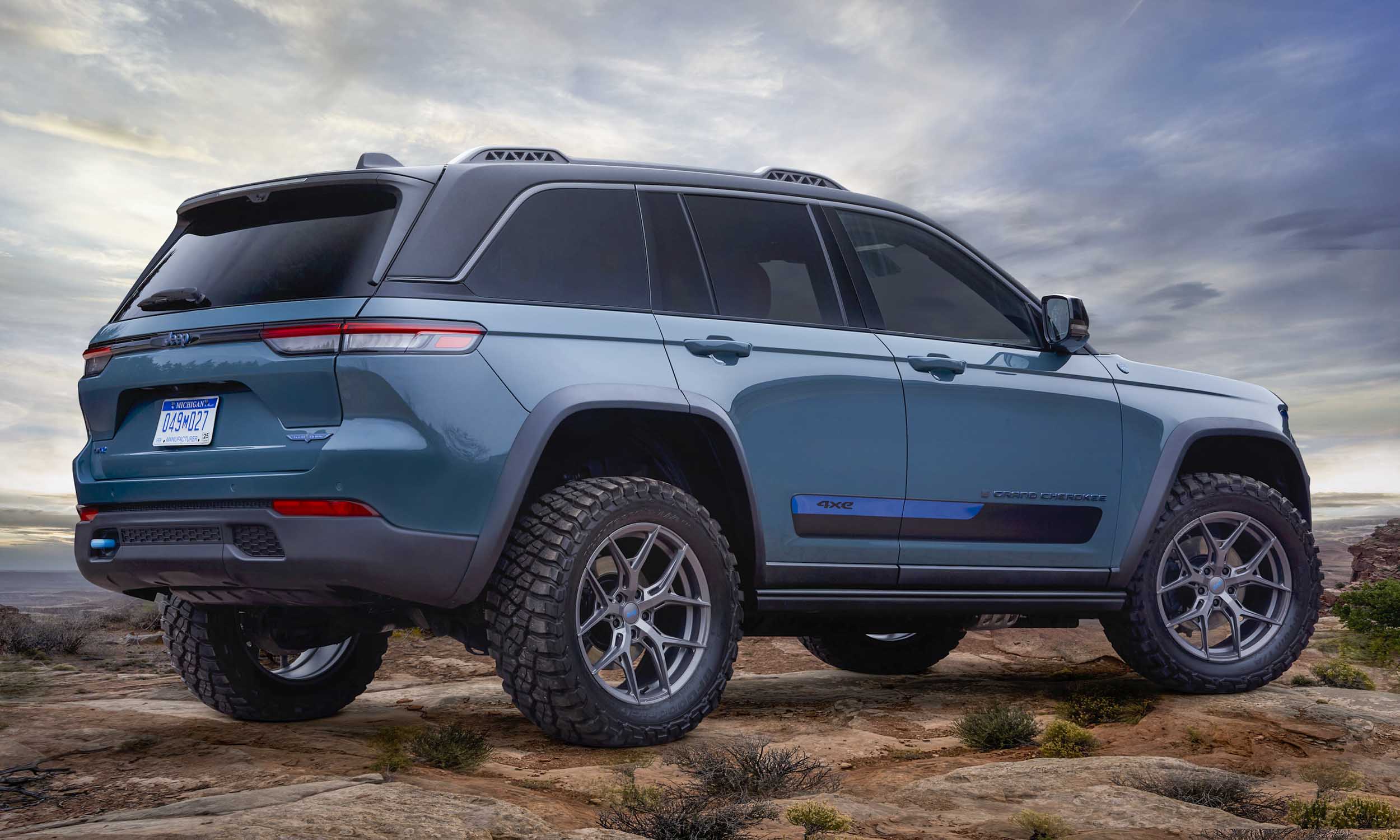 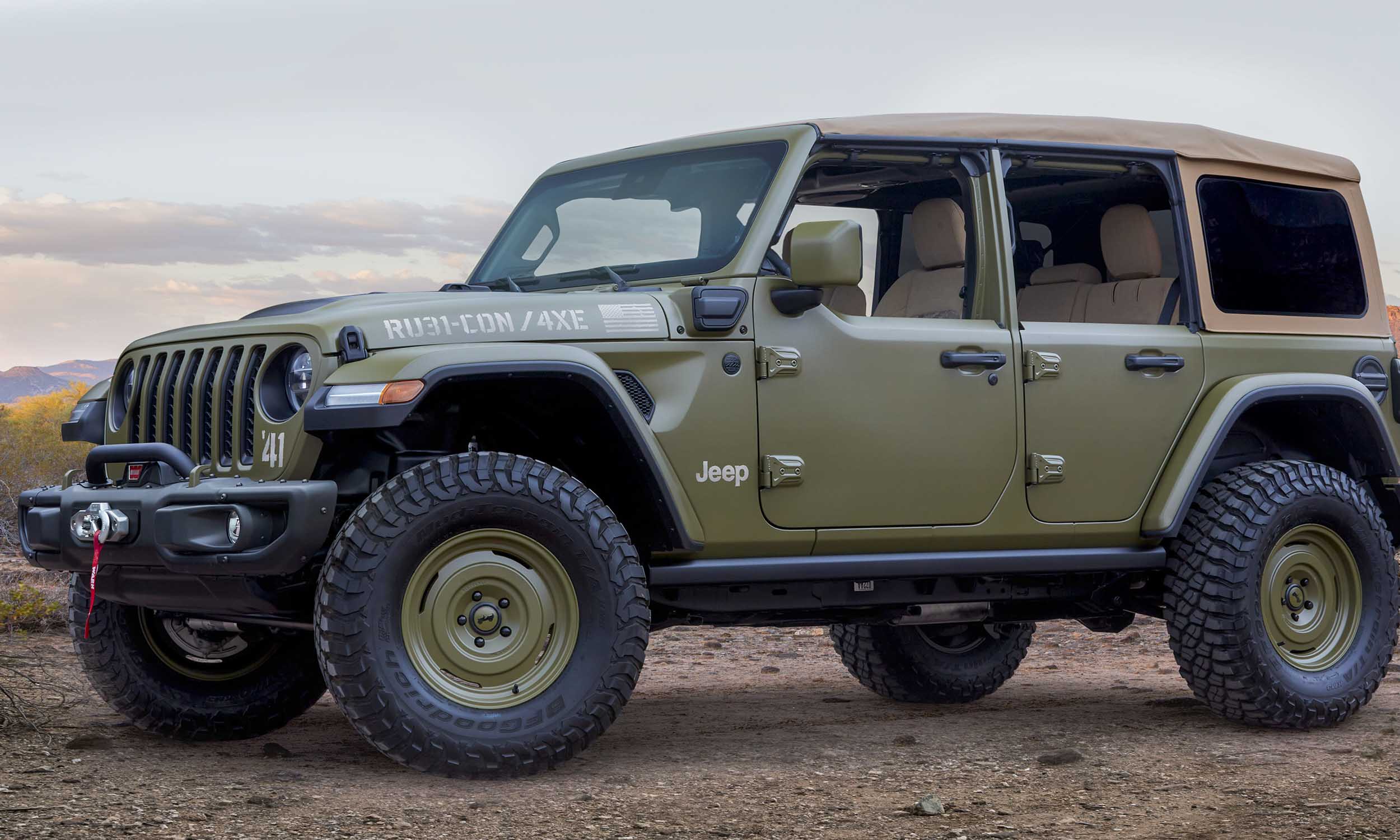 Jeep ’41 Concept
Jeep displays “Since 1941” as a badge of honor on its vehicles, promoting the history of this legendary brand. As it does at every Easter Safari, Jeep brings a concept vehicle that showcases a vehicle from that colorful past. This year’s event includes a Wrangler concept that highlights the company’s military roots — specifically the Willys MB built specifically for the U.S. Army. The ’41 Concept takes that retro styling and ironically puts it on the most advanced Wrangler ever offered, the Rubicon 4xe PHEV. With an electric motor and a 2.0-liter turbocharged engine, the Wrangler 4xe delivers up to 49 MPGe and 21 miles of electric-only cruising. 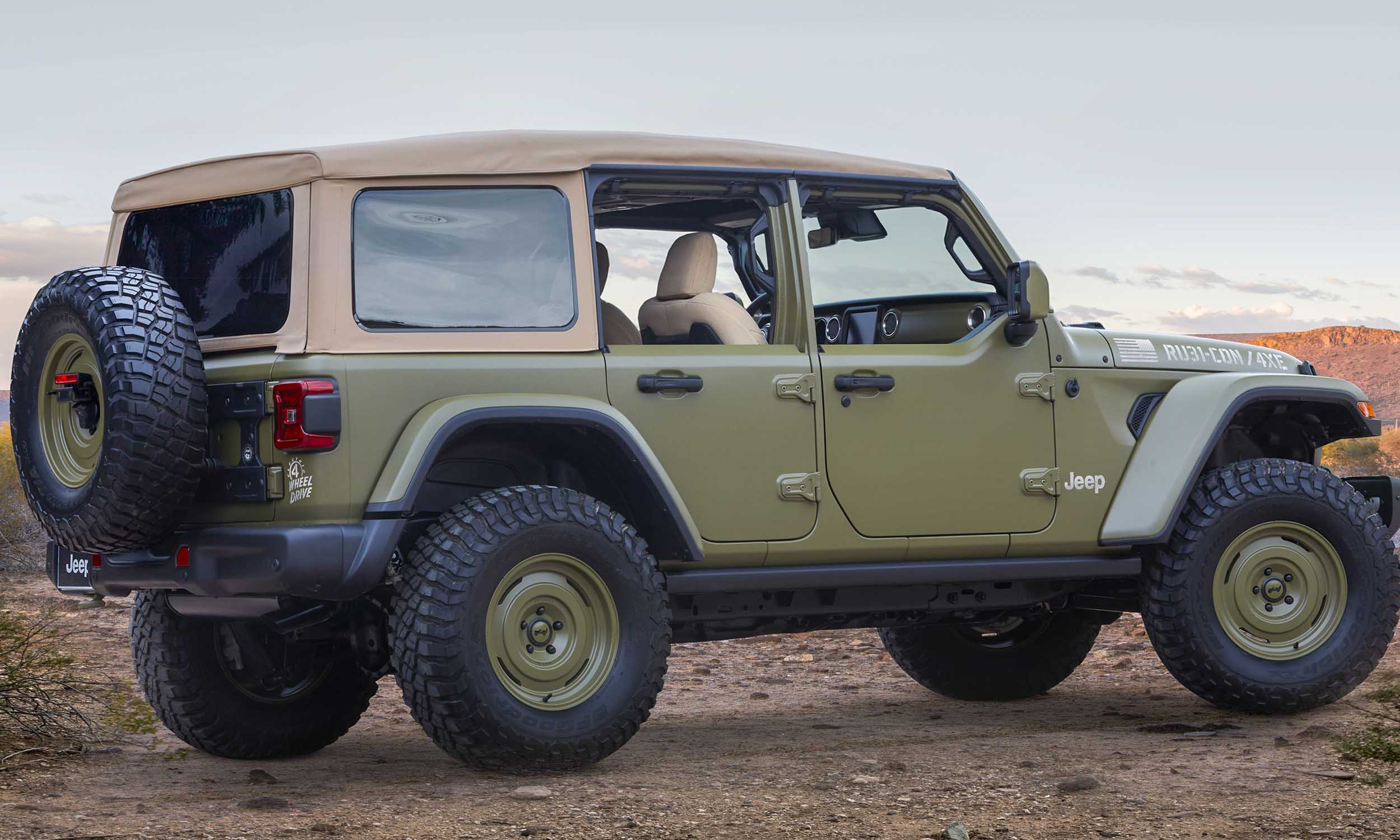 Jeep ’41 Concept
This Wrangler 4xe has been transformed with an olive D.R.A.B. ’41 matte green finish. Adding to the retro styling are black powder-coated steel bumpers, a tan soft-top, Jeep Performance Parts half doors and 17-inch Fifteen52 wheels that have the appearance of steel wheels. Interior goodies include a retro shifter, as well as canvas-covered seats with camo inserts. The D.R.A.B. ’41 matte green color continues the inside, trimming the instrument panel and Rhino-lined protective floor. The ’41 Concept delivers proper Jeep capability with a JPP 2-inch lift kit and 35-inch mud-terrain tires.

Jeep Rubicon 20th Anniversary Concept
Twenty years ago an enthusiastic group of Jeep engineers began work on a side project to create a Wrangler that could take on the toughest terrain, honoring the vehicles that Jeep enthusiasts had been creating on their own. The creation was called the Rubicon (after the trail), and had a long list of special accessories including front and rear lockers, disconnecting sway bars and oversized tires that had never been offered from the factory before. To celebrate this momentous anniversary, Jeep built the Rubicon 20th Anniversary Concept based on the most powerful production Wrangler ever: the 472-horsepower Wrangler Rubicon 392. 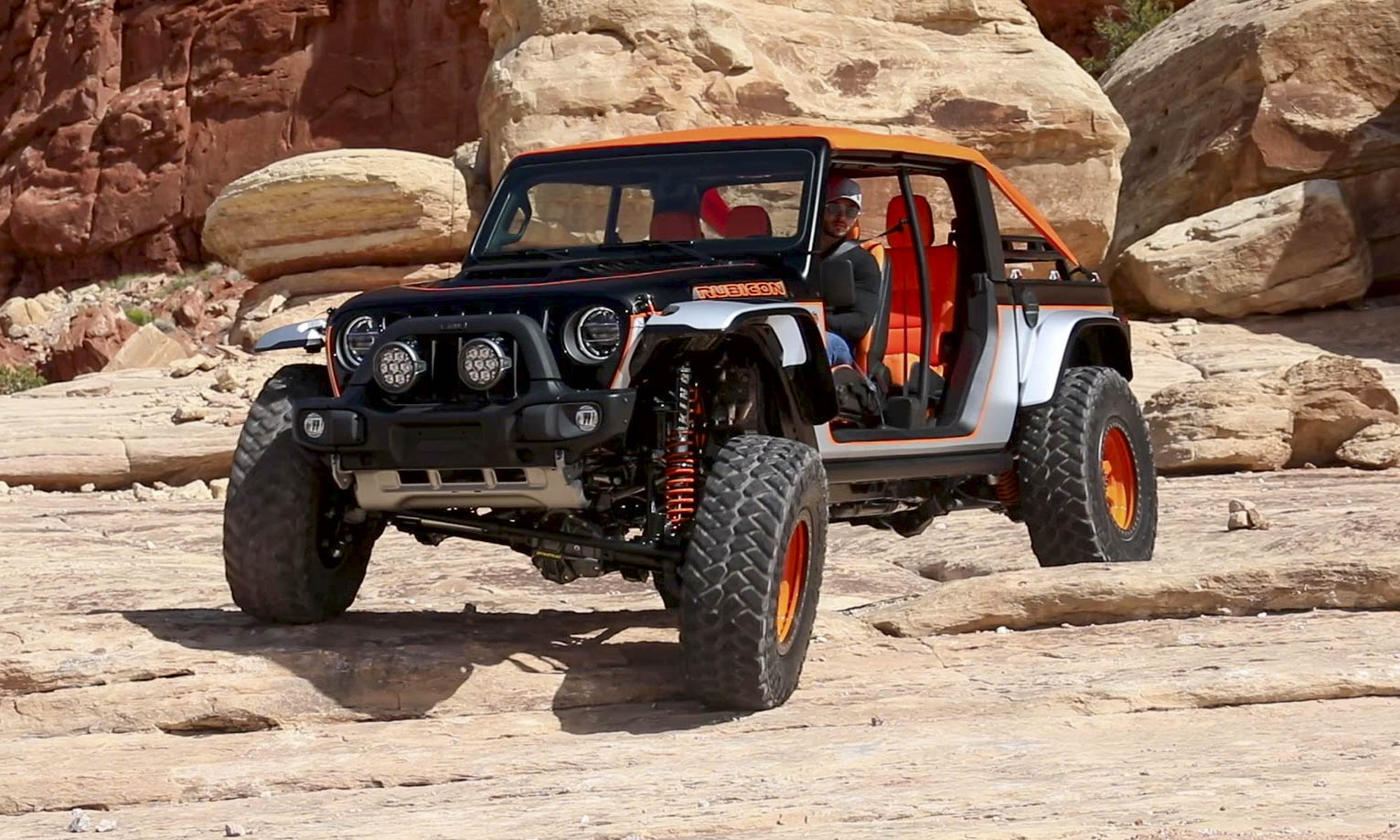 Jeep Bob Concept
No one named “Bob” is associated with this concept. A common practice among extreme off-roaders is to “bob” or cut off the long overhangs of a pickup truck to make it more agile on the trail. That’s exactly what Jeep did with this Gladiator; approximately 12 inches of bed h bobbed. The bed’s not all that’s been bobbed from this custom Gladiator; the doors and B-pillars have been removed for a permanent open-air experience. The hardtop has been perforated and covered with canvas to provide some shelter from the elements when needed. The Bob Concept stands out with both gloss and matte multifinish exterior paint. With no doors obstructing views inside, the interior’s custom orange seats and trim both complement and complete the exterior appearance. 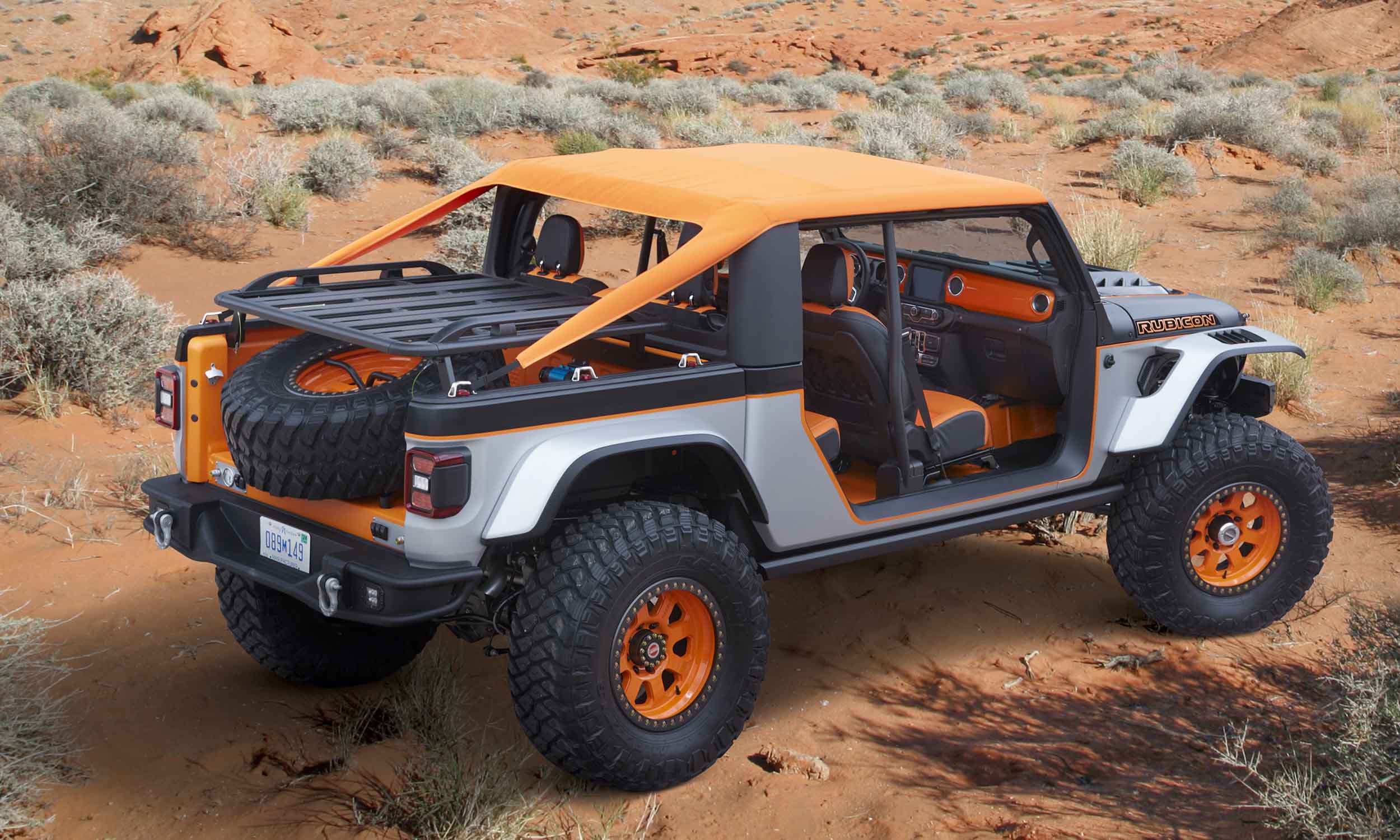 Jeep Bob Concept
Powering the Bob concept is Jeep’s turbocharged Eco-Diesel V6 engine teamed with an 8-speed automatic transmission set up for low-rpm shifts. The Mopar cold-air intake improves both torque and fuel economy. Like the rest of these special concept vehicles, the Bob Concept is more than ready to take on Moab with a 3-inch lift kit, custom off-road suspension, Dynatrac pro-Rock 60 axles and huge 40-inch tires fitted to 20-inch beadlock wheels. 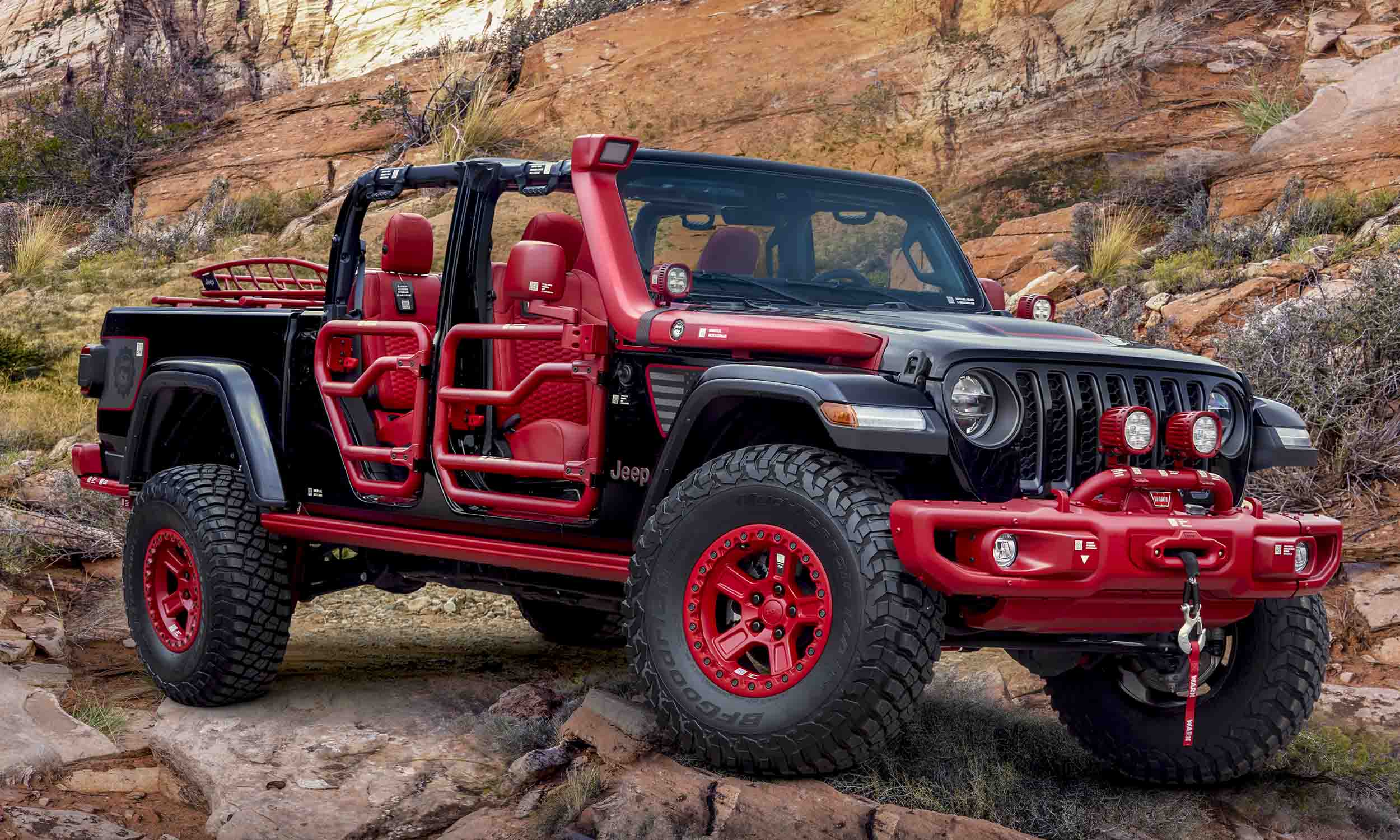 Jeep D-Coder Concept by Jeep Performance Parts
Jeep owners love to customize their vehicles, and to aid in that endeavor Mopar offers a catalog of more than 500 accessories, including more than 200 Jeep Performance Parts. What better way to showcase these accessories than to create a rolling catalog —the D-Coder Concept. Every accessory painted in red on this custom Jeep Gladiator features a scannable QR code that links to the Mopar eStore, providing the part number, price and ability to order on the spot. A brilliant move of off-road marketing. This Gladiator features 35 special parts including a Rubicon three-piece modular bumper, LED off-road lights, 17-inch five-spoke beadlock wheels, a JPP snorkel and a Mopar cat-back dual-exhaust system. 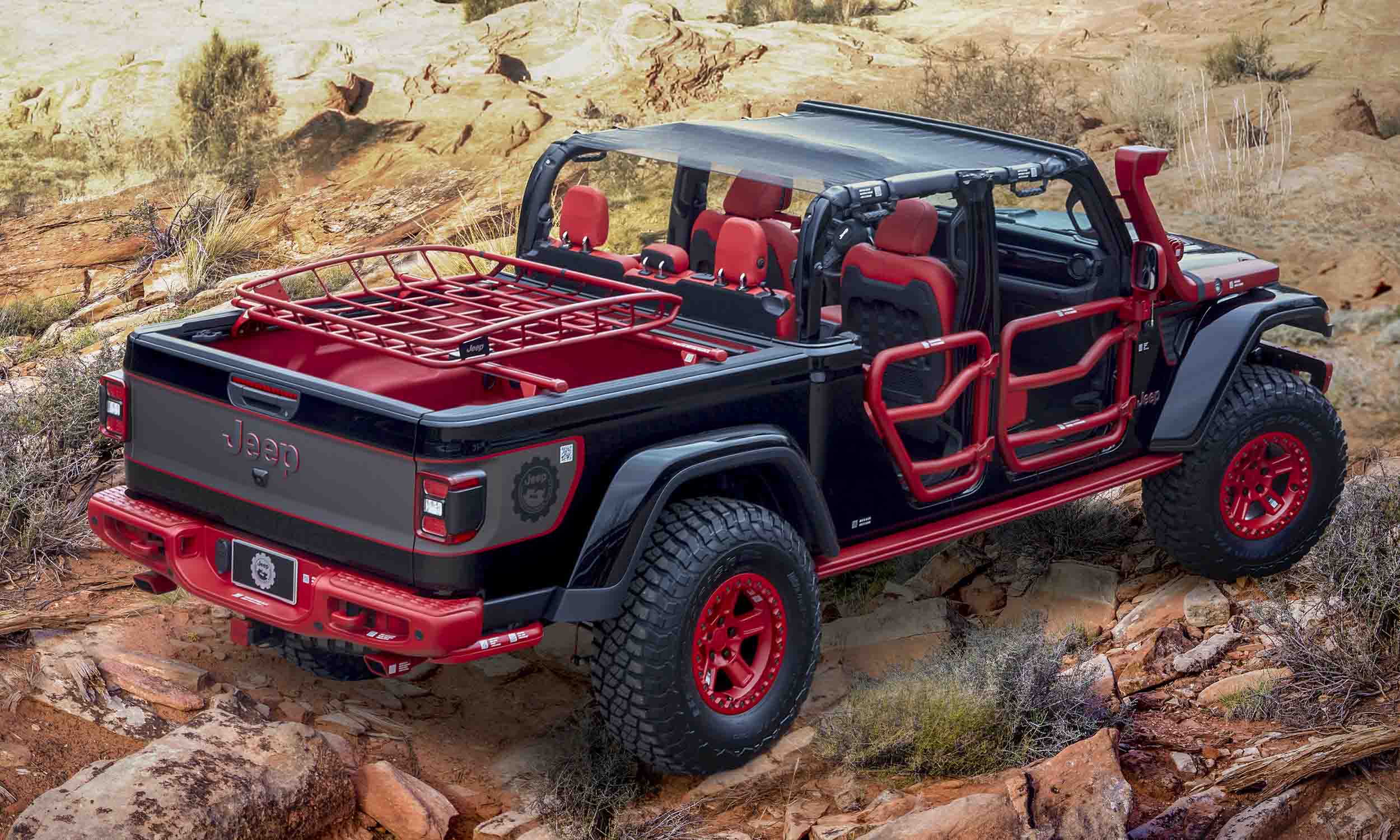 Jeep D-Coder Concept by Jeep Performance Parts
“Teaming up with the Jeep brand, there is no better place than the annual Easter Jeep Safari to show off our latest production and custom innovations to true off-road enthusiasts,” said Mark Bosanac, North America vice president of Mopar Service, Parts & Customer Care. “Unlike any other aftermarket offerings, our factory-tested and factory-backed Jeep Performance Parts are specifically designed and engineered to face the toughest trails in the world,” Bosanac noted prior to this year’s event. 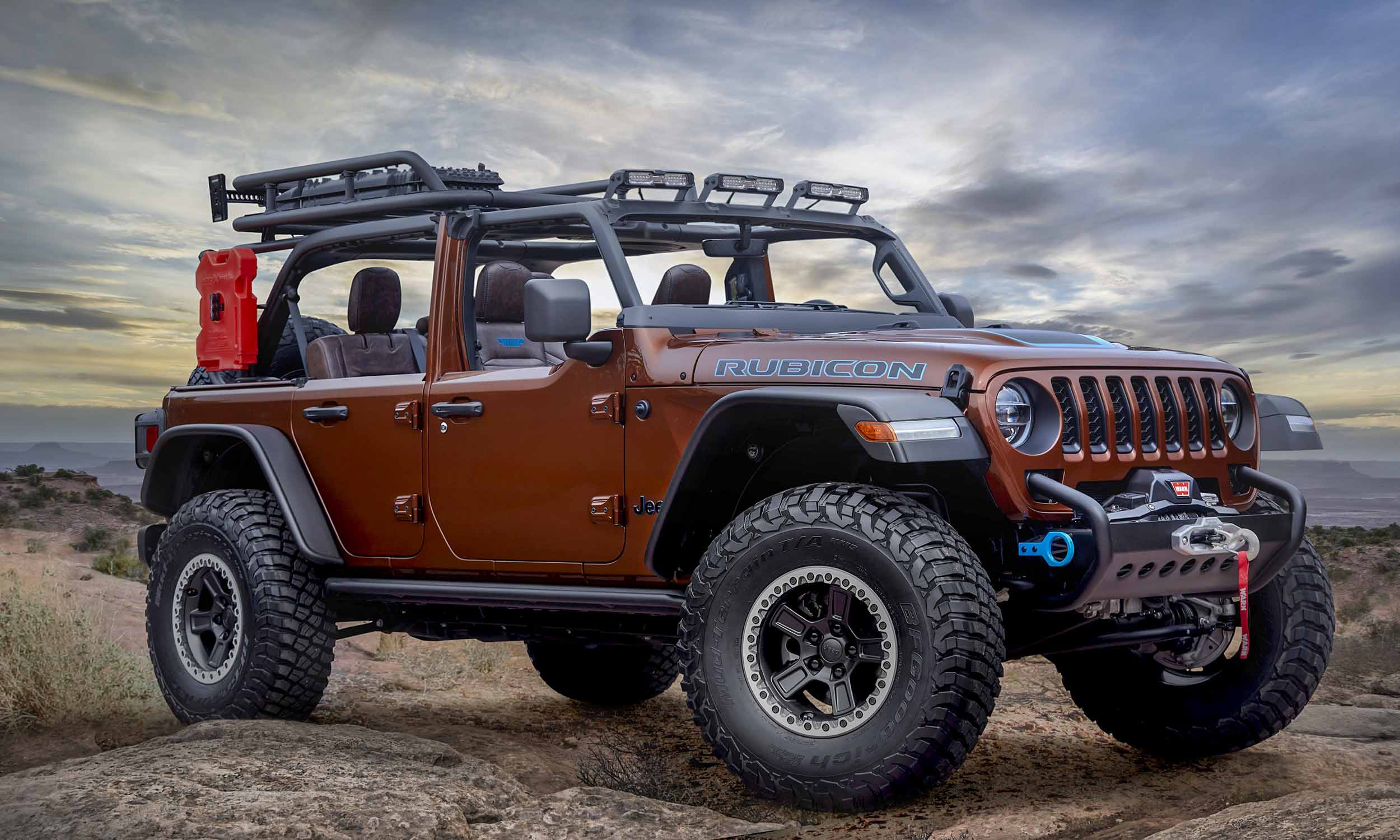 Jeep Birdcage Concept
Engineers and designers created this extreme Wrangler concept to showcase the possibilities of Mopar and JPP accessories. Based on the Wrangler Rubicon 4xe, the Birdcage Concept provides an open-air experience made possible by removing the windshield (and wipers) as well as the roof. The Tobacco Leaf and Cocoa Brown leather seats go well with the Eagle Brown exterior paint. The 4xe Surf Blue accents can be found throughout the vehicle, including custom tow hoops and interior accent stitching. Flat fender flares painted in Granite Crystal have removable daytime running light covers for improved off-road clearance. 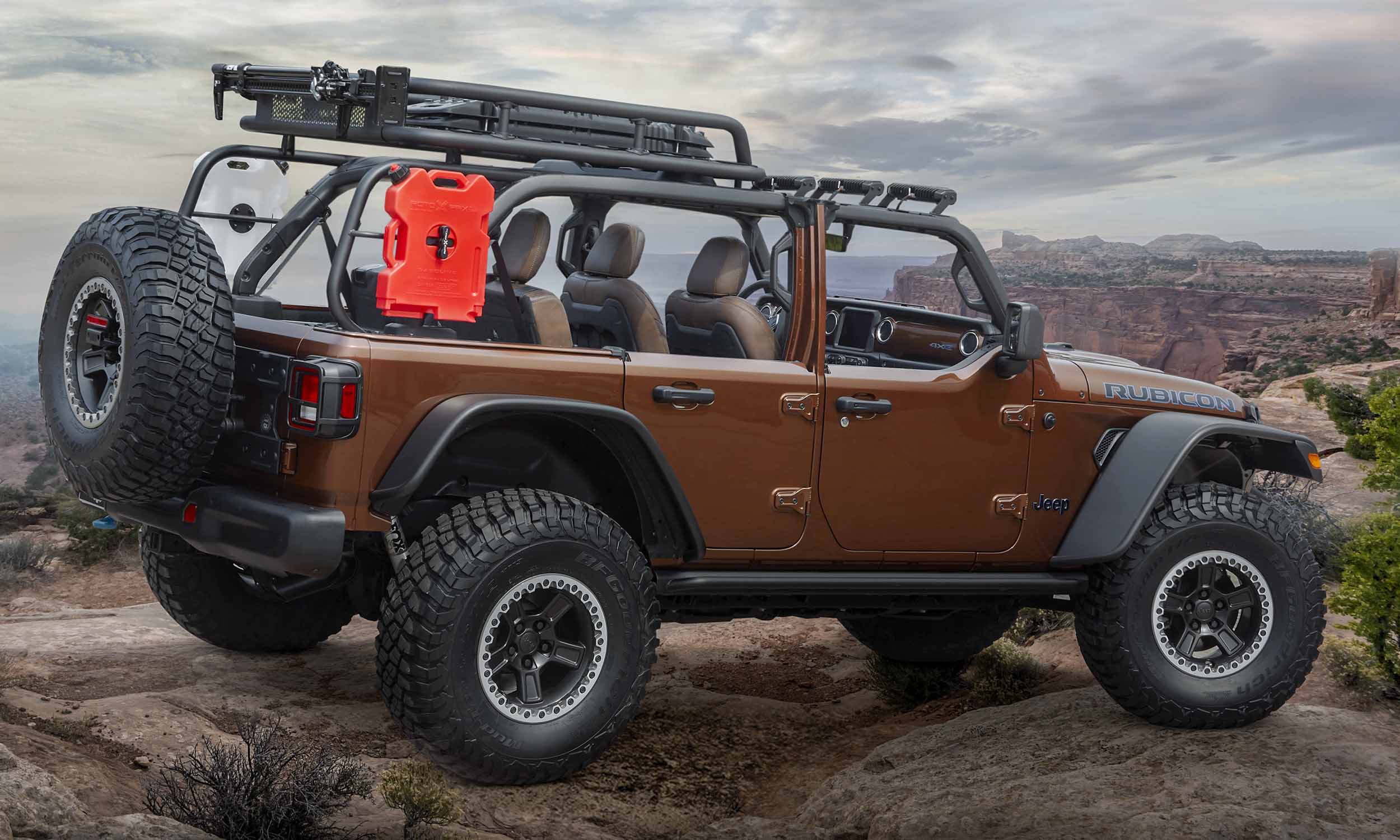 Jeep Birdcage Concept
The Birdcage rides on an industry-first JPP 2-inch lift kit with Fox Shocks that have been specifically tuned for the Wrangler 4xe PHEV. A custom rock-slider skidplate connects to two 2-inch steel support bats and integrates well with the custom 7-slot grille. This skidplate also protects the recessed Warn winch. Providing proper traction are BF Goodrich KM3 37-inch off-road tires that fit under custom flat-fender flares. Underbody rock lights at each corner illuminate the terrain for better nocturnal navigation, and custom rock rails create additional protection for the body. At the rear, the Mopar design team created an Add-A-Trunk with a decklid panel that can be locked as additional security for the open-air concept. 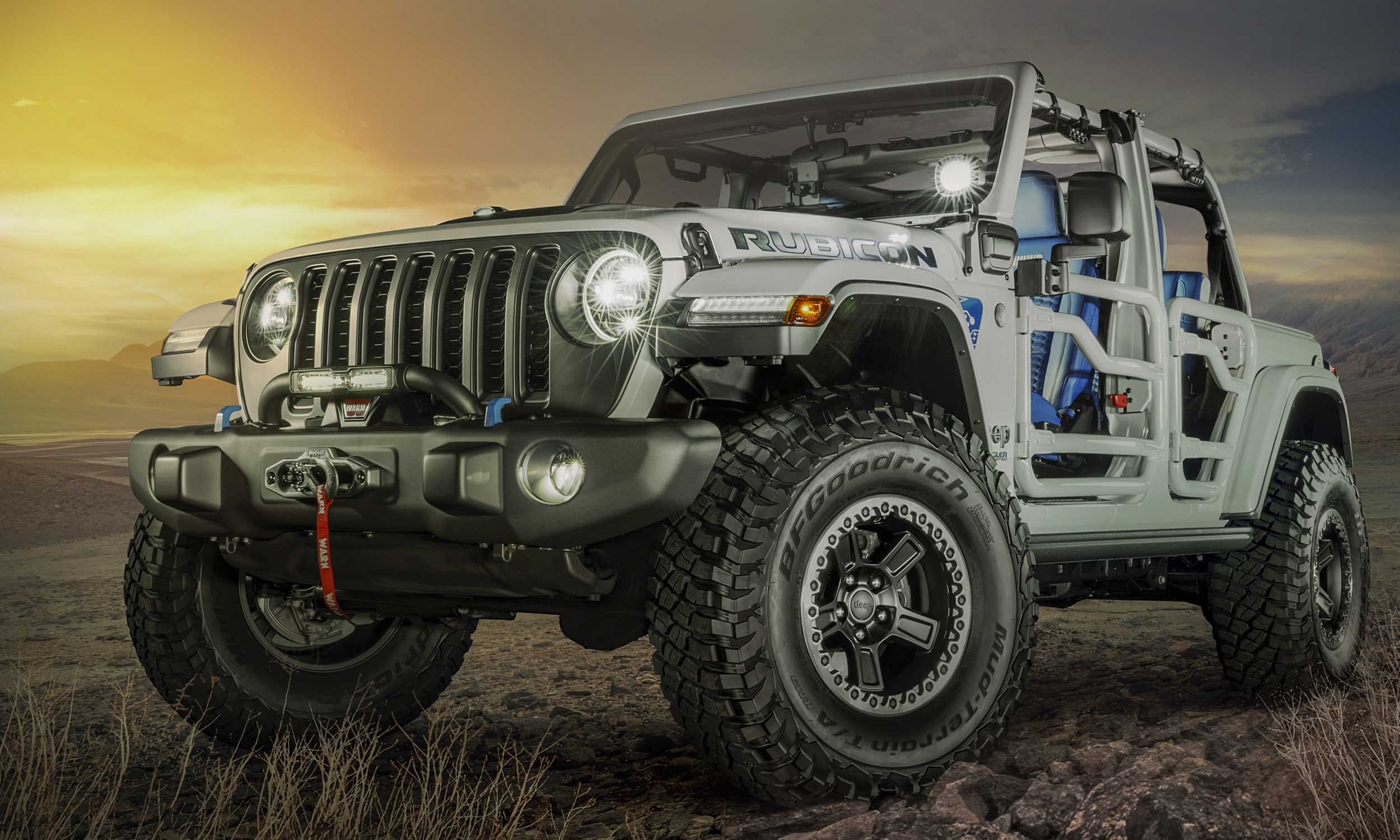 Jeep Wrangler 4xe Concept
The Wrangler 4xe concept offers a look at how owners of Jeep’s new plug-in electric SUV can customize their vehicles for improved performance, thanks to a plethora of factory-backed parts and accessories from Jeep Performance Parts. This custom SEMA build begins with a JPP 2-inch lift kit with FOX shocks specifically tuned for Wrangler 4xe, and JPP beadlock-capable wheels (with functional beadlock rings) mounted with BFGoodrich KM3 37-inch tires. The JPP stamped-steel front bumper features a custom single-hoop winch protector with an LED light above a Warn winch, while underbody rock lights at all four corners illuminate the ground. A JPP Gorilla Glass windshield is three times stronger than stock glass, and LED lights sit at the base of the A-pillars. 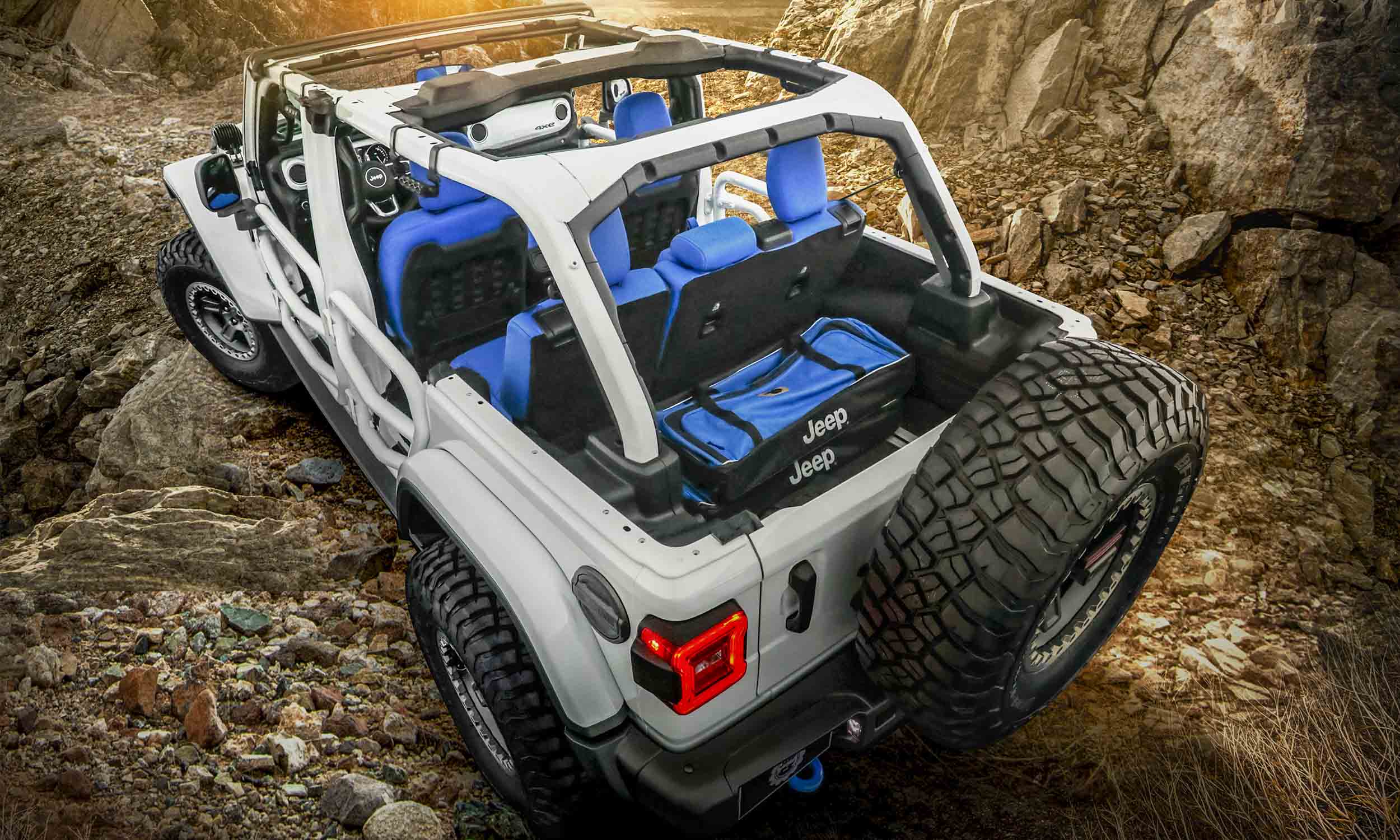 Jeep Wrangler 4xe Concept
The Jeep Performance Parts tube doors and rock rails of the Wrangler 4xe concept are painted in a premium Ivory Pearl, with original accents including custom fender and hood graphics painted in Dark Neutral Metallic Grey. A JPP swing gate hinge reinforcement allows a full-size spare wheel and tire to be mounted on the swing gate. Inside, seats are swathed in Mopar Blue Katzkin leather with tungsten stitching, sitting on a concept 3-piece JPP vinyl floor with four drain plugs for cleaning. A custom JPP instrument panel rail system holds items such as cell phones or cameras. This Wrangler 4xe concept also features a custom trail-rail system to secure gear, a JPP swing-gate flip-down table, and a custom onboard compressor integrated into the tailgate. 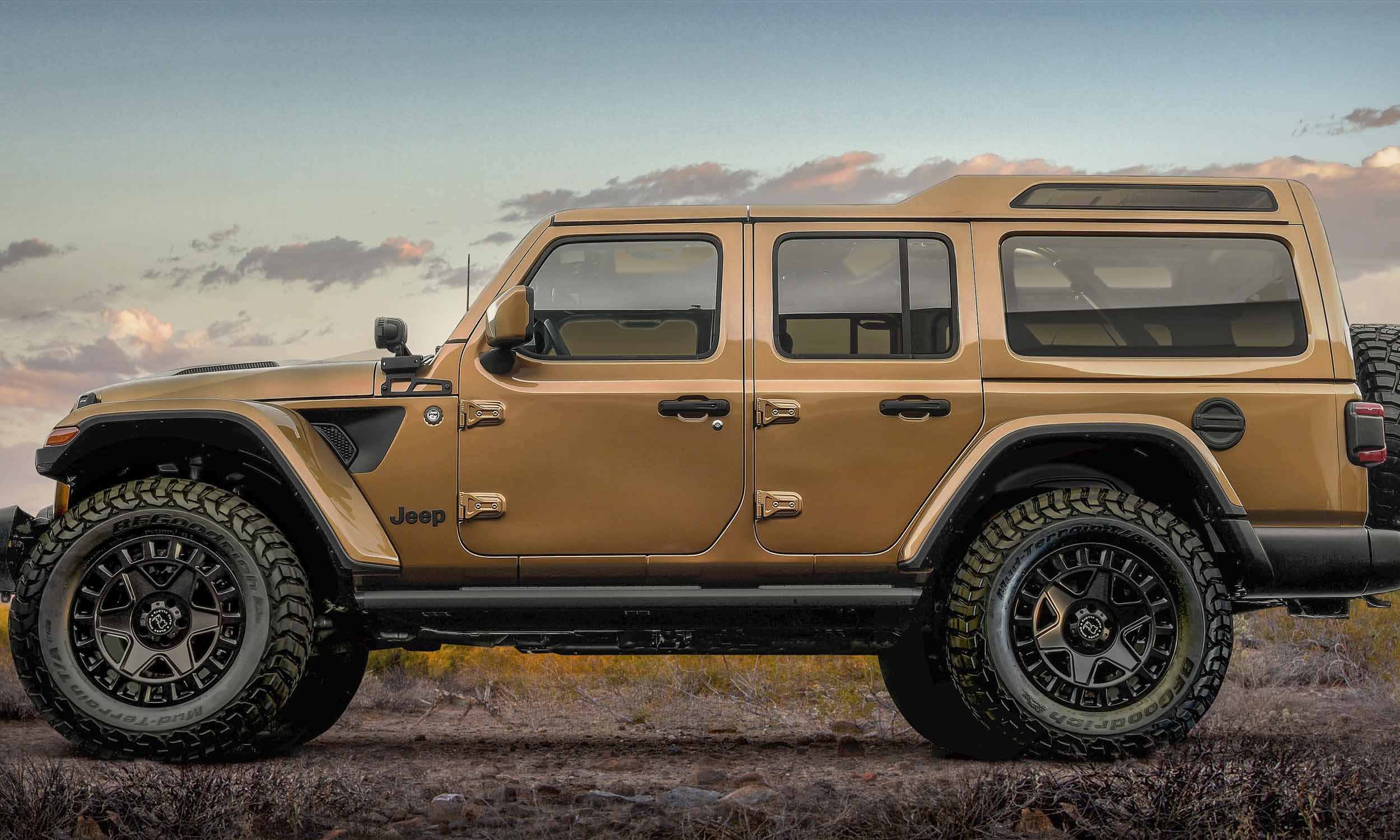 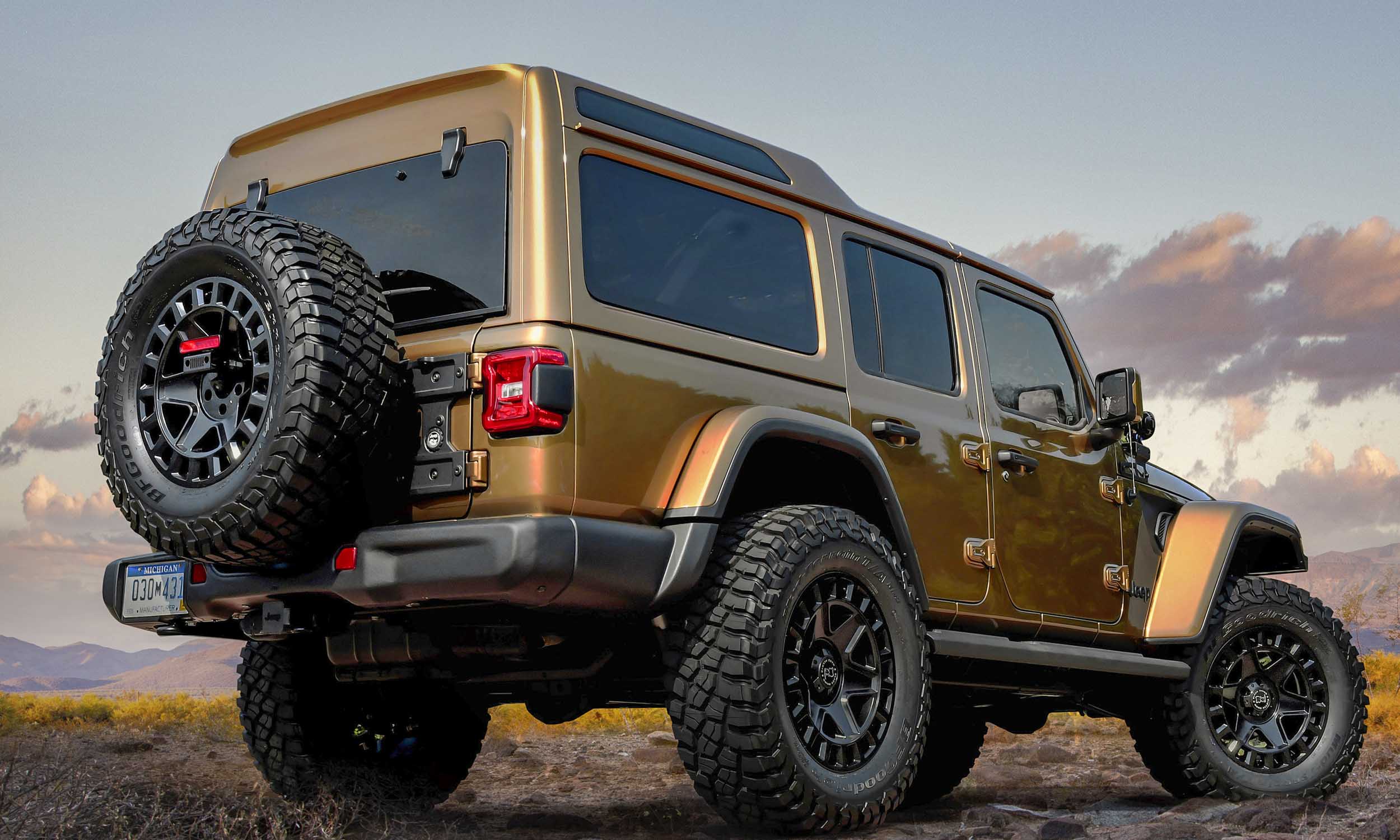 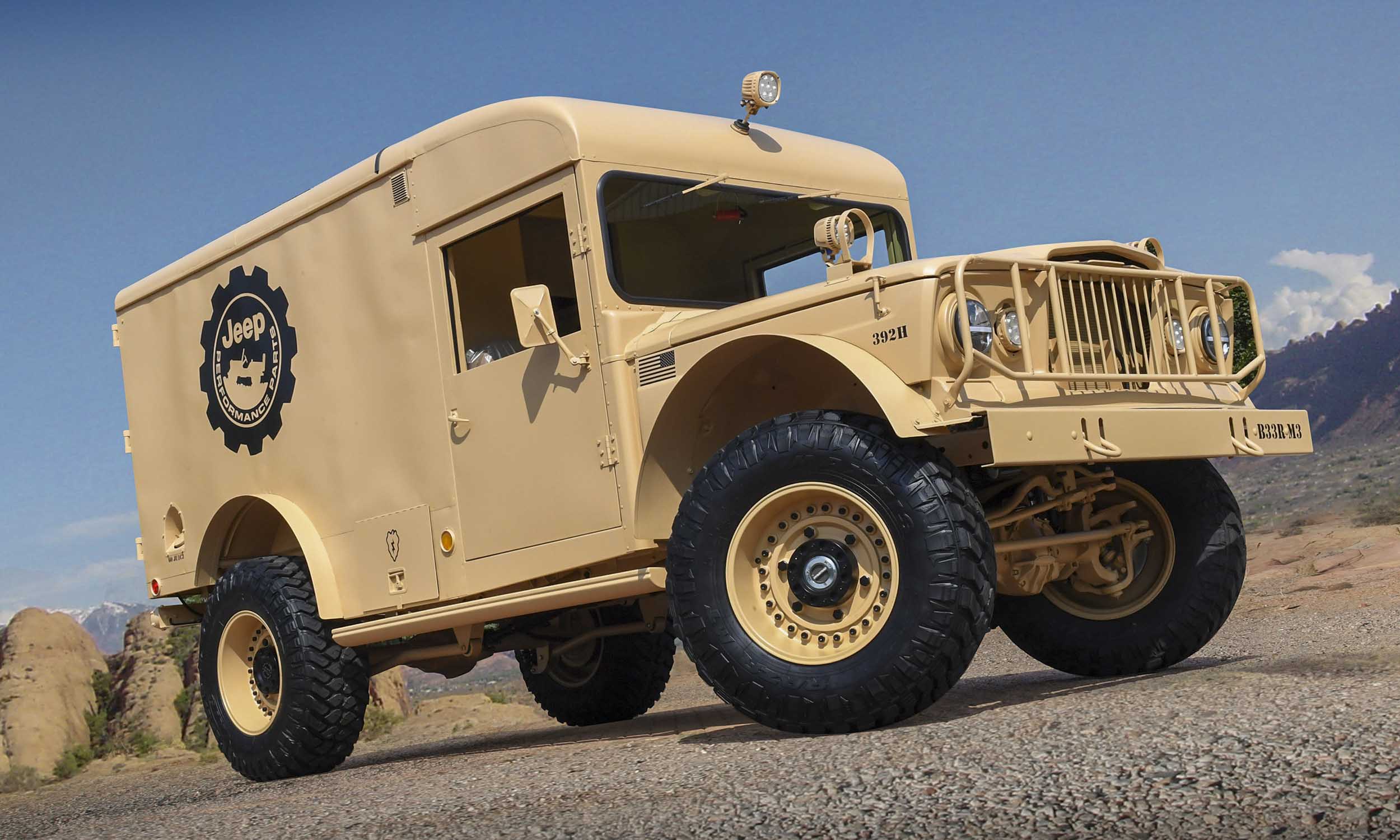 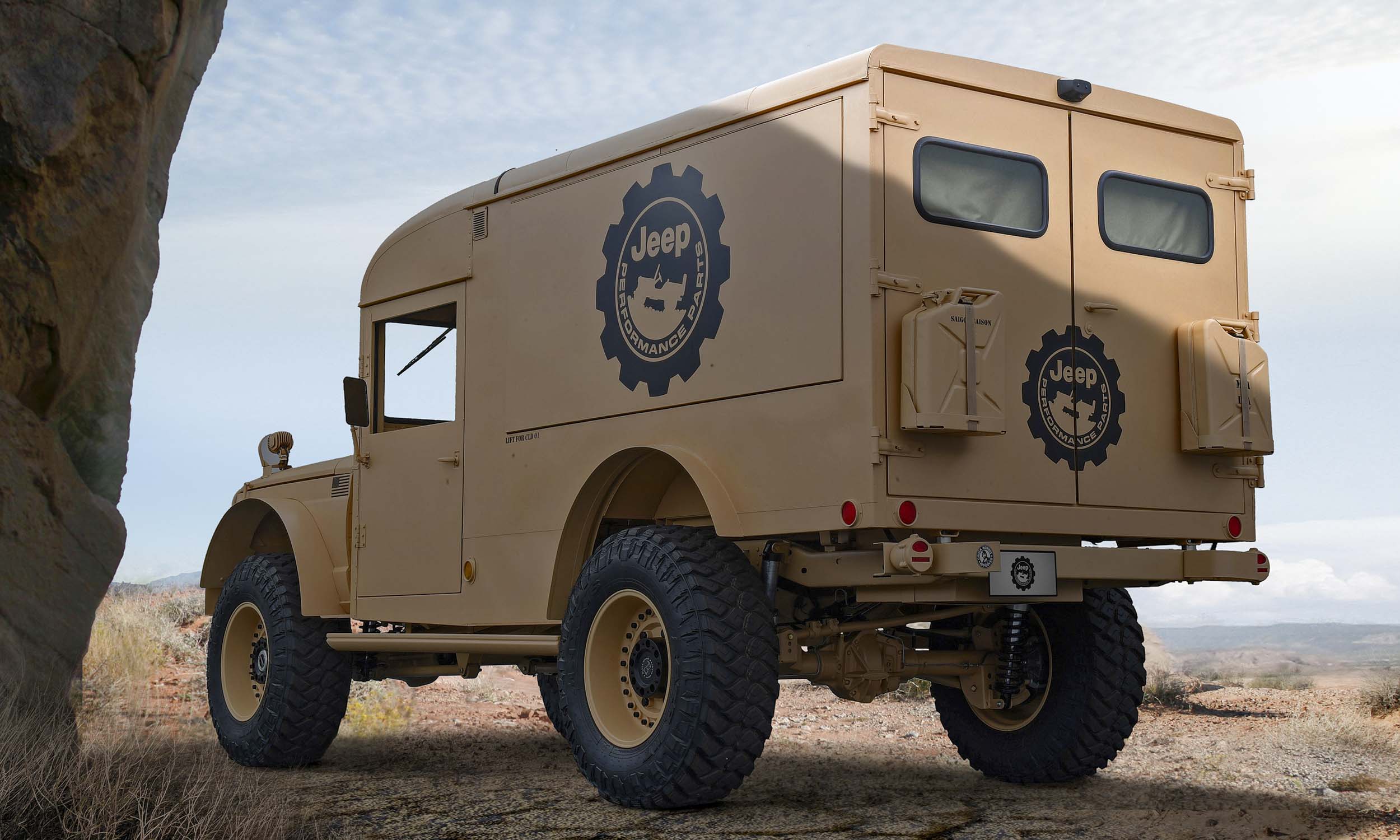 Kaiser Jeep M725 Concept
The custom roof panel over the cargo area of the Kaiser Jeep M725 Concept can be raised 16 inches to create standing room for off-road support personnel using the vehicle. On the driver’s side, an open panel creates space for food and beverage service or parts distribution. At the front, the vehicle features concept 7-inch LED headlights flanked by pairs of Jeep Performance Parts 5-inch off-road LED lights. This Jeep’s boots on the ground are 20-inch Black Rhino Armory wheels wrapped with 40-inch tires. Inside, the Kaiser Jeep M725 features low-back Wrangler seats in tan canvas, as well as a custom steering wheel and modern gauges. 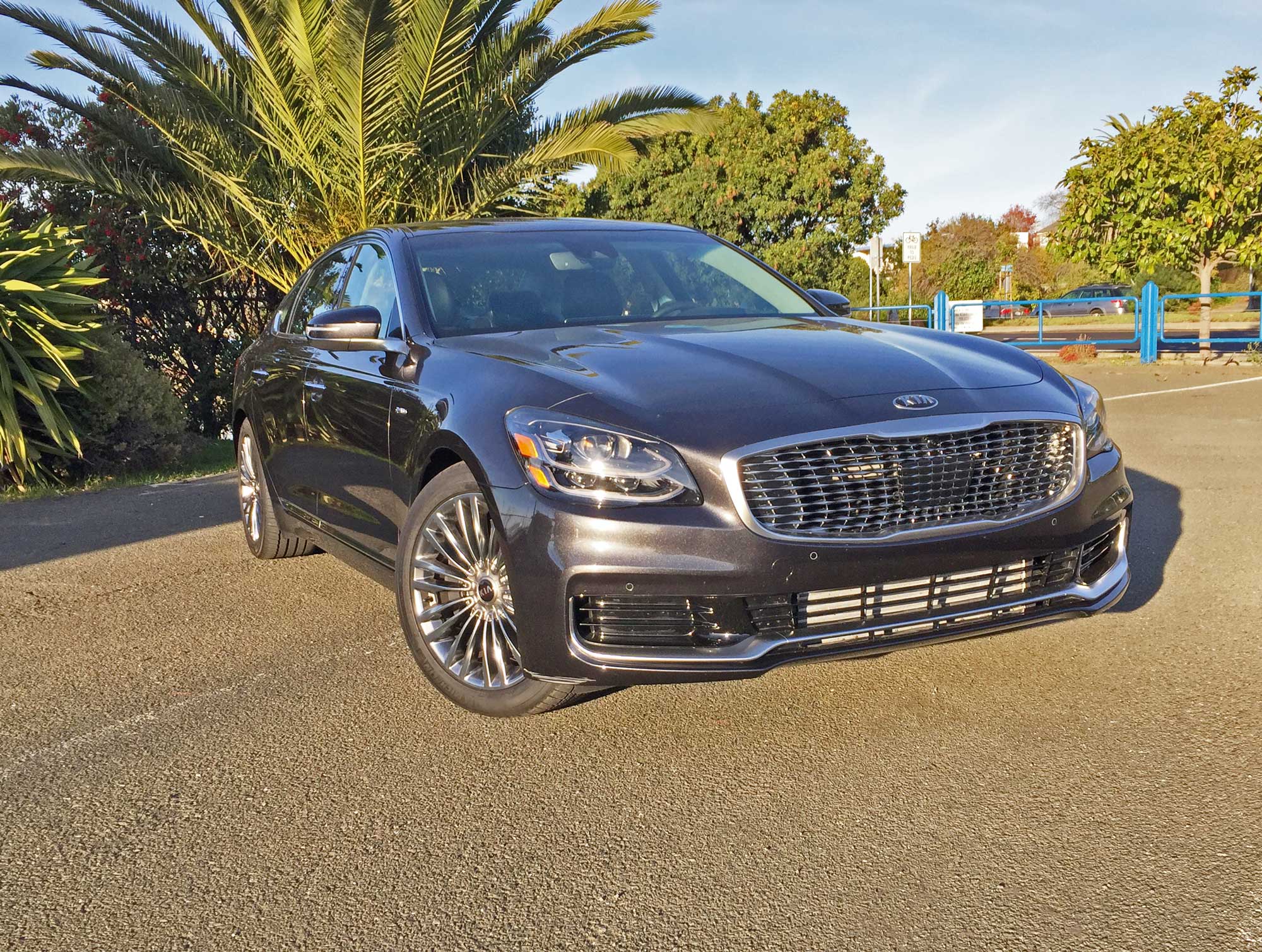 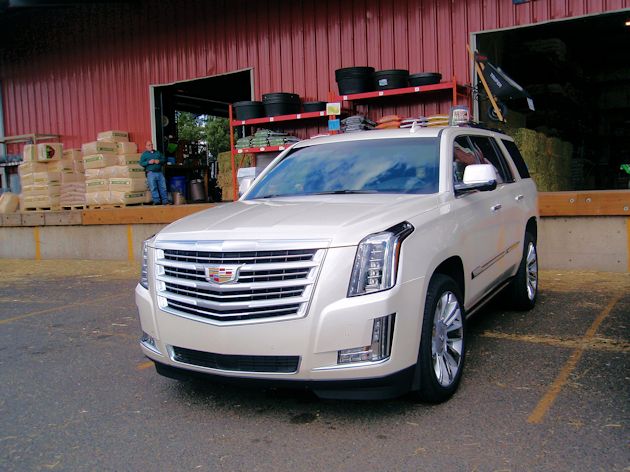