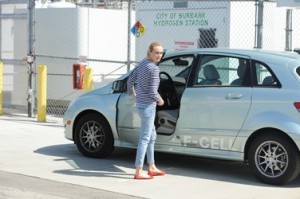 About 35 southern California residents are driving Mercedes-Benz hydrogen electric fuel cell vehicles as the company does real world tests of the promising technology.

The B-Class F-CELL, which converts compress hydrogen into electricity, is the first zero-emissions vehicle available from Mercedes in the U.S.? Actress Diane Kruger, who stars in “Farewell, My Queen,” is one of more than 35 environmental enthusiasts and early adopters.

“I’m excited to be driving the F-CELL. It?s environmentally conscious, fun to drive and gets lots of attention on the streets,” said Diane Kruger. ?I can travel more than 200 miles on a full tank and it’s easy to refuel.” 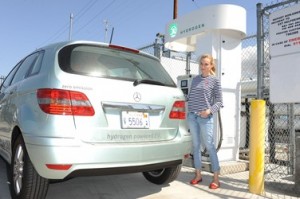 More than three dozen of the electric vehicles, powered by hydrogen fuel cells, are now available in Southern California and will be available in Northern California in June. ?Several fueling stations are now open in Los Angeles and surrounding areas, including Newport Beach, which opened this past March. Those interested in leasing an F-CELL can get additional information and apply online at http://www.mbusadigitalmedia.com/fcellsurvey/index.aspx.

In addition to the F-CELL, Mercedes-Benz is offering eight alternative powertrain vehicles in the U.S. from the all-new 2012 M-Class BlueTEC SUV to the popular S400 HYBRID, which is a top choice for Hollywood actors and those in the entertainment business that deal with daily city traffic.