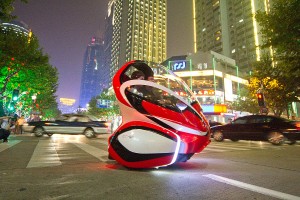 With the rapid urbanization, aging populations and more demand for personal mobility, General Motors engineers are looking into the future to vehicles like the Electric Networked Vehicle, or EN-V.

?Building more and wider roads is expensive and doesn’t really solve all of the problems, meaning that smarter solutions are needed,? he says. ?Public transportation is important, but with so many people going from point to point in different directions, some personal transport is needed as well.?

Following completion of the Chevrolet Sequel fuel cell vehicle program in 2007, Borroni-Bird began working on what became the EN-V program. The first concepts debuted at the recent 2010 Expo Shanghai, where they wowed crowds and collected awards.

?One step is to reduce the physical footprint of vehicles, especially since so many only carry one or two occupants anyway,? he says. ?By shrinking EN-V down to just two wheels and two upright seats, several of these vehicles can fit in the same physical space as one traditional car. Electric propulsion in short-range urban commuter vehicles will allow air quality in megacities to be vastly improved.? 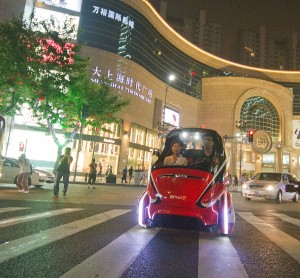 As part of a public sharing network, a user could summon an autonomous vehicle to his or her location using a smartphone application and then sit back and relax while they are whisked off to a destination. Without the need to drive, passengers are able to take advantage of OnStar communications technology to work or play while safely riding.

The sensing technology, derived from the winning vehicle in the 2007 DARPA Urban Challenge allows EN-V to detect other vehicles, obstacles and pedestrians, virtually eliminating crashes.

For those that prefer to drive, the light and nimble, fun-to-drive EN-V offers full manual control while its autonomous mode can provide a new degree of independence to the young, old and physically challenged.