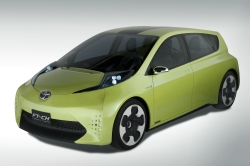 Toyota unveiled a concept at the North American International Auto Show (NAIAS) in Detroit that shows one of the directions the company is looking as it prepares to expand its Prius lineup. The FT-CH is a concept that would address Toyota?s stated strategy to offer a wider variety of conventional hybrid choices to its customers, as it begins to introduce plug-in hybrids (PHVs) and battery electrics (BEVs) in model year 2012, and hydrogen fuel cell vehicles (FCHVs) in 2015 in global markets.

?Within the next 10 to 20 years, we will not only reach peak oil we will enter a period where demand for all liquid fuels will exceed supply,? said Jim Lentz, TMS president. ?A century after the invention of the automobile, we must re-invent it with powertrains that significantly reduce or eliminate the use of conventional petroleum fuels. One of many alternatives is through what is commonly called the electrification of the automobile. By far, the single most successful example of this has been the gas-electric hybrid.?

The CH stands for compact hybrid as in compact class and it?s a concept that can best be defined by comparing it with the mid-size class Prius. The FT-CH captures the spirit and functionality of a car that thrives in the inner-city environment; sized right to be nimble, responsive and maneuverable.

?It?s a package Toyota dealers and customers have been asking for,? added Lentz. 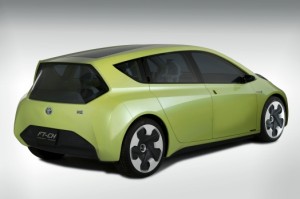 The FT-CH was styled at Toyota?s European Design and Development (ED?) center in Nice, France. Compared to Prius, it is 22 inches shorter in overall length, yet loses less than an inch in overall width. In spite of its compact external dimensions, FT-CH was designed for maximum passenger comfort and interior roominess, with an imaginative sense of style.

ED? designers looked to capture the vivid, high-energy appeal of what has come to be called the 8-bit generation. Popularized in the early 80?s, 8-bit microprocessor technology dominated the budding home video game industry. Today, 8-bit is considered a specific retro-style that is embraced by such things as 8-bit genre music and 8-bit inspired art.

The direct reference to the 8-bit generation is meant to be fun and innovative, colorful and stylish, with strong appeal to young buyers. Lighter in weight and even more fuel efficient than Prius, the concept specifically targets a lower price point than Prius, thus appealing to a younger, less-affluent buyer demographic.

Pointing to how Prius has become a universal icon for hybrid technology, Lentz confirmed that TMS is developing a Prius family ?marketing strategy? for North America that will take full advantage of the Prius brand equity.

?The strategy is still taking shape and obviously it will require additional models to qualify as a family,? said Lentz. ?Among others, the FT-CH is a concept that we are considering.?