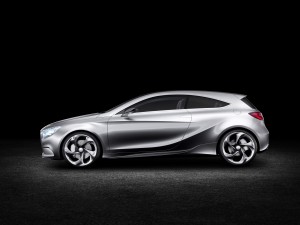 High fuel prices have caused Mercedes-Benz to rethink sizing and propulsion options on the premium brand offerings and the company is testing the waters in the U.S. ?by showing the Concept A-Class at some of the recent auto shows.

“The Concept A-Class introduces the new Mercedes-Benz design idiom into the premium small car segment in a sculptured, light and expressive interpretation,” says Professor Gorden Wagener, Head of Design at Mercedes-Benz. “We use the term ‘captured energy’ to express the sheer dynamism exuded by the Concept A-Class. Our formal sources of inspiration were the wind and waves, as well as aviation engineering, resulting in this “cool” look.”

The 210-hp engine, designed for transverse installation, uses direct injection and turbocharging offers high performance together with minimal emissions and fuel consumption. Other highlights of the all-aluminum engine include injection pressures of up to 2,900 psi and fast-acting piezo injectors.

A major characteristic of the new design idiom is interplay between lines and surfaces – which the designers refer to as a “clean” concept. Concave and convex surfaces create a unique sculpture-like presence. The door handles are recessed into the doors and emerge electrically at the touch of a button.

The unusual wing-like structure of the exterior mirrors is suggestive of flow and lightness. Another prominent feature is the open side skirt, which creates a unique light-and-shadow effect. Reminiscent of a turbine rotor, the large 20-inch wheels reinforce the impression that the Concept A-Class has been shaped by the wind.

The front end of the Concept A-Class catches the eye with the Mercedes-Benz emblem surrounded by a star-filled sky. Where there are usually openings or louvers, the radiator grille consists of numerous metallic silver “dots” on black stems. This theme is reflected in the design of the wheels. 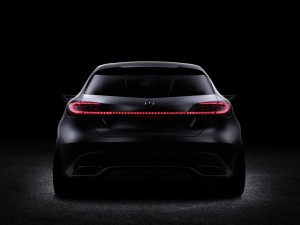 The wide rear end exudes power and athleticism, and is enlivened by interplay between convex/concave surfaces and pronounced edges. The tail lights continue the lines of the muscular shoulders towards the rear, emphasizing the car’s width with their horizontal orientation. The aerodynamic spoiler lip in the tail lights improves efficiency while the diffuser creates a down force to aid handling.

The interior of the Concept A-Class is flooded with light from the large panorama roof and gives it a futuristic look.? The eye-catching dashboard takes the form of an aircraft wing and has a translucent, stretchable cloth covering. The sophisticated fabric is reminiscent of a canvas covered aircraft wing with underlying struts. 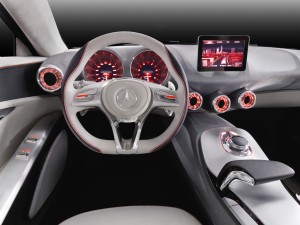 The air vents in the dashboard are inspired by the engines of a jet aircraft and the translucent backlit vents change color depending on the temperature the passengers have selected for the climate control system – they are blue if cool and red when the heat is on. The prominent gauges in the instrument cluster were inspired by the afterburner of a jet engine and are lit in red. The center console is designed as a high-tech flight control panel with a gear selector in the shape of a “thrust control” lever. With their molded-over head restraints and pronounced lateral support the seats are reminiscent of a pilot seat in a jet fighter.

Titanium and silver tones are combined with a light, elegant beige in the interior. Magenta is used to produce highlights that contrast with the car’s alubeam silver paint finish, which follows the dramatic contours of the exterior like liquid silver.

The Concept A-Class makes use of modern materials such as the high-tech covering on the dashboard, high-grade nubuk leather and metallic-finished leather, which is created by dying semi-aniline with metallic pigments followed by embossing. This links the 125-year tradition of the Mercedes-Benz brand and its future innovation.

A smartphone is fully integrated into the infotainment systems of the Concept A-Class. When the phone is inserted into the recess provided in the center console, it is automatically synchronized with the COMAND multimedia system and all the functions of the smartphone, including internet radio, email and social networks such as Twitter or Facebook, are shown as applications on the seven-inch display and operated by the rotary/push control.

The visual presentation of the screen elements is unique with a deep, three dimensional look created by laser-like magenta-colored lines. This near production display was created by designers and engineers at the Mercedes-Benz development laboratory in Palo Alto, California. The menus in the Concept A-Class are in both English and Mandarin. 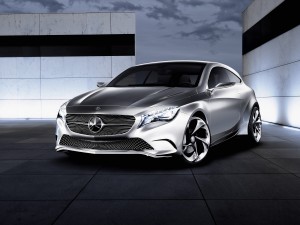 A special lighting effect is created by the headlamps full-LED high-performance lights to incorporate the starry sky motif of the radiator grille with numerous light points. The daytime running lamps are made of 90 optical fibers with aluminum sleeves and are arranged in a wing shape within the headlamp. The tentacle-like fibers form individual, diffused light sources to create a dramatic contrast between soft and bright.

Familiar from the 2012MY CLS-Class, the LED high-performance headlamps of the Concept A-Class combine active lighting functions with LED technology. The projection module of these LED headlamps is no longer round but flatter and more aggressive. This distinct design is reinforced by the matte carbon-fiber housing, which contrasts with the aluminum surround of the projection module.

Optical fibers with aluminum sleeves are also used in the tail lights, using 120 fibers in the C-shaped tail light clusters to create a unique visual effect with their subtle glow. When braking, the continuous light band between the two tail lights also illuminates to make the Concept A-Class appear even wider. The turn signals are self-contained elements within the center of the tail lights. The housing of the tail light is made of carbon-fiber with the numerous red elements providing visual depth. 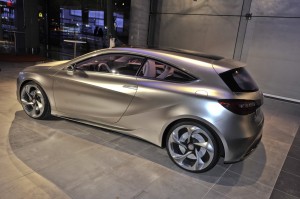 Safety pioneer Mercedes-Benz is showing yet another milestone in automotive safety technology in the Concept A-Class – a radar-based collision warning system with adaptive Brake Assist – a world first in the premium small car segment. This system