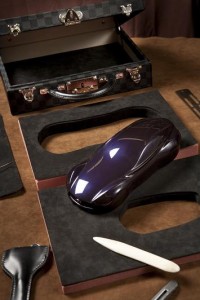 One of the hits of the 2009 car show season was the striking Essence concept car unveiled as part of Infiniti?s 20th anniversary celebration.?? Destined to be a prize for collectors, Infiniti has announced the production of a Limited Edition Collector?s ?Essence Sculpture,? inspired by the stunning Infiniti Essence concept car, which was unveiled last year in celebration of the automaker?s 20th anniversary. Made from solid resin and penned by Essence?s original vehicle designer under the supervision of Senior Vice President and Chief Creative Officer Shiro Nakamura, the sculpture will be restricted to 300 individually numbered units worldwide. No second production run will be made.

Louis Vuitton, which created bespoke luggage for the actual Essence concept car, has crafted a carrying case for the very first Essence Sculpture. The second collaboration with the world leader in luxury epitomizes Infiniti?s quest for ultimate luxury and savoir-faire. For this special order, Louis Vuitton craftsmen designed an original Louis Vuitton Damier Graphite case to serve as a high-quality transport and presentation. It was handcrafted in Louis Vuitton?s historic workshop in Asnieres, France, where all special orders are made.

The exclusive sculptures are available at infinitilifestyle.com beginning in December. The cost is $300.00 USD plus shipping. Personalized Louis Vuitton Damier Graphite cases can be ordered through the company?s special order workshop in France.