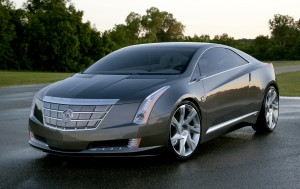 Shown first as a concept at the North American International Auto Show, the striking Cadillac Converj electric car is coming to life.? Powered by technology similar to the Chevrolet Volt, the luxury coupe will be the Cadillac interpretation an extended-range electric vehicle called the ELR.

ELR?s drivetrain consists of a T-shaped lithium ion battery, an electric drive unit, and a four-cylinder engine-generator. It uses electricity as its primary source to drive the car without using gasoline or producing tailpipe emissions. ?When the battery?s energy is low, the ELR seamlessly switches to extended-range mode to enable driving for hundreds of additional miles. 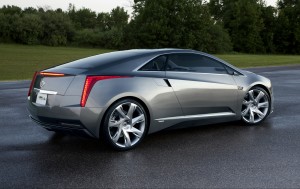 ??The concept generated instant enthusiasm,? said Don Butler, vice president-Cadillac Marketing. ?Like other milestone Cadillac models of the past, the ELR will offer something not otherwise present ? the combination of electric propulsion with striking design and the fun of luxury coupe driving.?

?There?s no mistaking it for anything but a Cadillac, an aggressive, forward-leaning profile and proportion showcases a uniquely shaped, modern vision of a personal luxury 2+2,? Welburn said. 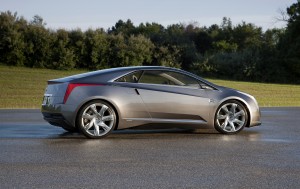 Production vehicle details and prices are still unannounced, but industry rumors suggest posh appointments, a close approximation to the initial concept design and a price tag in the mid $50,000 range.? No one is speculating how long Cadillac will take getting this beauty into showrooms.