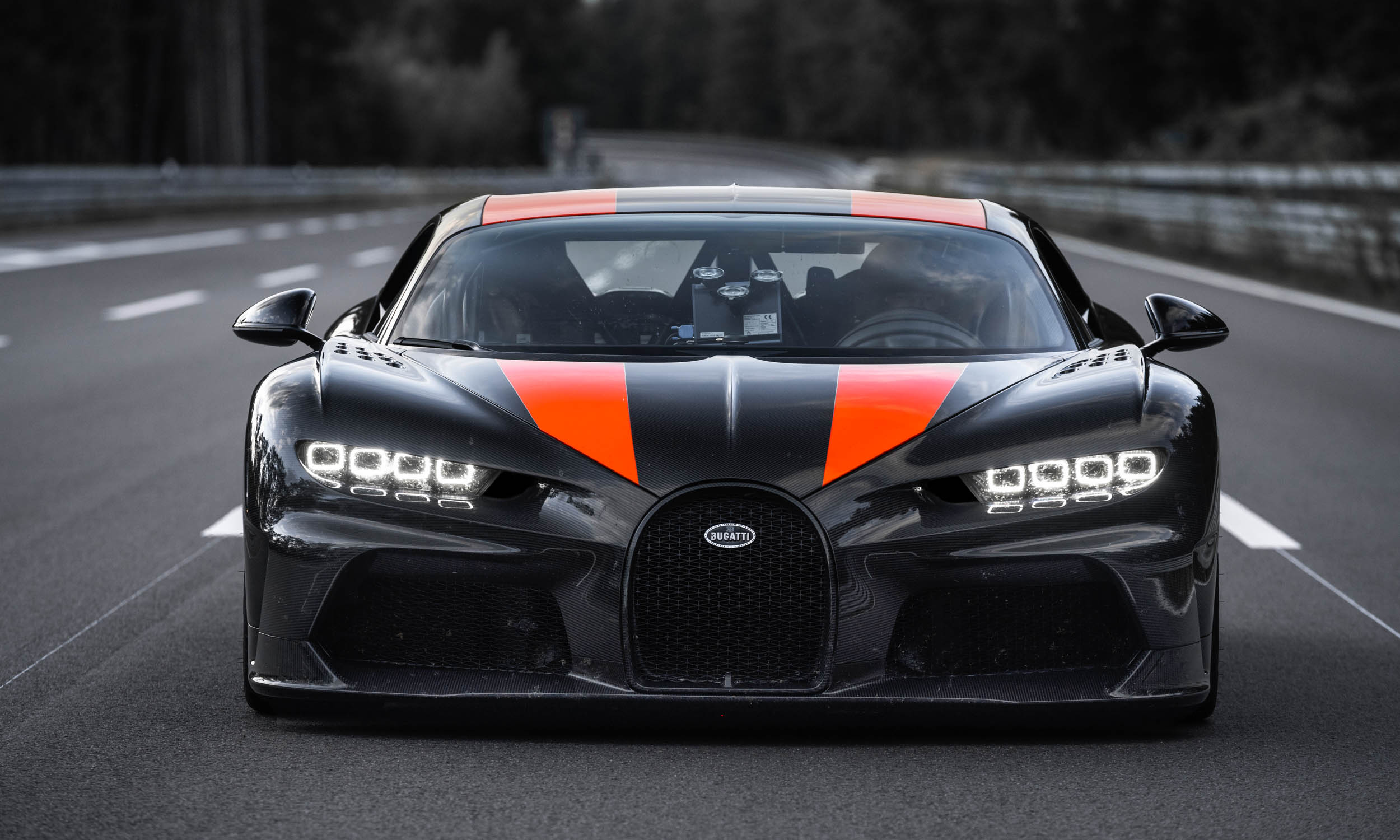 304 MPH
When Bugatti introduced the Chiron, it was anticipated that the car would be able to break 300 mph; however, the production model has been electronically-limited to a “mere” 261 mph (420 km/h). Today the company announced that a pre-production Chiron has broken the magical 300-mph mark, recording a top speed of 304.773 mph (490.484 km/h). 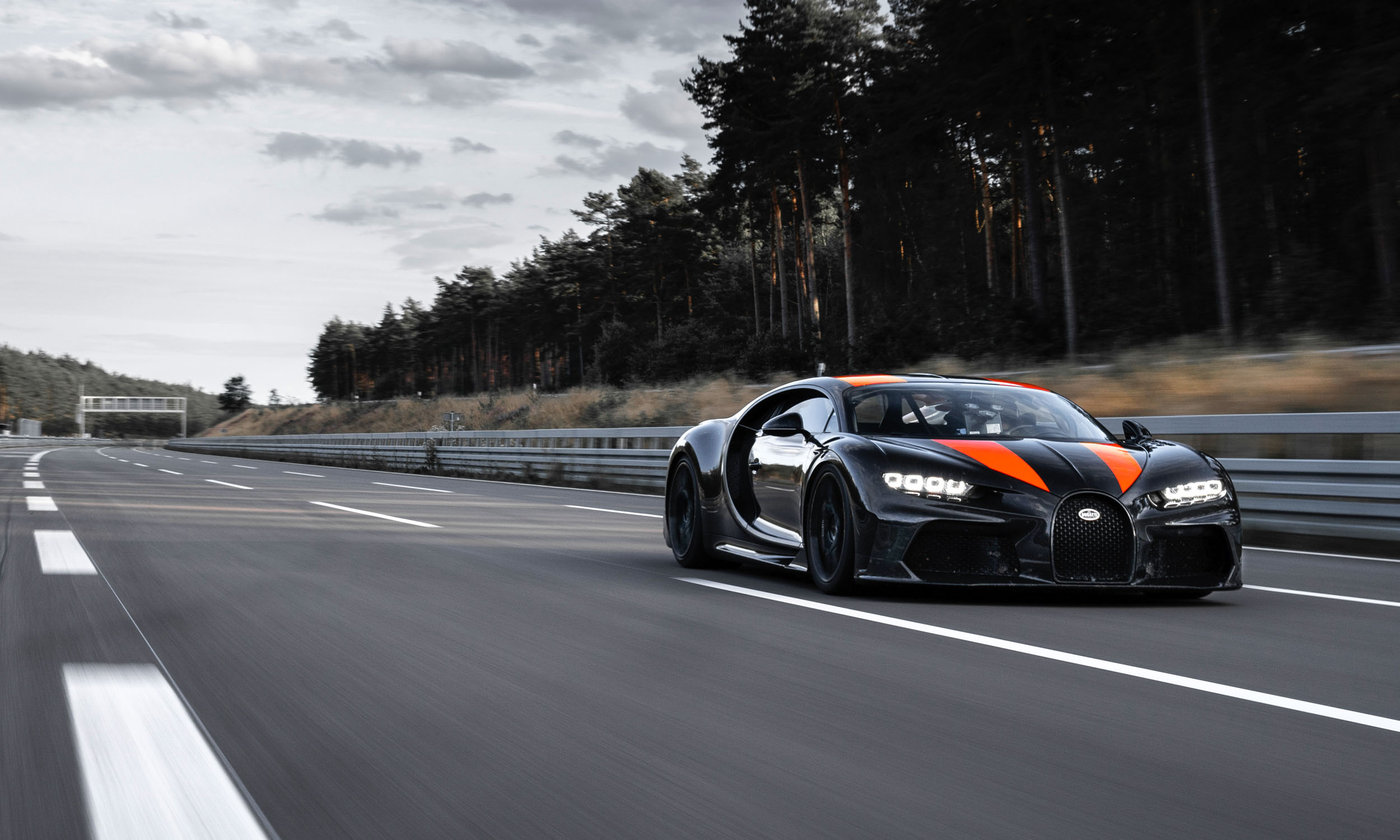 First Ever
“Bugatti has once again shown what it’s capable of. With this new record of the Chiron we enter again uncharted territory. Never before has a series manufacturer reached this high speed,” noted Bugatti President Stephan Winkelmann. “Our goal was to be the first manufacturer ever to reach the magic 300-mile-per-hour mark. We have now achieved this – making ourselves, the entire team and myself, incredibly proud,” Winkelman effused. 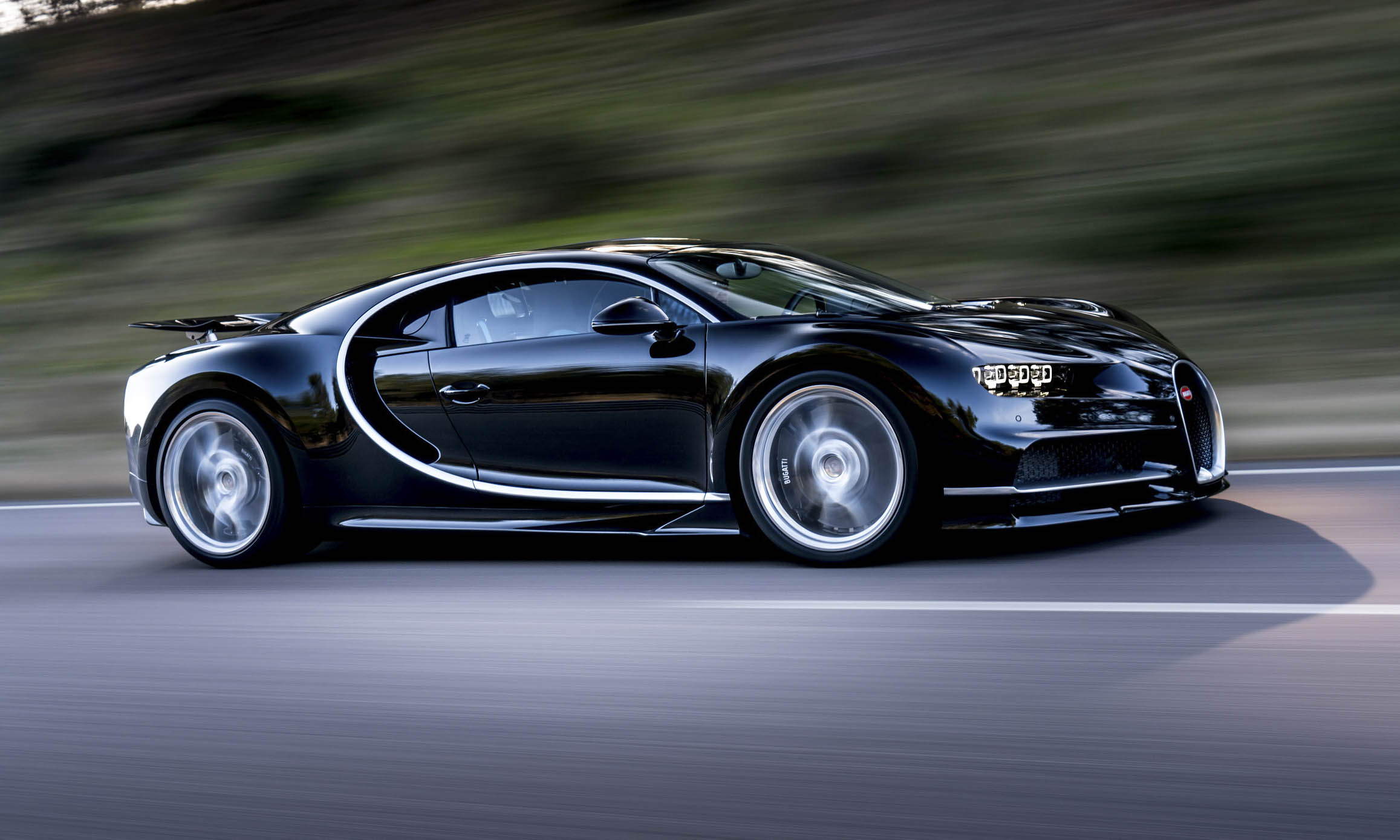 1500 Horsepower
The Chiron exists as Bugatti’s flagship hypercar, introduced a few years ago at the Geneva Motor Show. This incredible machine derives power from an 8.0-liter quad-turbo W16 engine producing 1500 horsepower and an insane 1180 lb-ft of torque, available as low as 2000 rpm. The Chiron uses a 2-stage turbocharging system that starts with two turbos engaged for quicker, controlled acceleration — then at 3700 rpm the other two turbos kick in. 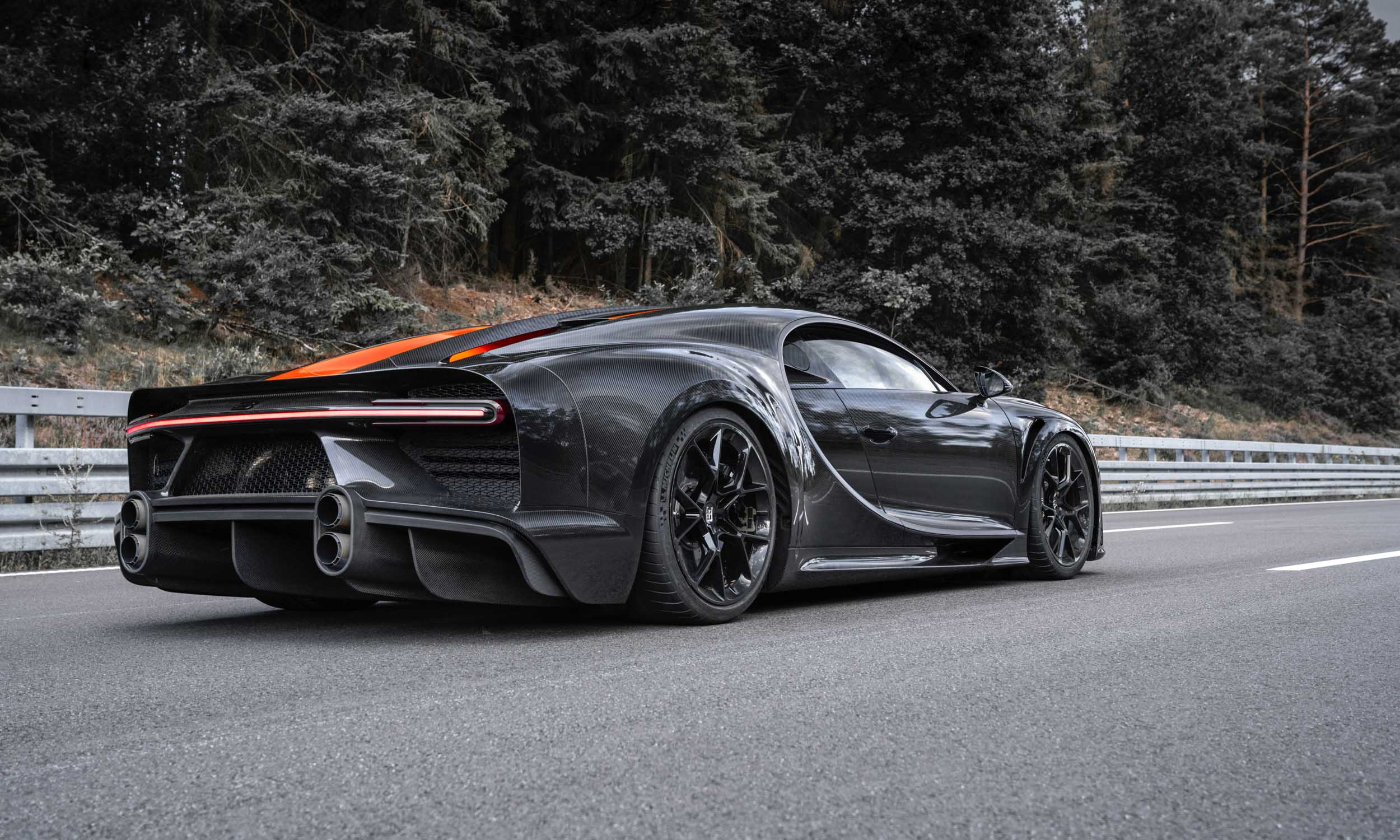 Incredibly Fast
The performance stats for the Chiron are practically off the charts: acceleration to 62 mph happens in less than 2.5 seconds, 124 mph in around 6.5 seconds and — most amazing of all — 186 mph in less than 13.6 seconds. And now Bugatti can add a top speed in excess of 300 mph — the first production car (or near-production) to ever achieve this feat. 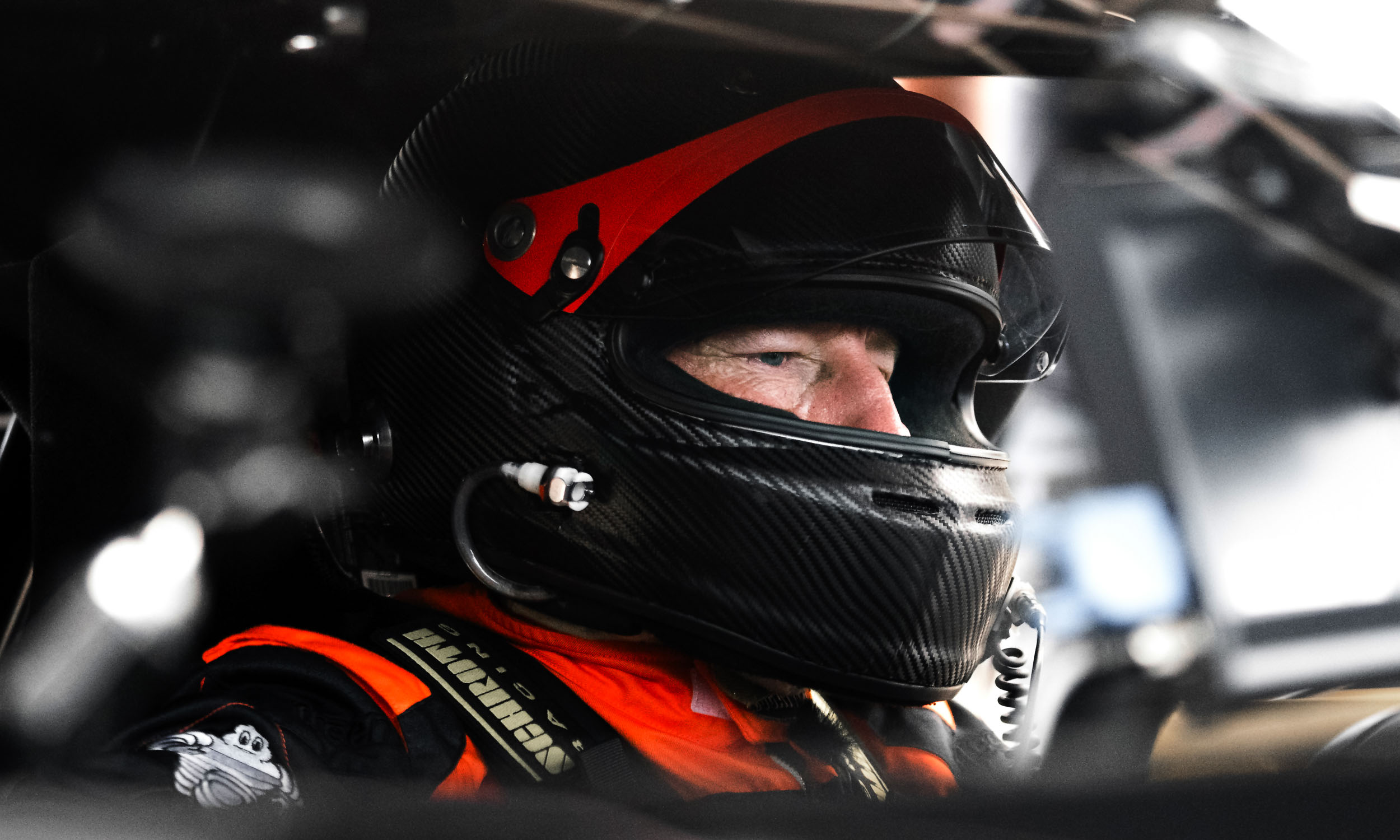 Driver Andy Wallace
Bugatti test driver and Le Mans winner Andy Wallace was at the helm during the high-speed run. “An incredible speed. It’s inconceivable that a car would be capable of this. But the Chiron was well prepared and I felt very safe — even in these high speed ranges,” said Wallace. “Even at the first attempt I felt this would work. The Chiron ran perfectly, and the track and weather conditions were ideal. The whole team did a fantastic job,” noted Wallace, who was overjoyed at the accomplishment. 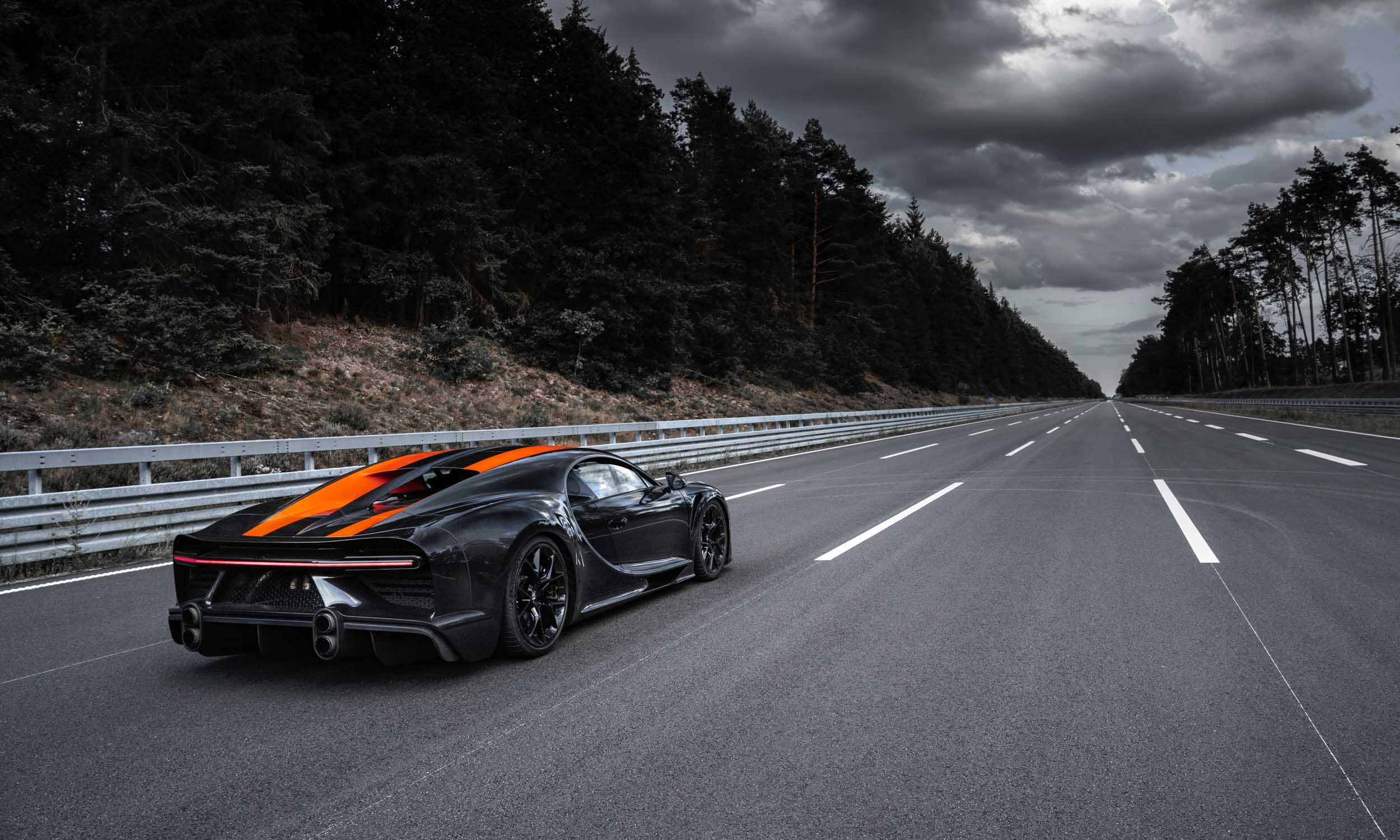 Test Track
This amazing feat of speed took place at the Volkswagen Group test track at Ehra-Lessien in Lower Saxony, Germany. (Bugatti is part of the Volkswagen Group). This track is well-suited to high-speed runs due to its 8.8-km (5.5 mile) straight. In fact, Andy Wallace set a top speed record at this track in 1998 when he achieved 243 mph in the McLaren F1 — a record that stood for more than 10 years. 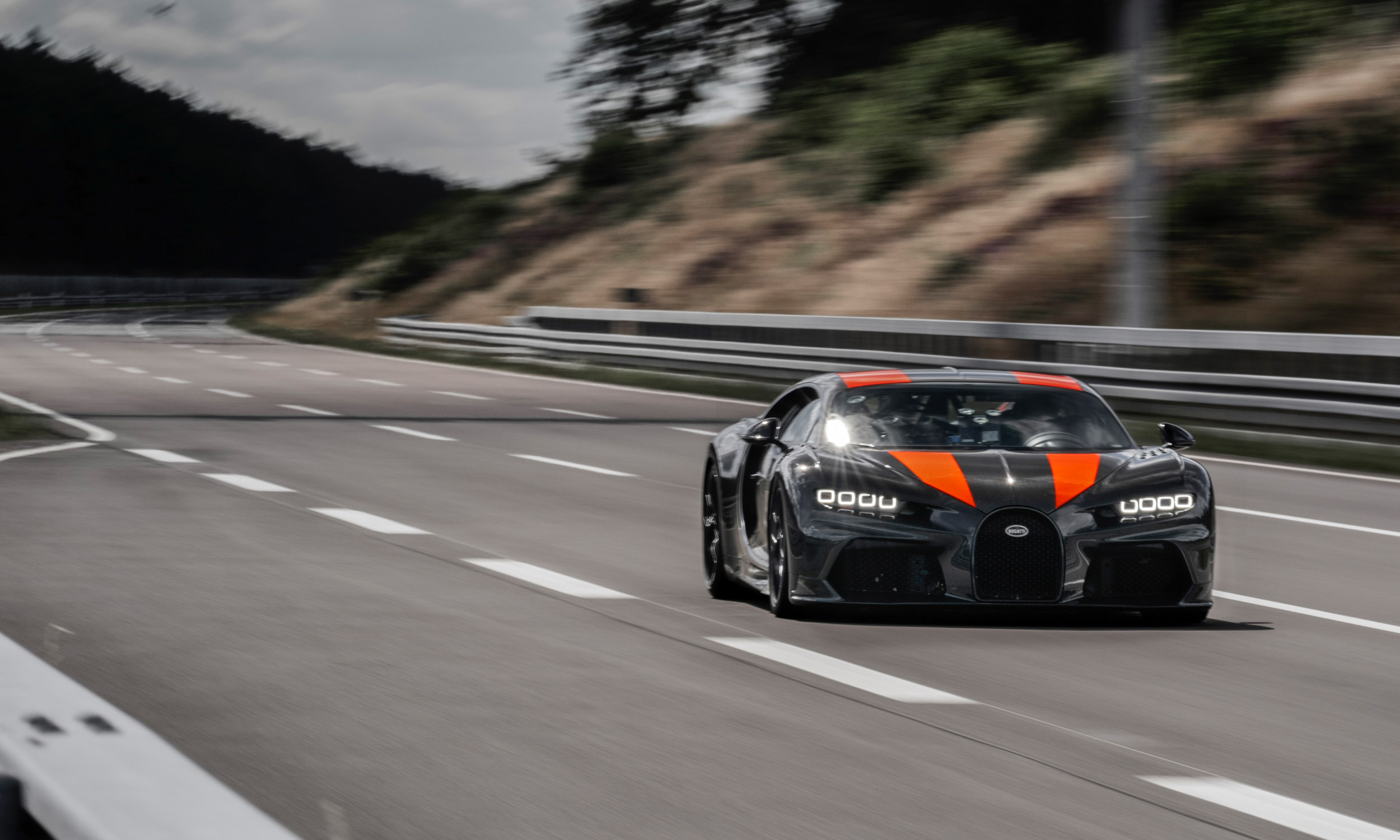 Full Throttle for 70 Seconds
Wallace planned his top-speed run with specific brake and acceleration points for maximum speed. “I went at full throttle from the start for approximately 70 seconds. It was important for me to be out of the bend at 200 km/h in order to reach top speed on the straight. That required the very highest level of concentration,” said Wallace. At top speed, Wallace’s Chiron covered the length of a football field in less than one second. 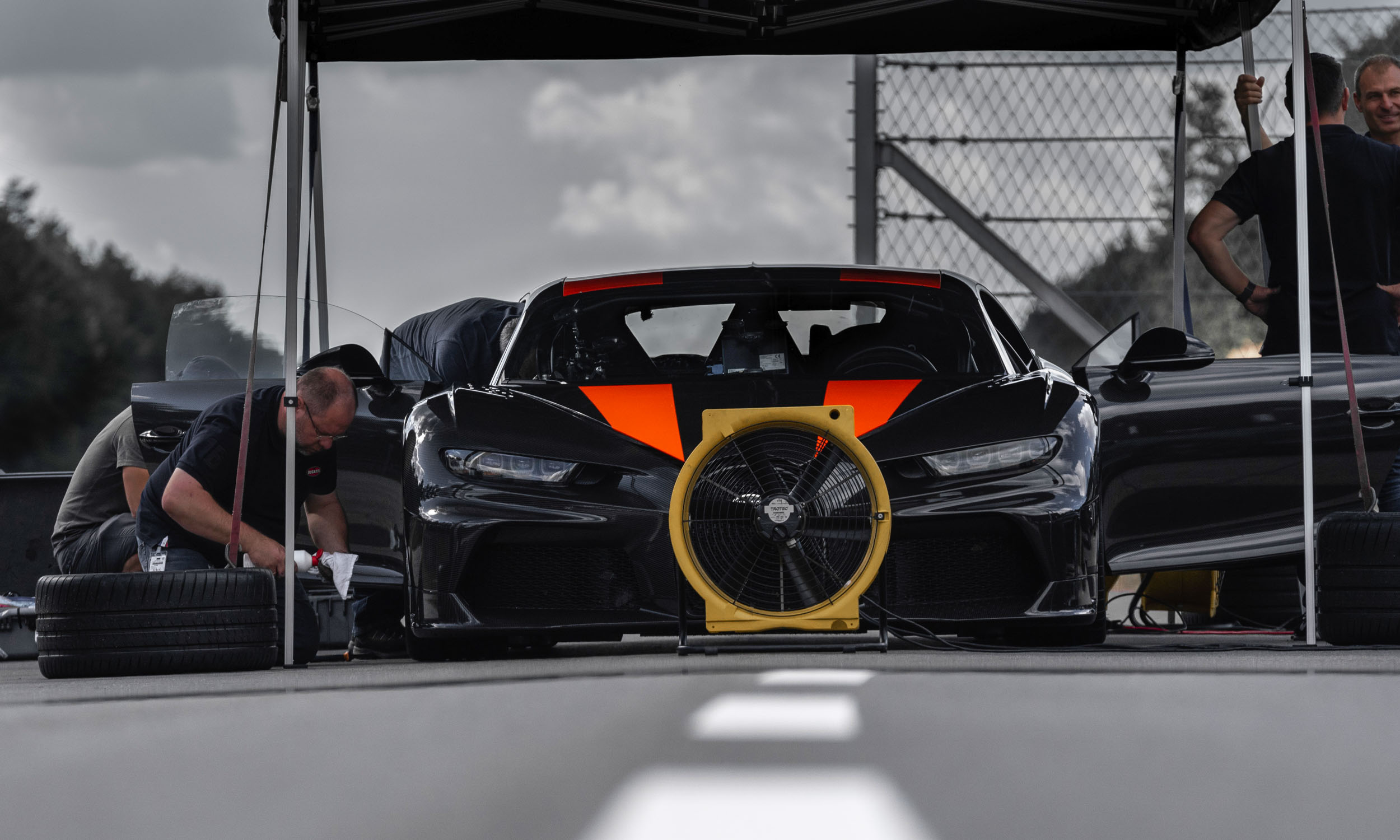 Built for Speed
This record-setting Chiron was specially prepared with aerodynamic improvements, an additional safety cell and 6-point seat belts. Michelin supplied the tires, employing the Chiron’s bespoke rubber with some added reinforcements, all the while keeping them street legal. The run was recorded by a sealed GPS box; the certificate issued by SGS-TÜV Saar. 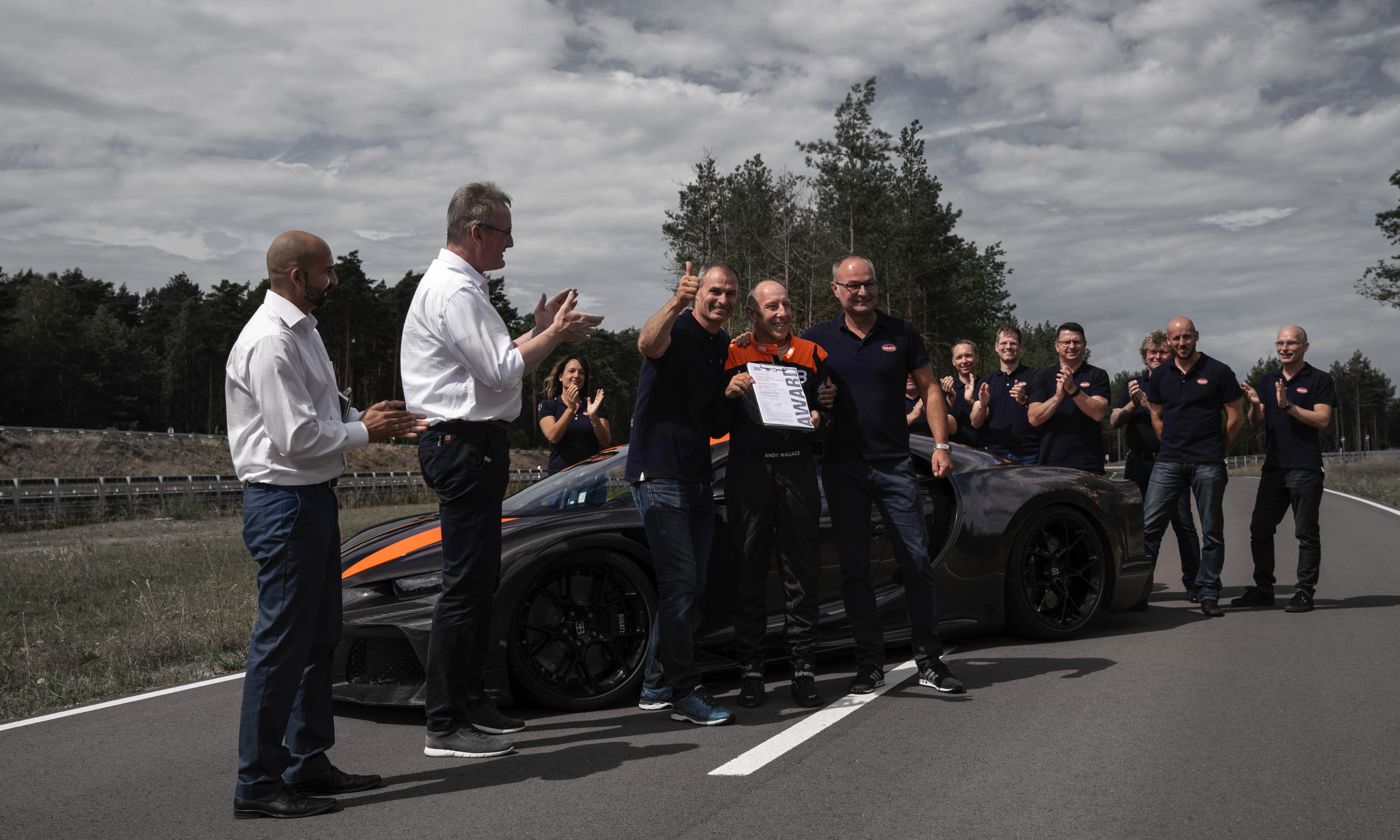 Mission Accomplished
According to Winkelmann, Bugatti no longer needs to try to build that world’s fastest cars. “Now Bugatti was the first to exceed the 300-mile-per-hour mark. An incredible achievement that shows what the men and women of Bugatti are capable of. But this was the last time for us. Bugatti was the first to exceed 300-mile-per-hour — its name will go down in the history books and it will stay that way forever,” noted a contented Winkelmann. 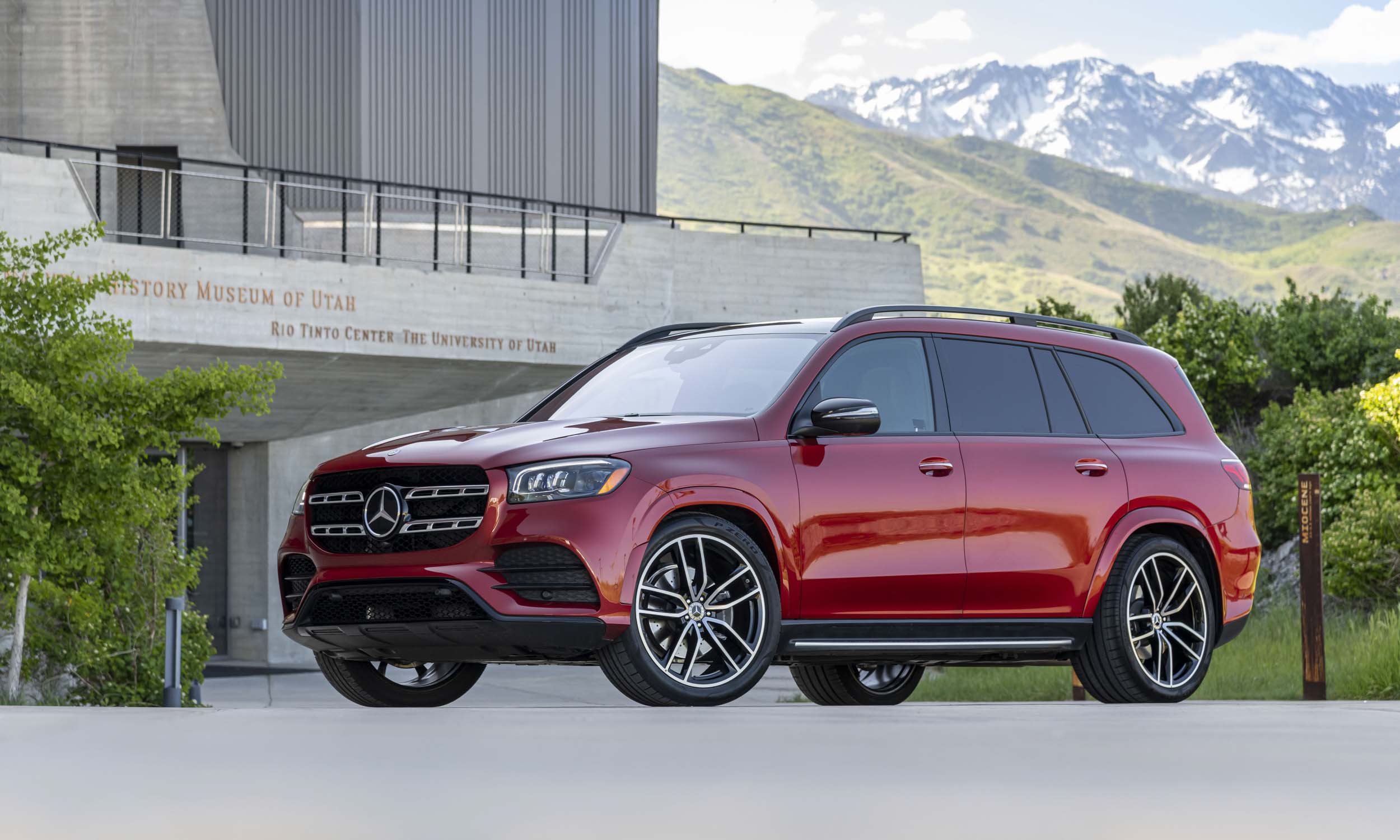 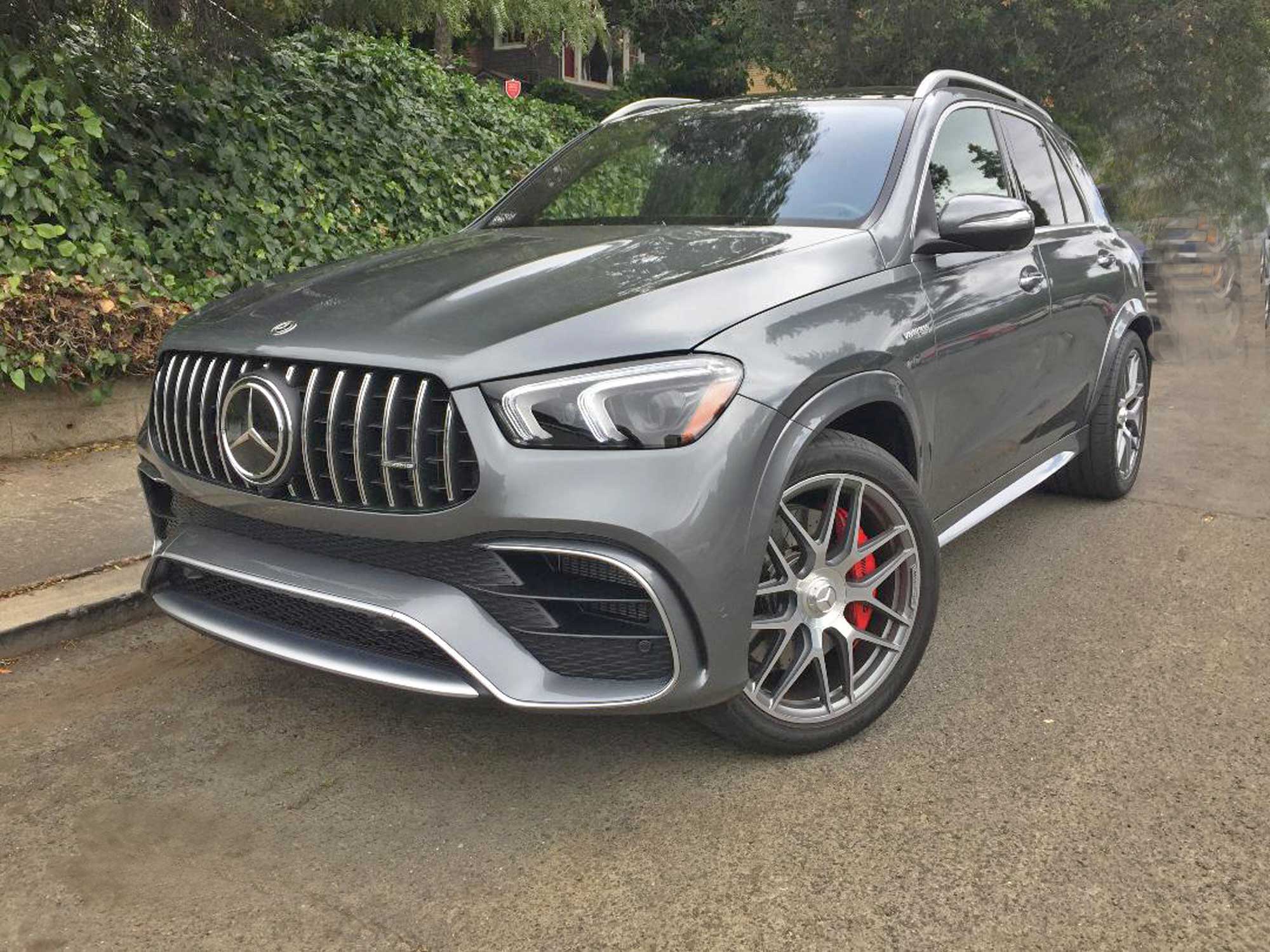