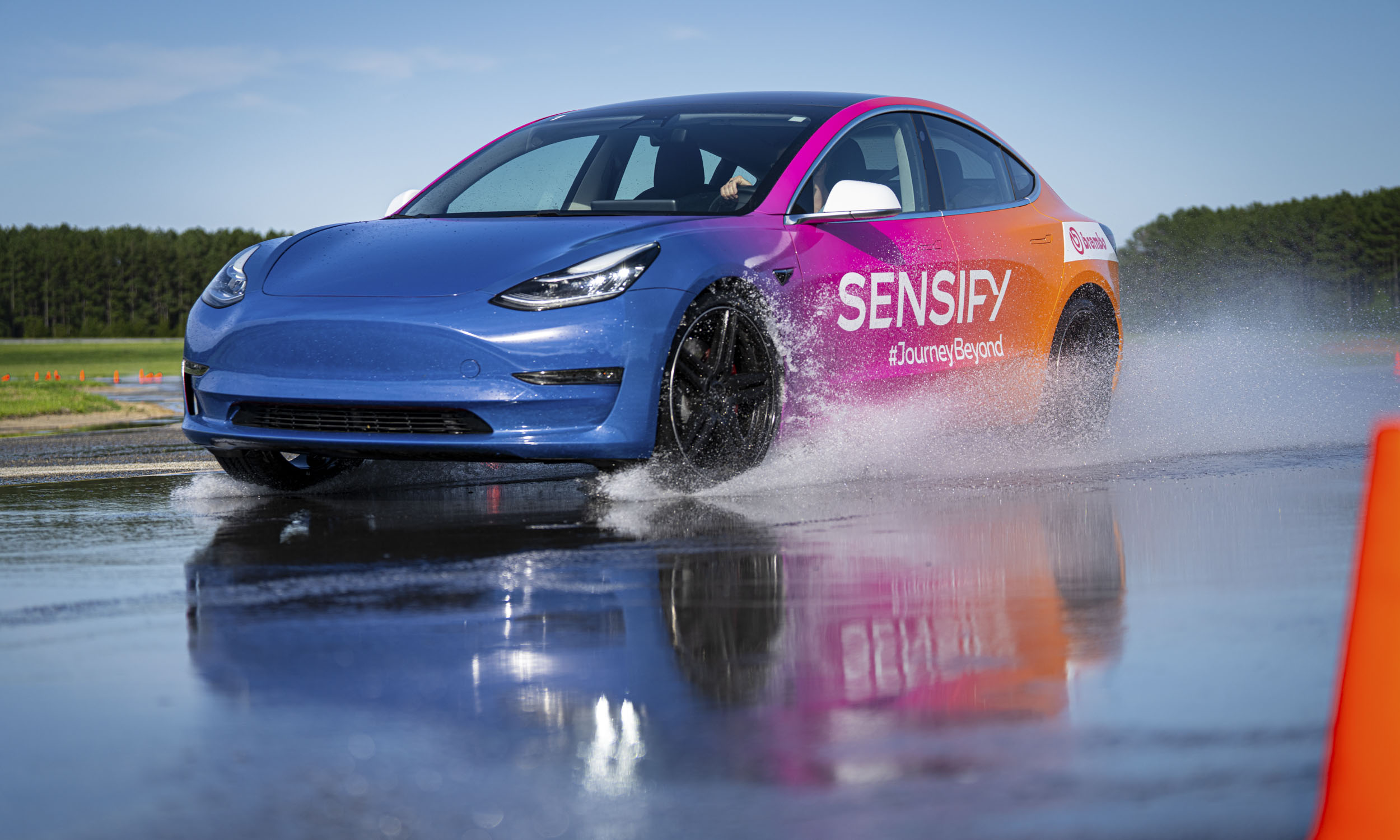 Brembo Brakes
Take a peek through the open spokes of a majority of exclusive, high performance sports cars and you will often see colored brake calipers and huge, silver brake rotors. Sure, Ferraris and Porsches are best known for their sexy looks and high horsepower, but they also need high-performance brakes to harness all that generated energy. Who makes those colorful calipers? Italian manufacturer Brembo has been producing high-performance brakes for sports cars and racing applications since 1961. But Brembo is also a major supplier of brake components to the automotive industry, and the company is introducing a new system — called Sensify — that advances ABS brake systems with digital technology. 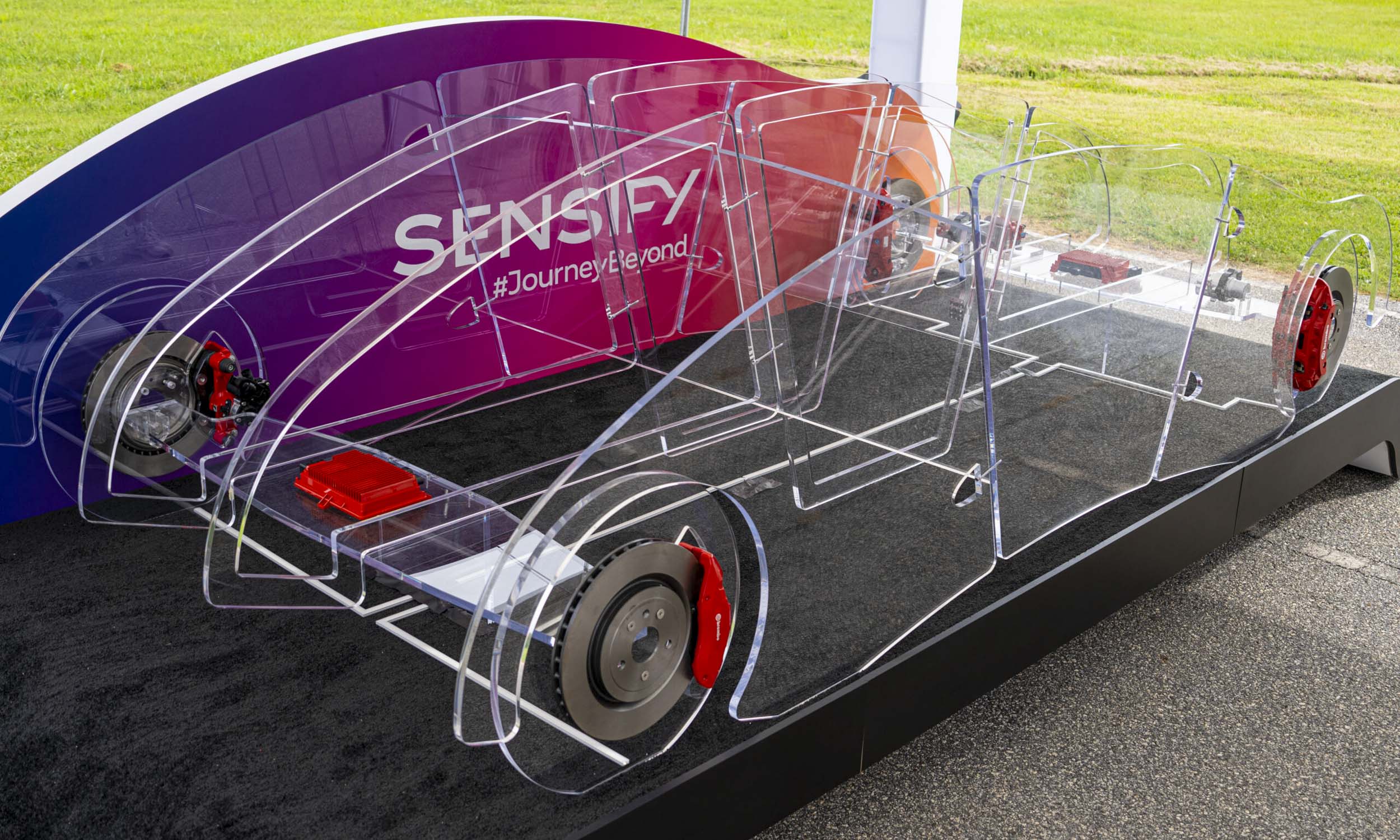 Brembo Sensify
Sensify combines Brembo’s brake components with a central digital brain and sensors, so the key to Brembo Sensify is its technology. The new system allows independent control of the brake at each wheel utilizing software, data and artificial intelligence to manage each brake more precisely for current conditions. While today’s brake technology utilizes a central master cylinder and booster that deliver hydraulic pressure to all four brakes, Brembo Sensify has a separate system for each individual brake, controlled electronically. 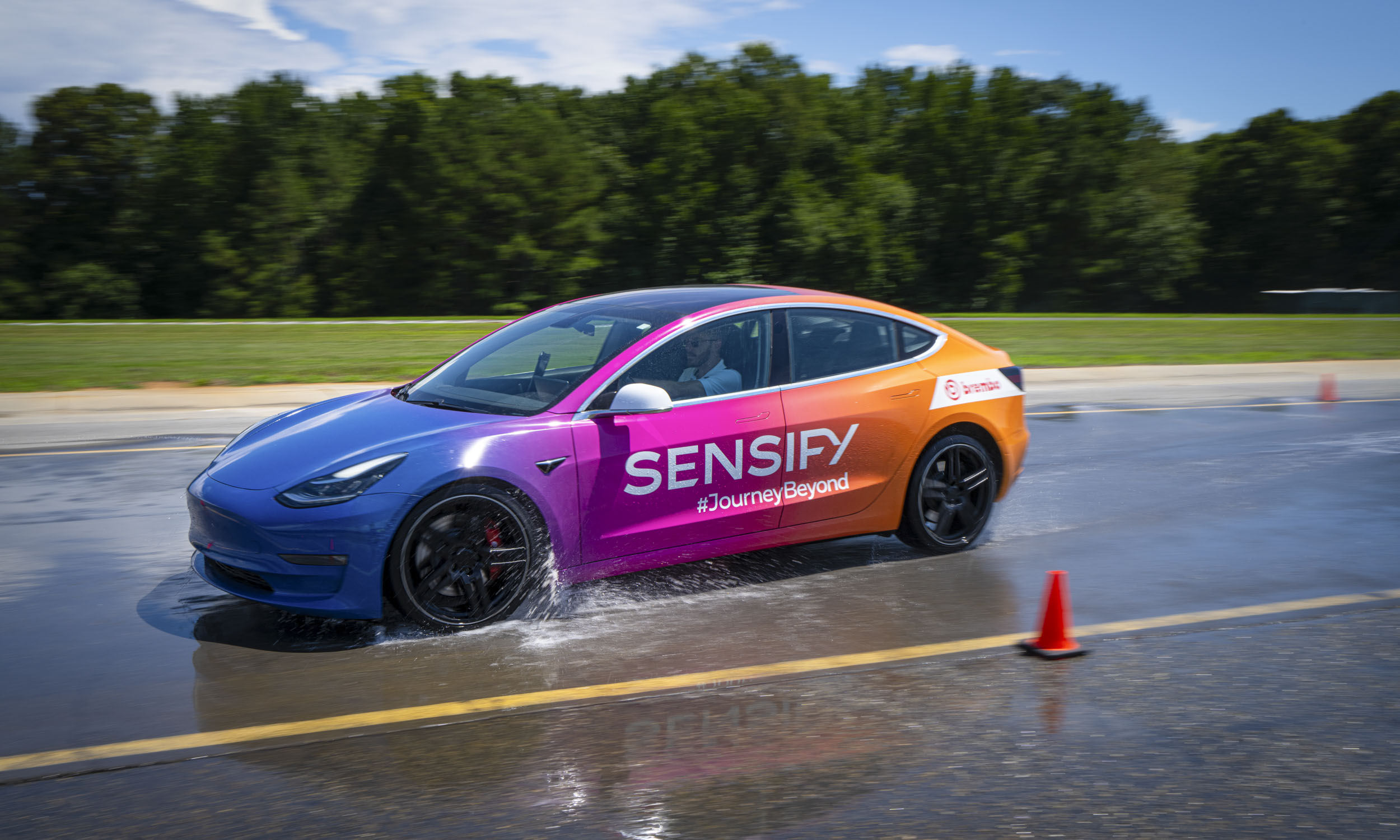 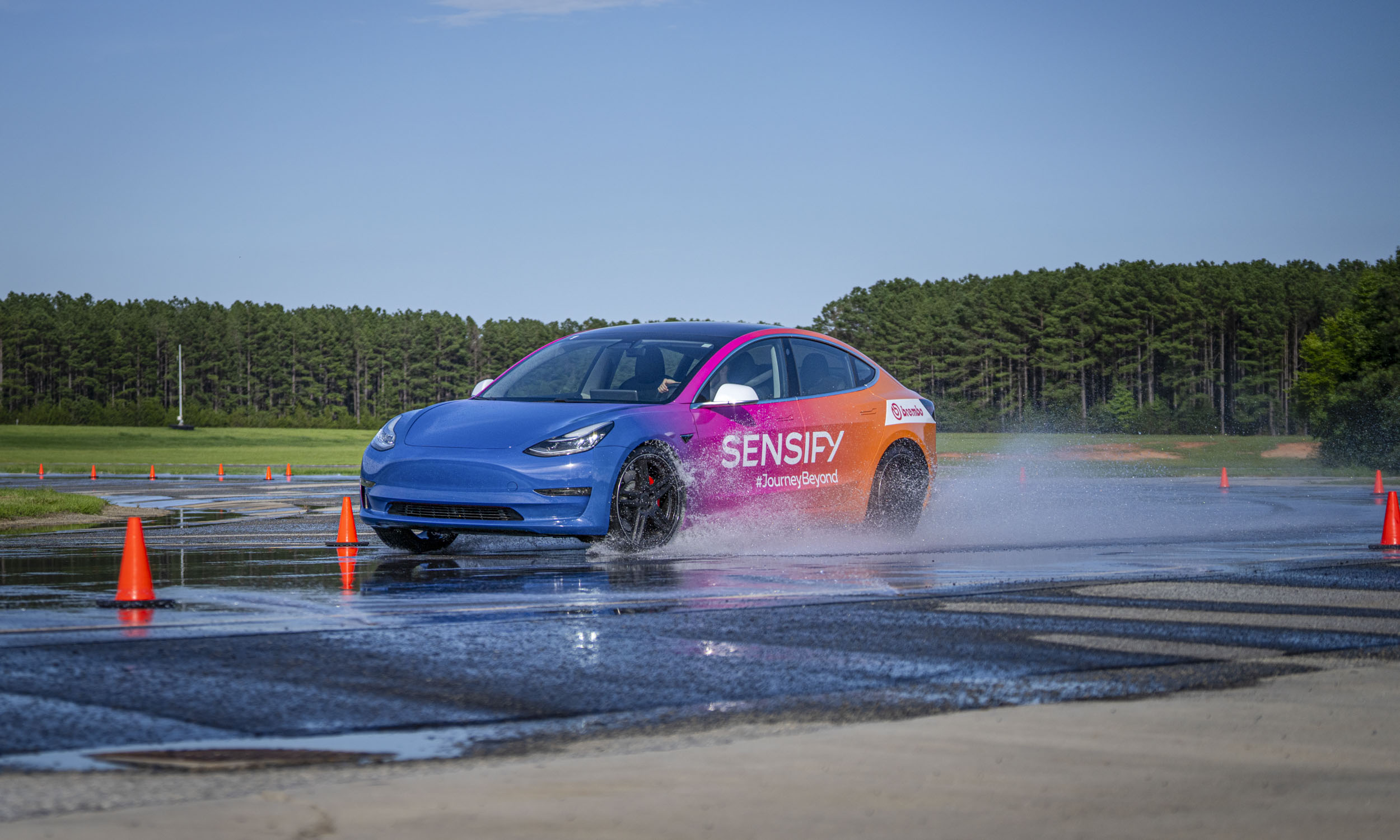 Precise Control
The new Brembo Sensify system allows precise control of all four brakes independently, so during a full ABS stop the experience is smoother, quieter and more controlled than current production brakes. The difference is so dramatic that during our brake testing the events didn’t even feel as if the ABS had activated to assist the stop. After cycling through a full series of braking situations, it became obvious that Brembo’s new system is a revolutionary change in brake technology. The new Brembo Sensify system is markedly smoother and quieter, and thus a completely different experience for driver and passengers. 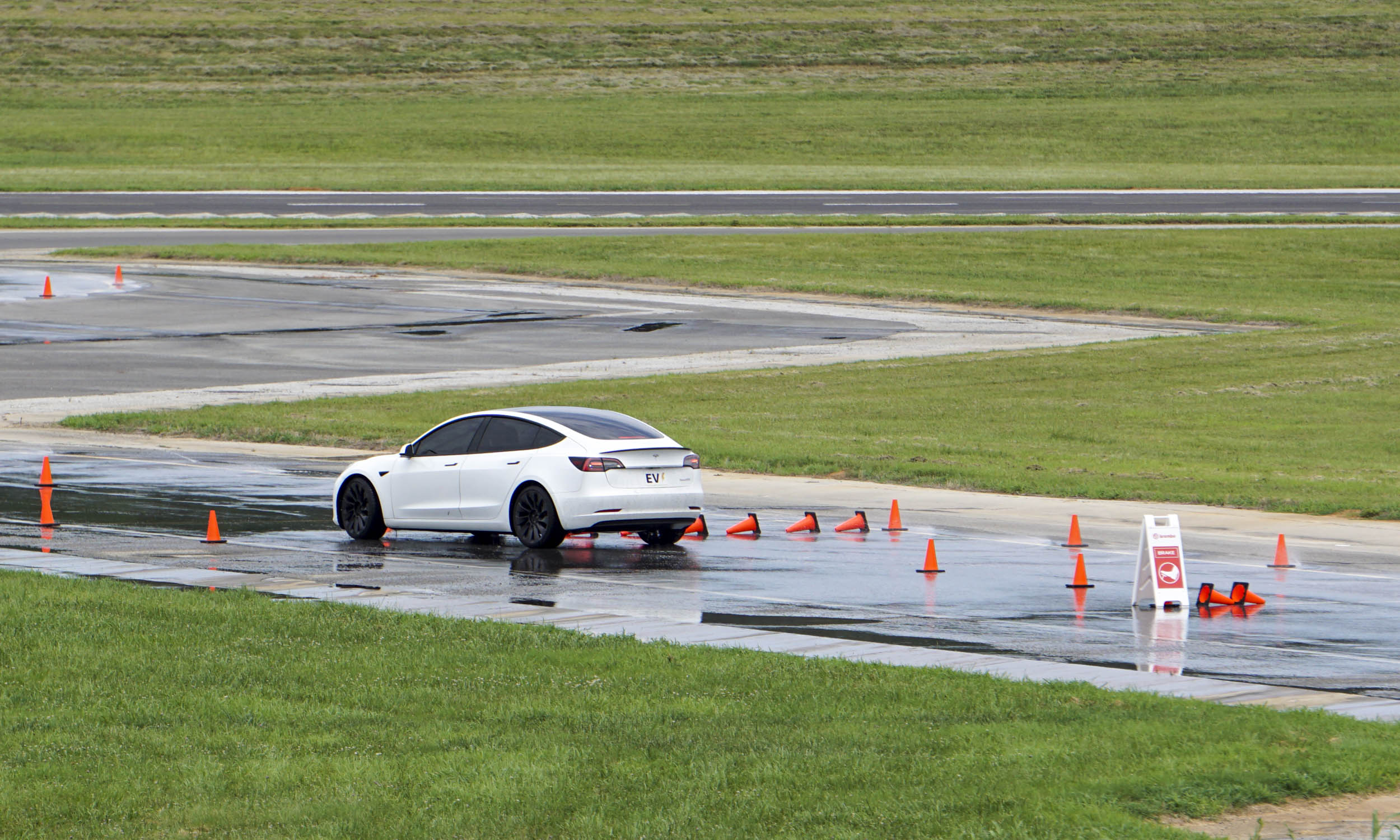 How Typical ABS Works
Over the past three decades, ABS brakes have evolved and today’s systems are incredibly good at helping vehicles stop vehicles in short distances. With standard ABS, the brake rotor turns with the wheel and tire, and when pressure is applied to the brake caliper it presses brake pads against the rotor to create friction that slows the turning rotor and therefore slows the car. If too much pressure gets applied the rotor will stop, locking the wheel and tire and causing the tire to slide across the road surface. Since a sliding tire is less efficient, if the rotor locks the ABS system will release pressure to let the rotor / wheel / tire turn again to improve braking efficiency. 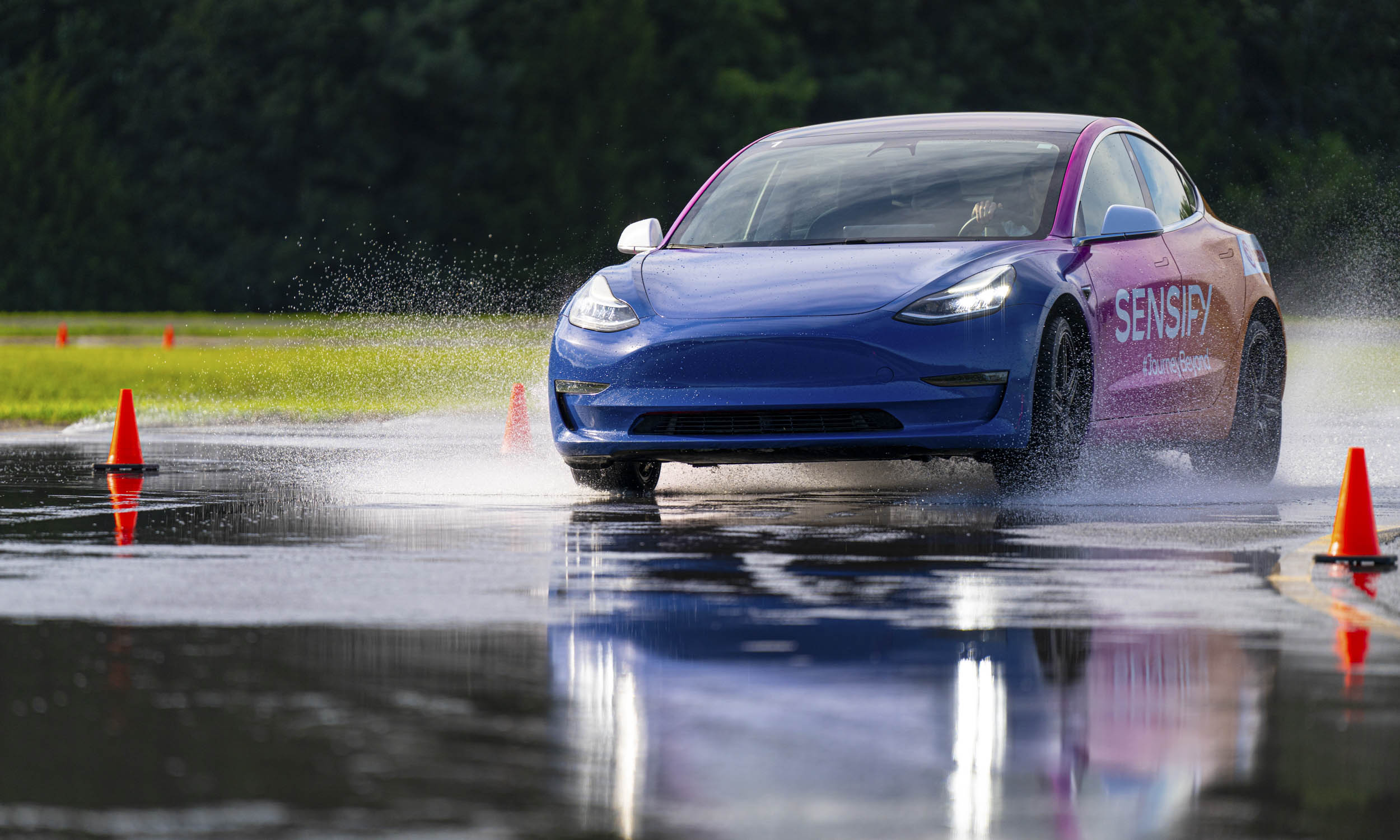 The Key to ABS Effectiveness
Today’s ABS systems essentially allow a series of very small, rapid lockups and releases to keep the tire rotating at the limits of adhesion. Brembo Sensify is able to control each of the four brakes independently and more precisely to eliminate or minimize the lockups, resulting in a smoother and more controlled stop. The system utilizes data and precise control to keep the tires at the threshold of lockup rather than locking up and releasing, which causes the brake pedal pulsation and noise that can be so disconcerting to drivers, to the point that some mistakenly remove their foot from the pedal, thus interrupting the braking and potentially losing control of the situation. 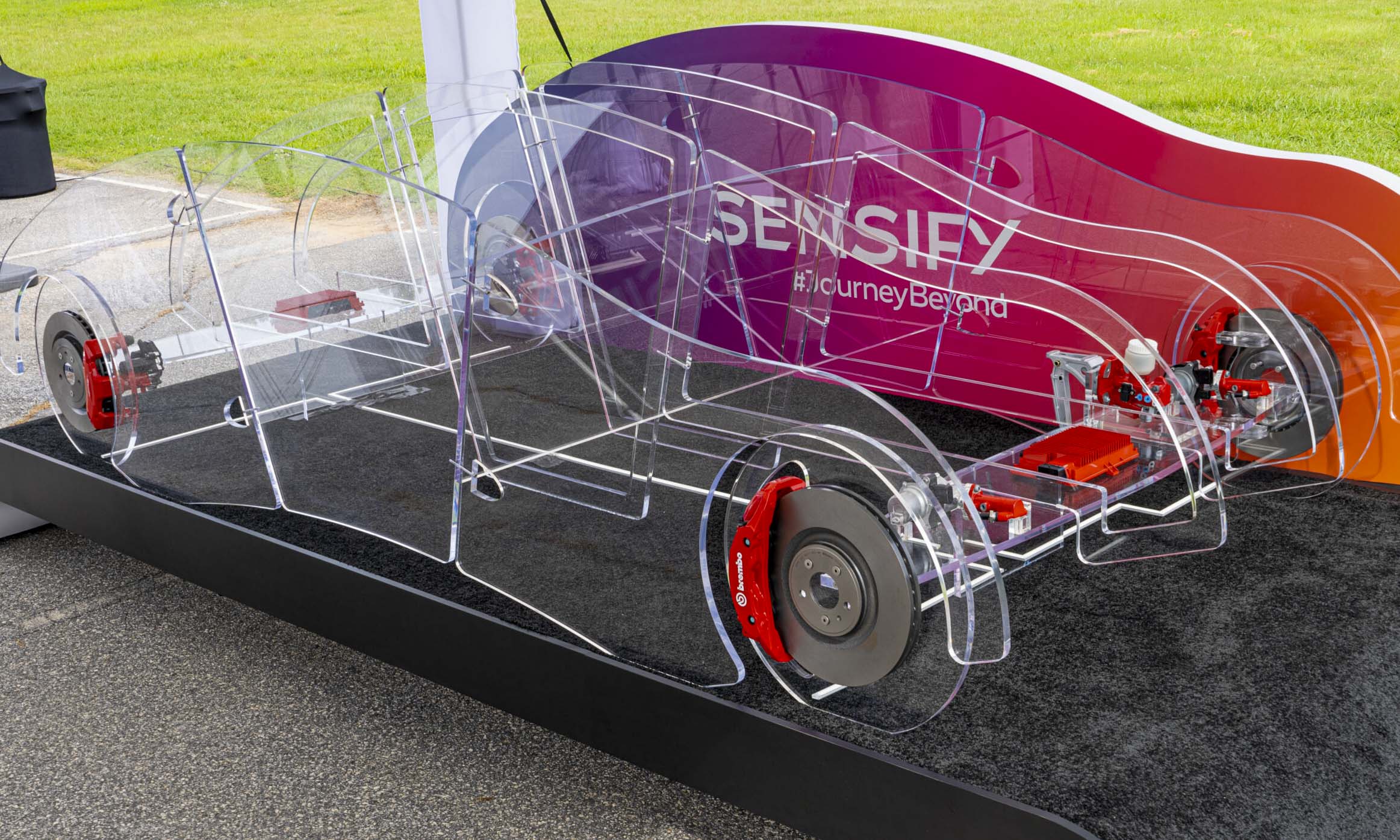 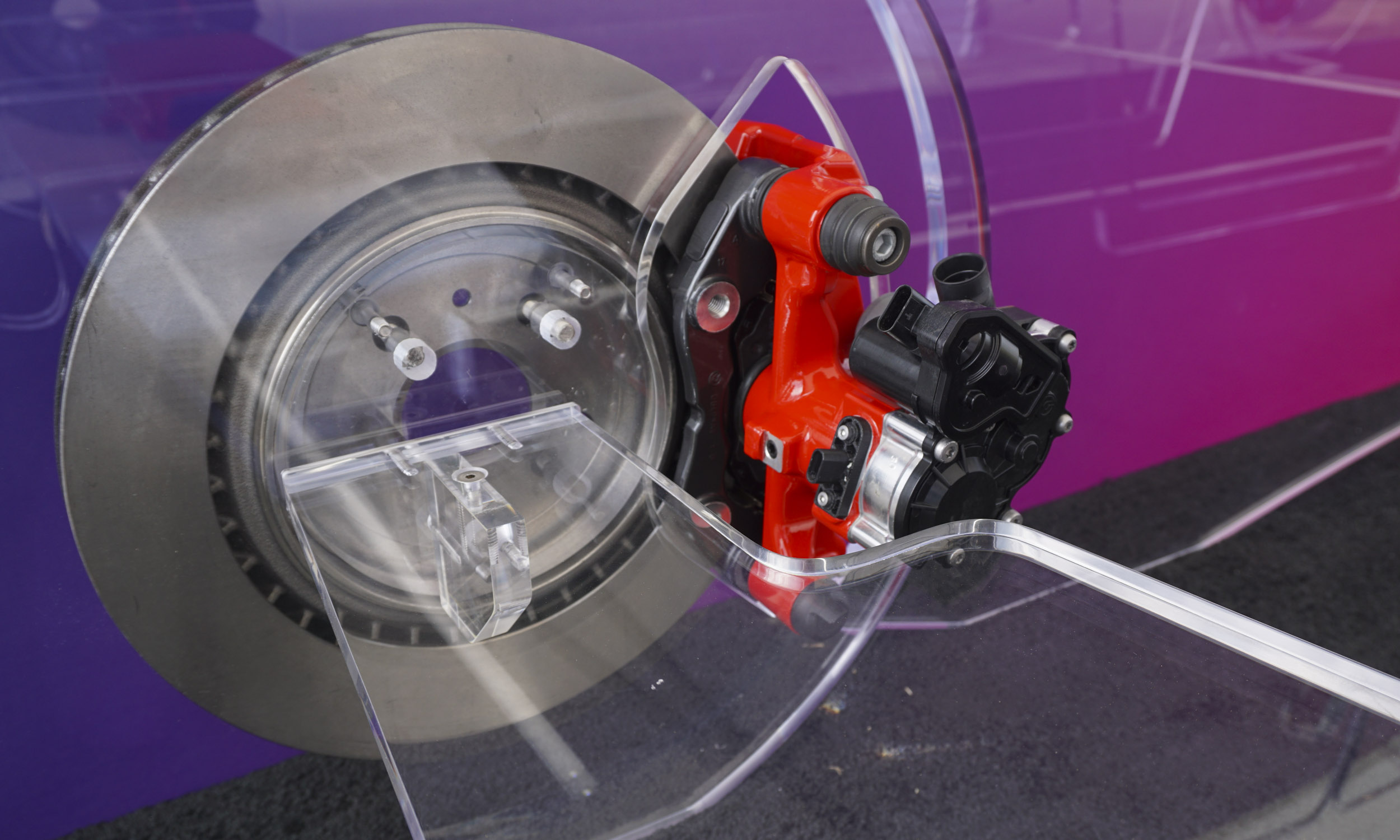 Electromechanical Calipers
The electromechanical calipers incorporate an electric motor with the caliper to squeeze the pads against the rotor, offering precise control for optimum performance. The downside is that the electric motor adds unsprung weight, which can have a negative impact on performance and handling. As the Sensify system gets adopted across vehicle platforms, it will be interesting to see how Brembo and auto manufacturers choose to integrate electromechanical calipers with hydraulic calipers, and what combinations are best for different applications. 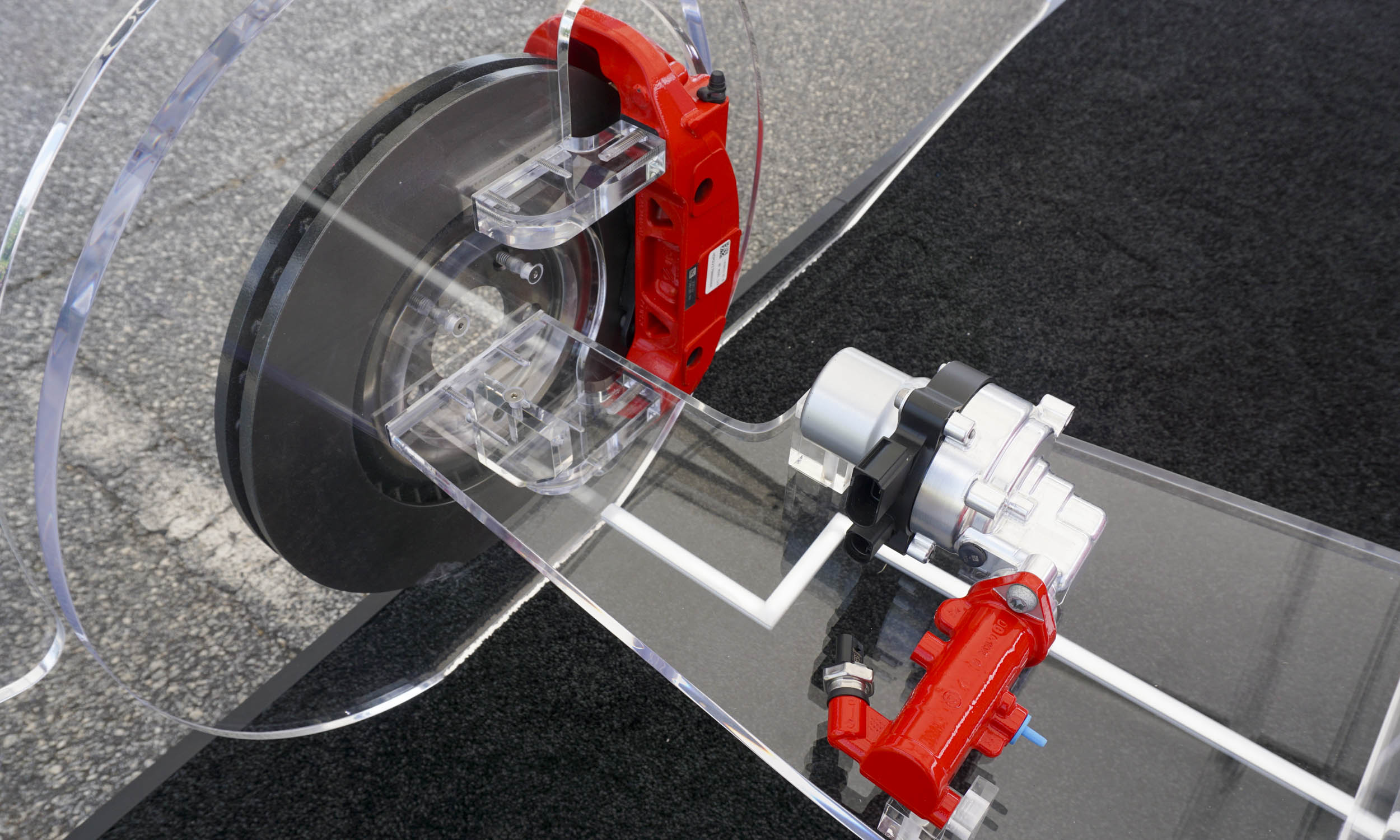 Hydraulic Calipers
Unlike electromechanical brake calipers, the advantage of hydraulic calipers is the lack of additional unsprung weight, and the closed hydraulic system operates close to the caliper. For high-performance applications, lightweight aluminum calipers and rotors can be optimized for cooling and thermal efficiency. Brembo has been working on lightweight, efficient applications for decades, so the hydraulic systems will continue to advance the technology while taking advantage of Sensify technology to create even more robust systems. 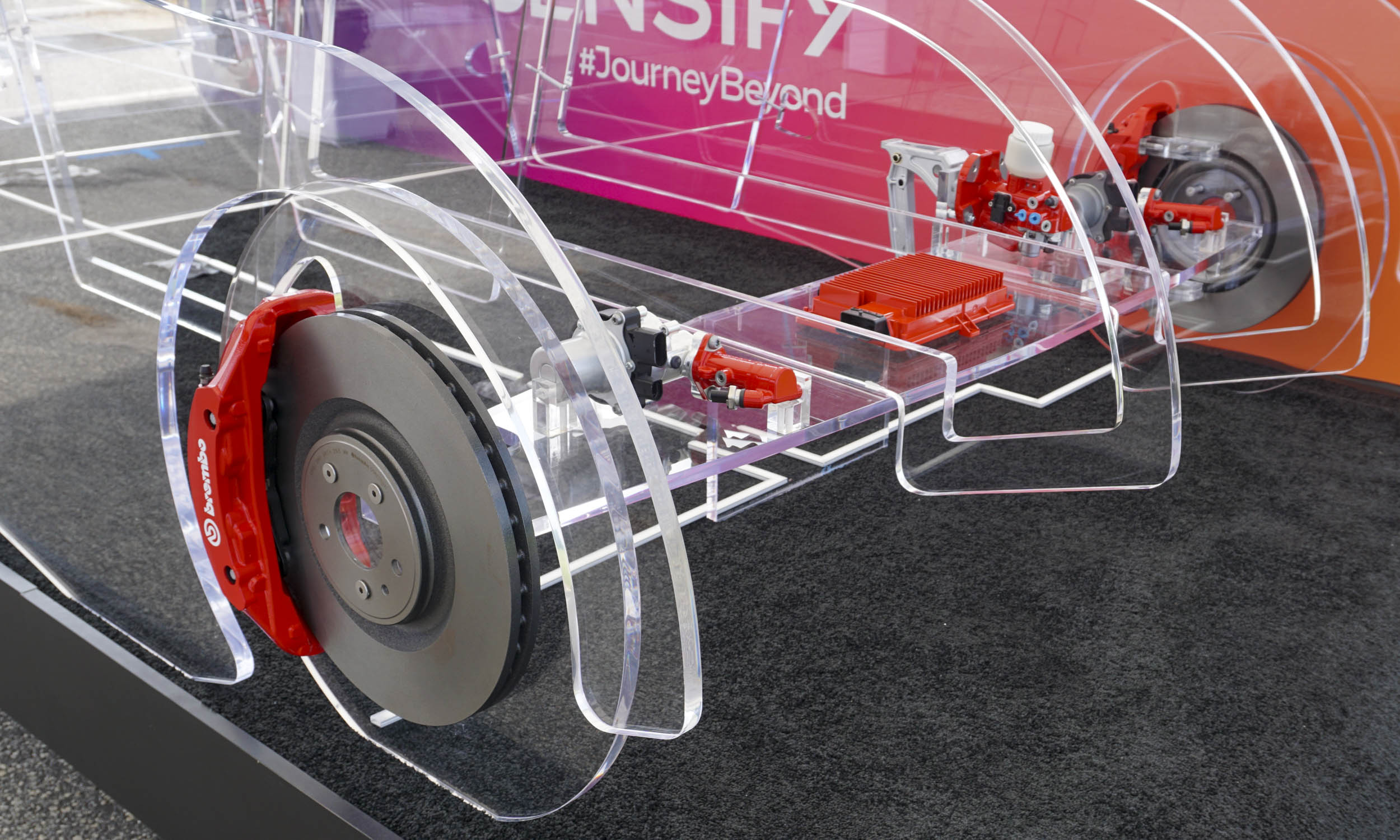 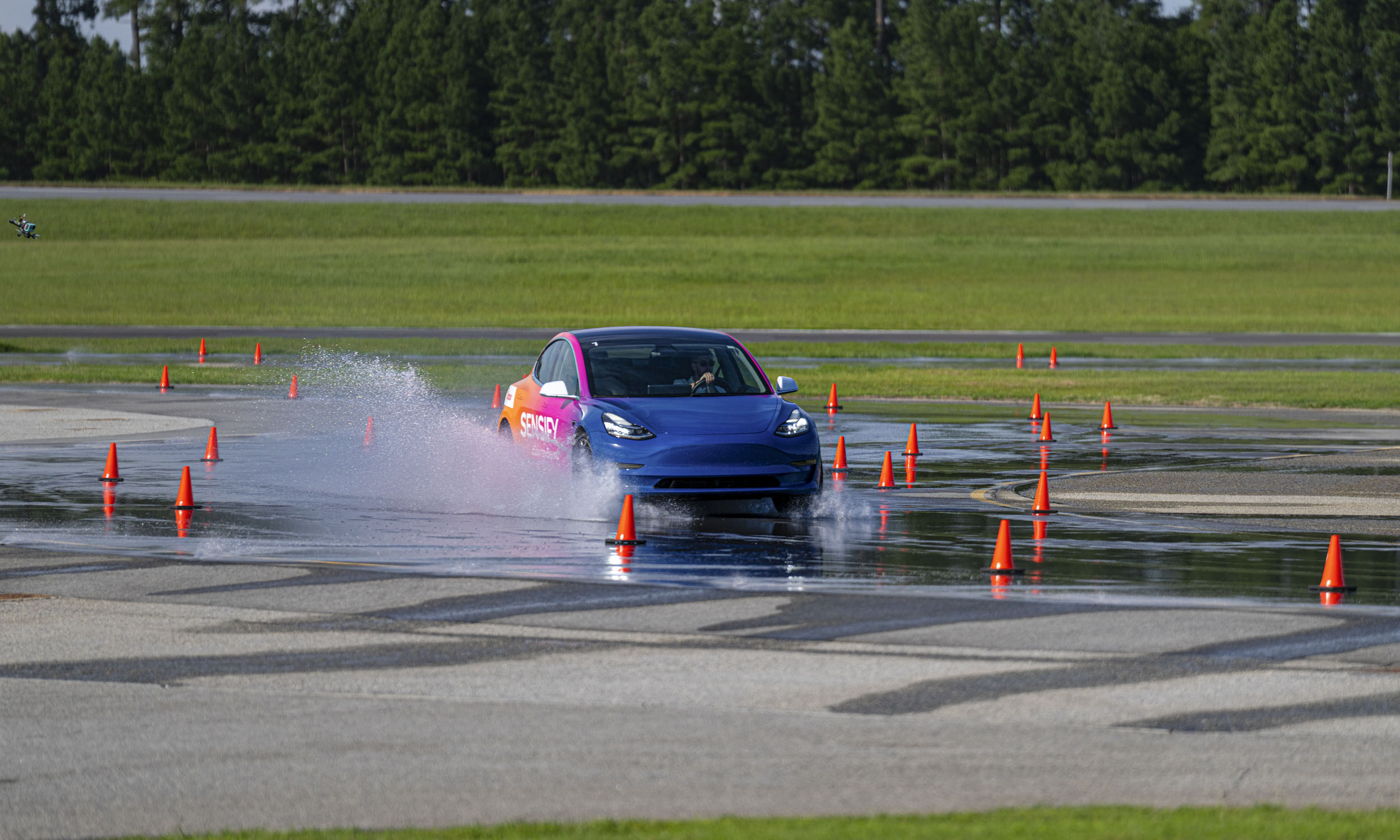 Michelin Laurens Proving Grounds
We had the opportunity to travel to the Michelin Laurens Proving Grounds in South Carolina where Brembo held the Sensify testing event, including straight-line braking, braking in a corner, dry surface, wet surface and ABS obstacle avoidance maneuvers. In each test the Brembo Sensify performed smoother, quieter and gave drivers more control, which put participating drivers more at ease during intense braking situations. While braking within a corner, the Sensify-equipped car followed a more consistent line without as many adjustments, and during obstacle avoidance maneuvers were easier because the car acts in a more stable, controlled manner. 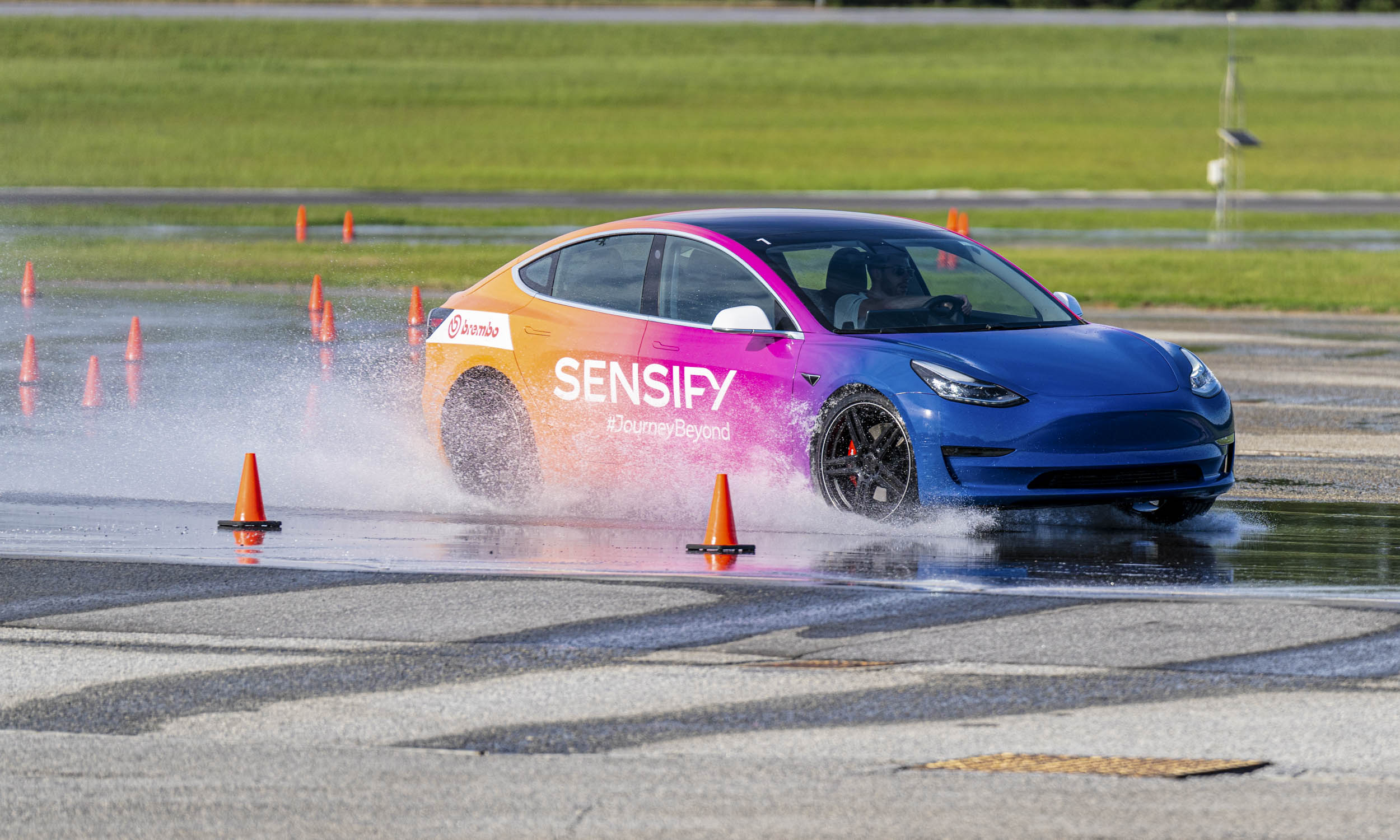 Better Driver Experience
Most drivers rarely experience ABS braking, but when they do it is in mainly in wet or winter driving conditions, so when the system does kick in it may be disconcerted. With current ABS systems, the brake pedal pulses and the driver hears noise from the locking and releasing of the brakes, which as mentioned previously may cause some to feel as if something is wrong and even react by easing off the pedal. With Brembo Sensify, drivers will likely be more comfortable using maximum braking capability when needed. Although Brembo does not claim that Sensify stops in a shorter distance, we would not be surprised to see that result as development continues. 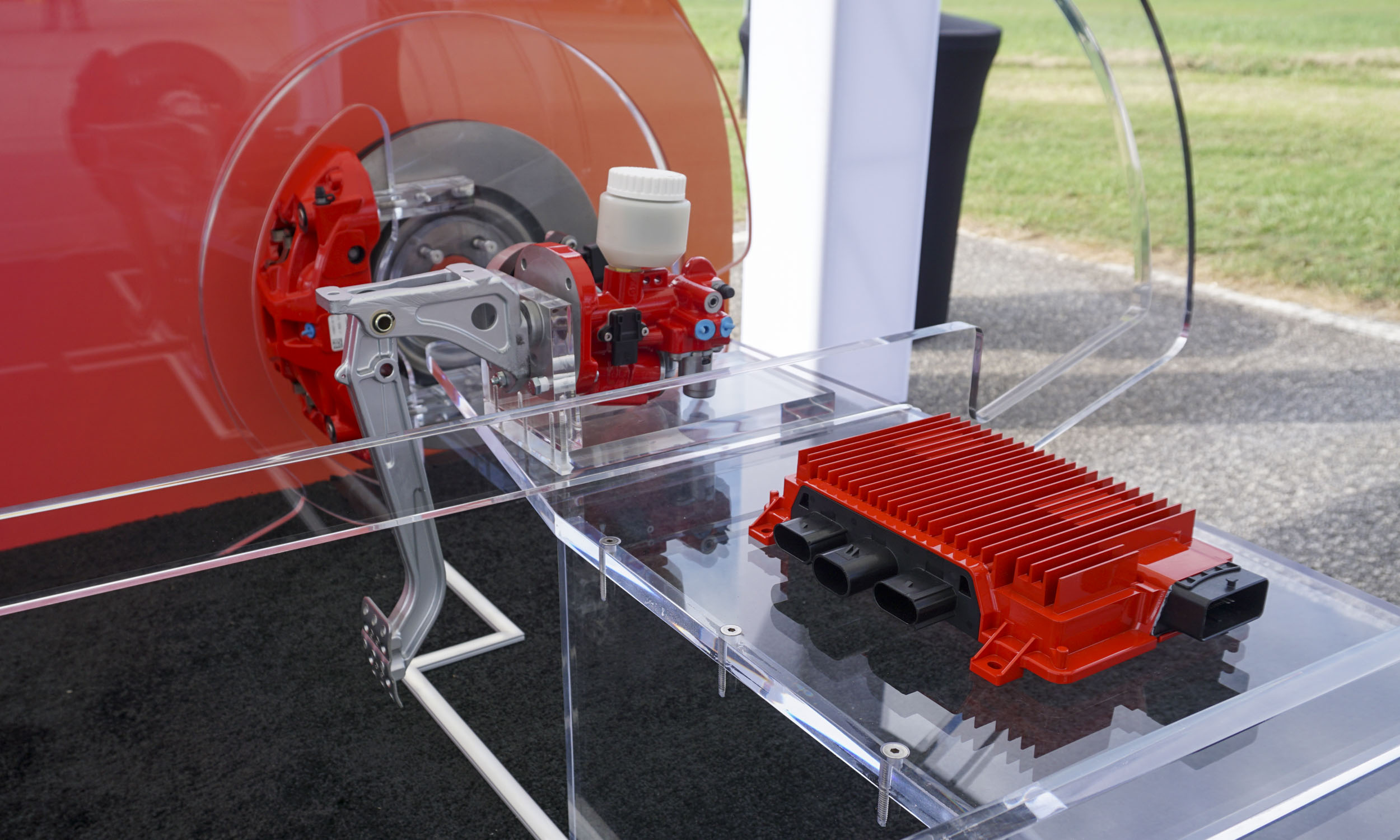 Customized Brake Pedal
The Brembo Sensify system also allows drivers to customize the feeling of the brake pedal. Many vehicles offer a Drive Mode selection to customize elements such as accelerator response, transmission response, steering feedback and suspension; with Sensify brake pedal feel can be added to that list. During testing we experienced three pedal settings: Normal, Comfort and Sport. Normal feels how a vehicle such as the Tesla Model 3 Performance would normally function, with solid feedback and progressive response. Comfort feels much more progressive and requires extra pedal travel, while Sport is very aggressive and requires a soft touch for smooth brake application. 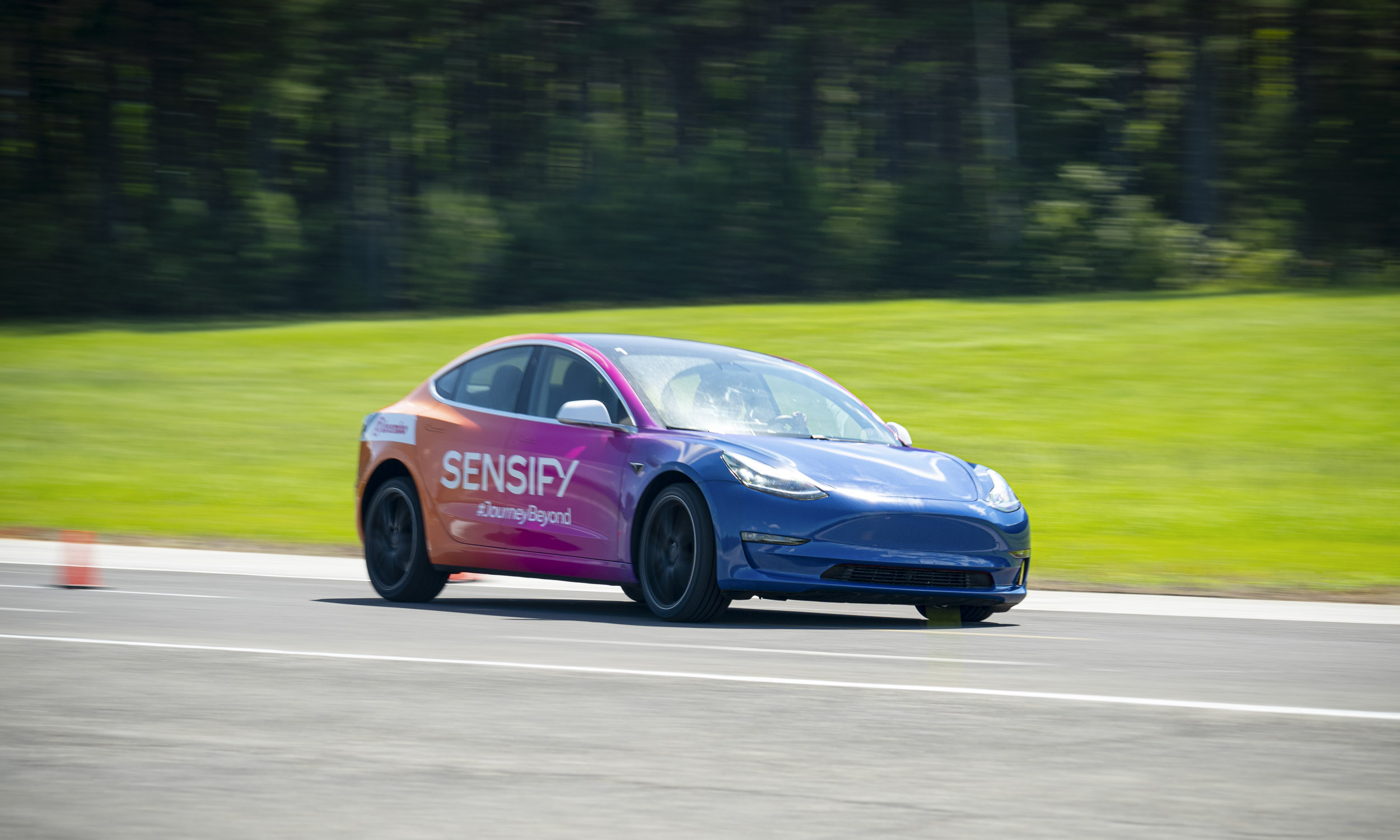 Automatic Emergency Braking
We also experienced the Sensify system during a full stop with automatic emergency braking. A Brembo engineer triggered the Sensify system without the driver touching the brake pedal. Even with prior warning, it was remarkable to experience how quickly the system goes to full-ABS braking — certainly much quicker than a human could react to the brake pedal. 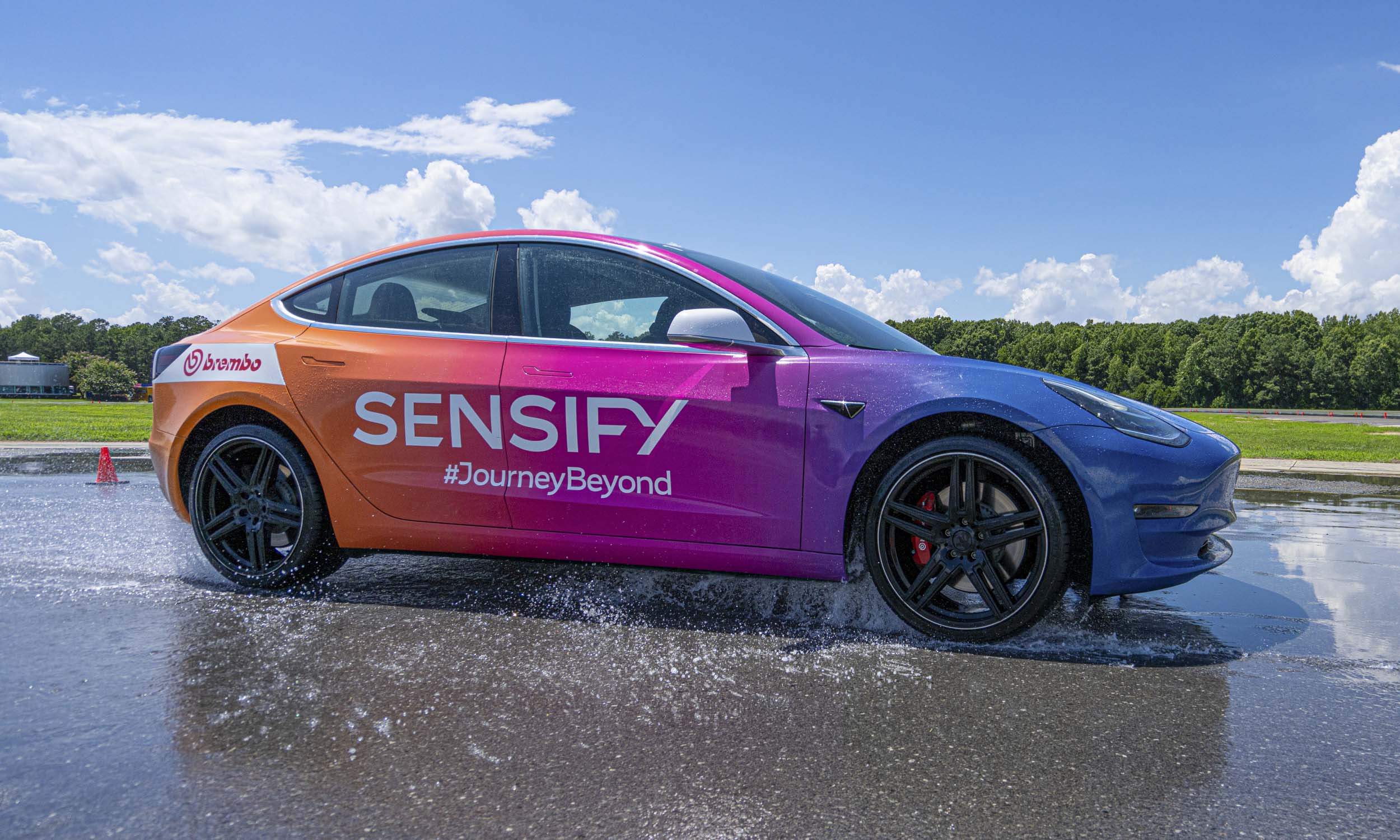 On-Sale Date
Brembo expects Sensify to be on the market in 2024. Although reps at the event did not disclose which vehicles or manufacturers would be adopting Sensify technology, they did say they have interest from a number of automaker partners. When Sensify does finally come to market it will be interesting to see if it is only offered on high-end models, or how quickly it will scale to be available on more mainstream vehicles. Sensify is certainly a revolutionary development in brake technology — one that drivers will appreciate for the increased sense of confidence in extreme situations. 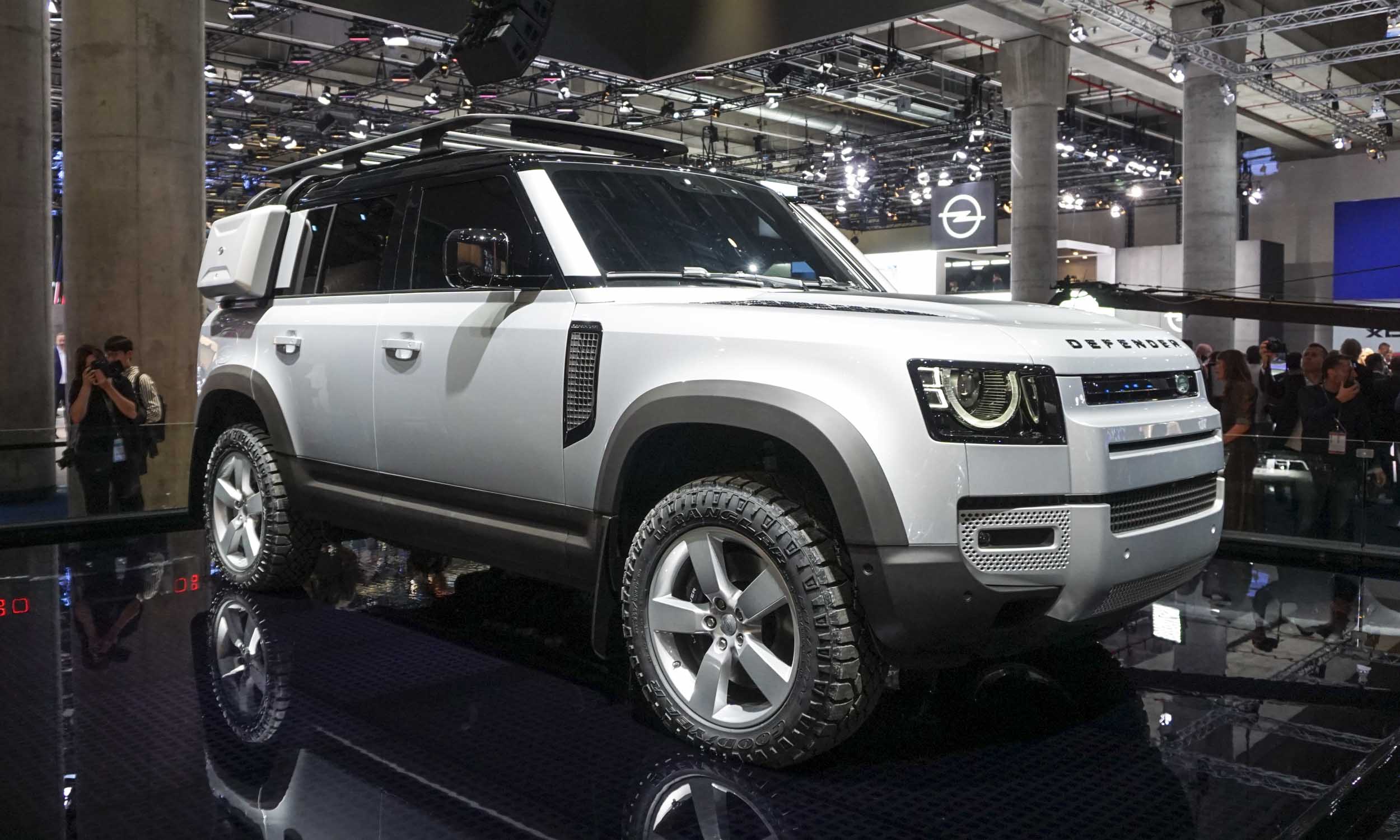 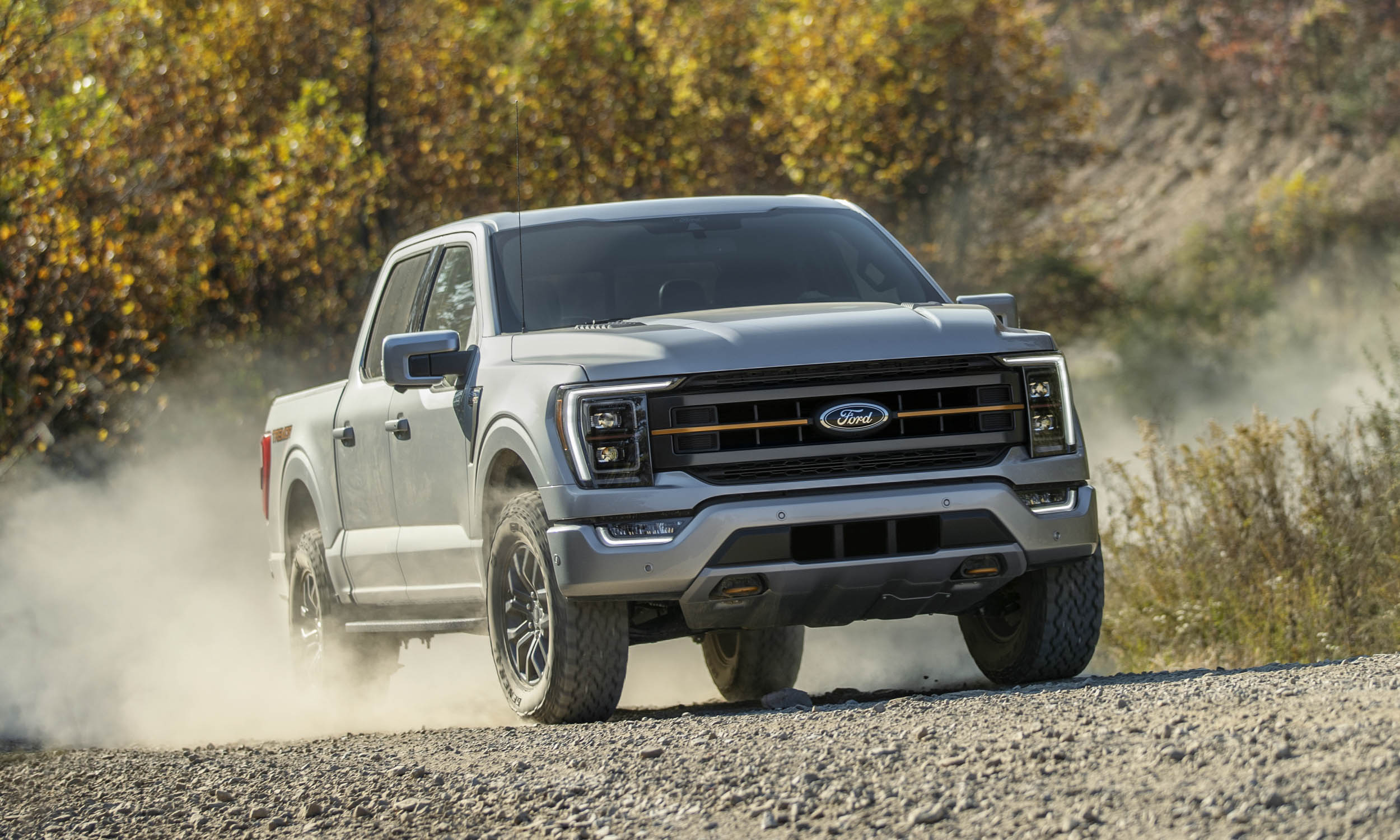