McQueen’s Machines: The Cars and Bikes of a Hollywood Icon 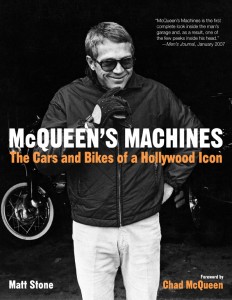 It?s been 30 years since the untimely death of Steve McQueen.? From every perspective, McQueen was cool, but the cars that he owned and drove were some of the coolest and most sought after.

Any McQueen fan remembers the ?Bullitt? chase scene, the Rolls Royce Silver Shadow in the ?The Thomas Crown Affair?, the flying Triumph motorcycle in the ?The Great Escape? and the Porsche 917K he pilots to more than 200 mph in ?LeMans?.

?McQueen?s Machines? offers behind-the-screen stories from McQueen?s family as well as unpublished photos of cars and motorcycles he drove in his movies, raced and owned. ?There is also extensive information about the legend?s career and life.? The forward is written by McQueen?s son Chad.

The large format 176-page paperback book includes 219 color photos and many other photos in black and white.? The $19.99 book is available at QBookshop.com, Amazon.com, Borders, Barnes & Noble.