?Vettes Made Famous on Track and Screen? 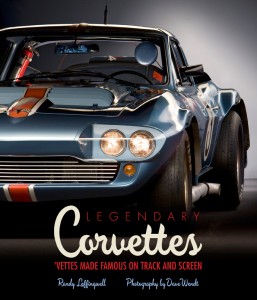 As the icon of American sports cars, the Chevrolet Corvette has captured the heart and imaginations of car enthusiasts everywhere and author Randy Leffingwell has captured the essence of the Corvette with his new book, Legendary Corvettes – ?Vettes Made Famous on Track and Screen.

From racetracks to the big screen to the television sets of the world, Leffingwell and photographer Dave Wendt show how the Corvette has maintained its iconic status.?? They show 18 of the most legendary Corvettes of all time from the earliest surviving ?Vette built as a 1953 model through the famous Route 66 television show car up to the latest racing Corvettes.

Five Grand Sport racers built by the Godfather of Corvettes, Zora Arkus-Duntov are documented along with the fifth generation Corvette raced by the Earnhardt?s.

A Motorbooks best-selling author, Leffingwell has written more than two dozen books on topics ranging for tractors to motorcycles and cars to barns.

The 176-page hardcover Legendary Corvettes book is illustrated with 130 color and 13 black and white photos.? It?s available at Motorbooks.com, Amazon.com and at most major bookstores.? For more information or to order go to www.qbookshop.com.