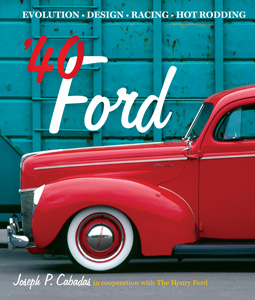 ? ? ? ? ? Chapter one of Joseph Cabadas? new book, ?40 Ford: Evolution ? Design ? Racing ? Hot Rodding begins, ?The 1940 Ford represents the last of a generation of fairly compact, speedy cars that started with the 1934 Ford.? Under the hood was the highly successful flathead V-8 engine that came in a 85 horsepower version, the V-8-85, or the smaller 60 horsepower ?economy? size called the V-8-60.? The cars were simply and appropriately known as the V-8s and came in a variety of body styles from two-door coupes and sedans to the four-door sedan or the ?woody? Station Wagon.?

Much more than a book about the ?Fabulous 40 Ford? as it was called in advertising, Cabadas? book is a historical document developed from the archives of The Henry Ford in Dearborn, Mich.? It tells the story of the mood of the nation at a time when the nation was recovering from one crisis and about to move forward into war. 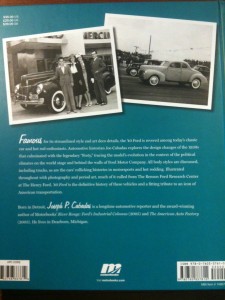 ????????? ?40 Ford shows the cars leading up to the historic 1940 model and cars that influenced it. He even deals with the production process that led to the creation of the car, the various body styles and the motorsports that resulted.

The book includes a treasure chest of historical pictorial documentation including 163 rare black and white photos along with 26 color photos.? The book is a large 9×11 format hardcover and is available in books stores or through the publisher for $35.? It is published by Motorbooks, a division of Quayside Publishing Group in Minneapolis.? For more information, or to order ?40 Ford: Evolution ? Design ? Racing ? Hot Rodding on line go to www.motorbooks.com. 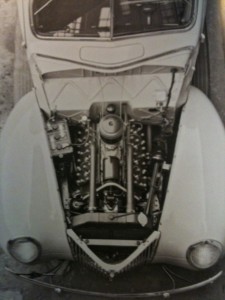