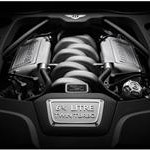 In the third episode of the Mulsanne story, Bentley gives an insight into the engineering of the V8 and the engine-build teams’ craftsmanship. Bentley’s new 6? litre, twin-turbocharged V8 engine has been completely re-engineered for the new Mulsanne. Cutting-edge technologies have been employed including two new control systems: cam phasing and variable displacement. In total over 300 new or significantly re-engineered components have been created for the 505bhp Mulsanne engine. The famed Bentley ‘wave of torque’ (1020Nm/752lb ft) is now delivered in full even earlier, at 1750rpm, assuring strong acceleration with 0-60mph achievable in just 5.1 seconds (0-100km/h in 5.3 seconds).