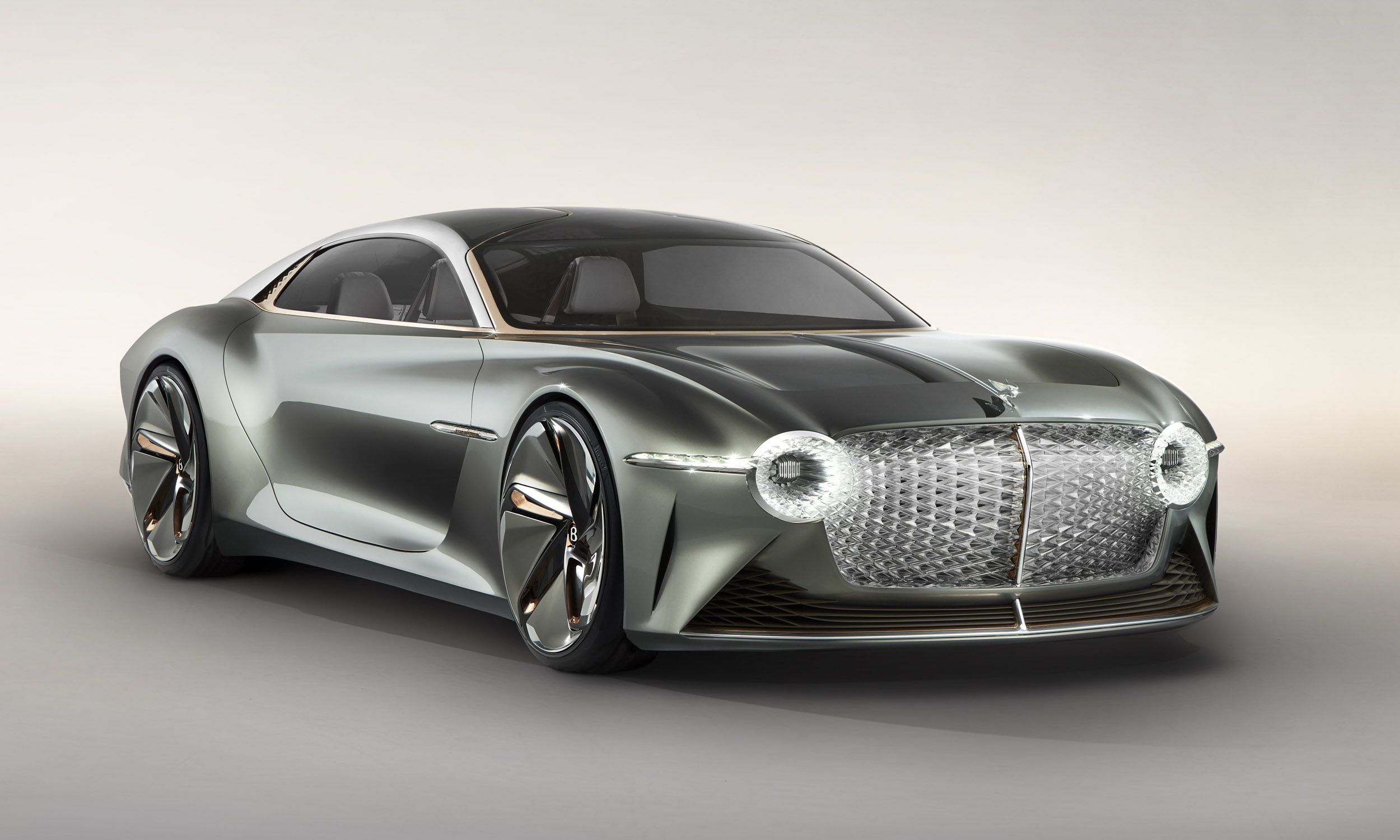 Bentley’s Next Century
July 10, 2019 — 100 years to the day since auto importer and entrepreneur Walter Owen Bentley created his eponymous car company, the famed British marque reveals its latest creation: the EXP 100 GT. As a testament to W.O.’s objective to build “a fast car, a good car, the best in its class,” Bentley celebrates its centennial with a look to the future while keeping the founder’s original objective in mind — presenting Bentley’s most innovative concept, the EXP 100 GT. 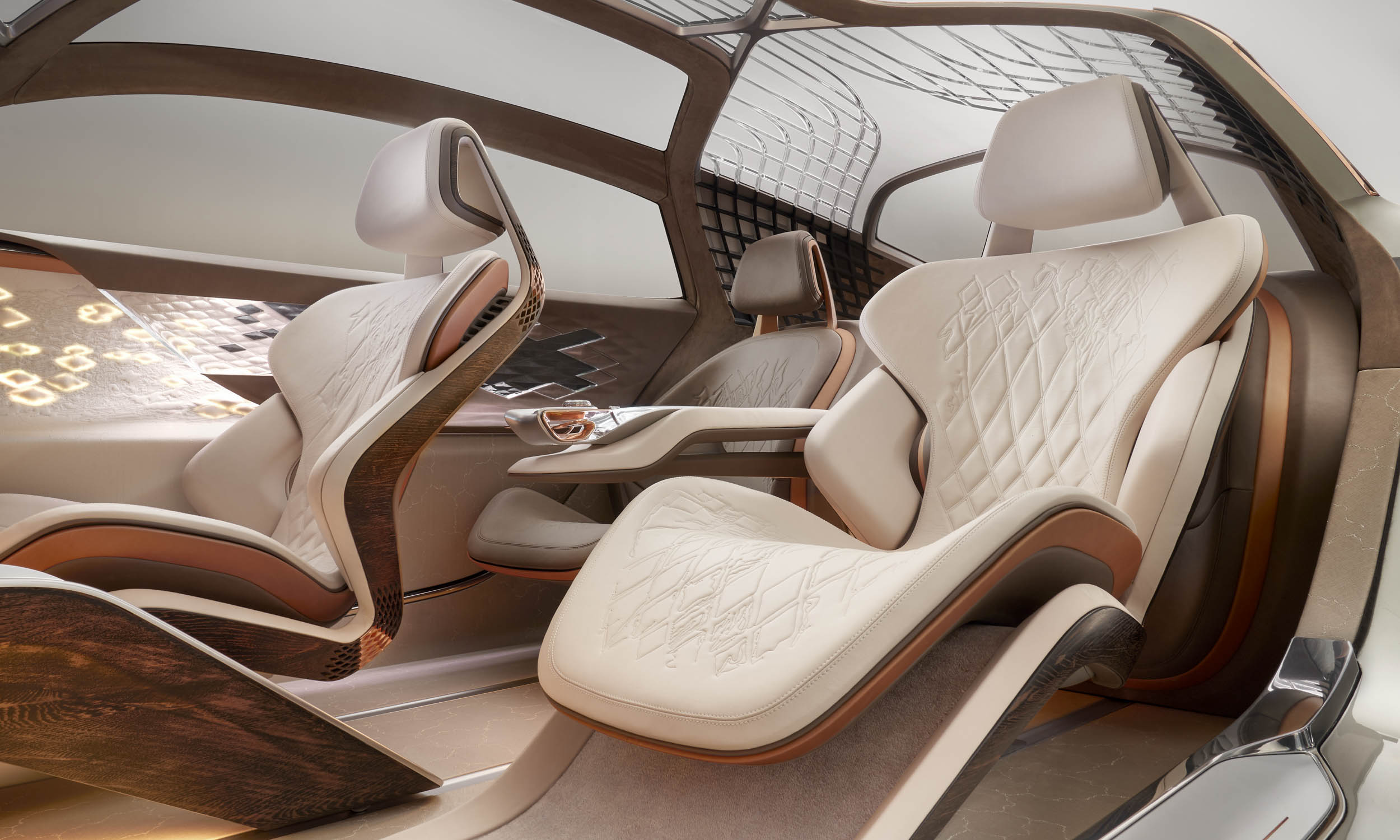 Future of Luxury
“Today, on our Centenary, we demonstrate our vision of the future of our Marque, with the Bentley EXP 100 GT — a modern and definitive grand tourer designed to demonstrate that the future of luxury mobility is as inspirational and aspirational as the last 100 years,” said Bentley Chairman and CEO Adrian Hallmark. “Bentley has, and will continue to enhance and enrich every single journey and the lives of every single person who travels in, or has the honour to be a part of creating our extraordinary products,” Hallmark exclaimed. 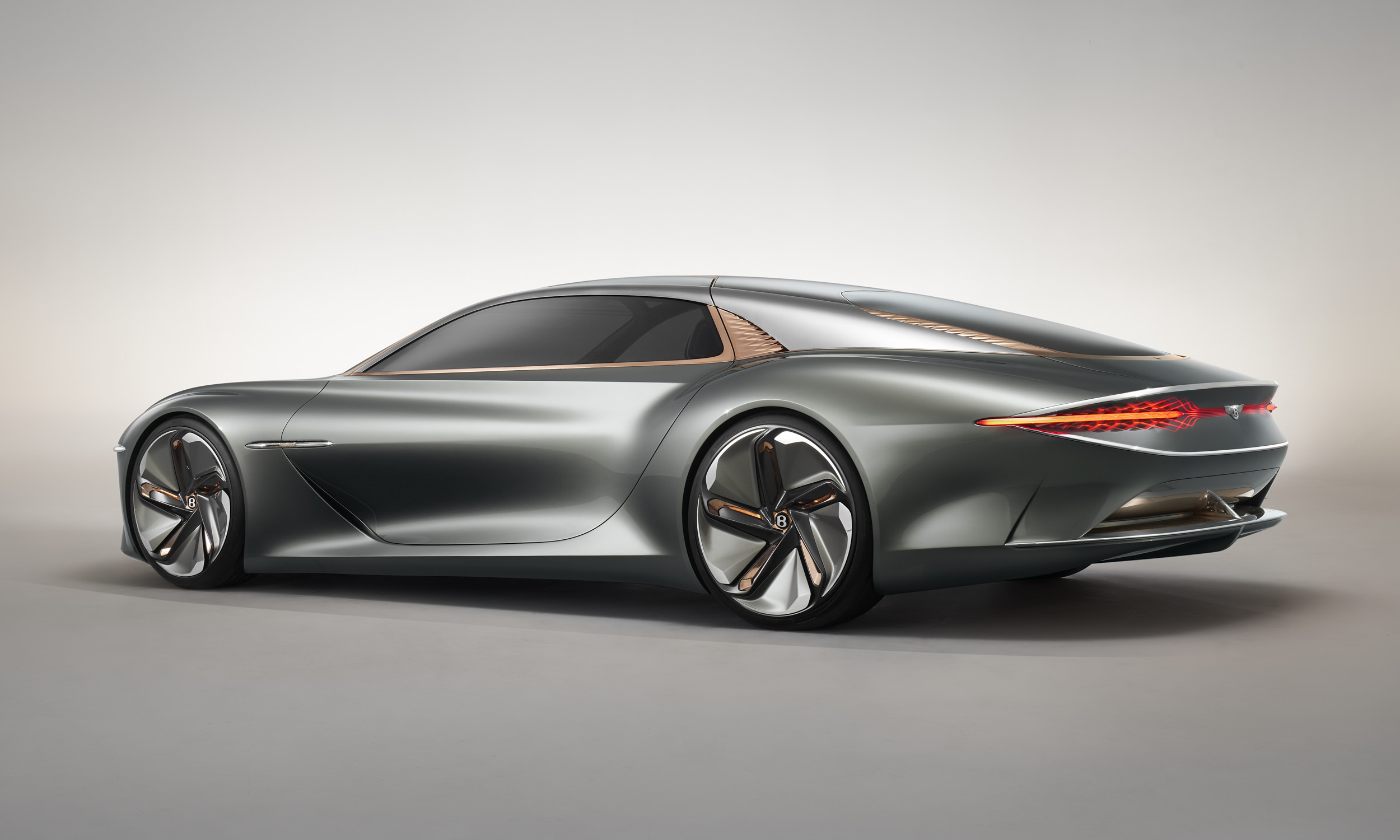 2035 Grand Tourer
The EXP 100 GT is advanced in practically every way, with a high-tech electric powertrain, autonomous driving abilities, futuristic artificial intelligence and a design that reflects a future Bentley. The company sees this concept as the Grand Tourer one could expect in the year 2035. “The Bentley EXP 100 GT represents the kind of cars we want to make in the future,” declared Bentley Director of Design Stefan Sielaff. “Like those iconic Bentleys of the past, this car connects with its passengers’ emotions and helps them experience and safeguard the memories of the really extraordinary journeys they take, “ Sielaff effused. 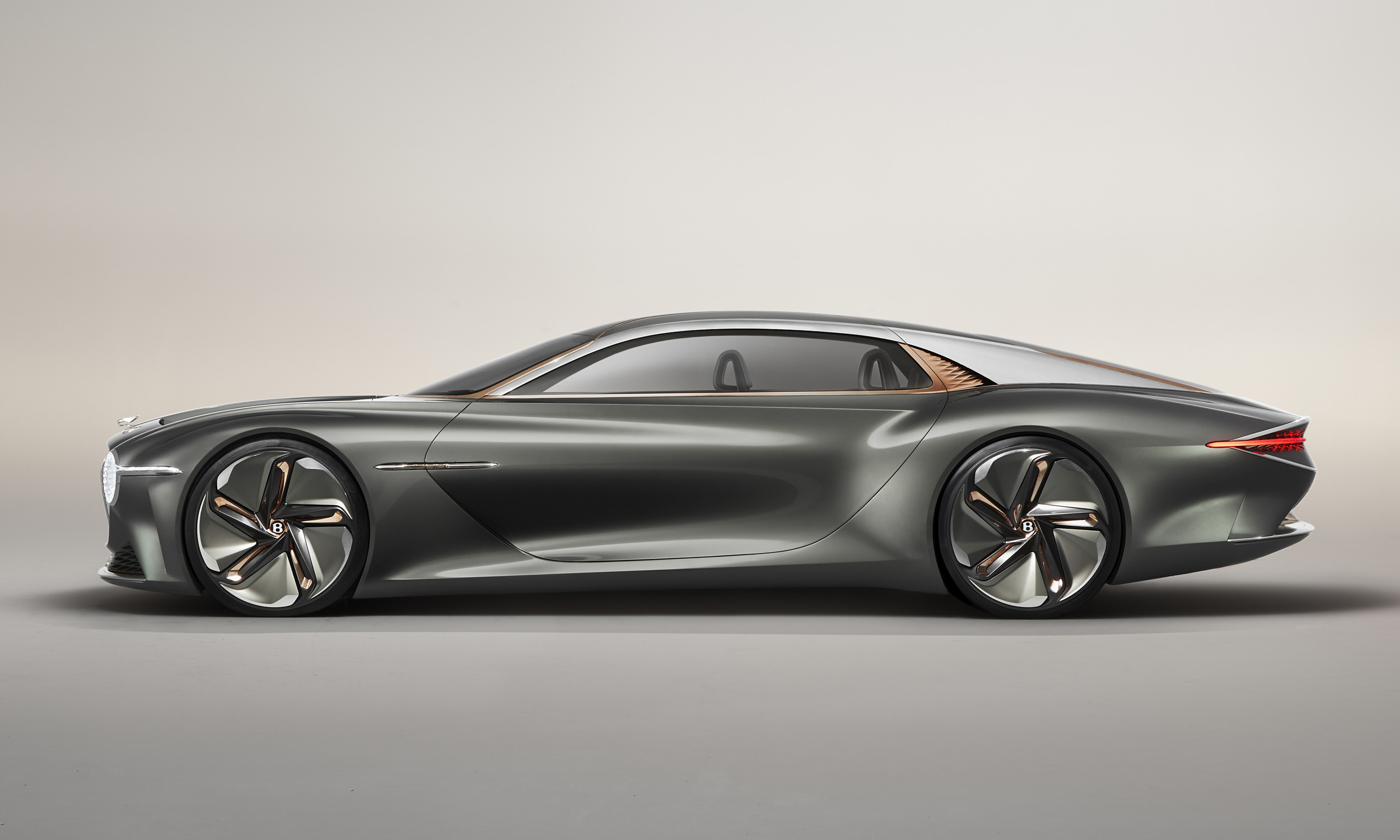 A Bentley Presence
The EXP 100 GT is built with aluminum and carbon fiber which keeps the vehicle light. Important to note, since this is not a small car. As a proper grand tourer, the EXP 100 GT has grand dimensions, measuring almost 20 feet long and close to eight feet wide. To say this car has presence is an understatement. 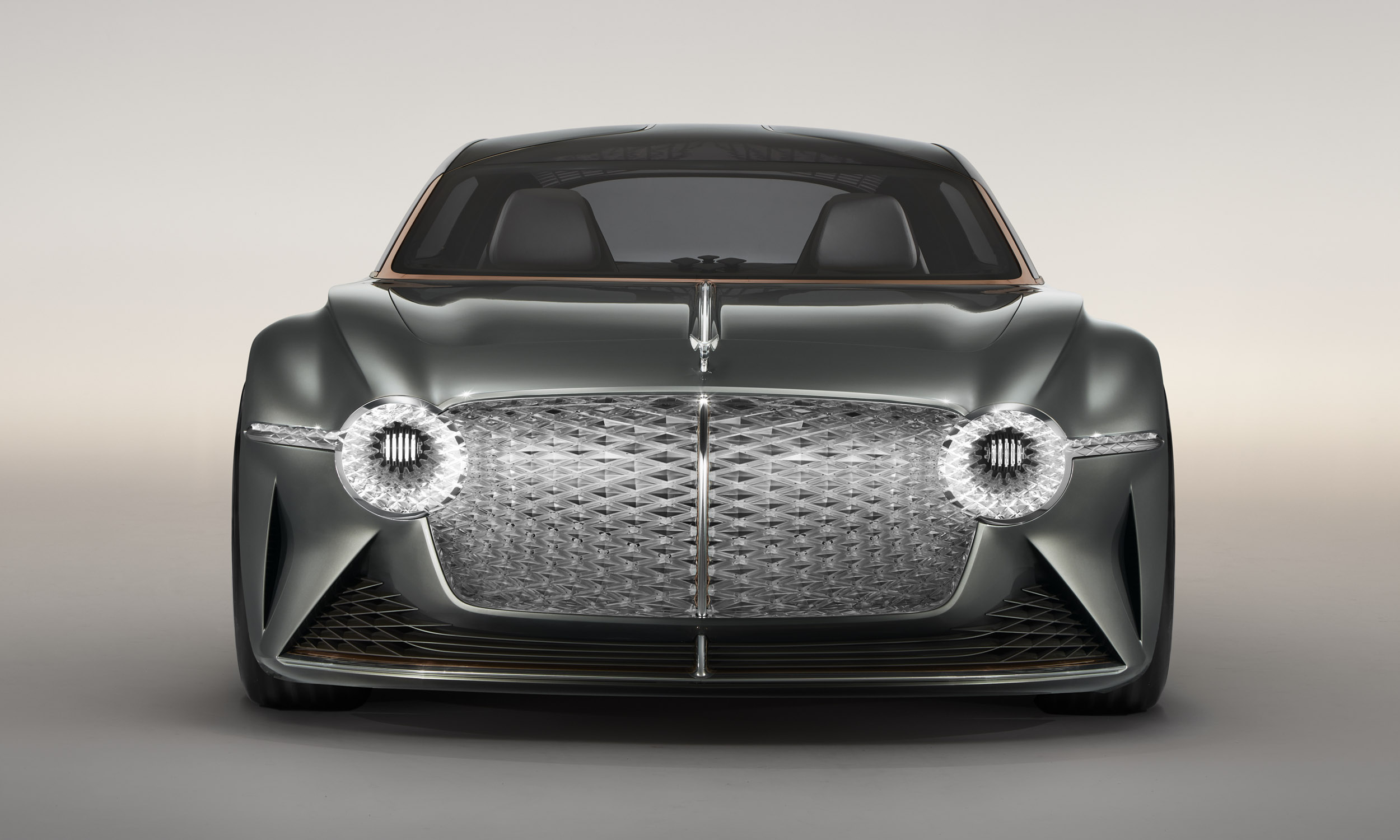 Coming to Life
While the design of the EXP 100 GT is thoroughly modern, styling cues abound that reference Bentley’s rich past. Up front big, round headlights overlap the grille — a look similar to the powerful Blower Bentleys of the 1920s. But the EXP 100 GT has a matrix grille that illuminates as the driver approaches the car, as does the futuristic Flying B mascot, giving the impression of the car coming to life. 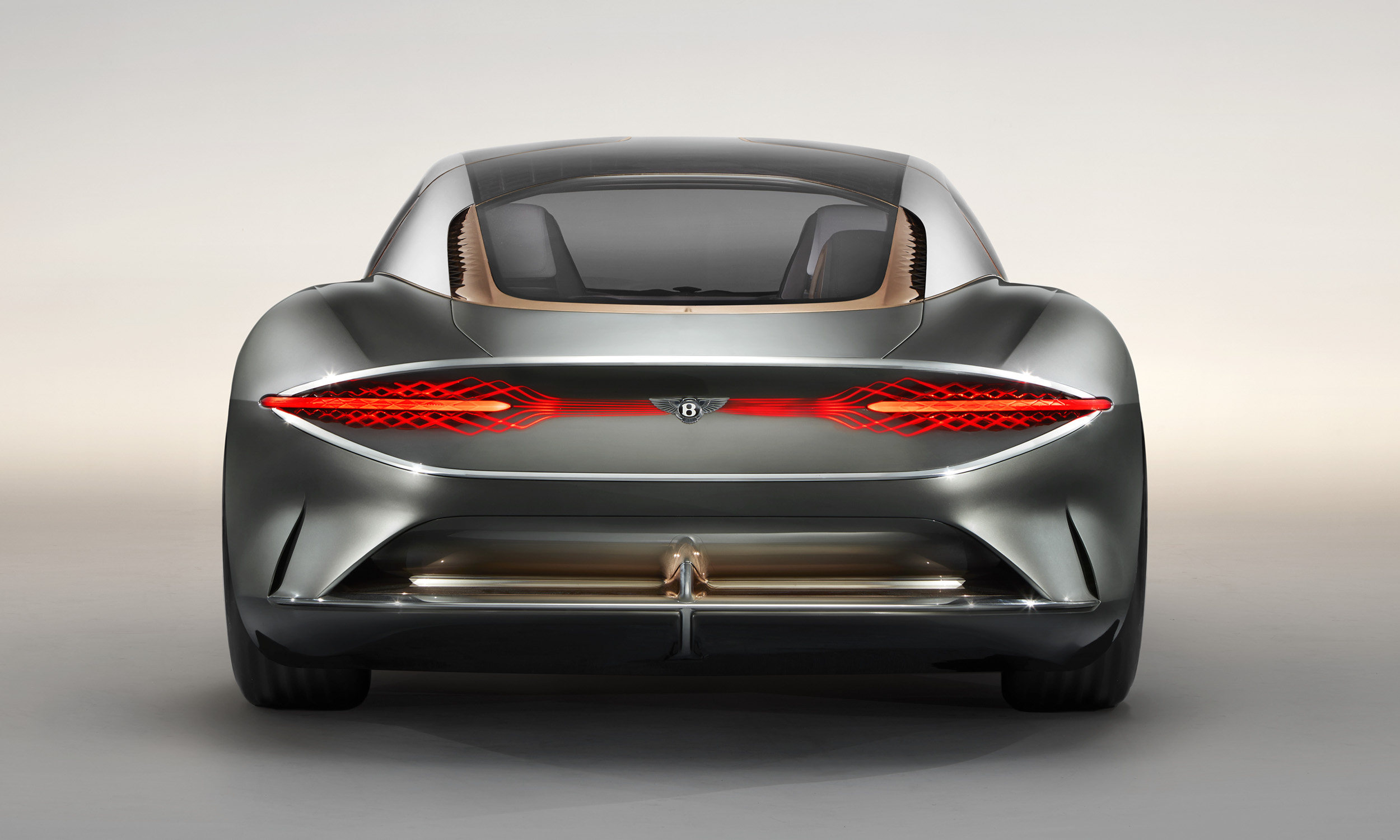 Unique Rear Lighting
Lighting also dominates the view from behind — a section of the boot (trunk) is a 3D OLED screen that allows a range of lighting effects to blend with the rear taillights. The greenhouse narrows at the rear, which further emphasizes large fenders that suggest broad shoulders. The powertrain is fully electric, so no tailpipes for this GT. 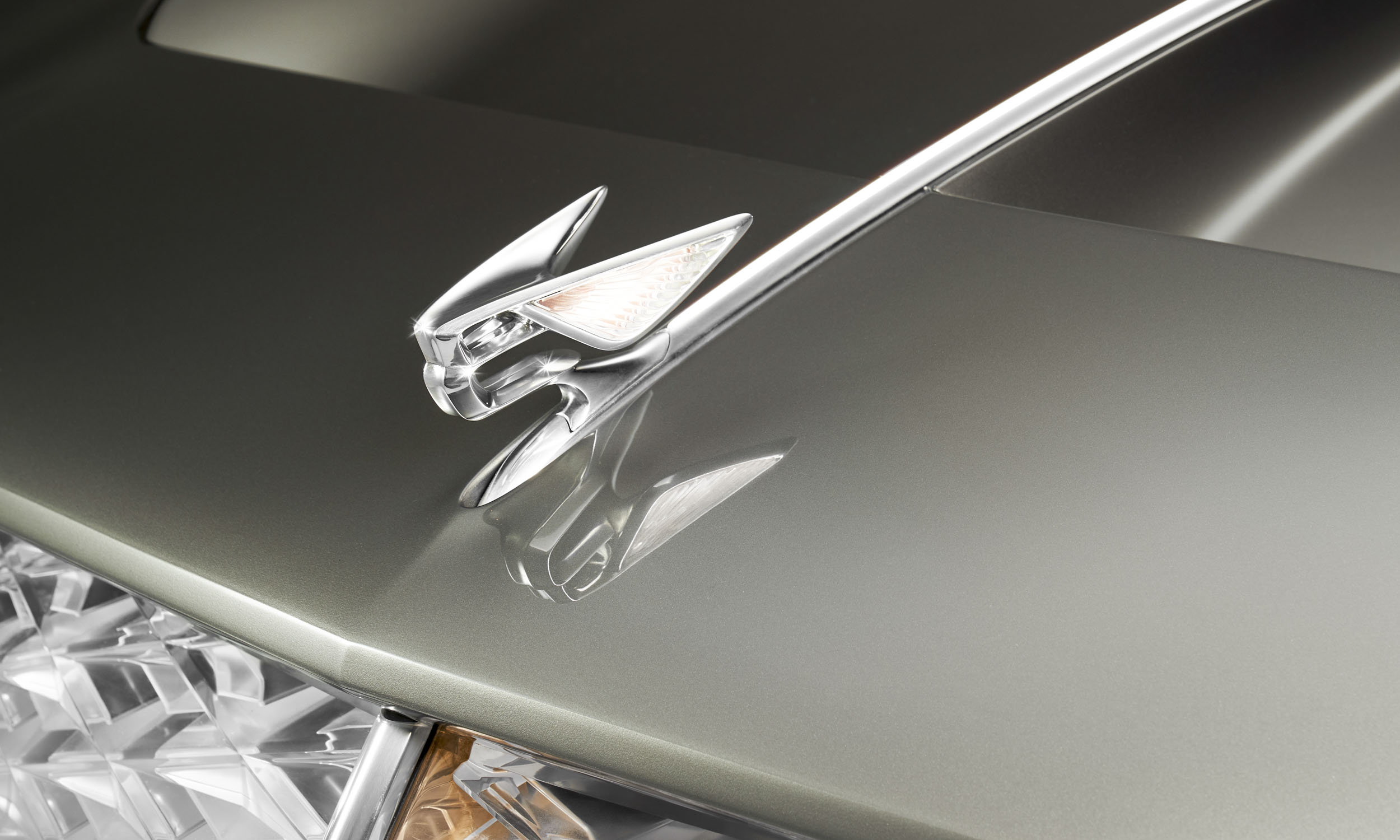 Special Paint
The EXP 100 GT is swathed in an exclusive paint color called Compass, which uses a special pigment that “reflects a beautiful spectrum of autumnal colors.” The paint is created with rice husk ash — a by-product of the rice industry that would typically end up in a landfill. 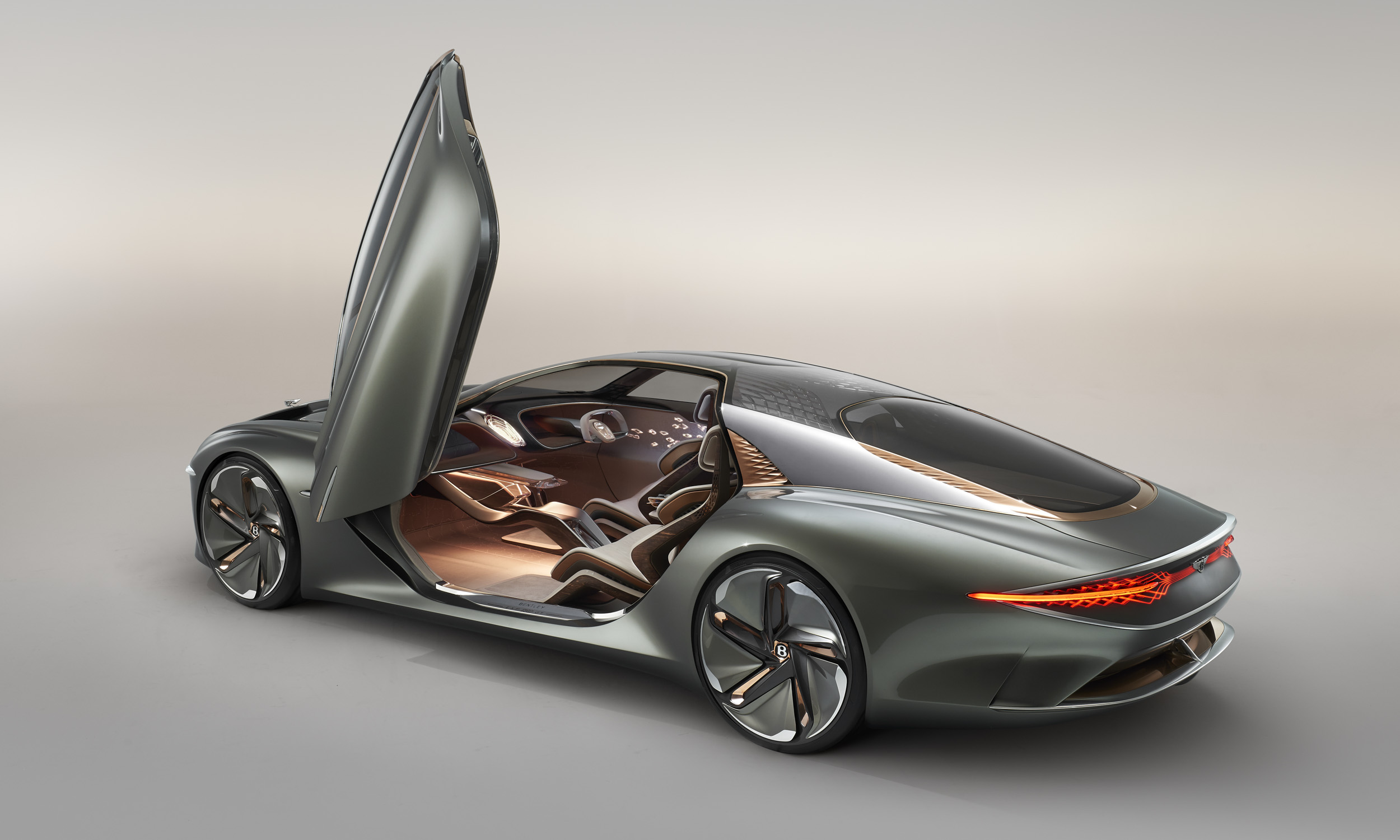 The Doors
Even though the EXP 100 GT would stand out in any crowd, it garners even more attention while the doors open — the large panels rotate out and up, ultimately rising almost 10 feet in the air. Bentley designers claim this adds a sense of occasion to the car’s arrival. An apt observation, but the doors might be difficult to open in a typical garage — perhaps garages of the future will be taller. 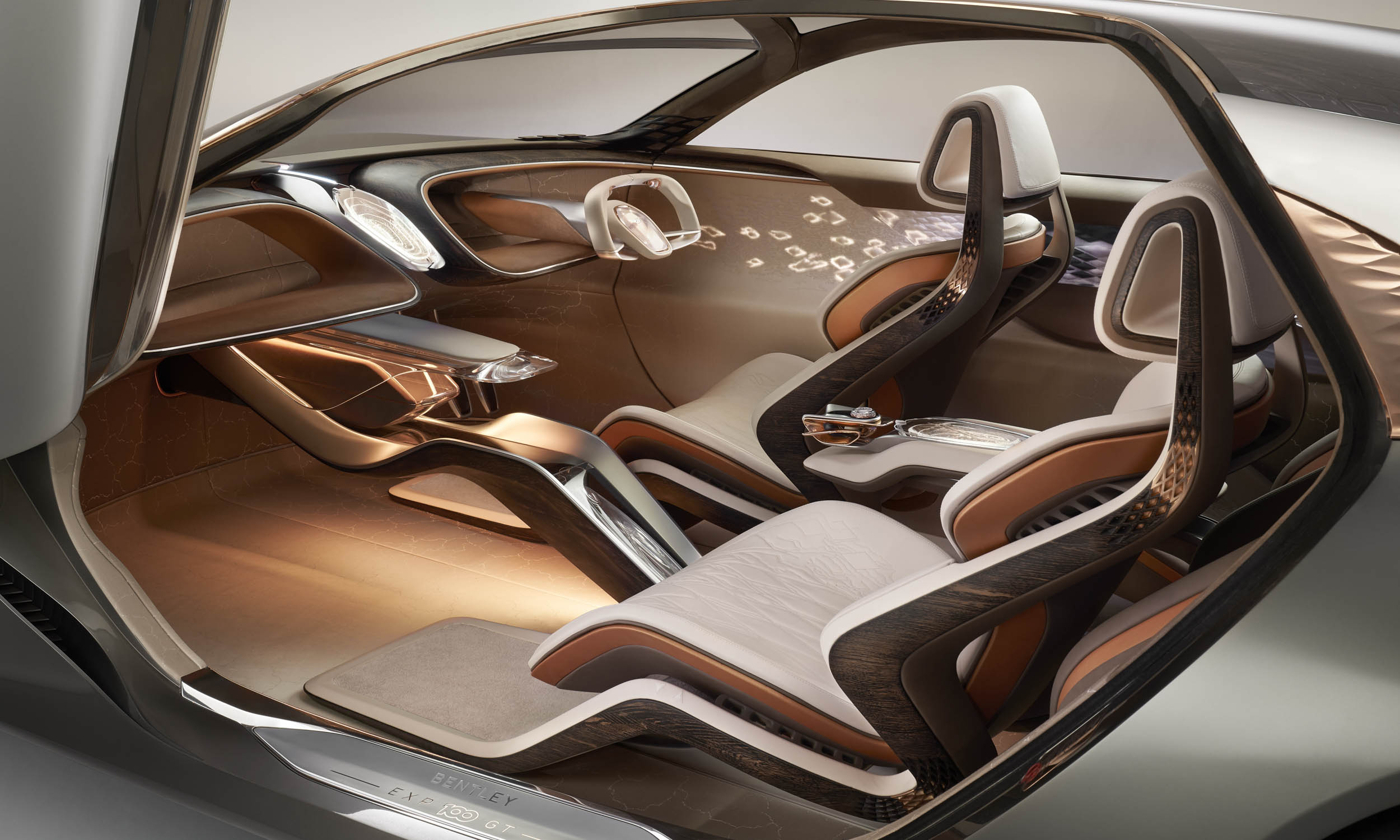 Light and Sustainability
Inside, this stunning Bentley concept blends wood, leather and glass with light for a unique ambience. Much of the light is natural, harvested via an innovative glass roof embedded with prisms that transfer luminescence to the cabin via fiber optics. Light can also be projected in patterns onto trim panels for an artistic effect. Materials throughout represent a sustainable future — something required of a company lasting another 100 years. Bentley uses copper-infused Riverwood sourced from fallen trees that have been preserved for 5,000 years in bogs, lakes and rivers. The seats are trimmed in an organic leatherlike material created from the by-products of wine making. Carpets are woven from British farmed wool. 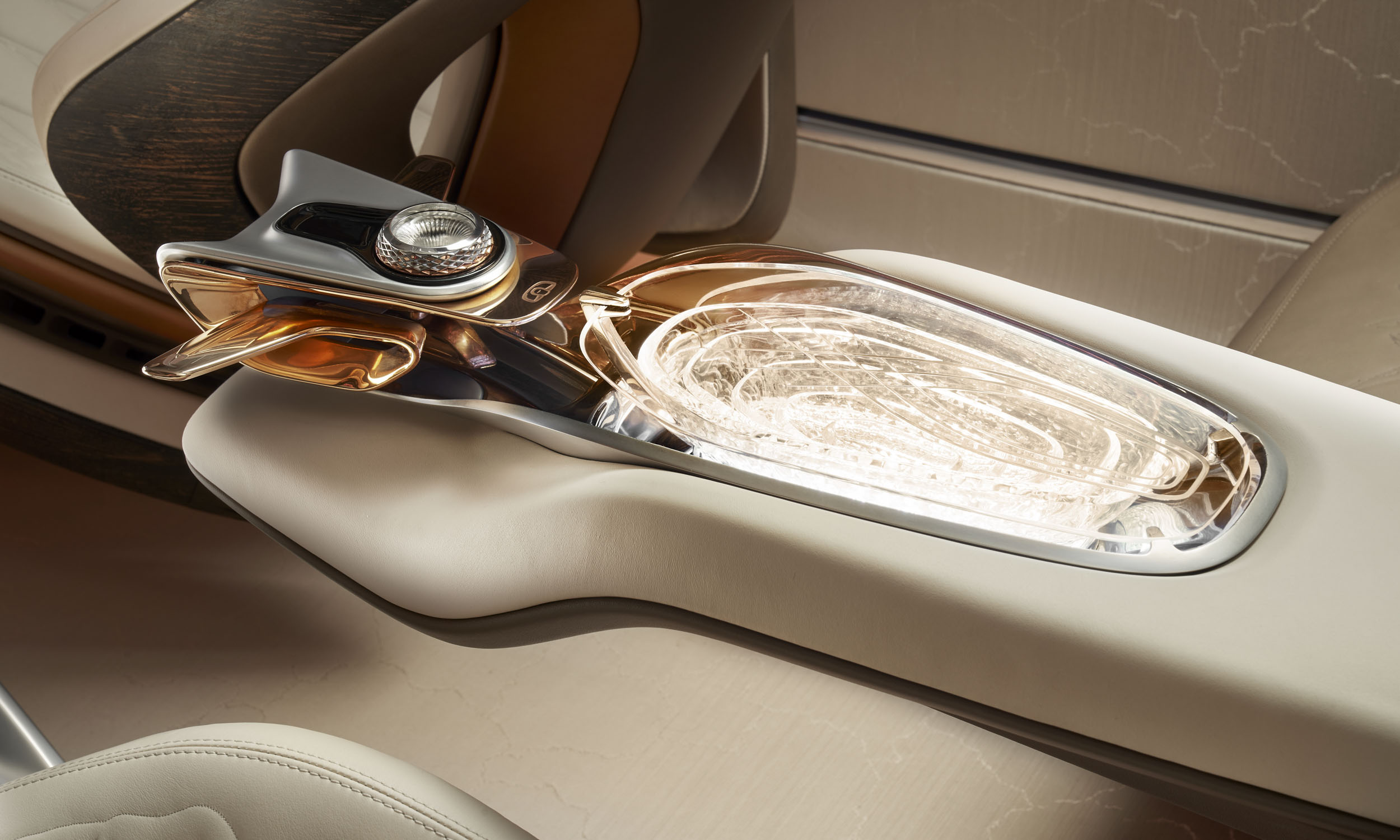 Bentley Personal Assistant
At the center of the cabin is the Bentley Personal Assistant — visualized with an illuminated crystal that comes from Cumbria, England, and interacted with via hand gestures. This BPA operates with artificial intelligence to act as a guide for the driving experience, even offering points of interest along the route or providing suggested stops appropriate for a Bentley driver. The personal assistant can deliver five distinct experiences: Enhance, Cocoon, Capture, Re-Live and Customize. For example, Enhance brings in lights, sounds and smells from the outside environment, providing the feel of an open-top ride with a clear view above through the glass roof. Conversely, Cocoon creates a more protective space, purifying the air and turning all the glass opaque. 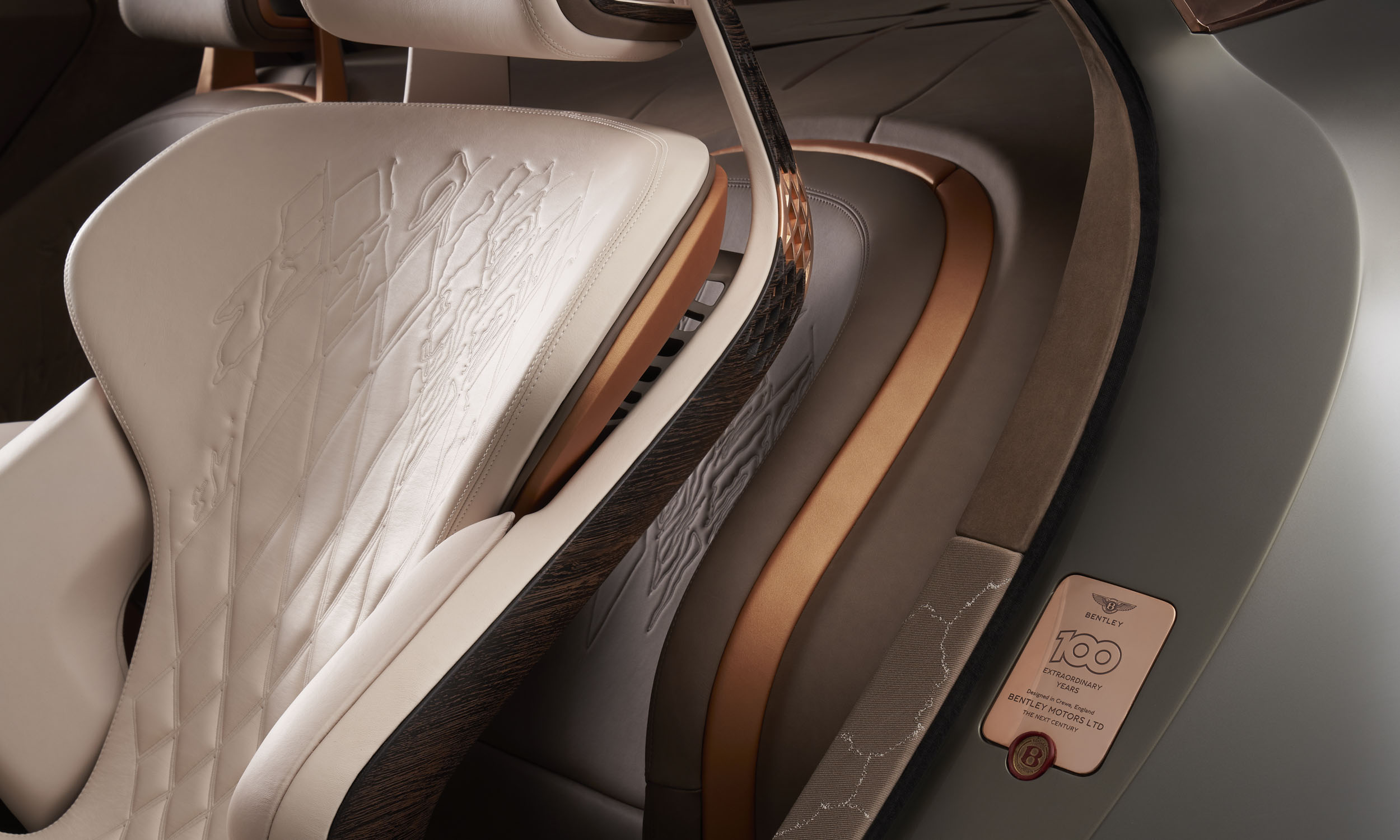 Biometric Seating
Forward-thinking designers of the EXP 100 GT’s interior created a unique occupancy experience, referred to as Biometric seating. The seats rely on sensors that can track eye and head movements; they also monitor temperature, blood pressure, passenger position and exterior conditions and adjust for ultimate comfort. The seats swivel rearward as the steering wheel retracts when the EXP 100 GT converts to autonomous drive mode. 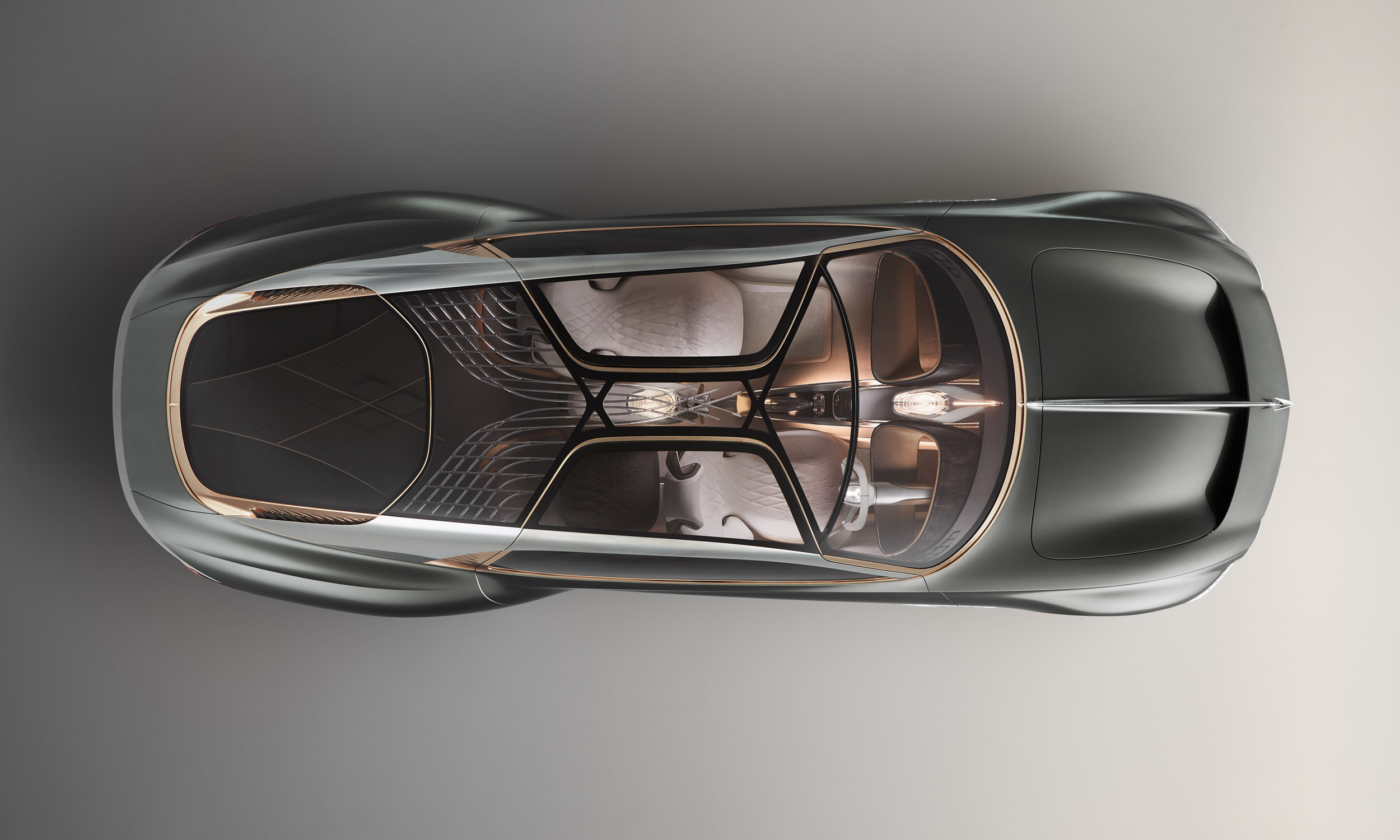 Electric Performance
While there are clearly high levels of luxury throughout the EXP 100 GT, Bentleys are also known for their performance — and the EXP 100 GT does not disappoint. The battery-electric powertrain consists of four motors that provide all-wheel drive — as well as torque vectoring — for the ultimate in control. With more than 1100 lb-ft of torque on tap, this big luxury tourer should jump to 60 mph in less than 2.5 seconds on its way to a top speed of 186 mph. The dense batteries are lighter than current systems, and would provide a range of about 435 miles. A charge to 80 percent would take a mere 15 minutes. 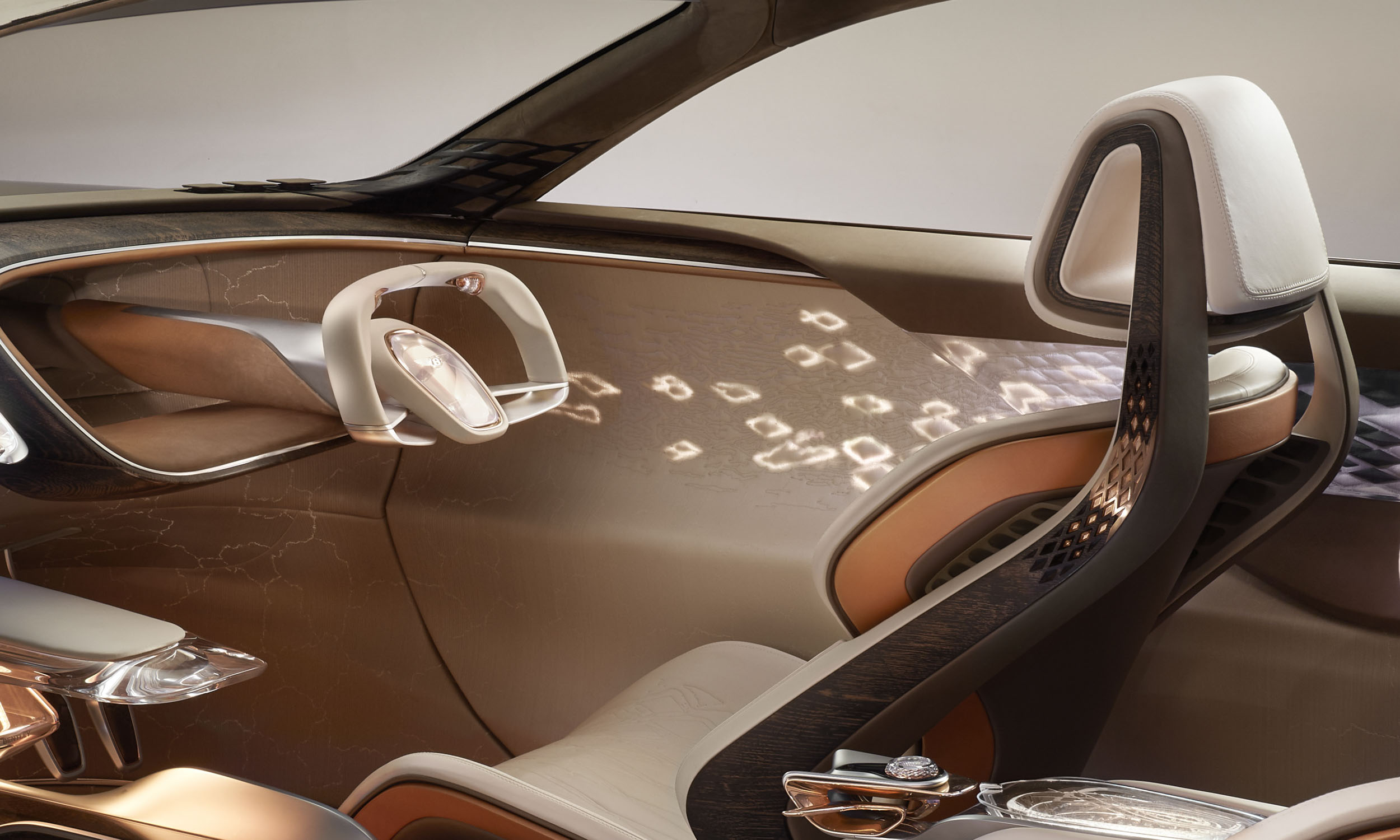 Drive or Be Driven
Bentley designed the EXP 100 GT to be relished by a driver who loves the thrill of carving a mountain road or cruising a curvy coastline. But for those times when the driver chooses to disengage — sitting in traffic, crossing Montana on a long, straight highway — autonomous mode can be employed. 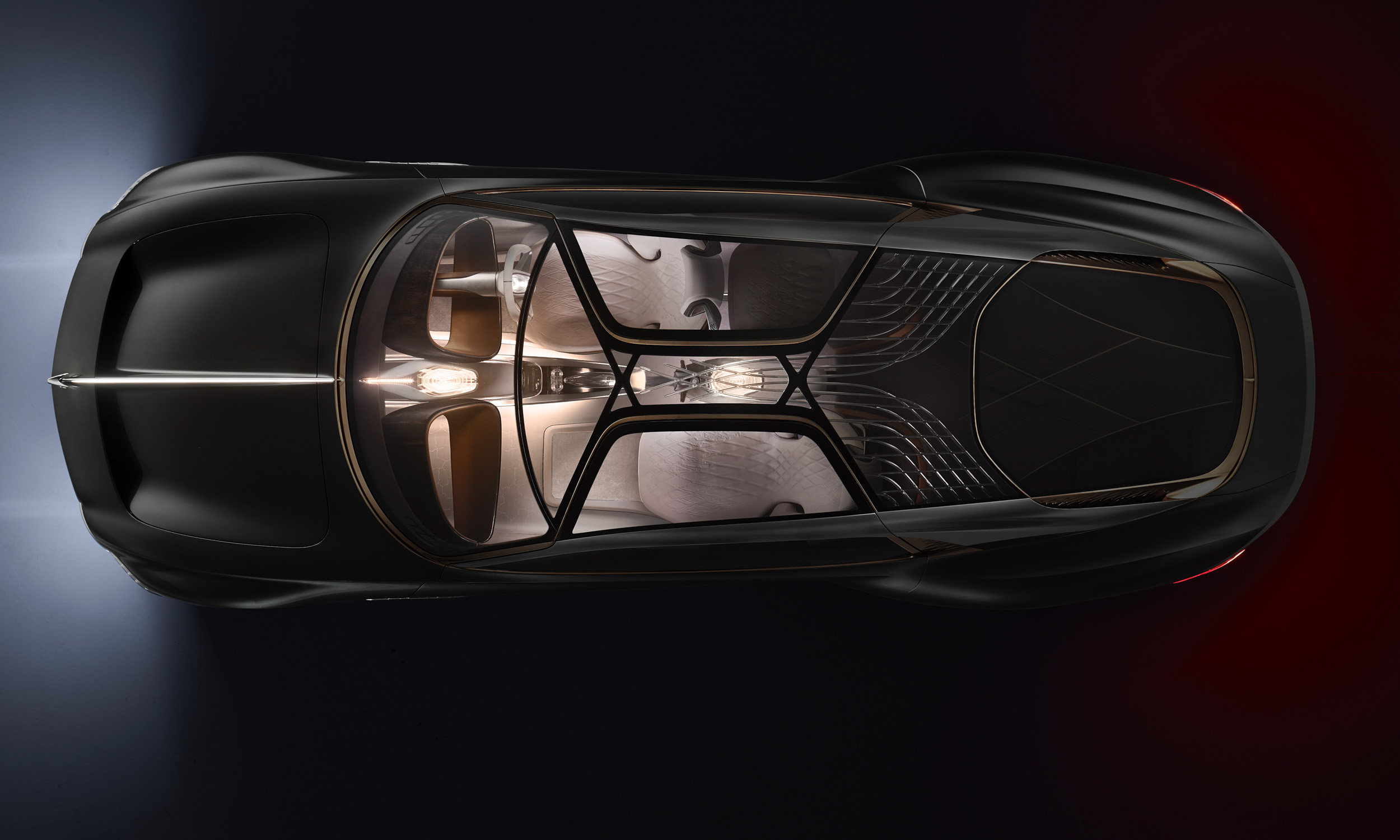 A Promising Future
For an automotive marque with a heritage as rich as Bentley, it’s important to set the stage for what comes next. The EXP 100 GT provides this glimpse at this future, confirming that Bentley will continue to honor W.O.’s goal of building “a fast car, a good car, the best in its class.” For the driving enthusiast, it’s ensuring to see that a time-honored company such Bentley has a future in mind in which humans still have the option to drive themselves. 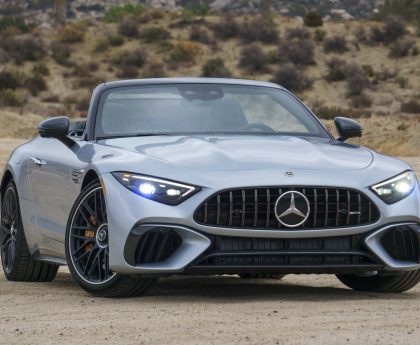 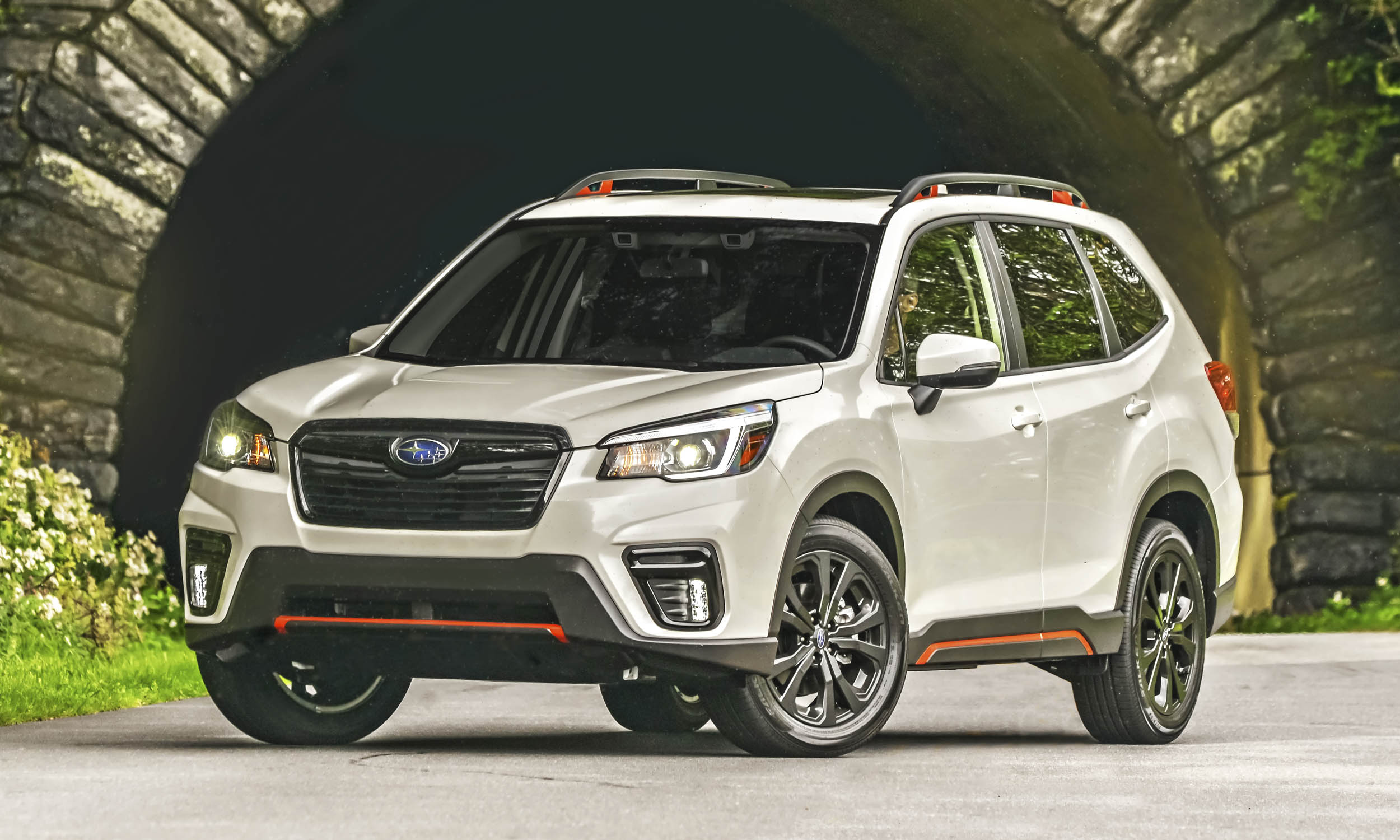