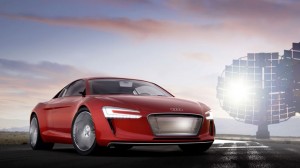 Audi has announced plans for a rapid implementation of a hybrid and electric program as their part of the Volkswagen group strategy to dominate the alternative-powertrain market.? The Q5 crossover will be the first hybrid followed soon by the new A8 sedan and next generation A6 sedan by the end of 2012.? Audi expects to expand hybrid capabilities across the lineup by the 2020.? Plans also call for improving internal combustion engine efficiency by 30 percent.? Michael Dick, Audi board member for technical development, said the e-tron electric vehicle name, introduced last September in Frankfurt, will eventually make up to five-percent of the Audi products lineup and that the e-tron name will become as important for Audi as the quattro all-wheel drive brand.