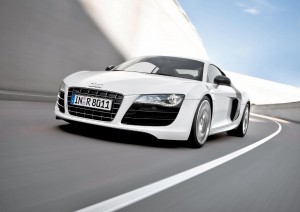 At a press conference hosted by the New York International Auto Show, the Audi R8 V10 was today declared the 2010 World Performance Car.

The Audi R8 V10 was chosen from an initial entry list of sixteen (16) entries nominated by fifty-nine (59) World Car jurors from twenty-five (25) countries throughout the world. The top three contenders for the title were, in alphabetical order, the Audi R8 V10, the Ferrari California and the Porsche 911 GT3.

While the winner of the overall World Car of the Year award must excel in a broad range of attributes, there is a segment of the car-buying public for whom performance – in its broadest sense – overrides all other priorities. Candidates for the World Performance Car award must demonstrate a specific and overt Sports/Performance orientation. They must also satisfy the same availability criteria as for the overall World Car award and may be chosen from that list of eligible vehicles.

The World Car Awards jurors observed that, “In the opinion of many a judge on the World Car Awards jury, Audi has at long last satisfied our hunger for a street car that lives up to the excitement of the original Le Mans series-dominating R8 LMP1 car that changed the endurance racing game starting in the 2000 season. This civilian trim uber R8 shares the 5.2-liter engine and chassis of the more powerful and lighter Lamborghini Gallardo LP560-4, so that we all really liked driving it this year should come as little surprise. With 525 metric horsepower and a big exhaust note, this Audi has been clocked to a 60-mph acceleration time of just 3.4 seconds by several publications worldwide. Almost as impressive as the minimum $150,000 those fortunate enough get to pay for one.”

Now in their seventh year, the annual World Car awards have become one of the world’s most prestigious, credible and significant programs of its kind.