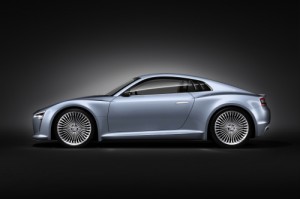 Audi is exploring all options with its R8 sports car ? gas, diesel and now electric.? Making a demonstration run at the famous 24 Hours of Le Mans in June, the Audi e-tron was driven by racing legend Frank Biela to show the future of sporty electric cars.

Powered by four motors ? two each on the front and rear axles ? the Audi e-tron is a true quattro. The combined output of the four engines makes 313 hp and 3,319 lb.ft. of torque (or 502-lb.ft. in real-world terms.?? According to the manufacturer, the two-seater accelerates from 0 to 62 mph in 4.8 seconds, which is about 0.2 seconds slower than the R8 V-8. The battery is located directly behind the passenger cabin for an optimal center of gravity and axle load distribution. 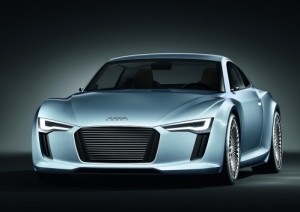 Beyond making demonstration runs at racing venues, the e-tron has also been seen testing in full camouflage on highways recently.? Insiders say the electric supercar will go on sale in North America by the end of 2012 in a limited edition of 1,000 cars. Each car will be built to order at a price tag in excess of the $114,000 price of the existing R8 V-8.

The Audi e-tron was recently named the North American Concept of the Year in a tie vote with the BMW Vision Efficient Dynamics by a panel of North American automotive journalists.

(Photos shown here are of the Audi e-tron?concept)