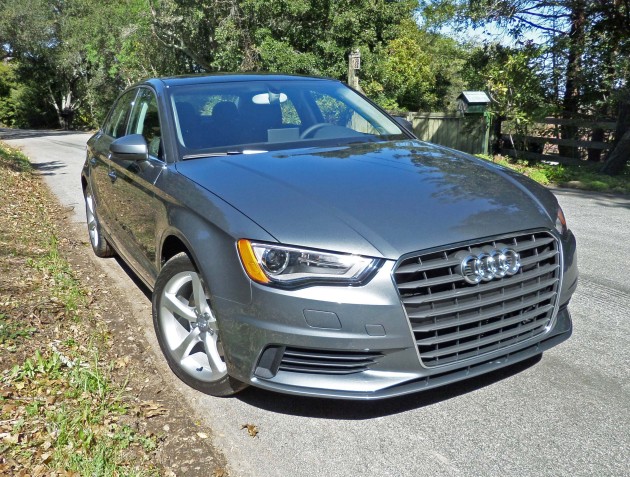 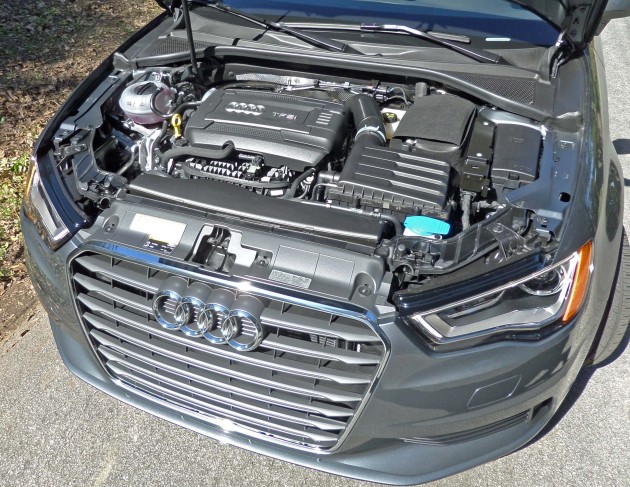 Both models will gear power from their transversely mounted front engines to the driving wheels via a six-speed S tronic? dual clutch automatic transmission. The 1.8T model is FWD with no paddle shifters, while the 2.0T A3 features Audi?s Quattro permanent all-wheel drive system, with the six-speed S tronic transmission, which features steering wheel mounted paddle shifters when equipped with the special S Line Package. 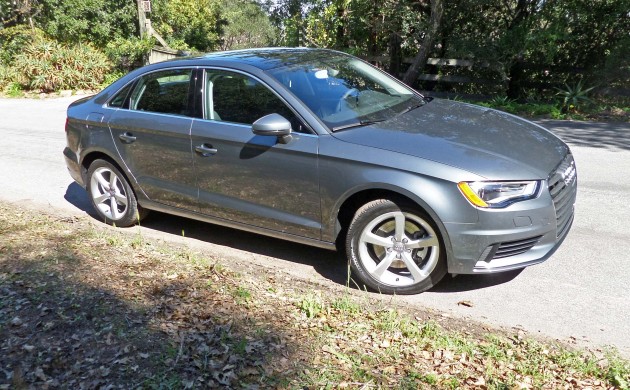 External dimensions for both Audi A3 sedan models are shared, as is the exterior styling, which features all-new sheet metal, and is longer and wider than its predecessors. Ultimately, there will be a total of seven A3 model variants in four body styles, with five unique engine choices. Coming this Fall, will be the recently announced Audi A3 Cabriolet, an A3 TDI? clean diesel, the high-performance S3 Sedan and coming in early 2015, the A3 Sportback e-tron? gasoline electric hybrid with a PHEV emissions rating. 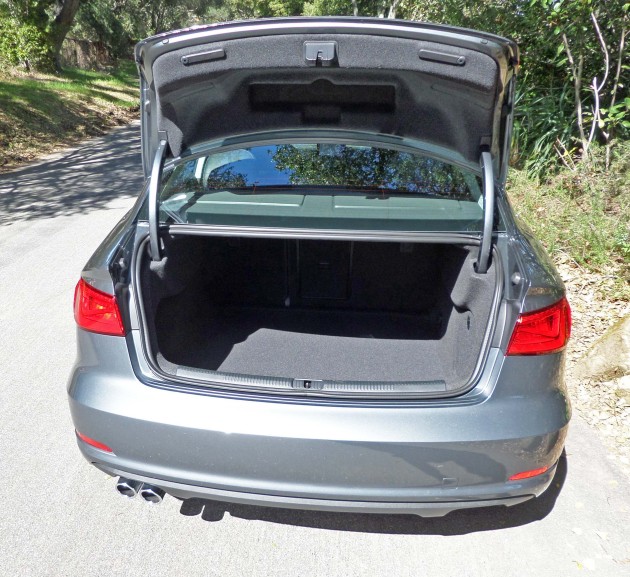 The 2015 Audi A3 sedan is available in three levels of trim: a base Premium Package; a Premium Plus Package; and a Prestige Package. The Premium plus will include exclusive18″ 10-spoke-design Audi wheels, an aluminum interior package, and keyless entry for an additional $2,550. The Prestige package will include everything that is offered in premium plus, and will give the A3 Sedan a sportier look with the SLine? exterior kit. It will also offer the Driver Assistance package, Bang & Olufsen Sound System, Audi MMI navigation plus, Audiconnect?, Convenience package and full LED headlights for $8,450. Standard fare for all A3s will be a panorama glass sunroof and bi-xenon headlights. 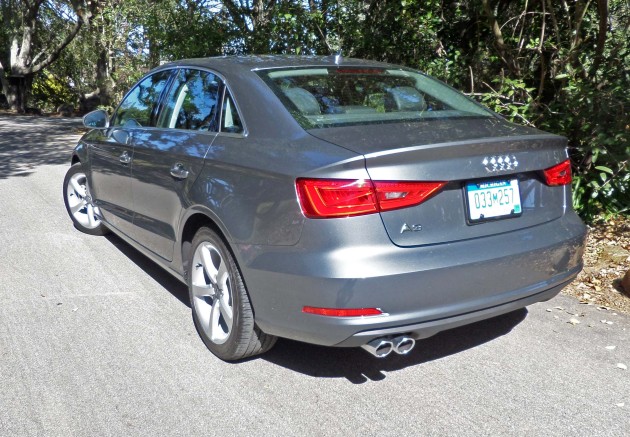 The exterior of the Audi A3 sedan has been completely redesigned, and tailored specifically for the American marketplace. Its length has been stretched to 175.5-inches on a 103.4-inch wheelbase, which combine with its 70-inch width and 55.7-inch height to display a compact, but very sporty persona. The signature Singleframe? trapezoidal grill leads off the sleek and aerodynamic profile, which presents a low, stealthy image. 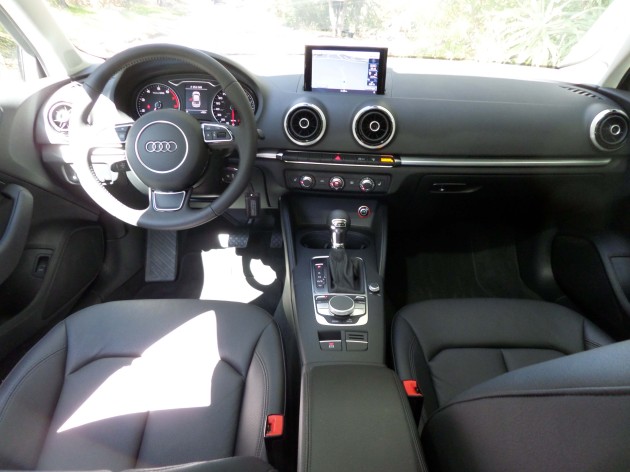 The A3?s interior reflects the athletic exterior, exhibiting a ?wraparound? dash design that incorporates an innovative three-dimensional inlay concept, which surrounds both the driver and front passenger. The craftsmanship of the A3 along with the exceptional fit and finish abound throughout the cabin.

Technology bounds as well, raising the bar to new heights in what is normally expected from entry-level luxury vehicles. The Audi A3 sedan marks the first time that an A-segment vehicle will offer MMI? technology, Audi drive select, 4G LTE connectivity and Bang & Olufsen audio (an optional 705 watt, 14-speaker system is available from Bang & Olufsen). The MMI operating system features an electronically extending screen that is housed in the console of the center dashboard. A touchpad is now offered, which is incorporated into the rotary MMI control wheel. A NVIDIA graphics-processing unit generates complex 3-D images utilized in all online voice control, media navigation and telephone functions. The latest and most advanced version of Audi connect? allows for optimum social networking and connectivity. 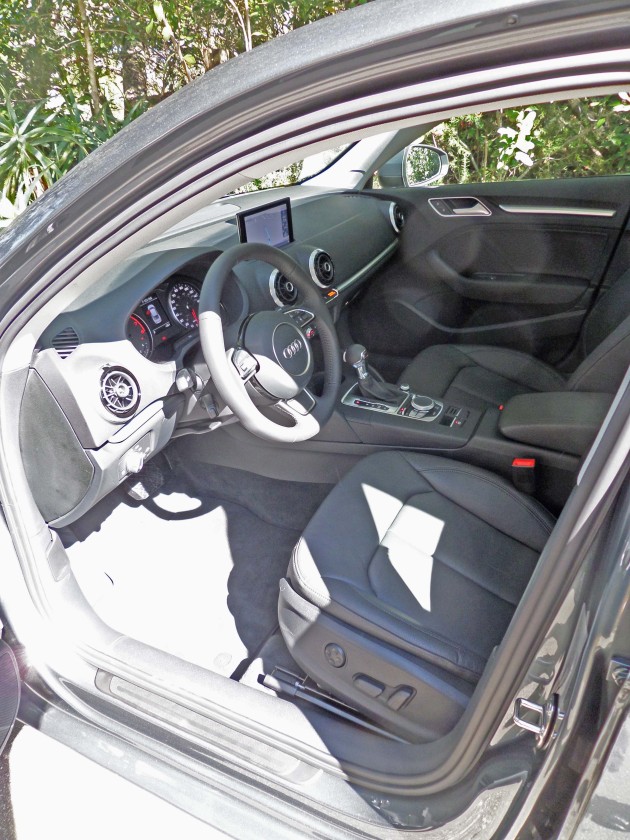 Suspension componentry consists of a MacPherson strut design up front with aluminum A-arms and a stabilizer bar. Pivot bearings are joined to an aluminum subframe. In the rear is a Four-link system utilizing a steel crossmember, with springs and shock absorbers mounted separately. Braking is accomplished through a power hydraulic assisted, dual circuit four-wheel disc system (vented front) with a diagonal split, ESP with EBD, ABS; brake servo with dual-rate function, and electronic differential lock. 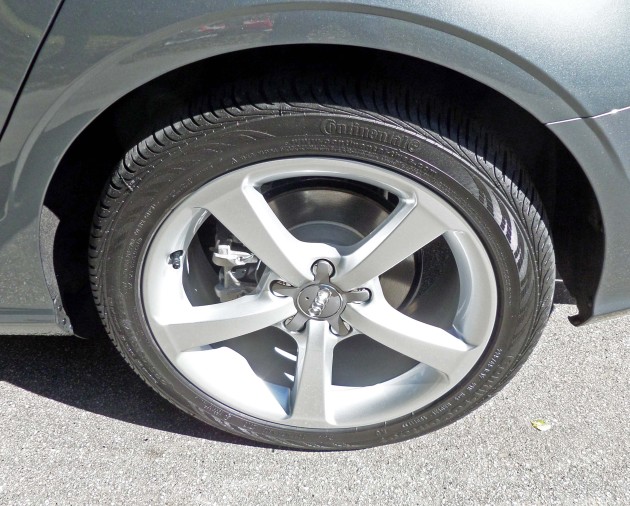 I piloted both the 1.8T and 2.0T versions of the Audi A3 in a variety of driving scenarios from congested city traffic to higher-speed freeway travel, with challenging, narrow, twisting back roads thrown in between for good measure. My 1.8T A3 Premium Edition sedan was in the Front wheel drive configuration with the S tronic automatic transmission. It sported a Monsoon Grey metallic exterior with a Black interior and came with a base price of $29.900, while the final sticker totaled $34,345 after factoring in: the metallic paint; Audi?s MMI Navigation Plus; the Cold Weather Package; Aluminum Style Package; Audi Music Interface with iPod Cable; Exhaust Tips; and the Destination charge. 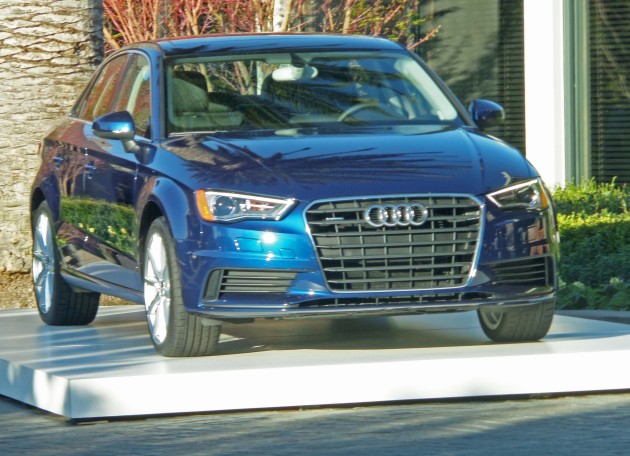 My 2.0T tester was a Quattro drive version, also in Premium Edition trim with the six-speed S tronic transmission. It wore a Scuba Blue exterior finish, with the interior done in Chestnut Brown. The base sticker was set at $32,900., while adding the Audi MMI Navigation Plus; the Cold Weather Package; Aluminum Style Package; Audi Music Interface with iPod Cable; Exhaust Tips; and the Destination charge, brought the final tally to $37,195.

SUMMARY:??The ad tag line for the 2015 Audi A3 4-door, 5-passenger entry luxury sedan is ?Hugs Corners, Cuts None? ? Stay Uncompromised. In a special design presentation the new A3 was likened to a ?Tailored Dinner Jacket? ? made to fit in a powerfully dynamic form that projects precise light and shadow interplay over its sleek surfaces. All descriptions are indeed appropriate.

This latest Audi A3 represents the epitome of the class that it falls into. It is visually attractive and appealing, with a sporty aura. It is also available at a very attractive price, especially when taking into consideration its feature and equipment inventory, and its performance capability.

Both versions of the new turbocharged, direct injection engines deliver more than satisfactory doses of acceleration on demand, and the 6-speed S tronic gearbox shifts smoothly up and down, whether in automatic or manual mode. Neither version that I drove came with paddle shifters, which I understand will become available at a later date for the 2.0T models. 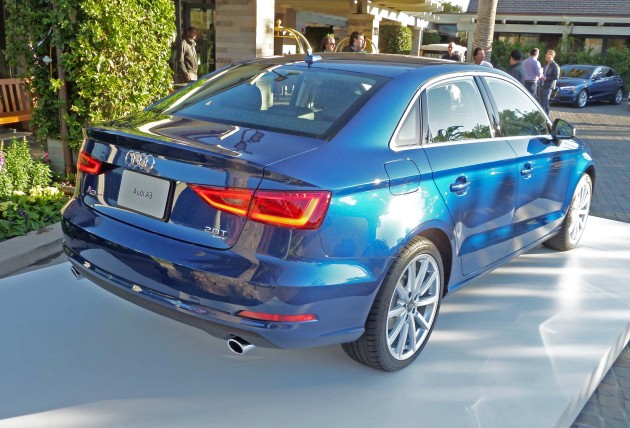 The seating is both comfortable and supportive, the handling characteristics sporty and precise, and the ride quality is pleasingly compliant without undue harshness. The A3 is a delight to drive, whether simply cruising or prodding with gusto. In a final evaluation, it leaves virtually nothing to be desired from an entry-level luxury sedan, and it will surely prove to be highly competitive in its market segment, considering its exceptional superiority in terms of price and standard equipment and features. It is unquestionably a highly desirable sedan in either of its model offerings. I found the 1.8T to be much more than adequate, but should one require a higher level of performance, the 2.0T is there for you.
[wptabs style=”wpui-light” effect=”slide” mode=”horizontal”]
[wptabtitle] SPECIFICATIONS: 2015 Audi A3 1.8 & 2.0T Sedan [/wptabtitle]
[wptabcontent] 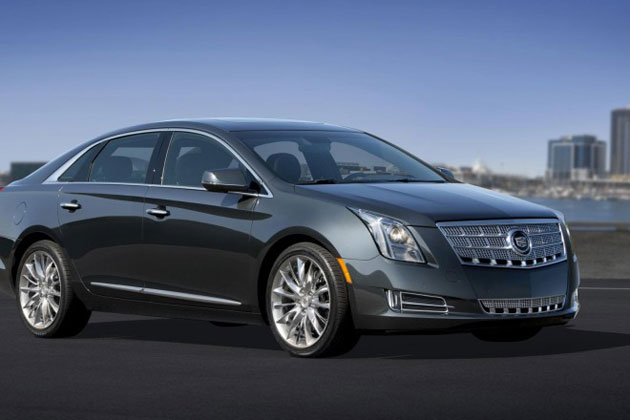