Eagle, Idaho – It was hard to believe that the bright red SUV parked in our driveway was really a high-performance sports car in disguise. At first glance it was just like another one of the dozens of mid-size SUVs we see on the roads every day. 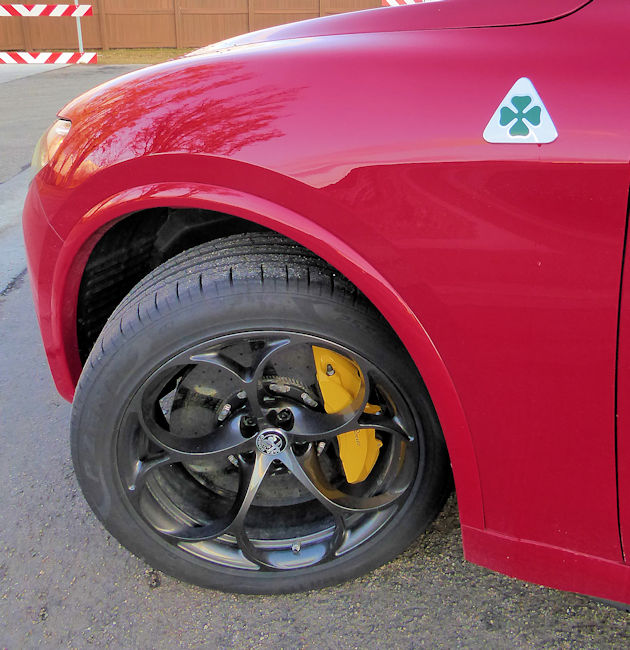 Notable Differences
Sure, there are a few noticeable differences, like the small triangular-shaped grille, the big yellow calipers on the brakes behind the unusual wide wheels, the four large exhaust outlets in the rear and the cute little shamrock badge on the front fenders.
There were a few other curious features on the inside the Alfa Romeo Stelvio Quadrifoglio, too – a red start/stop button attached to face of the steering wheel, real carbon fiber trim on the steering wheel, dash and center console and the knob mounted on the center console just to the right of the driver’s seat – labeled D – N – A & Race. 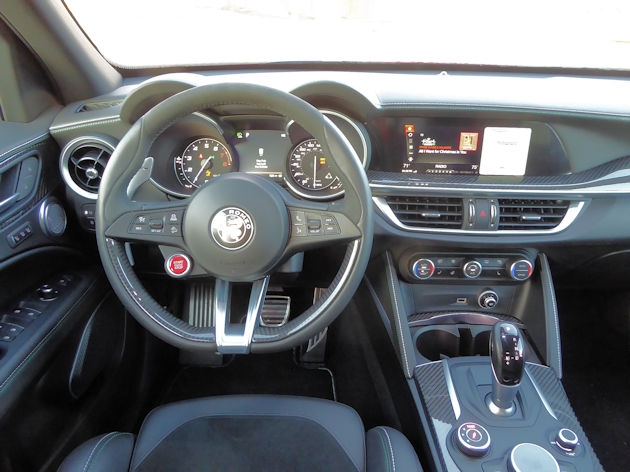 Drive Mode Selector
The knob turns out to be a Driving Mode Selector which allows the driver to tune the Stelvio’s temperament between Dynamic, Natural, Advance Efficiency and Race. Change the Driving Mode, and you change the way the engine, transmission, steering, suspension, brakes and accelerator respond. Even the exhaust note changes as selections change. For example, with the A and N modes it has a mellow mild-mannered sound from the four big outlets. But switch to Dynamic or Race and it sounds more like — a race car. 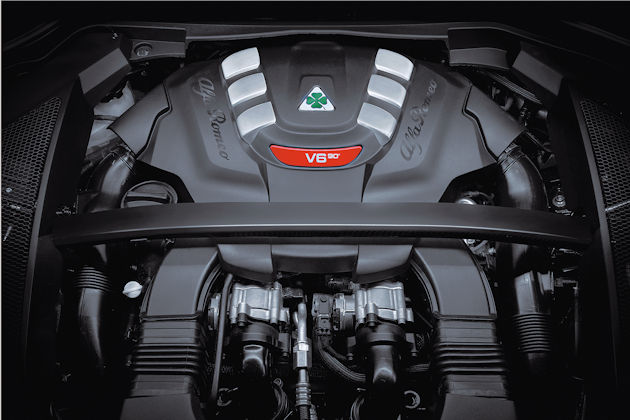 Race Setting
On the Race setting the engine activates an over boost function increasing the torque to 443 lb.ft. and the horsepower to 505. This amazing power comes from a twin-turbocharged 2.9-liter V-6 engine Ferrari-derived engine. 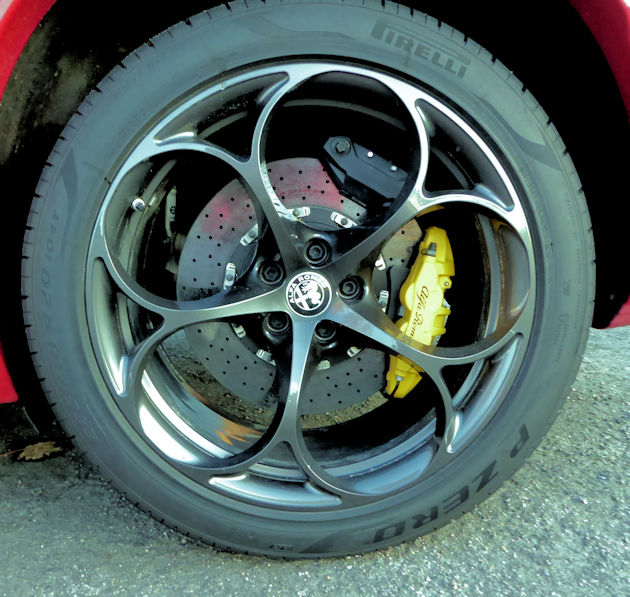 Carbon Ceramic Brembo Brakes
The drivetrain configuration also includes a precision eight-speed automatic transmission, a lightweight carbon fiber driveshaft and full-time all-wheel drive with Torque Vectoring Technology along with carbon ceramic Brembo brakes. Buff magazines list a 0 to 60 mph time at 3.4 seconds and Alfa says the top track speed is 176 mph. Plus the Alfa SUV lapped the famous Nürburgring racetrack (12.9 miles) in a record setting 7:51.7 minutes in 2017. That time is similar to that of cars like the Porsche 911 Turbo and the faster Corvettes. 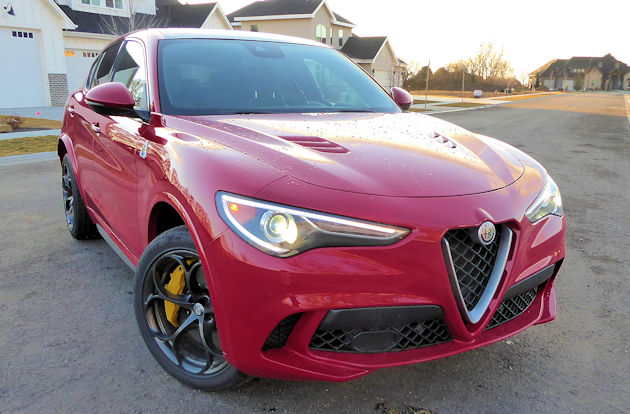 Fuel Economy
Fuel economy is 17 mpg city, 23 mpg highway and 19 mpg combined according to EPA estimates. We averaged 16.4 mpg according to the trip computer. It does have an automatic cylinder deactivation system to and auto stop system to help improve fuel economy, but let’s face it, this is not an economical SUV, it’s an exhilarating driver’s SUV. 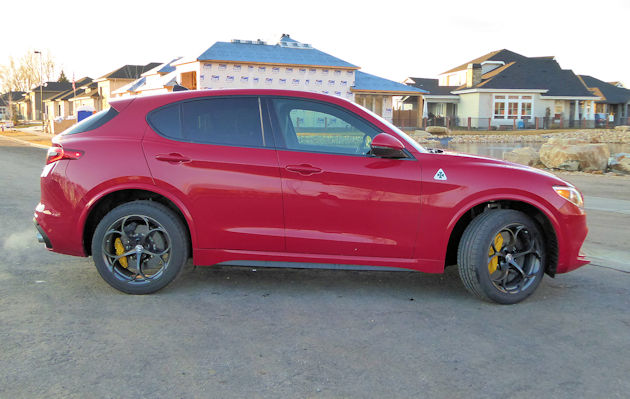 Near Perfect 50/50 Balance
The Alfa Stelvio is much more than fast, it also handles like a sports car thanks to its nearly perfect 50/50 front to rear balance, active four-wheel suspension system, and quick direct steering ratio.

Load with Luxury
Often performance models are often lacking in luxury features, but the Alfa Quadrifoglio we drove was well outfitted with most of the latest bells and whistle we love. Inside there are goodies like adjustable leather Alcantara® heated sport seats, heated steering wheel, Harman Kardon 14-speaker audio, navigation system, remote start, hands free power liftgate and dual-pane sunroof. The list is long. 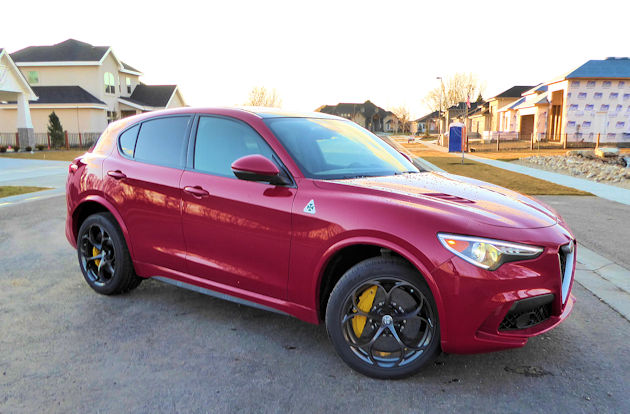 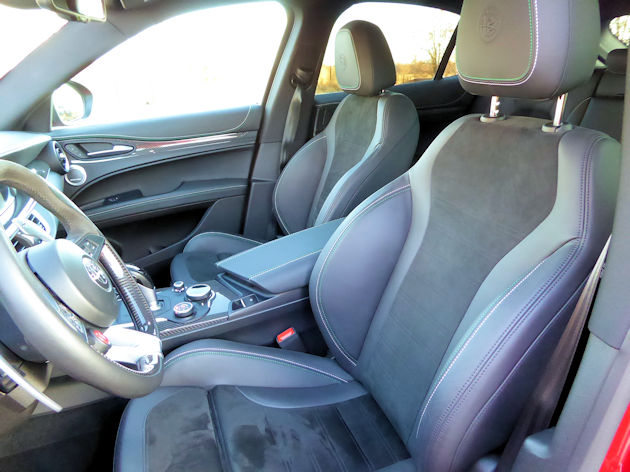 Six Trim Levels
There are six Alfa Romeo Stelvio trim levels including the top-of-the-line Quadrifoglio. You can buy a base model Alfa Stelvio with rear-wheel drive for as little as $40,545. I you want the Stelvio Quadrifoglio with 505-hp, all-wheel drive and long list of upgrades, the base price jumps to about $82,000. Add a few other optional packages including the $8,000 Carbon Ceramic Brembo brakes be prepared to spend up to $94,000 and some change. 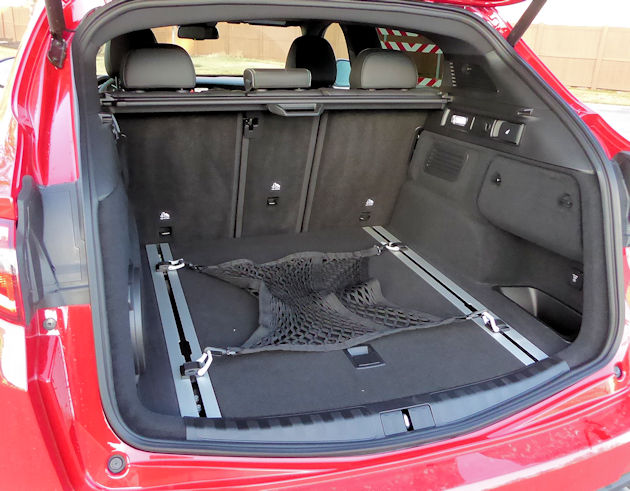 Racing Machine in SUV Clothing
But what you get for that price is an amazing racing-style machine in SUV clothing. It’s impressive, but it’s not for everyone, just those who want one of the most stylish and fastest SUVs in the world. And now we know that the cute four-leaf clover on the front fender of an Alfa indicates performance. 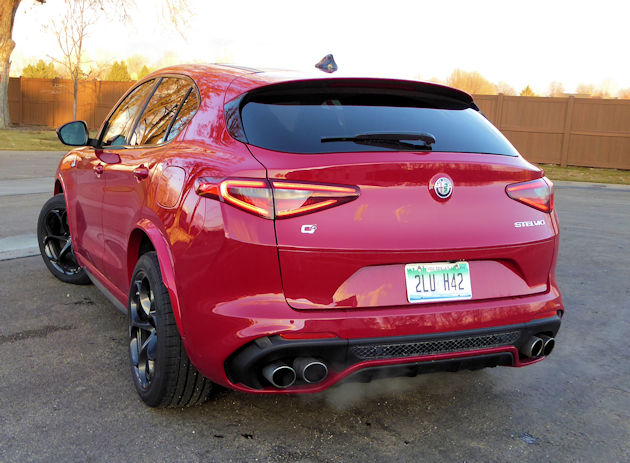 Conclusion
While it’s certainly entertaining to have all the performance at hand, we admit, the Stelvio Quadrifoglio is not something we like for a daily driver. Its comfortable and fairly quiet, but the ride is taunt, and it can get much more so on the Dynamic and Race settings. We also didn’t like that the drivetrain made banging sounds that sound like something is binding when the steering wheel was turned fully to make a sharp slow turn out of driveways or in a parking lot. We’ve experienced the same noise in several other four-wheel drive trucks and SUVs in the past and suspect it’s normal.
But for those who want a special SUV that you won’t see in every parking lot you should make a pilgrimage to your local Alpha Romeo dealer and check this one out.