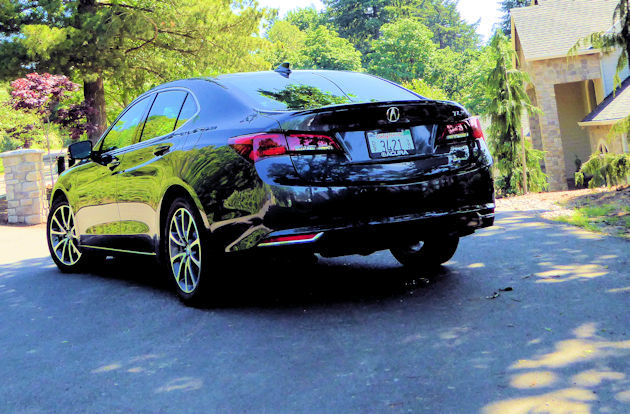 For many years, the Acura TL was a ?go to? car when someone asked that standard ?what would you recommend?? question — we always seemed to get that response when we identified ourselves as ?auto writers.?

The answer wasn?t because we thought it was the best car in the category, it was a safe answer because the car was well built, enjoyable to drive, comfortable and all the other attributes that make a good car value. There were cars that do things better or faster than the TL, but each required a compromise in price, comfort, dependability, etc. The Acura TL was safe, especially when we didn?t know the questioners likes and dislikes. 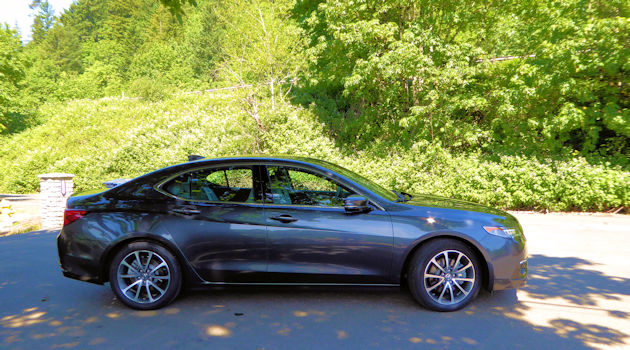 For the 2015 model year, Acura released an all-new model built from the ground up. It was created to replace the TL and the smaller TSX in something of an amalgamation of the two models. The plan was to have a car that better centered in the gap between the smallest Acura sedan, the ILX, and the flagship RDX — the new car was called the TLX.

By the yardstick, the TLX is about four-inches shorter and one-inch narrower than the TL, but the wheelbase is the same. It was also nearly five-inches longer and one-inch wider than the TSX. So, it is about the same size as targeted luxury competitors like the BMW 3 Series, Mercedes C-Class, Audi A4 and Lexus IS. 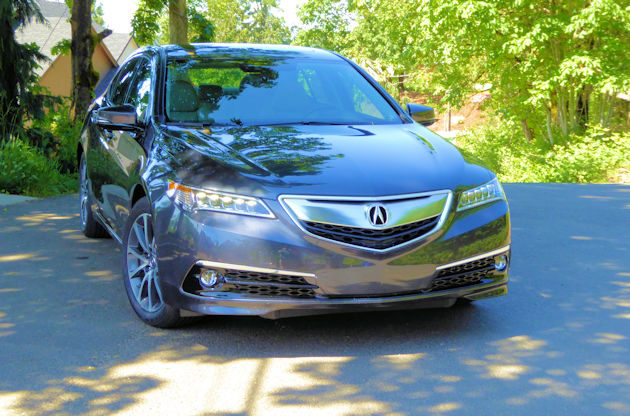 From a styling standpoint the Acura signature Jewel Eye? LED headlights steal the styling show with one of the most unique headlight treatments in the auto industry, and they just happen to provide a long, bright look down the road at night. Actually the entire front fascia has a clean new aerodynamic treatment with smaller grille areas, and of course Acura?s signature metallic ?wing? that tops the grille. The sides are sculpted with interesting new character lines that give the car the look of forward motion. The rear end has a short deck, large wrap-around taillights with a three-dimensional LED pipe light and a clean horizontal look that makes the car look wider. 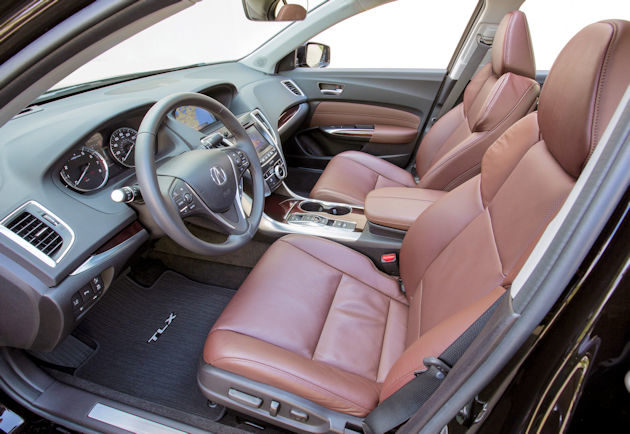 The interior, where owners spend their time, is outstanding. It?s filled with luxurious appointments, soft touch surfaces, excellent supportive seats and well thought-out controls. To make the occupants stay even more tuned in it is loaded with the latest technologies and an audiophile-quality entertainment system. 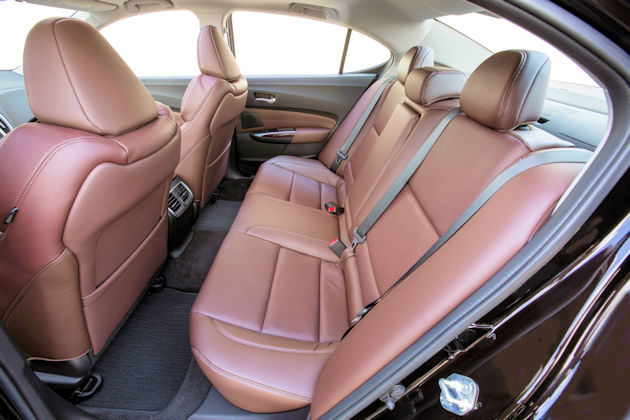 The center stack has a simple control system for inner-vehicle functions. It uses a two screen system with an upper eight-inch screen to provide data for the Navigation system, features like AcuraLink Real-Time Traffic and the backup camera. The screen is controlled by a large knob mounted just below the lower touch screen. The lower screen is a seven-inch touch screen used to control the climate, audio and some other vehicle functions. 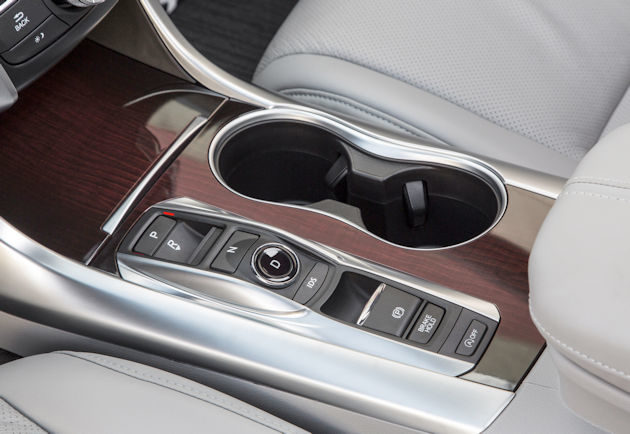 The traditional shifter on V-6 models is replaced by the advanced Electronic Gear Selector. It uses an instinctive push-button system to make the initial drive commands P-R-N-D and the steering wheel mounted paddle shifters to manually shift. The console also houses an electronic parking brake with an Automatic Brake Hold button which retains brake pressure when the vehicle is stopped ? this gives the driver better control on hills and allows he/she to take their foot of the brake without the car moving. 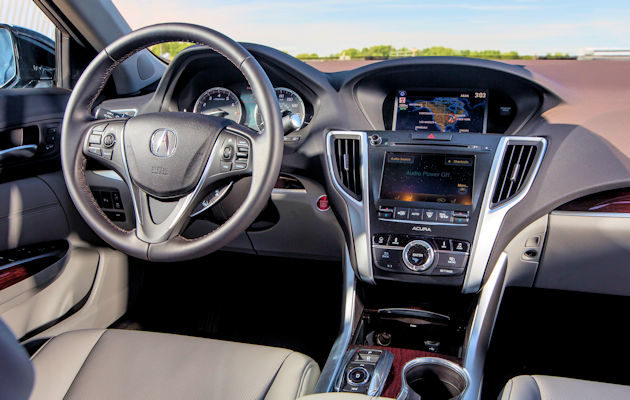 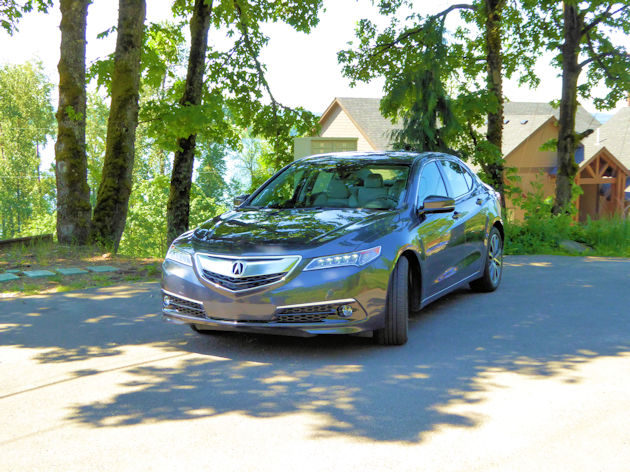 Under the hood the TLX is offered with a choice of either a 206-hp 2.4-liter i-VTEC four-cylinder with an eight-speed double-clutch transmission with torque converter or a 290-hp 3.5-liter i-VTEC V-6 with a nine-speed automatic transmission. These two engines and transmissions drive the front wheels and have Acura?s innovative P-AWS?. 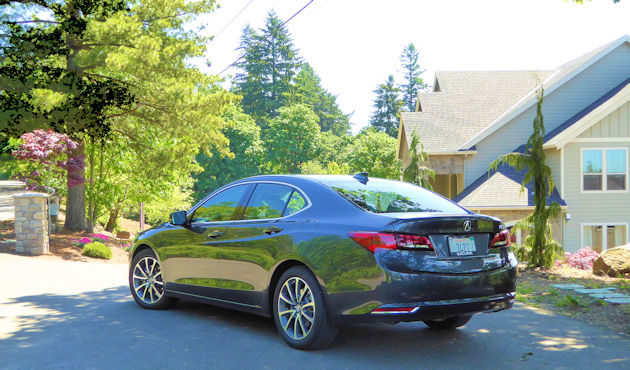 P-AWS improves the front-wheel drive vehicle?s agility at low speeds by turning the rear wheels in the opposite direction as the front wheels. At higher speeds the rear wheels turn the same direction as the front wheels for improved stability. Our test vehicle had the Super Handling – All-Wheel Drive system (SH-AWD) with Acura?s torque vectoring, which Acura pioneered. It provides the power to not only from axle to axle as needed, but also from side to side on the rear axle. 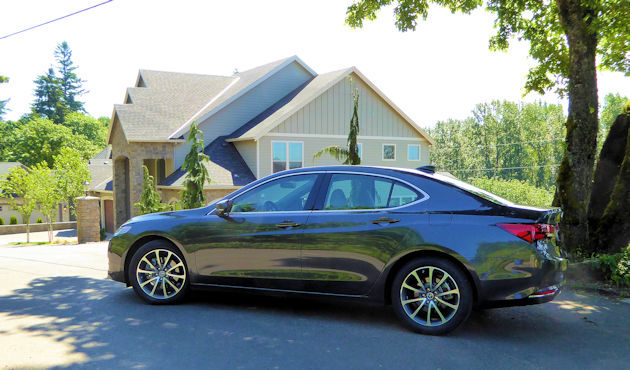 The ?Performance? element of the new TLX is cemented with updated engines and new transmissions. Acura had been slow entering the ?gear wars? but the new eight- and nine-speed automatics make a major leap forward. Both new transmissions are outstanding, and they make a significant difference in performance and fuel economy.

A standard feature on all the TLX versions is Integrated Dynamic System (IDS). Pushing the button on the center console cycles the system through four positions that change the complexion of the car?s handling and powertrain through four modes ? ECON, Normal, Sport and Sport+.

The Acura TLX comes in eight variations. We appreciate how easy the Acura decision making process is. You chose one of two engines, front- or all-wheel drive and do you want the Tech Package or Advance Package or both. The least you can spend is $32,615, including the destination charge for the four-cylinder. The highest price model is the TLX V-6 with AWD, and both packages for $45,940. The two option packages add a plethora of features including all the latest electronic safety and driver convenience aids, navigation and infotainment.

Like the TL we recommended as a safe choice for new car shoppers, the TLX takes the equation a bit farther. The TLX adds a new dimension of sportiness in the form of improved performance, handling and advanced technologies. It?s still a safe recommendation, but also a much more entertaining car to drive.