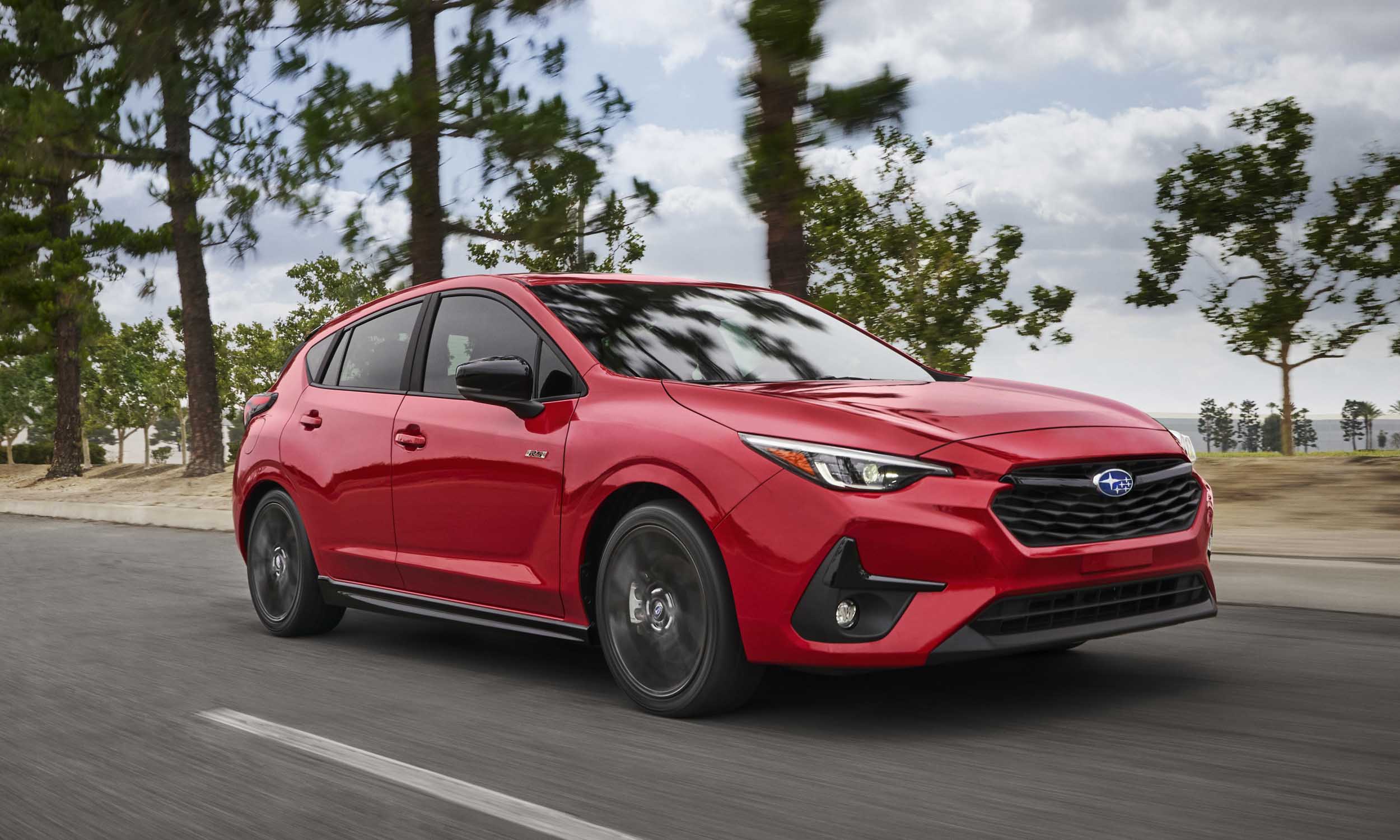 The Next Generation
It’s been 30 years since Subaru introduced the Impreza compact car to its lineup. Coincidentally, the 1993 Subaru Impreza debuted at the Los Angeles Auto Show, and now the automaker is using the same venue to introduce the all-new sixth-generation model. With a fresh design, upgraded performance and a range of updated safety and convenience features, the 2024 Subaru Impreza will arrive in showrooms early next year. 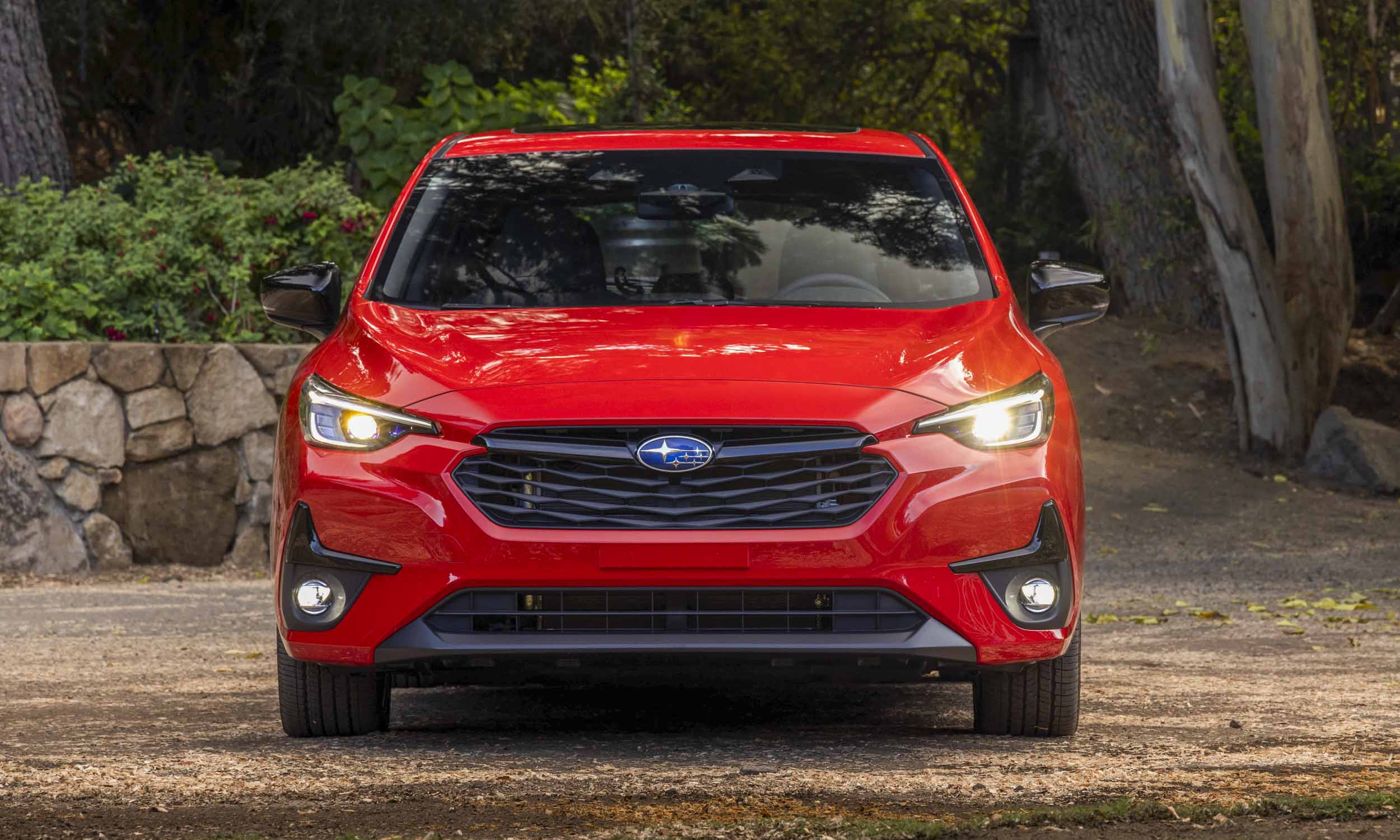 Updated Styling
The 2024 Subaru Impreza will be available exclusively as a 5-door hatchback — the 4-door sedan will not continue into the new generation. Styling changes are somewhat evolutionary. Up front, the grille as well as the lower air intake are both larger, which gives the new Impreza a wider-looking stance. This look gets further enhanced by new fog lights positioned at the far edges of the front fascia. Headlights are also new and feature signature daytime running lights similar to Subaru’s larger Outback crossover. 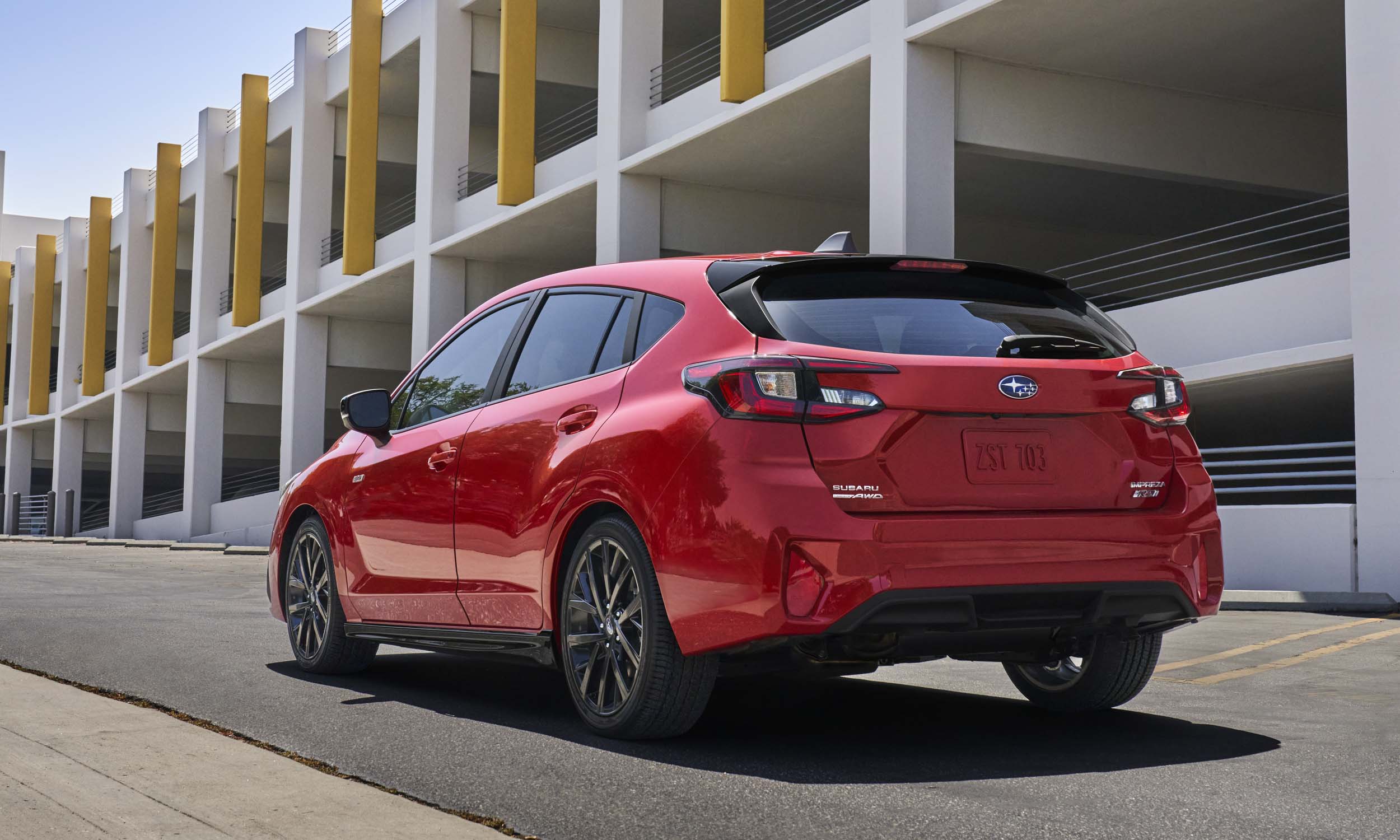 Rear View
At the rear of the 2024 Subaru Impreza appear updated taillights that have a more expressive design. The new generation also sports a new rear bumper. 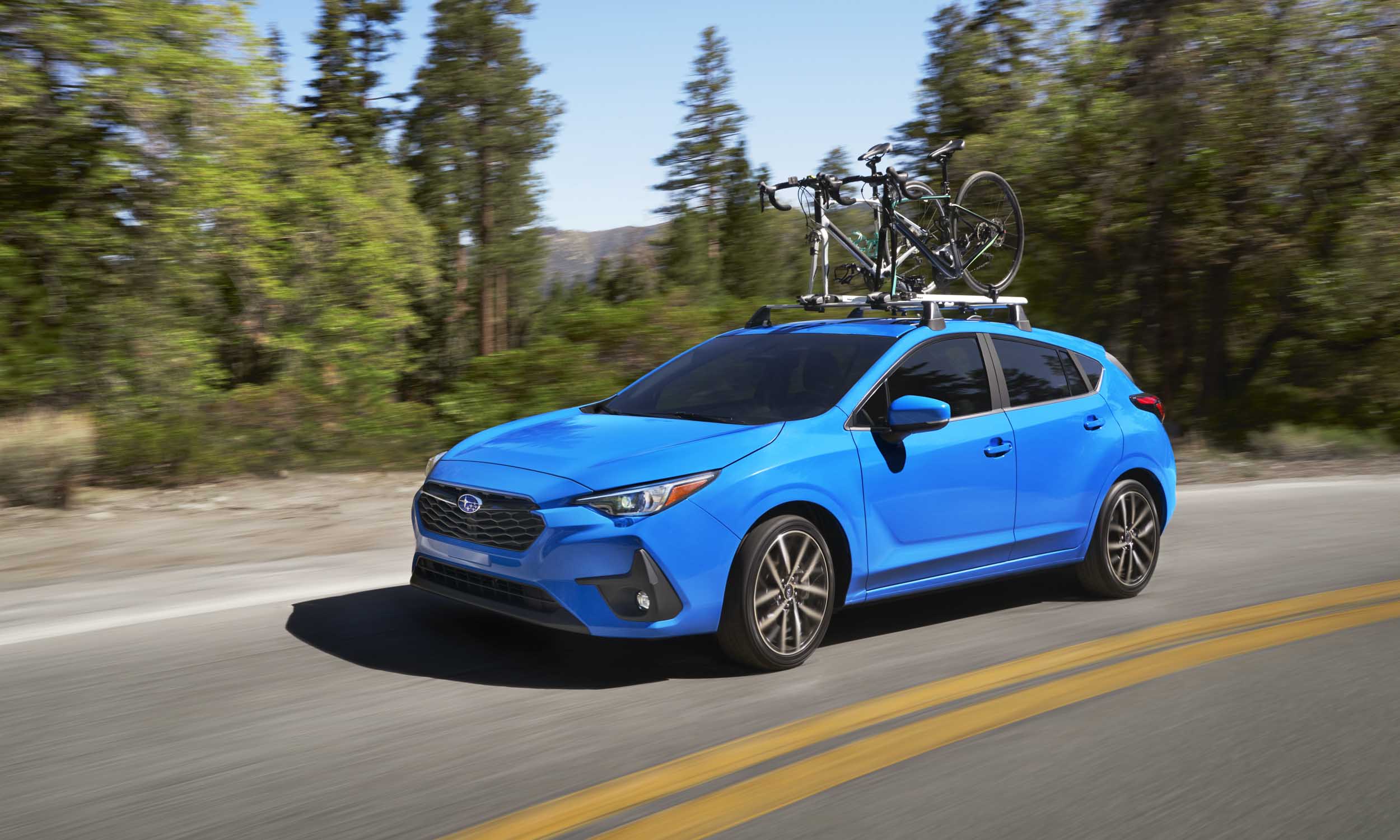 Under the Hood
The same engine in the fifth-gen Impreza — a 2.0-liter direct-injection Boxer unit producing 152 horsepower and 145 lb-ft of torque — powers the Base and Sport trims of the 2024 Subaru Impreza. A new RS trim upgrades to a 2.5-liter Boxer engine that generates 182 horsepower and 178 lb-ft of torque. Both engines get teamed with Subaru’s Lineartronic continuously variable transmission, and both the Sport and RS trims have an 8-speed manual mode engaged through steering-wheel-mounted paddle shifters. No manual gearbox will be offered in the Impreza for the 2024 model year. 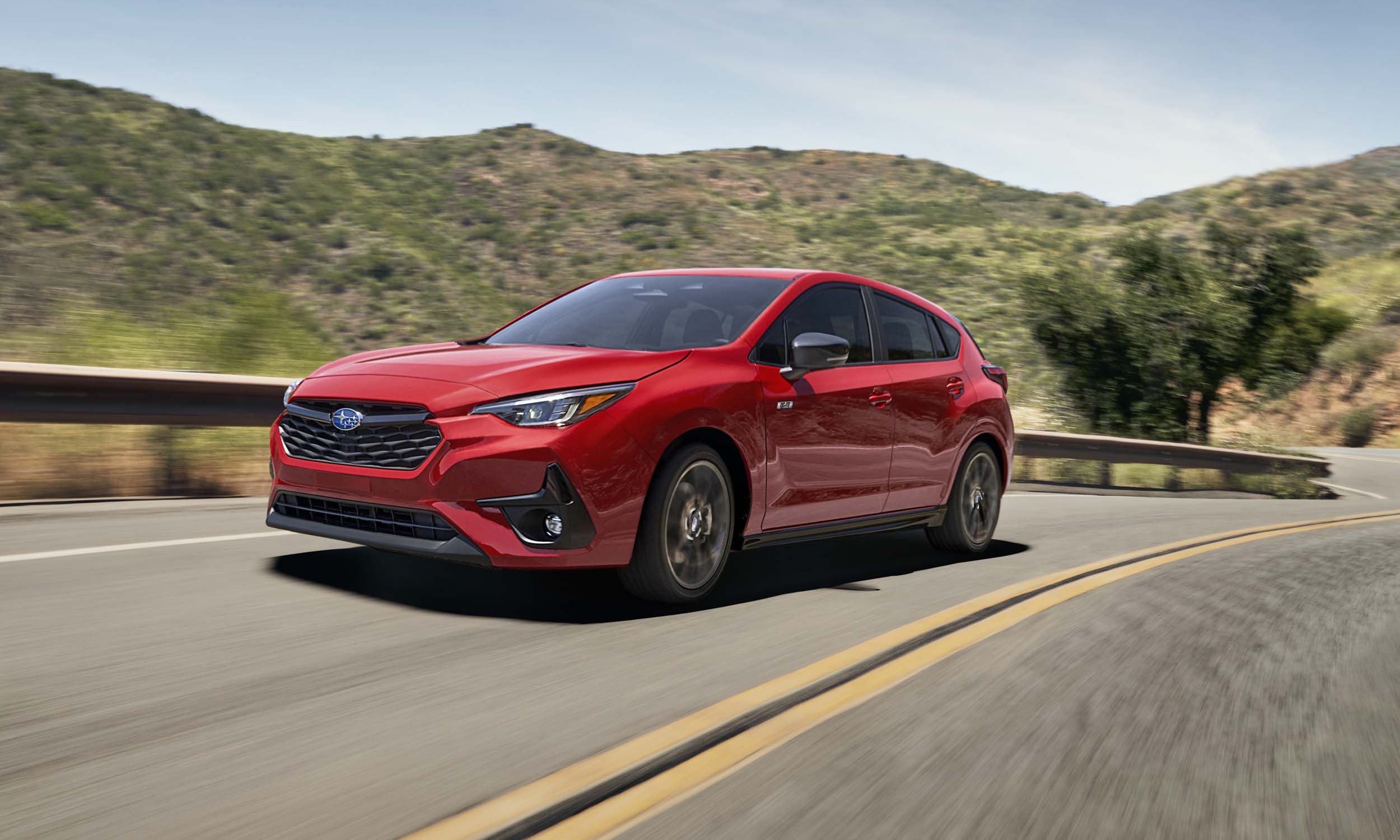 Improved Performance
The fifth-generation Impreza was the first model built on a new Subaru Global Platform. For this new version, the chassis has been upgraded, with torsional rigidity increased by 10 percent. This improvement is made possible thanks to a full inner frame construction and additional structural adhesives that also contribute to chassis rigidity (they also make the chassis lighter). The result should be a smoother ride with improved drivability. 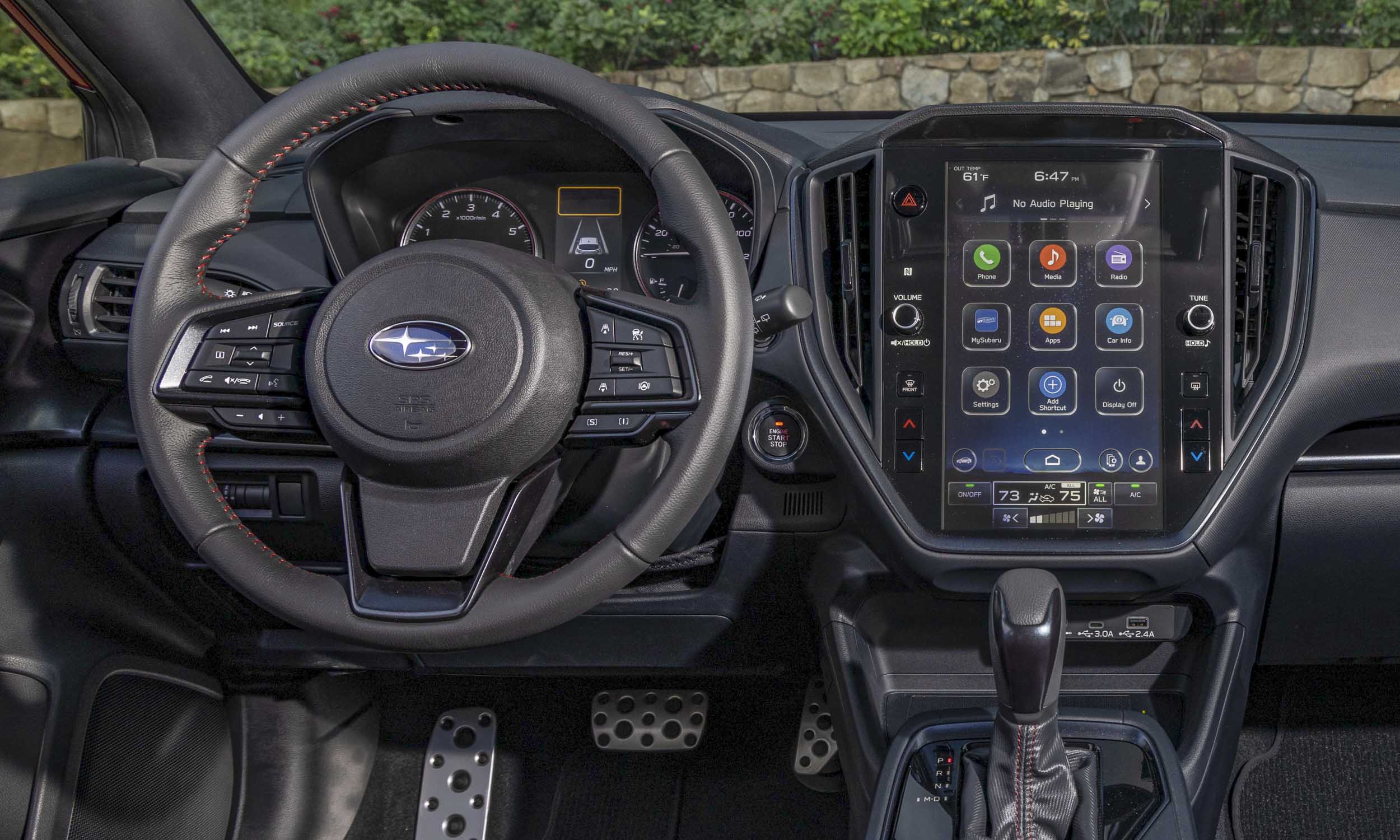 Upgraded Infotainment
For the first time, Subaru is offering its 11.6-inch vertical Multimedia Plus system in the Impreza. This upgraded infotainment system features wireless Apple CarPlay and Android Auto, both of which display in full screen. Large icons allow easy navigation, and with climate controls built into the display virtually all physical buttons have been eliminated. That said, we’re happy to see that engineers chose to retain volume and tuning knobs. The system also provides over-the-air updates. 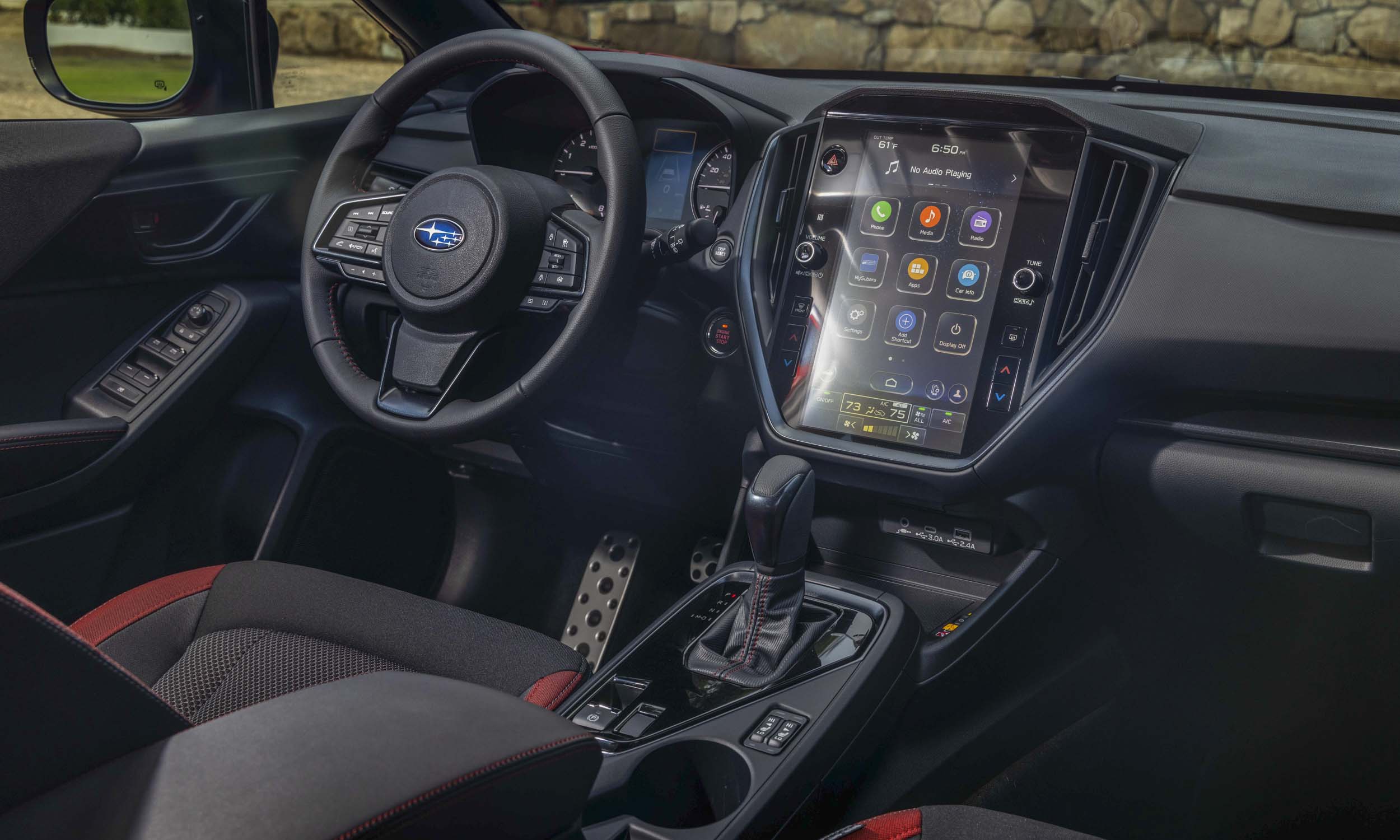 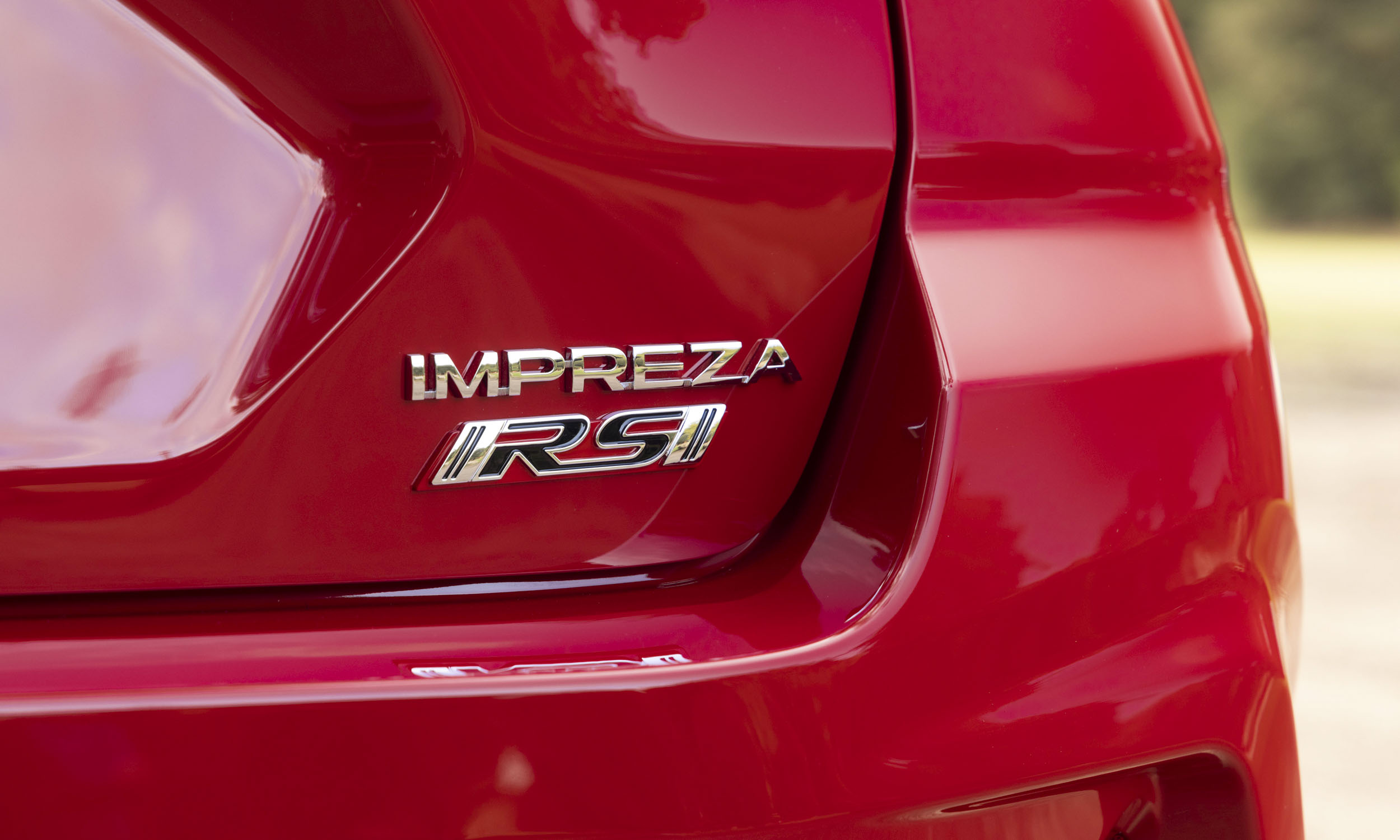 Impreza RS
In 1998 Subaru introduced a higher-performance version of the Impreza called the 2.5RS, which appeared before the rally-inspired WRX had arrived in America. Now the Japanese car company is bringing back this hot Impreza, now simply called RS. In addition to the more powerful engine, the 2024 Impreza RS stands out with black trim on the grille, side sills and mirrors, as well as 18-inch alloy wheels with a dark gray finish. LED headlights and fog lights are upgraded for the RS, and RS badging can be found on the doors and rear hatch. 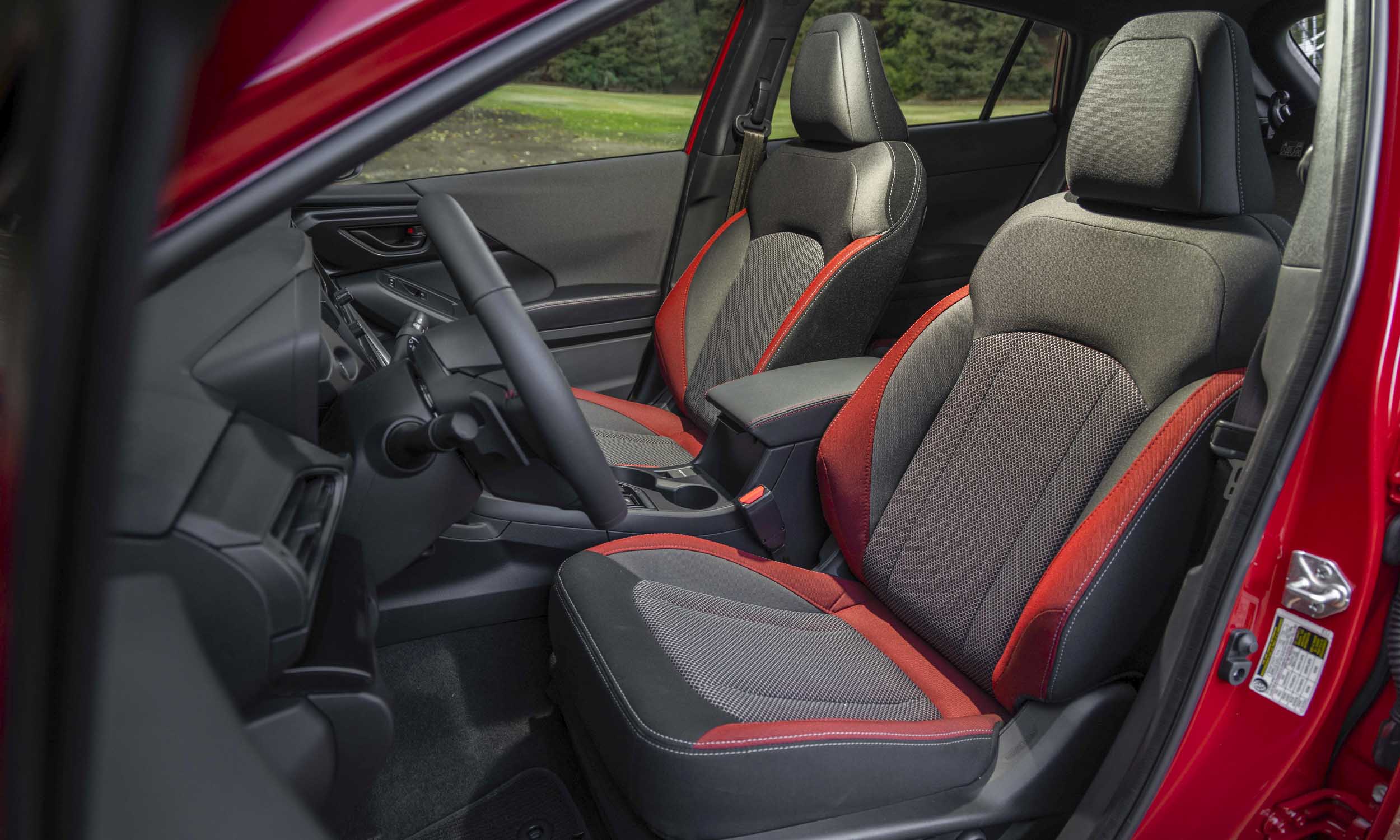 Sporty Interior
Subaru gives the Impreza RS a sporty interior to match the unique exterior styling. The front sport seats get trimmed in black cloth with red bolsters, and both the shifter and steering wheel are leather wrapped. The RS also has gunmetal and simulated carbon fiber accents, and aluminum alloy pedals contribute to the overall sporty looks. Other upgrades include heated front seats, rear USB charge ports, and an available Harmon Kardon 10-speaker audio system. 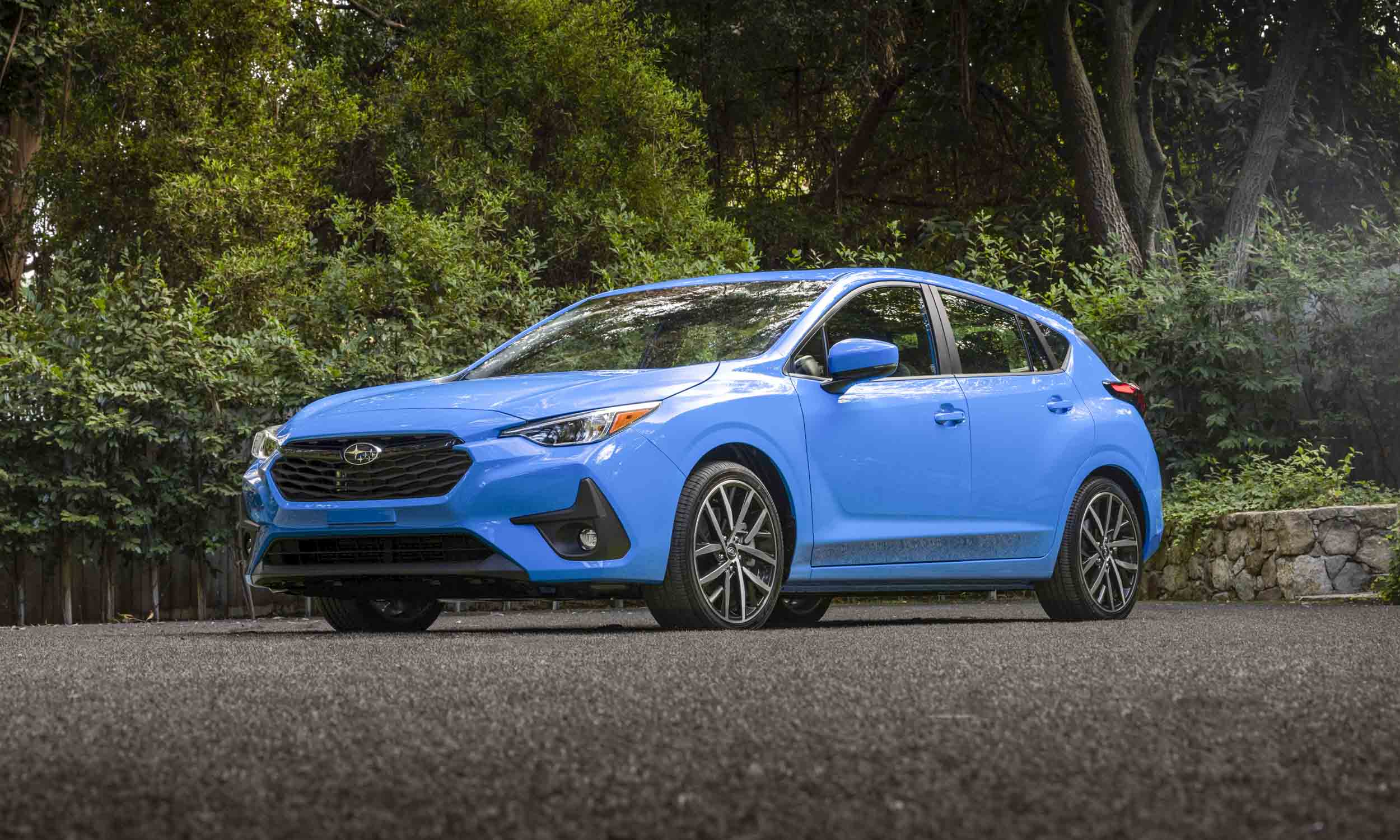 Safety
All 2024 Subaru Imprezas will come with the latest version of the brand’s EyeSight Driver Assist system. Upgraded to work under a wider range of conditions, the EyeSight system not only provides automatic emergency braking but now detects pedestrians and bicyclists sooner than before, and can alert the driver or apply the brakes as necessary to avoid collisions. Vehicles equipped with blind-spot detection now get automatic emergency steering that provides steering assistance to help avoid collisions at speeds less than 50 mph. 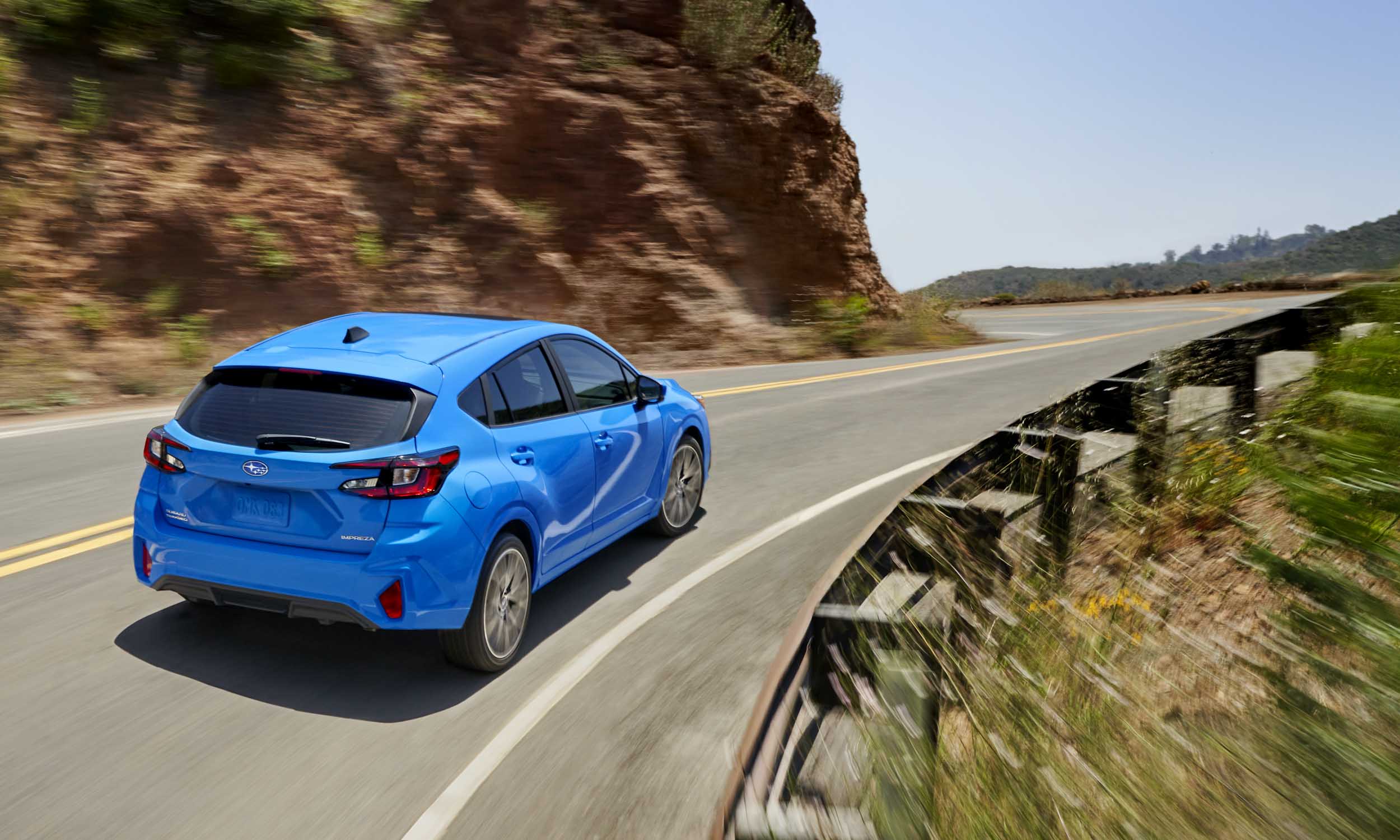 Coming Next Year
The 2024 Subaru Impreza will be offered in three trim levels: Base, Sport and the new RS trim. Produced at the Subaru manufacturing facility in Lafayette, Indiana, the new Impreza is expected to arrive in showrooms next spring. Look for pricing to be released closer to the on-sale date; however, we don’t anticipate a dramatic price increase from the current lineup. 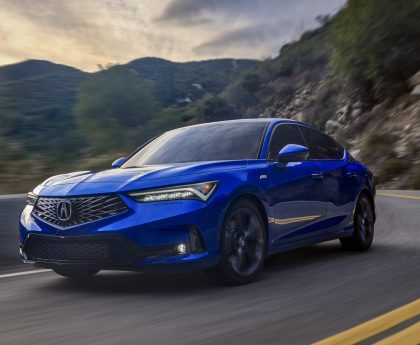 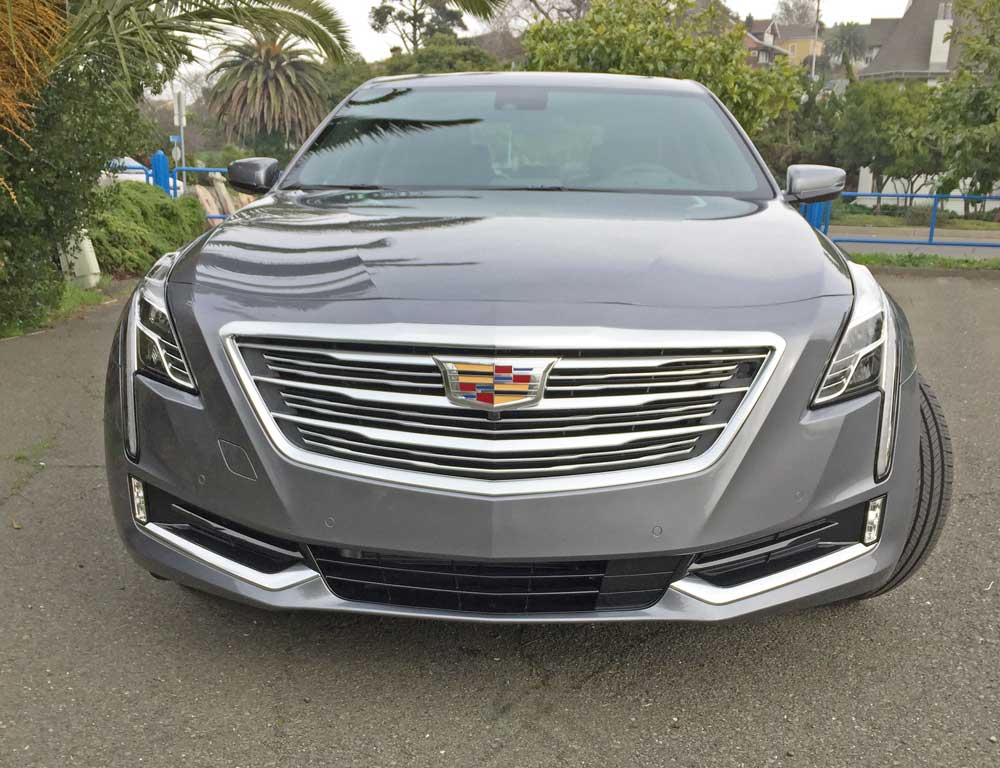